News of a lost Whooping Crane east of Ricardo in Kleberg County sent the Birder Patrol on a two-hour trek (from home) to find this special bird!  I personally was a little concerned because I had seen the initial record a week earlier but none since then, but the girls assured me that the bird had been reported the day before, so we all met at the Stripes in Combes, the group consisting of Billy and Sue, Norma, Laura, Peggy, Betty, and myself.  Due to an important project at home I had to plan to leave around noon (the rest were planning to eat at King’s Inn in Riviera after birding), so we took three cars and headed north, Billy riding with me and keeping the conversation going with fascinating stories about raptors around the world he had read about (seeing as we were seeing numerous Red-tailed and Harris’ Hawks on the way, not to mention Caracaras and Kestrels)!


We found FM 1118 (I overshot it and had to lead the crew around the block), and thankfully we didn’t have to go far before we found a wetland on the north side of the road with several Sandhill Cranes, and in with them was the big white Whooper!  They were behind the vegetation so photo ops weren’t the greatest, but in addition to the cranes we had gobs of other nice birds, including Black-bellied Whistling and Mottled Ducks, White Ibis (with one Plegadis that we were trying to turn into a Glossy but weren’t convinced it wasn’t an immature bird, which is basically identical to immature White-faced), a Roseate Spoonbill, and a pair of White-tailed Hawks circling!  The others saw some Blue-winged Teal that I missed, and in the songbird department we added a pair of Vermilion Flycatchers, a calling Kiskadee, an Eastern Phoebe, and Billy heard Green Jays earlier.  Just before we left we had a large flock of Snipe (!) go zipping by, and several White-fronted Geese came sailing in!  A little further down the road the Sandhills were more visible, and they put on a great show!

The gang enjoys a lost Whooping Crane (below) hanging with the more common Sandhills! 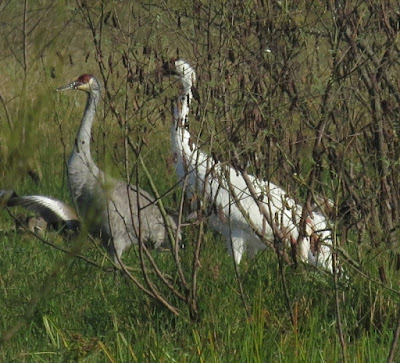 (He was content to stay somewhat hidden behind the vegetation...) 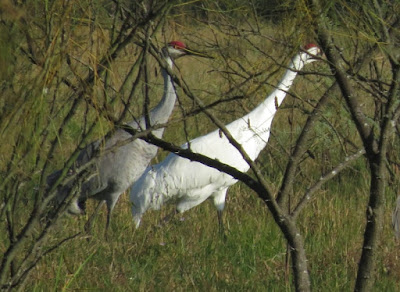 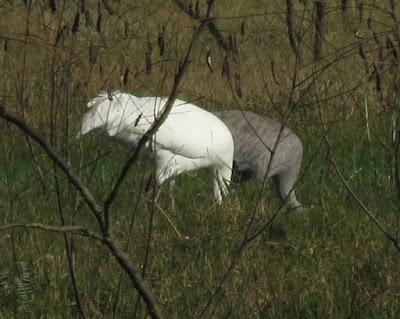 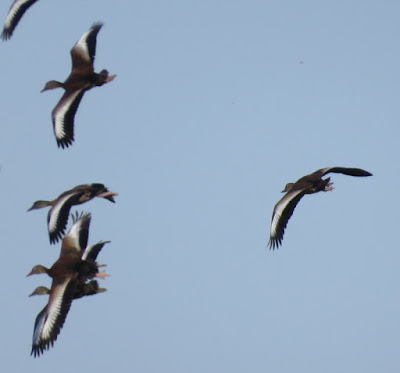 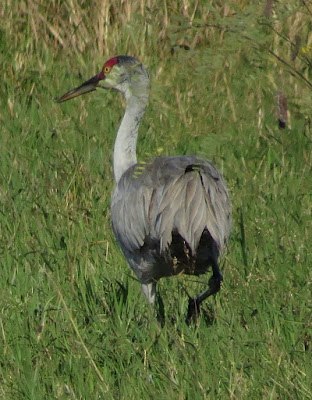 The Sandhill Cranes were much more cooperative for photos! 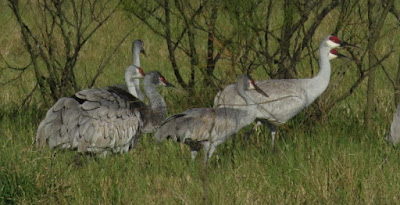 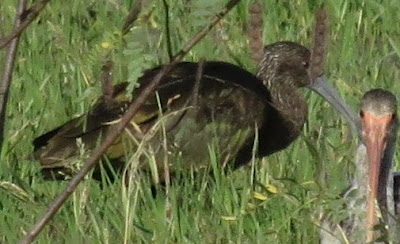 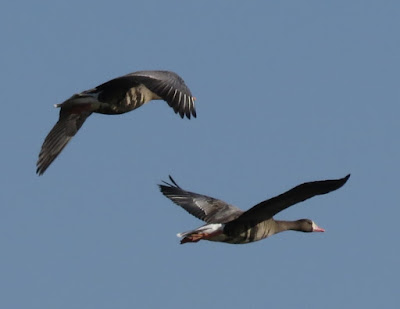 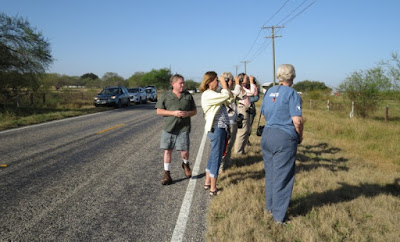 After finally dragging ourselves away we went down to Riviera and to the Kaufer-Hubert Memorial Park area, first stopping along the road to check out the Baffin Bay cutoff on either side.  Here we picked up both Black-necked Stilts and Avocets, Short-billed (presumably) Dowitchers, lots of Least Sandpipers, and various terns.  Someone found more Snipe hidden in a little island of grass also occupied by several Killdeer, and surprisingly the only gull to show up at that point was Ring-billed.  A Savannah Sparrow hopped up on a wire which afforded a good conversation about sparrow ID. 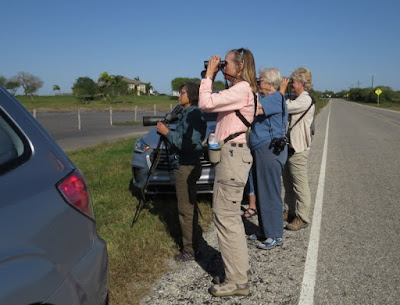 The gang at the Baffin Bay Cutoff (below)

From there we wheeled into the actual park, where several White Pelicans lazed on the shore like so many pillows!  Brown Pelicans lined the jetties, and Billy spotted an accipiter that jumped up into one of the trees and then took off across our view!  Our gut impression was Cooper’s, but the carload in front of us thought it was a Merlin, so there was a little discussion when we later got out of the cars for a restroom break!  In the RV park we cruised around and added some Ruddy Ducks and a flock of American Pipits, but that was pretty much the excitement there. 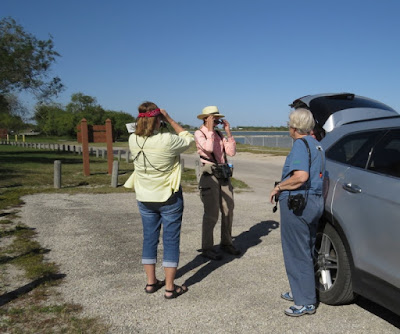 Sue and Betty check out the bay at Kaufer-Hubert Park 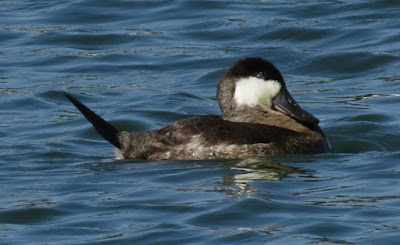 After wrapping that up the crew headed to King’s Inn earlier than I expected, so I went ahead and joined them for a scrumptious family-style meal of frog legs, shrimp, fish, fries, and onion rings! J  I took off after that, and including all the birds seen in transit, we had 59 species for the morning (four of which I missed)!  The excitement for me wasn’t over when I got home, as the butterfly garden was alive with Queens and other common stuff, but also a Tropical Buckeye! 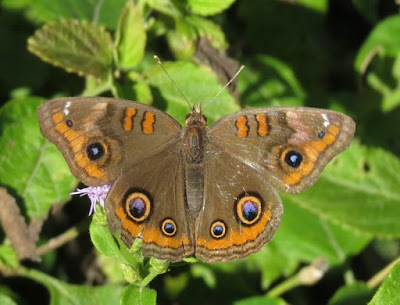 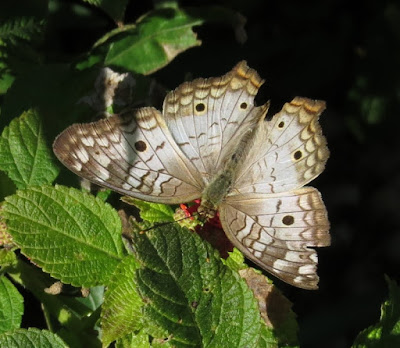 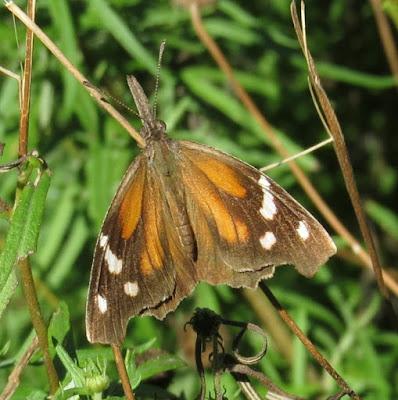 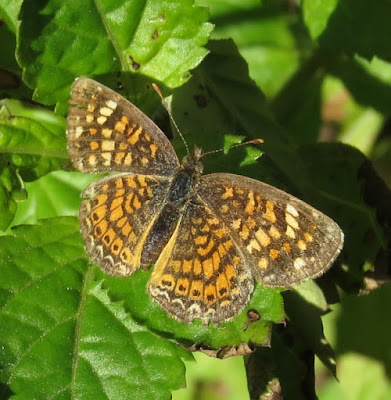 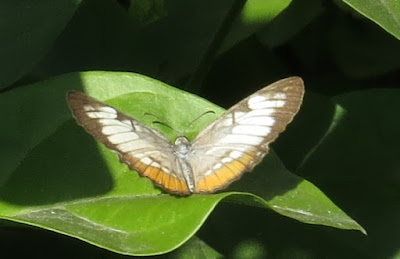 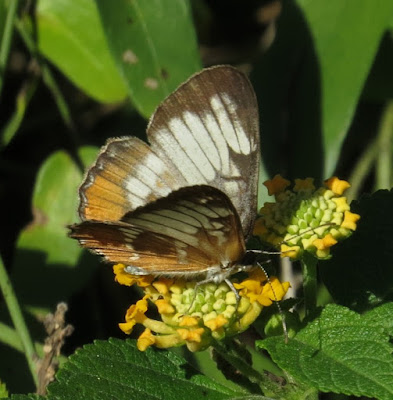 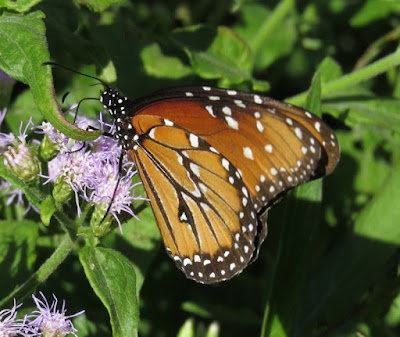 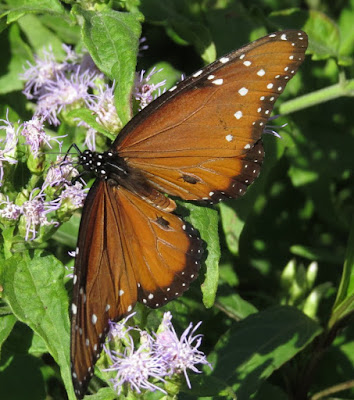