A Final Push for a Great Year

Barbara from the Hill Country was making a last-minute run to the Valley to bag some needed targets for the year, so she contacted me with her eBird “need” list, I whipped up an itinerary, and away we went!  Her “wants” technically covered the whole Valley from east to west, so we prioritized what she really wanted; although she had tried for the Roadside Hawk and dipped, she did bag the Green Parakeets on 10th, but a good number of her potentials were actually out in Cameron County, so she requested to head that direction first.


Tiocano Lake was right on the way, so seeing as King Rail was one of her targets (and heard-only was fine), we wheeled up there first.  It was a beautiful day, and while trying to avoid being run over by morning commuters, we heard the rail right away, along with a Least Bittern!  A flock of White-fronted Geese took off behind us, and we quickly added the expected marshy birds which included several ducks, Roseate Spoonbill, Black-crowned Night Heron, and both cormorant species. 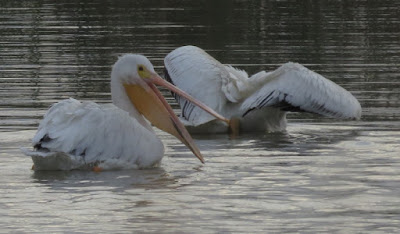 White Pelicans sailing off into the sunrise...

From there we headed over to Justin LeClaire’s house for a chance at the returning Allen’s Hummingbird; since we were chasing several things, we agreed to give it 15 minutes max, but in that time we picked up a lot of nice suburban birds such as Black-crested Titmouse, Ruby-crowned Kinglet, Green Jays, and a Yellow-throated Warbler that Barbara got on!  Just before we left a Buff-bellied Hummer came in, but no Allen’s, so we let “Ciri” lead us to the next stop, which was Share 27 Road northeast of Los Fresnos.


Well.  She definitely took us the back way and we ended up on a dead end road out in the boonies (turns out she led us to the north end of Share 27 Road), but it was not for naught as Barbara spotted a small group of Groove-billed Anis, along with an uncharacteristically friendly Olive Sparrow!  As we headed south towards where the Fork-tailed Flycatcher had been reported, we crossed a resaca that had several ducks and a Spotted Sandpiper, but also a lone Ross’ Goose!  That was special, as my usual view around here is trying to pick out the smaller bird in a flock of Snow Geese flying overhead! J  A little further down at another resaca, a Ringed Kingfisher sat on a wire, and an American Robin was in a tree in someone’s yard!  We both agreed this was a pretty birdy road! 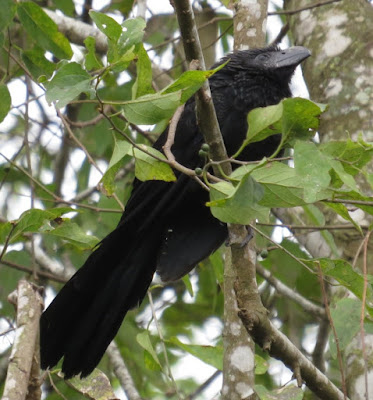 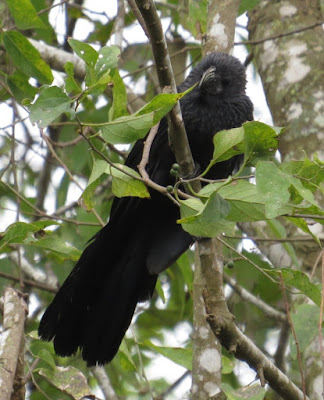 Here you can actually see the grooves! 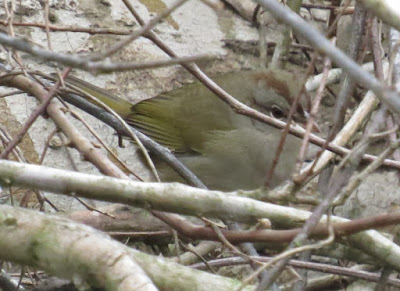 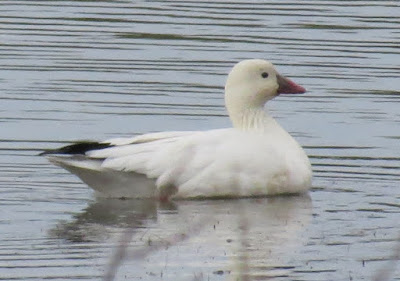 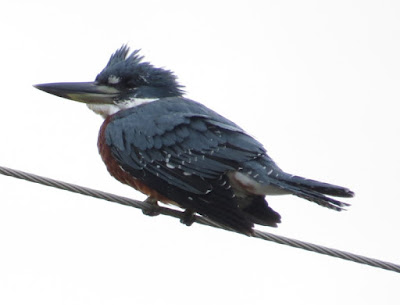 Continuing south, we finally got to the intersection where the flycatcher had been hanging out, and while the habitat looked perfect (exactly where I would expect to see one in Belize), we could find nothing but shrikes, starlings, and grackles (oh, we did spot a couple of Inca Doves in someone’s driveway…).  So from there we headed east on SR 100, stopping at both the Blue Shack and the official Aplomado Viewing Area, enjoying lovely White-tailed Hawks and a distant White-tailed Kite, but no falcon…


So we headed straight to the Island from there (a report of a Tamaulipas Crow flying over SR 48 came through about then, but we figured that was a real long shot) and went to The Flats as, although none had been reported, Common Tern and Red Knot were also targets, so we risked taking a look.  We had great looks at the usual suspects (the beach was in great shape for driving), including my FOS Red-breasted Mergansers out in the bay and a Greater Yellowlegs poking around, but nothing out of the ordinary (we did spot the oddball Reddish Egret with the few white flight feathers). 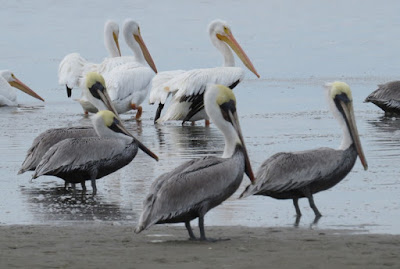 White and Brown Pelicans together

White Pelicans (one starting to go for an itch) 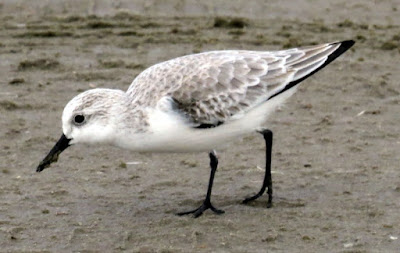 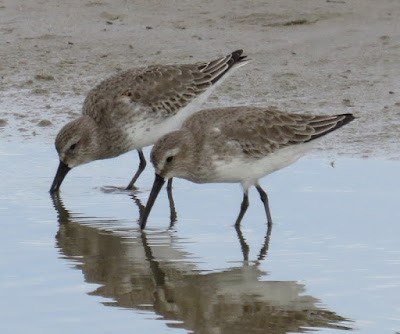 American Bittern was also on her hit list, and since one had been reported over at the Birding Center the previous week, that was the next stop, but I talked Barbara into checking the Convention Centre first, as historically we’ve spotted more there.  Well, again!  Pulling up into the first open spot along the “circular area”, what should be feeding in the grass next to us but an adult male Black-headed Grosbeak!!  Barbara didn’t need it for the year, but that was the bird of the day as far as I was concerned! J  A Catbird also fed in the grass, which was fun. 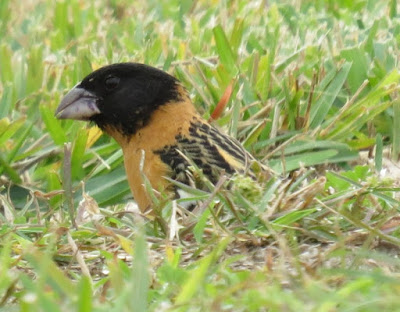 We hit the boardwalk after that, not nailing a bittern but enjoying Barbara’s favorite duck, the Northern Pintail!  A nice Yellow-crowned Night Heron was at the end of the “marshy” boardwalk (where the friendly gallinule is usually hanging out), and a Swamp Sparrow called from the reeds on the “Birding Center” side, but about that time she got a text from another couple of guys (who also happened to be staying at the Inn) that they had just spotted two Aplomado Falcons right where we had just been (at the viewing area along 100), so off we went!  The barrier in the middle of the highway kept us from turning into the parking area, but we pulled off the road across from the hacking station, and saw a falcon-shaped blob on the left side of the thing; even through the scope I couldn’t get any detail, but that was good enough for Barbara, so it was off to Anzalduas for the Sprague’s Pipit!

Barbara on the boardwalk 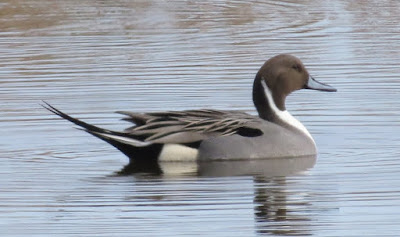 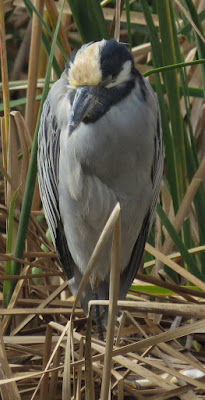 Barbara was a little more anxious to get this one as it would have been a life bird for her, so I was pretty confident we’d kick one up, but for the first time in my experience (this time of year, anyway), we criss-crossed that field several times and not one pipit!!  (Lots of Western Meadowlarks, though, along with a Yellow-bellied Sapsucker calling in the background…)  Over at the river we flushed some Least Sandpipers and a couple of Snipes, Ospreys were about, and the scaup flock was back, but not even any kingfishers showed this time.  Disappointed but not discouraged, we made the rounds and spotted a group of birders looking at something near the maintenance area, where I heard a Beardless Tyrannulet call!  We headed over there, spotting a Vermilion Flycatcher in the process, and it turned out to be a group from Vermont that Barbara had run into the previous day at the Roadside Hawk spot!  They were indeed trying to track down the tyrannulet, but we also heard American Goldfinches, and Barbara spotted one of the resident House Finches!  When one of the ladies mentioned that someone had seen the Hook-billed Kites on the levee for a good long time that morning, Barbara said, “Let’s go!” and we were off again! 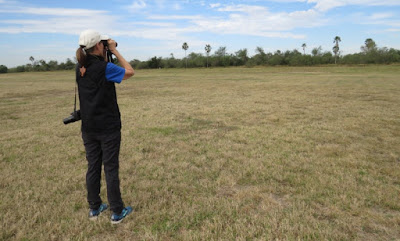 Looking for that elusive Sprague's Pipit 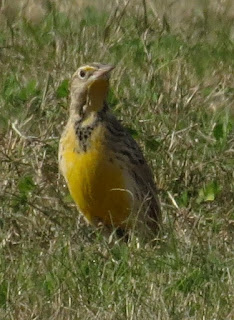 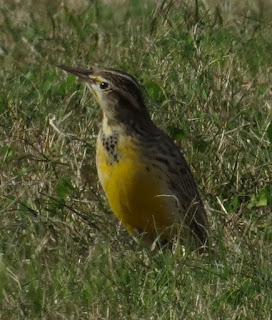 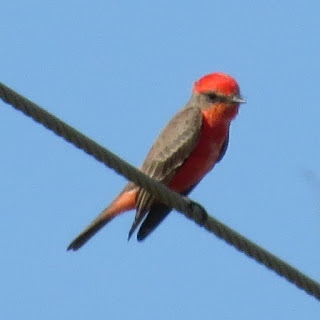 Barbara had also seen a report of the Roadside Hawk along the levee well east of the butterfly garden, so we got up there east of the Riverside Club and headed down (being warned to be careful by another friendly Border Patrol guy as they were chasing down some drug runners at the moment), but no hawk.  We did catch sight of a flock of about 50 Green Parakeets near the church, which was really great!  We headed down the road west of the Butterfly Center and took the canal road down to where we saw another car parked; turned out to be my friend Rick, who had initially gotten such great shots of the kites!  He was shooting the family group of anis that had been hanging around for at least a week, so we told him of the kite report and headed west down the levee.  Nothing but a Harris’ Hawk and a friendly Ladder-backed Woodpecker, but we at least got some exercise…  By the time we got back to Rick the gang from Vermont had shown up, but the ladies were down closer to the Center and reported that “the hawk” just flew into the Center!  So we blasted over there, threw our money at Luciano J and headed down to the old garden, scaring up a White-tipped Dove in the process.  No hawk (and Grays had been reported, so we weren’t sure exactly what had been seen), but we at least added the cute little Screech Owl to the list, an Altamira Oriole sitting in the doorway of the old Visitor Center building, and Barbara got a glimpse of the Clay-colored Thrush at the feeder area that Rick pointed out!

The levee south of the BP Corrals 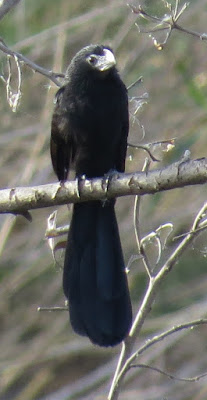 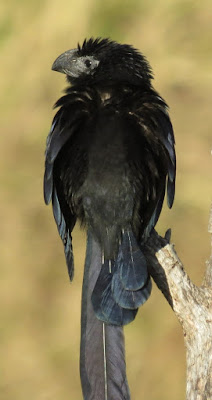 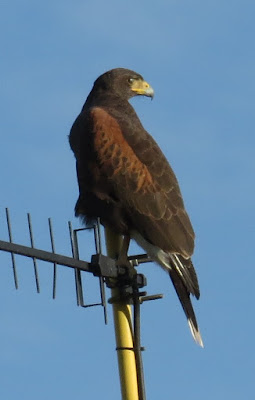 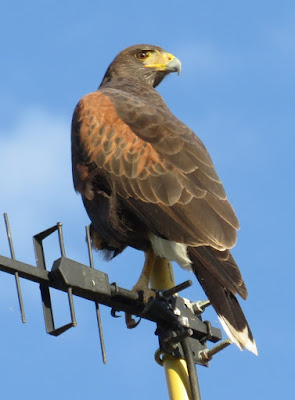 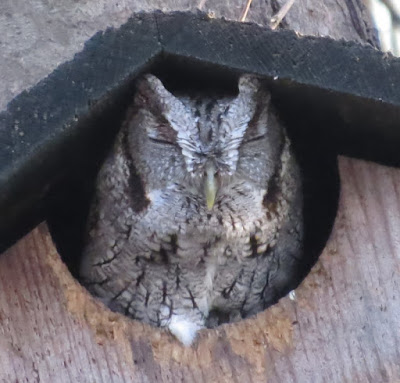 Since they were getting ready to close up, we decided to head home after that, shooting a very cooperative Cooper’s Hawk on the pole (at least until Barbara tried to get her own picture L), but on the way home I asked Barbara if she wanted to at least try for the Yellow-headed and Lilac-crowned Parrots, seeing as we were passing the area in McAllen where they had been reported in the past, so we swung off on McColl and headed up to Cynthia.  Unfortunately that proved to be a bust as well except for the tittering Tropical Kingbird… 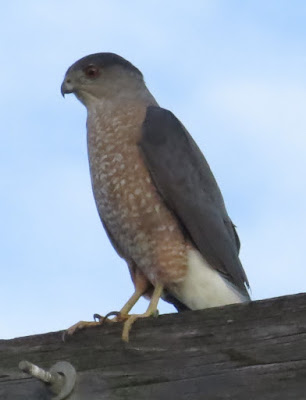 We headed home for real after that, but wound up with a grand total of 115 species!  Bird List: