Andy and Mariana had visited south Texas once before, and wanted to see some “new places”, so I suggested some places “out west” as Brownsville had been their focus previously.  They didn’t seem to have a target list, but I finally weaseled some suggestions out of him, such as owls, kingfishers, rails, and bitterns!  My boss Keith was planning on taking them on a night walk, so that would take care of most of the nocturnal stuff, but a daytime possibility was Burrowing Owl, so I picked them up from where they were staying in Sharyland and we headed south to Granjeño!  Ironically they had gone down there themselves the evening before (where apparently a pretty good party was happening at the restaurant there) and had no idea that’s where the owls were!  By a miracle we actually spotted one in the rocks, so after enjoying him we quickly packed up and headed on to the “Roadside Hawk Spot”! 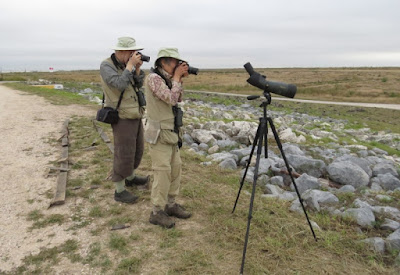 Andy and Mariana shoot the Burrowing Owl (below) 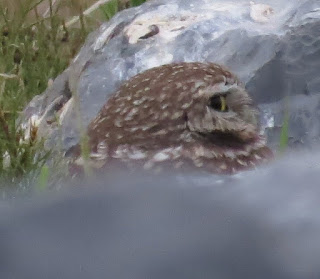 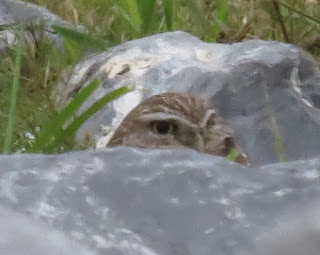 Peeking shyly from behind the rocks...

My friends Pat, Joyce, and Sherolyn had gone there Saturday, and not only saw the hawk but (thanks to another friend Rick) three Hook-billed Kites soaring overhead!  Pat directed me to walk down a road towards the levee, where there was a bridge from where they actually saw the hawk, but this time the hawk didn’t wanna play ball; there were several other birders there, with “very sad faces” as Mariana noted!  A troupe of Green Jays gave great looks, a Black Phoebe finally posed for us, and a tree-full of Lesser Goldfinches were all happy finds for these Pennsylvanians, but even on the levee the only raptors we spotted were Redtails, harriers, vultures, and three Caracaras that put on a great show chasing each other!  We did hear a couple of Groove-billed Anis (that had been previously reported), but upon finding out that Andy and Mariana had traveled extensively in the tropics (particularly Costa Rica), it turns out that not only was the ani not a life bird, but neither was the Roadside Hawk!  (Yes, the Black Phoebe and Lesser Goldfinches were more exciting! J)  The kites would have been exciting all around, but alas, they never showed…  An unspottable Altamira Oriole called in the distance as well, but I assured them (and hopefully it will really come to pass) that they’d get great looks at Salineño on Wednesday! 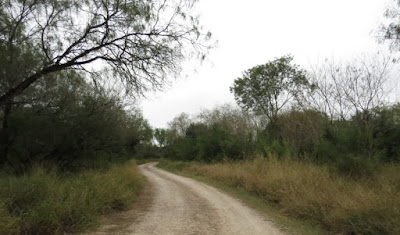 [Ed. note:  Since this narrative was written, there was considerable confusion as to whether the connector road (pictured above) between the corrals and the levee was actually open to the public; FWS has clarified that it is indeed CLOSED to the public.] 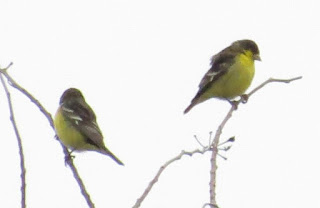 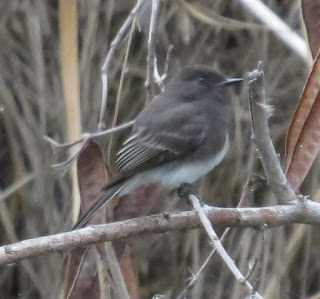 They had also visited Anzalduas the previous day, but dipped on the coveted kingfishers, and upon hearing about the possibility of Sprague’s Pipit, they were game for a repeat visit!  So we swung back in, the Constable et al waving us through (I had forgotten it was Monday where you don’t pay), and after a bee-line to the restrooms, Mariana was unfortunately the only one to miss the Gray Hawk making a brief appearance over the trees… L  We circled the loop, picking up a handsome Caracara on a dead tree (Andy got some great shots as he took off), some teal in the river, and a Vermilion Flycatcher near the dam, but it was pretty quiet. 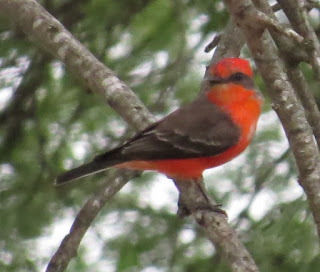 We finally made it to the parking area and started the trek across the field, and hadn’t gone far before I heard a Sprague’s flying overhead somewhere, but we could never spot it.  We started toward the general area the bird went (by the sound of it), hearing an American Pipit going over as well.  We wanted to eventually get to the river anyway where we could scope for stuff, but just before we got there the Sprague’s jumped up ahead of us!  Mariana got a good look, but unfortunately Andy never got on it, but he at least heard the thing… (That got us going on various frustrating “not being able to see the bird” stories…)  We consoled ourselves with the flock of Western Meadowlarks that were more cooperative for views!   But in the middle of all this a Ringed Kingfisher let loose, and he eventually flew way up high overhead before coming back down, and thankfully Mariane saw where he landed!  He was pretty distant, and the heat waves were starting to manifest themselves, so while we got scope views, you kind of had to use your imagination!  Also at that spot we enjoyed an Osprey eating lunch, a raft of Scaup and Ring-necked Ducks, and the ubiquitous Coots. 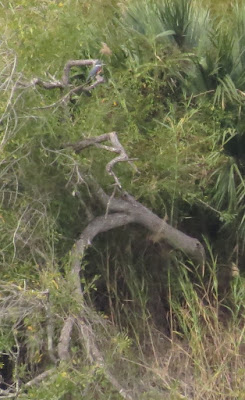 Can you spot the Ringed Kingfisher? 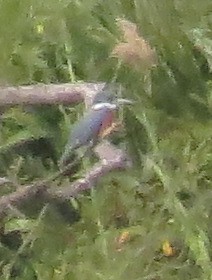 From there we headed up to Edinburg Scenic Wetlands for another crack at the kingfishers.  Three Inca Doves greeted us at the entrance, but the sun was out by now, and our attention turned to butterflies as the place was alive with them!  Queens were all over, but we also saw several Sleepy and Tailed Oranges, Common Mestras, Gulf Fritillaries, White Peacocks, and a nice Mimosa Yellow!  The birds were calling but frustratingly stubborn (especially the Wilson’s Warbler), so we took solace in the water birds in the north pond that were more visible, mainly egrets and cormorants.  A Belted Kingfisher rattled which we eventually got in the scope, and even another Ringed “machine-gunned” in the distance, but he never showed, nor did his tiny cousin the Green Kingfisher (although a Green Heron sounded off).  White Pelicans were lazing by the spillway, along with Red-eared Sliders and Soft-shelled Turtles.  Heading back out an Orange-crowned Warbler and Ruby-crowned Kinglet allowed brief looks, and a Buff-bellied Hummingbird finally came in to a feeder!  A couple of Chachalacas peered at us from a tree before we took a quick look at the south pond (you can actually go to the end of the boardwalk now), but no kingfishers; we only added Tricolored Heron, Shoveler, and Green-winged Teal to the day list here. 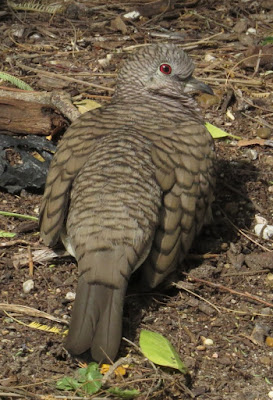 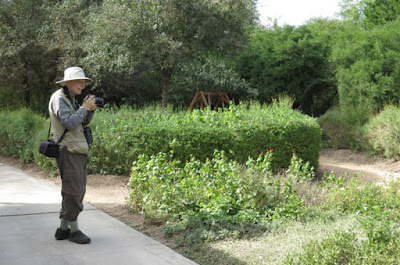 When the birds get quiet, you switch to butterflies! 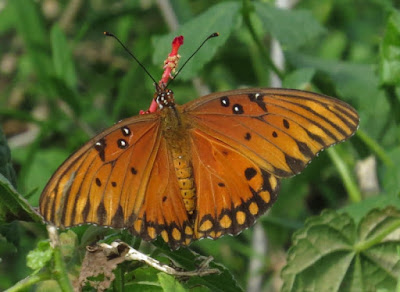 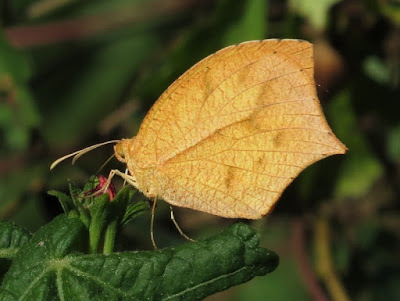 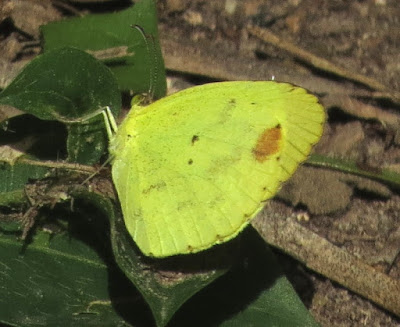 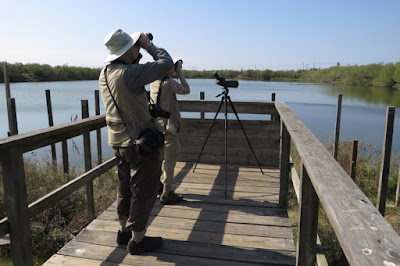 Enjoying birds in the South Pond 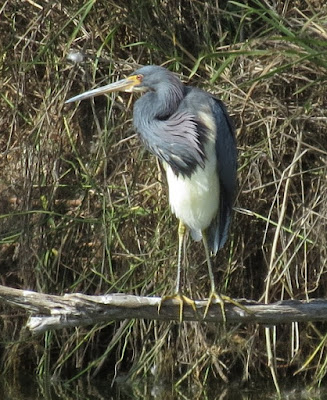 
Our last stop was Wallace Road, and while it started off slow (usually does going through the farmland), the wetlands were hopping, not only with birds but with butterflies!  We did have both species of goldfinches feeding on the sunflowers, and an Orange-crowned Warbler finally showed himself, but the songbirds generally stayed hidden (including a witting Least Flycatcher).  We had some nice “wire birds” including Kestrel, Eastern Phoebe, and several Couch’s Kingbirds.  At the wetlands we had wonderful looks at Neotropic Cormorant, Anhinga, both grebes, Great Egrets, and even a pair of Harris’ Hawks!  A couple of Black-crowned Night Herons were new for the list, and a Spotted Sandpiper bobbed along a log.  A Sora zipped across a hidden bog, but several more were calling.  In the butter department, besides the abundant Queens, we also enjoyed a sunning Monarch, Red Admiral, Great Southern White, and several Southern Dogfaces! 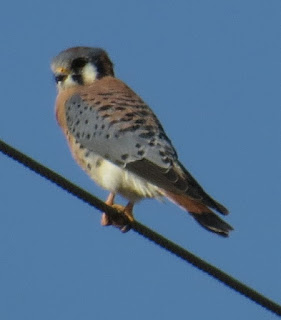 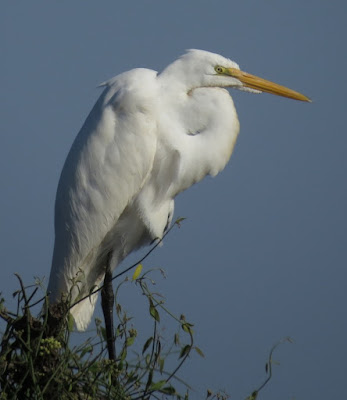 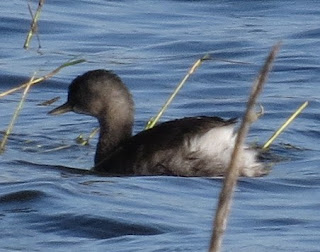 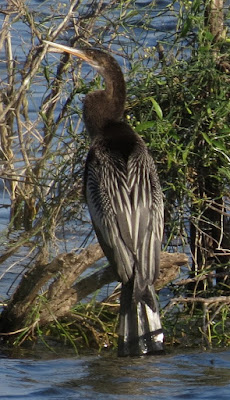 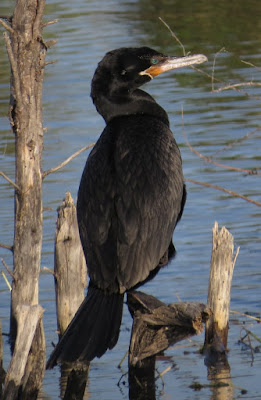 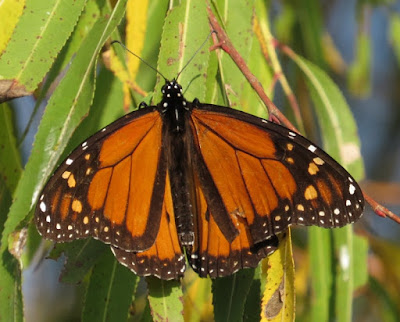 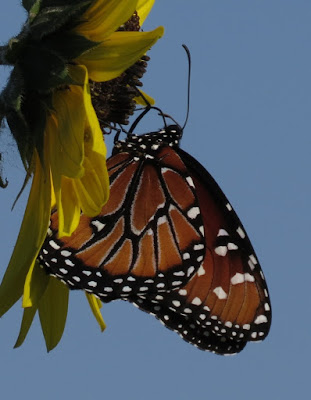 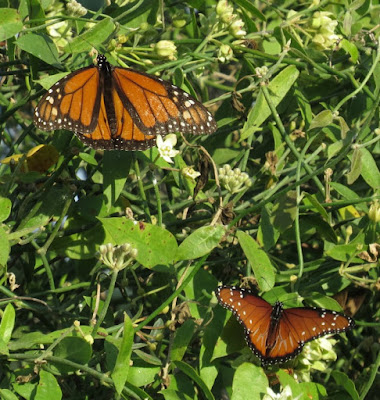 Monarch (upper left) and Queen together 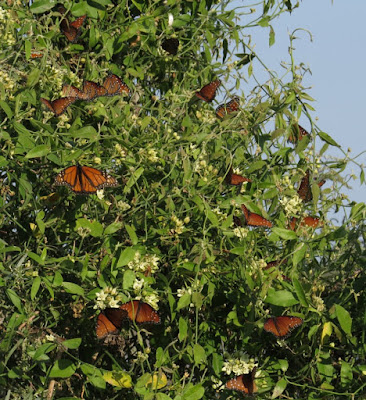 Tree-full of Queens (plus the Monarch) 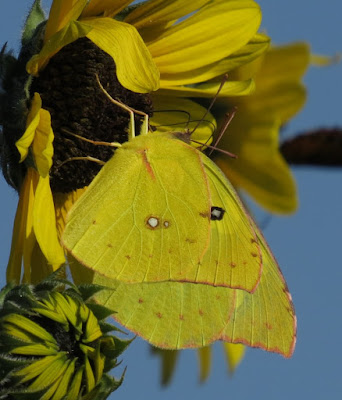 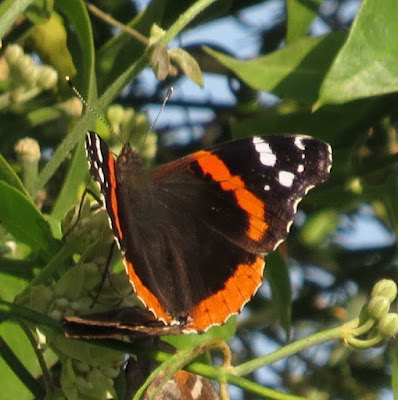 
We wrapped it up after that, with 82 species for the day!  Bird list: