Our youth pastor, Dale, surprised me by asking about a guided bird walk: his dad Les was in town, so he thought it might be fun to show him our local birds!  Dale’s wife Sara wanted to come as well, so after they dropped their kids off at school they all met me at Quinta Mazatlan!  All of them were neophytes (in fact, Dale admitted that he had to go out and buy a pair of binoculars for the occasion J), so it was great fun showing them the special birds right in their “back yard”, so to speak!


Before they even showed up I had logged about 20 species right there in the parking lot, the best bird being a curious Groove-billed Ani!  Unfortunately a cute Black-and-white Warbler foraged and Green Parakeets screeched over before they arrived, but when they did, thankfully the ani came back as though on cue!  A couple of Yellow Warblers fought in front of them, and a Curve-billed Thrasher “thrashed” next to a lady’s car (who happened to show up right about then)! 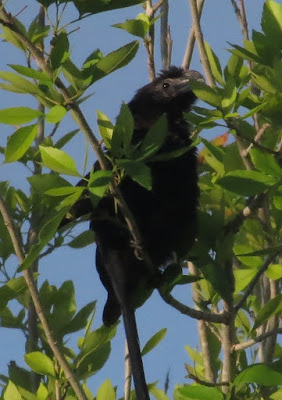 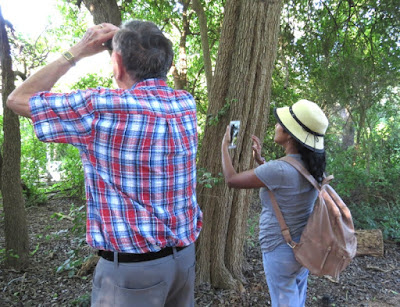 Les enjoys some battling Yellow Warblers while Sara tries to iPhone them... 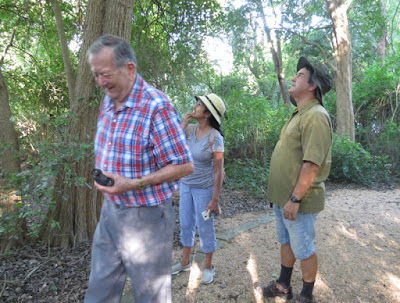 Les is happy while Sara and Dale still ponder the warblers...

We headed in, picking up a pik-a-chooing Summer Tanager on the way.  Dale graciously paid my entrance fee, then read up on the history of the mansion while I visited the ladies’ room…  Heading out the back door we followed the trail along the perimeter of the park, where we scared up a group of Chachalacas that had been visiting the feeding stations on the other side of the foliage!  Also at our feet was a family of Clay-colored Thrushes, and I enjoyed sharing the story of how rare these things were at one time but are now a backyard bird! 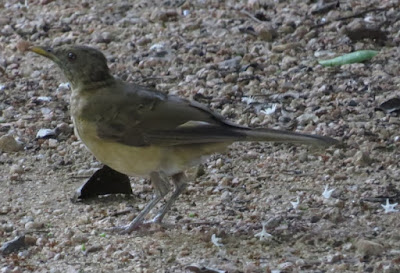 Since John Brush (the resident naturalist) had kindly put out feed for us (well, for the birds, but I told him I was bringing our youth pastor and his family J), we sat at the amphitheater for awhile and enjoyed the Chachalacas mooning each other (the White-winged Doves took off the minute we arrived)!  We gave it about 15 minutes, and that allowed the birds to get used to our presence:  shortly some Inca Doves snuck in, along with a big Fox Squirrel, but the stars were the Green Jays that arrived and showed off their brilliant colors!  The female Cardinal and Baltimore Oriole behind us was almost anticlimactic… 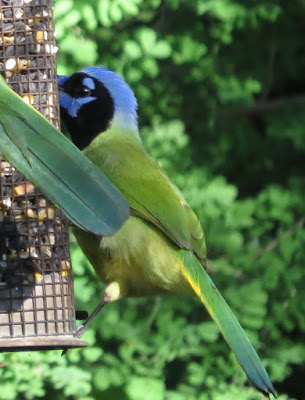 Green Jays at the feeders 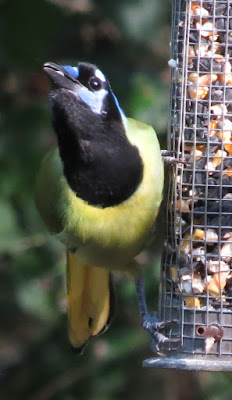 We continued on and were amazed by the Night Blooming Cereus cacti that were indeed blooming all along the trail!  (All the rain we had undoubtedly helped…)  I pointed out a Snout butterfly to them, and we took a quick peek into the Ebony Grove just to show them the cavity nests in the dead palm trees.  We then headed on to the section of the trail with all the statuary; Sara asked about the status of wild cats, and as if on cue we happened upon the interpretive sign about said wild cats!  I assured her that the only one they’d be likely to see would be the Bobcat (although there had been reports of Cougars out at Laguna Atascosa, along with their resident Ocelots).  I think the abundance of bunnies we were seeing led to that question initially (no predators to speak of), but it was fun when, at another rest break, Sara announced that she had an “eagle” sitting over ours heads!  Said eagle was actually a lovely Harris’ Hawk (who unfortunately didn’t stick around for pictures…)! 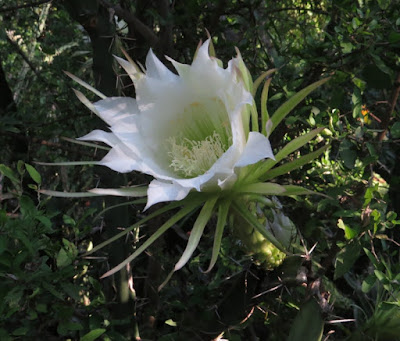 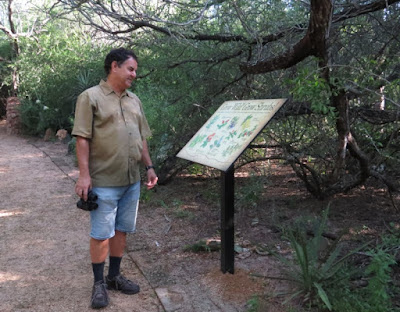 Dale checks out the shrub sign to decide what to put in his own garden next!

Heading across the entrance road, we pished a Blue-gray Gnatcatcher into view, then headed to the lily pond, as Sara especially was fascinated with water lilies!  I was looking for the Caribbean Yellowface, an exquisite little damselfly unique to South Texas and South Florida in the US, but none were had; had a huge Common Green Darner and a little Powdered Dancer instead.  After chilling and snacking on the deck of the Education Center (and then taking a peek inside), we called it a morning and went our separate ways, logging a total of 35 species for the morning. 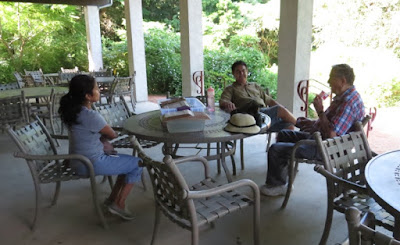 Relaxing with a snack