A Kingfisher Sweep - Kind Of

Mike and his buddies Tom, Richard, and Michael teamed up to do what they called “casual” birding in south Texas, but they had already racked up a great chase list by the time they got to the Alamo Inn, bagging the Valley’s second White-crowned Pigeon at South Padre and several other Valley specialties on the way down from San Antonio!  They still wanted to see Santa Ana and/or Bentsen State Park, their main targets being the two resident kingfishers, so we headed down in time to get to Santa Ana right about sunrise, logging a pretty Swainson’s Hawk and a Kestrel on the way down.


The weather was lovely, and a pretty, sun-lit Couch’s Kingbird greeted us right in the parking lot!  From there we headed to the “roundabout”, on to the way to which a family of Chachalacas checked us out at point blank range overhead!  We took the Pintail Lake Trail, and just before we got to the tour road a Beardless Tyrannulet sounded off, but true to form, he was an obstinate little devil and never did show, even though he sounded pretty close.  In the same vicinity, however, was the guys’ first Altamira Oriole (along with a handful of Hoodeds), a first-year Yellow Warbler, and a lineup of Purple Martins. 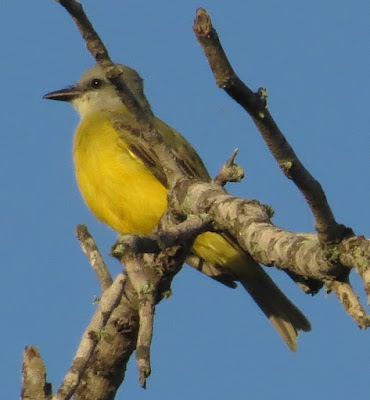 We finally gave up on the tyrannulet (and some Olive Sparrows that were lisping enticingly) and headed on to the lakes.  I pointed out the coke-bottle coo of the White-tipped Dove, and we got a not-so-great look at a Common Ground Dove.  Once out in the open area we heard a Belted Kingfisher rattling, but shortly after that came the machine-gun rattle of a Ringed!  So we hightailed it out to the far pond (where it usually hung out), trying not to get distracted by Lesser Goldfinches and White Peacocks on the way!  The main lake had plenty of water but was sparse on birds except for hundreds of Red-winged Blackbirds, a few flycatching Kiskadees, and a pod of Blue-winged Teal at the far end.  Some Cliff Swallows flew by at eye level, and the Belted Kingfisher showed well, being chased all over the place by a grackle!  An ani called across the way as well, but never showed. 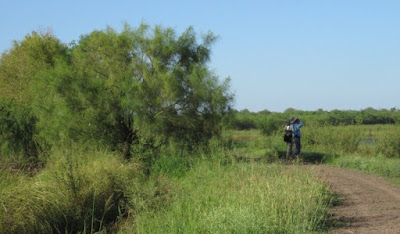 Checking out the lake

We finally made it to the far pond where the Ringed Kingfisher had gone dark, but there were at least a dozen Anhingas lounging about!  Two Green Herons popped up, and while watching the heron Richard actually spotted a Green Kingfisher across the way!  Everyone got great scope views!


We eventually gave up on the kingfisher and headed back in the heat, but not before a Cave Swallow chattered overhead (another lifer for the guys J), and someone spotted an Eastern Kingbird in the reeds!  We took the wide cutoff trail, where a big beautiful Harris’ Hawk was posing right in front of us!  One of the guys found a male Yellow Warbler, and while I heard the tyrannulet again, he was quite distant.  We took the Willow Lake Trail back next to the one Willow Lake with water in it, and as we paused to scan (trying to spot the Indigo Buntings that were calling), what should shoot by but another Green Kingfisher, followed by his mate!  They flew back and forth a few times, giving great views and calling excitedly! 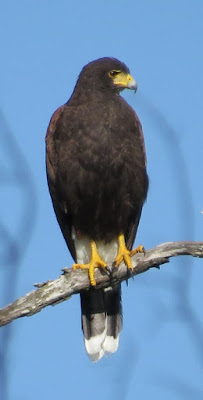 Heading back to the trailhead, one of the guys spotted a Texas Spiny Lizard; I was hoping to point out a specialty Rosebelly Lizard for Mike and Richard (as they were the reptile guys), but none were cooperative…  But just before the levee a family of Altamira Orioles gave us nice looks!  At the canal what should the guys spot on the concrete but yet another Green Kingfisher!  (I asked them if four Green Kingfishers made up for a heard-only Ringed… J) 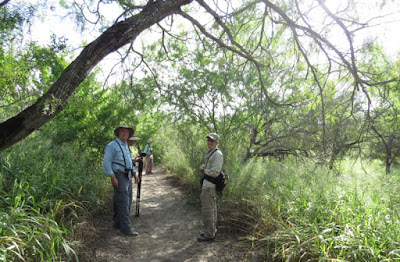 Gang on the Willow Lake Trail 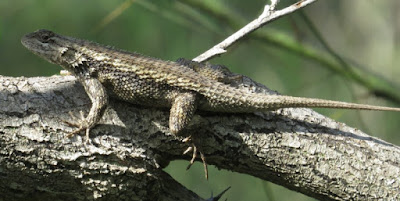 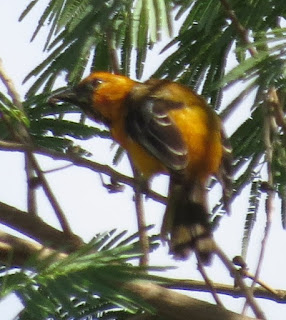 From there I thought we’d give Anzalduas a try as I sometimes get the Ringed there, so over we went, enjoying a Caracara and a Great Egret on the way in.  We parked at my little corner and checked out the river, but except for a Laughing Gull on the deck in the middle of the river it was pretty sparse.  I did hear an Osprey, and pretty soon we spotted him in a dead tree across the way.  But another white bird to his right turned out to be a White-tailed Kite!  The guys were thrilled, as this was a life bird all around, and when its mate came in they really put on a show!

Checking out the Rio Grande 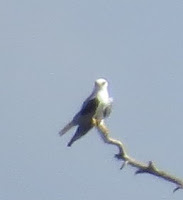 We circled the park, hoping to kick up a Black Phoebe, but to no avail; we did happen to spot a female Vermilion Flycatcher, however.  The spillway on the way out had several stilts, a couple of Pied-billed Grebes, and a handful of Mottled Ducks.


With what little time we had left we decided to swing by the Old Hidalgo Pumphouse, as I had sometimes gotten the kingfisher there and it was on the way home.  We could hear distant Monk Parakeets rasping once we got out of the car, and Buff-bellied Hummingbirds shot through along with the occasional Green Jay, but even the Black Phoebe didn’t show up at the resaca L.  I was hearing a Gray Hawk in the NWR tract, so we walked up next to The Wall and tried to see if we could spot it; no such luck there, but a young Harris’ Hawk did fly overhead.  The most exciting bird according to eBird was the male House Finch next to the road! J 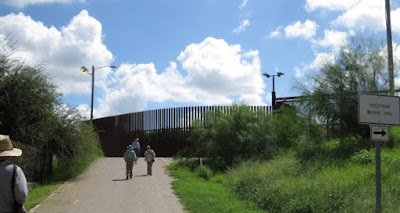 Checking out The Wall

We circled around front in hopes of Clay-colored Thrush and got some noisy Curve-billed Thrashers instead, then called it a day.  We ended up with 71 species, which is not bad for just a morning!  Bird list: