A Journalist Comes Back for More!

Clayton Maxwell, who earlier in the year had come down to write an article about the Valley for Texas Highways, wanted to bring her family down to experience some birding, and initially suggested going to the same places I had taken her and her photographer Kenny (Santa Ana and Quinta Mazatlan – when the famous Mexican Violetear showed up), but I gave her a choice:  if they were interested in chasing a rare bird again, we had the Golden-crowned Warbler at Frontera Audubon, and a number of goodies at South Padre Island, including a Masked Booby and the Valley’s second White-crowned Pigeon!  She and her hubby Scott talked it over and chose Frontera (as it was closer, and they had gotten in late the night before), so we took off around 7:30 with Clayton at the helm, and Scott in charge of eight-year-old Harry and 13-year-old Carly in the back seat!


We checked in with Chris and headed into the woods, and almost immediately I heard the distinctive rattle of the warbler (I had played the call for them and showed them a picture on the way there)!  It was very close, but being skulky, and I wish someone had been able to take a video of us sneaking up on the thing, because out of the corner of my eye I saw Harry right by my side, and Big Sister Carly hanging onto his shirt to keep him from running ahead of me! J  I got enough of a glimpse to see the head pattern, and Harry saw him dart across the path, so that was good enough for him!  Birding buddy Brad showed up about the same time and refound the bird, but again I only got a glimpse of the yellow underparts this time before it shot away.  But it at least allowed a little bit of a recording at the “Kingfisher Resaca” while a Buff-bellied Hummingbird came in for point-blank views! 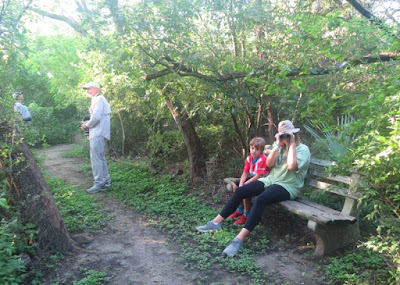 Carly (with the bins) looks at me while Brad looks for the vagrant warbler...


We continued on, where lots of birds were calling but very little was showing; Scott saw a Kiskadee based on his description while a Beardless Tyrannulet called nearby.  Carolina Wrens were singing all over, a bird Harry recognized from his home in Austin!  Some Red-crowned Parrots called really far away, and a Green Kingfisher gave its ticking call (very similar to the warbler, in fact), but never showed itself.  Heading onto the boardwalk and wanting to be able to show the kids something through the scope, we finally settled on a male Roseate Skimmer that was planted on a stem below its mate!  We heard lots of White-tipped Doves, and the kids were quick to recognize the “coke-bottle bird” as we went along! 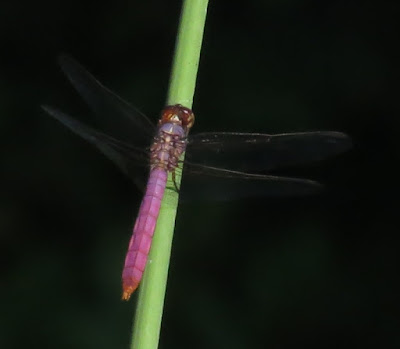 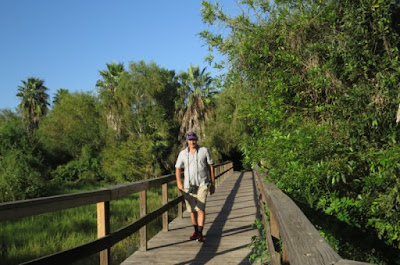 Scott on the boardwalk

Figuring that maybe things would be easier to see at the feeders, we headed that direction when I spotted a group of White-winged Doves up on a dead tree, so we got the scope on them so the gang could ooh and ahh at their eyes! J  White-eyed Vireos sang all over, and Scott got a glimpse of one high in a tree.  We then sat for five at the feeders, enjoying a Green Jay coming in and a Cottontail hogging the area underneath the feeder.  Heading out, Clayton was a very good teacher as she asked the kids what five birds they could remember seeing (Harry mentioned the warbler right off the bat J) and what bird says, “Quick, get the beer, chick!”  (Answer below… J)  Sensing that the kids needed a change of scenery we headed back to the parking area, suggesting we go to the deck at Estero Llano Grande, where we could chill on the covered deck and see the birds through the scope; that sounded good all around! 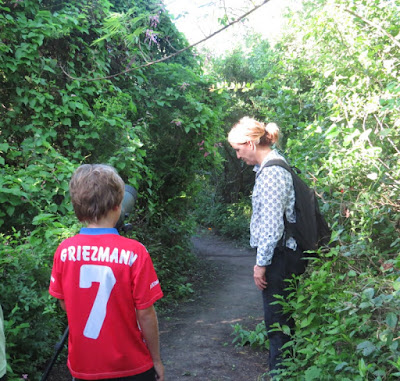 Harry checks out the White-winged Dove (below) through the scope! 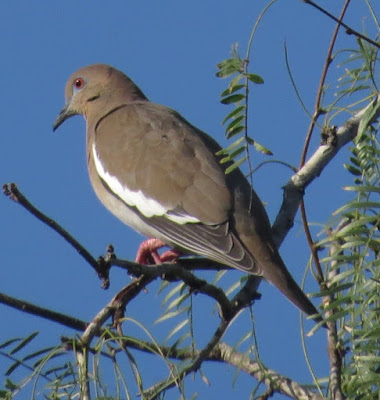 Even at the lot at the park a Mockingbird at the top of a tree through the scope was a hit!  The various plumages of Red-winged Blackbirds even brought some excitement, as did the Chachalacas running around the feeders!  Both adult and “adolescent” Little Blue Herons showed well, plenty of Black-bellied Whistling Ducks abounded, and while looking at the latter they even spotted a Least Grebe on their own!  They enjoyed the purple speculum of the Mottled Duck and the striking pattern of the three Black-necked Stilts that came wheeling in and then landed for scope views, and even the subtle pattern of the eclipse-plumaged Blue-winged Teal was a winner! 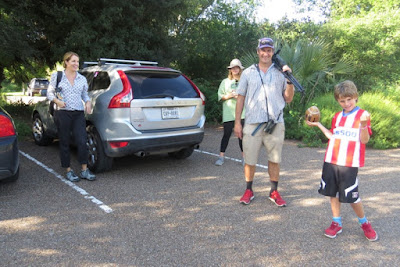 Ready to roll at Estero! 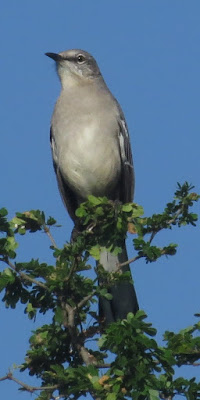 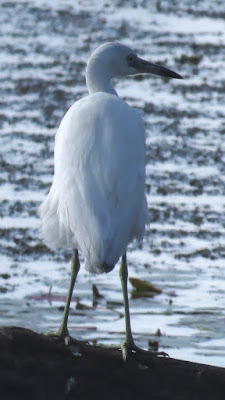 Immature Little Blue Heron (above and below) 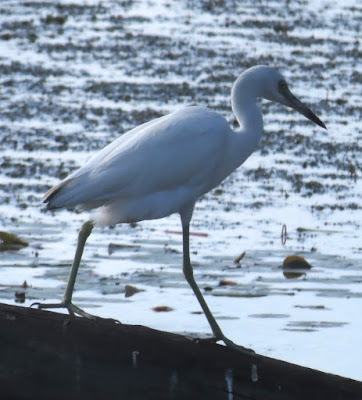 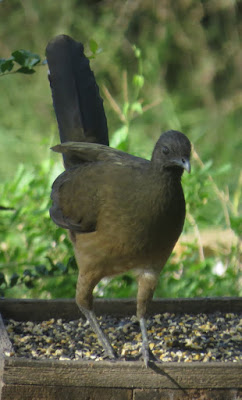 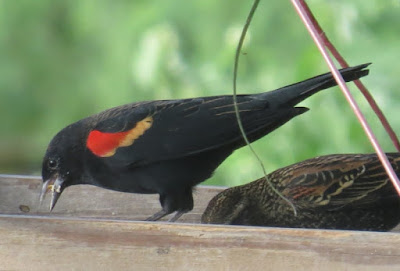 Red-winged Blackbirds (above and below)

The kids talked Mom into getting ice cream (hard to pass up at Estero J), we sang “Happy Birthday” to Scott, then called it a day, with 45 species for the morning, the last bird being a Curve-billed Thrasher that darted across the road just before getting back to the Inn!