When I asked my friend Pat if I could take her out to lunch for her birthday, she suggested going birding instead, looking for birds she still needed for her Hidalgo County list, so I thought that would be fun!  Problem was, almost every bird she had listed were vagrants at worst, or extremely difficult at best, but since I had logged both Scaled Quail and Chihuahuan Raven along the Sparrow Road Route (granted, on very rare occasion), I decided that would be the best place to bird.


I was a little concerned about the condition of the caliche roads after all the rain we had had, but thankfully the roads were fine (even quite dusty when traffic went by in the opposite direction), and since I figured the chances of actually seeing the quail were better along dirt 7 Mile Road (I had heard them along paved FM 2221, but had never seen them, and the traffic along that stretch had gotten worse over the years), we headed there straight away.  We arrived a little before dawn, and it was actually quite pleasant; it was mainly overcast at that time, with Bobwhite calling in the distance, but no Scaled Quail called.  As we crawled down the road with the sun to our back, we ended up getting great looks at common thornscrub “ranchland” birds such as Curve-billed Thrashers, Scissor-tailed Flycatchers, and even Cassin’s Sparrows on the wires!  Olive Sparrows sang unseen, along with a couple of calling Long-billed Thrashers.  A beautiful Bullock’s Oriole showed off in a mesquite, and a big covey of Bobwhite gave extended views down a side road behind a fence.  A Roadrunner hopped down out of his mesquite after I started messin’ with him J!  Mourning Doves were all over the place, but one small bird on the wire turned out to be a nice male Blue Grosbeak!  Our only warbler of the day, a Yellow, appeared in a small bush, and an empid gave us a brief view that we best-guessed as Alder, based on the rather broad tail and thin eyering.  A couple of Great Crested Flycatchers gave their strong Wheep! call as well.  A couple of black blobs on top of a bush turned out to be Groove-billed Anis, and we narrowed an Archilochus hummer down to a Black-chinned based on the long bill and wing/tail length ratio. 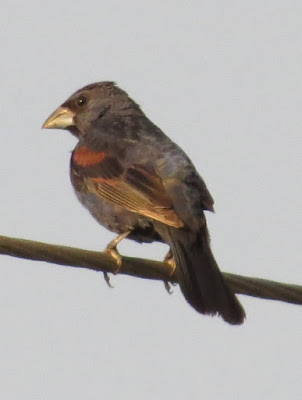 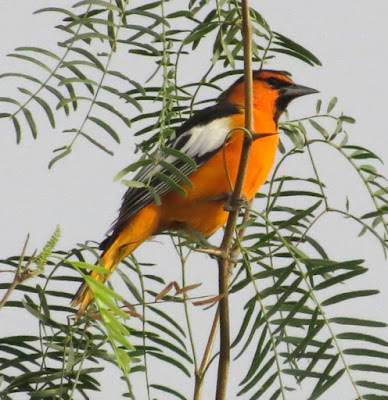 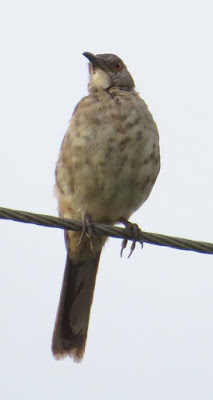 Two shots of a Curve-billed Thrasher 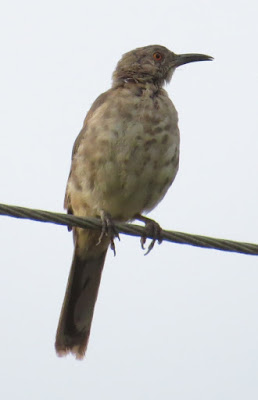 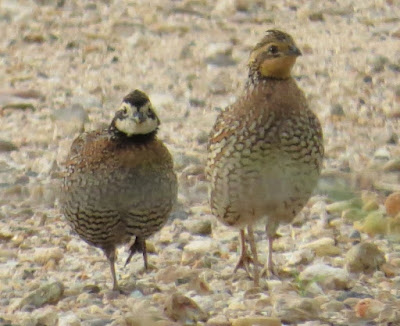 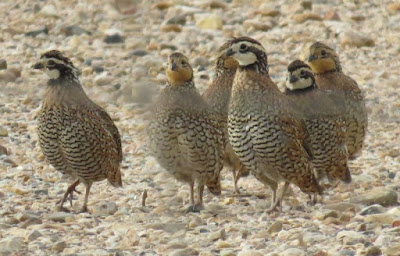 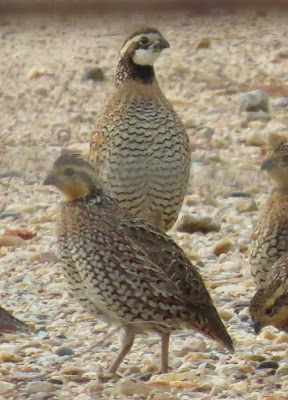 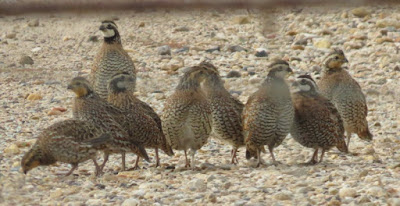 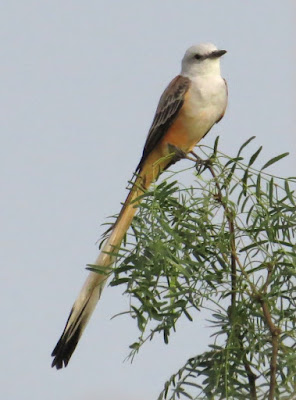 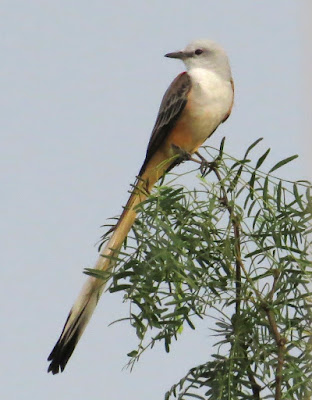 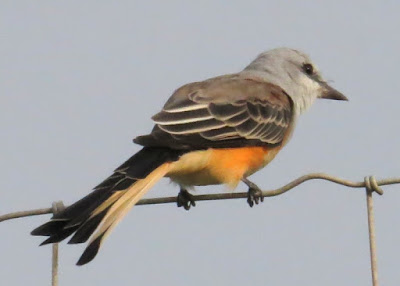 The female has a shorter tail 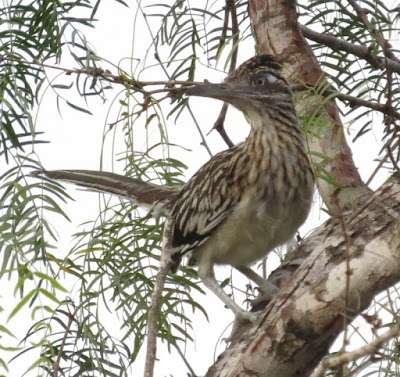 A Roadrunner in a tree hops down to investigate when I start cooing at him! 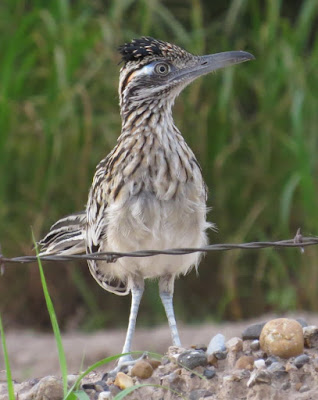 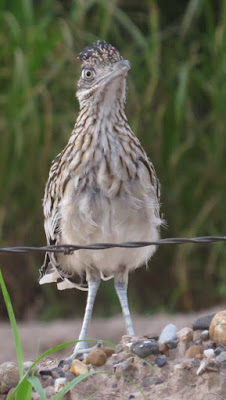 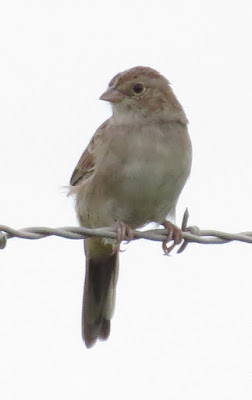 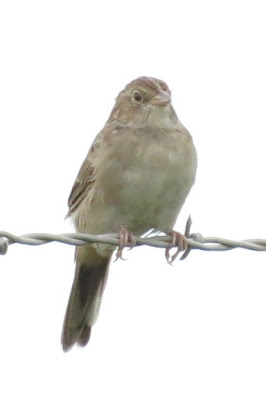 7 Mile crosses into Starr County, so since this was an Hidalgo County-only chase, we turned around at the best guess of the county line, picking up a Harris’ Hawk on the way back to the four-way stop.  From there we headed north on Jara Chinas, where one sorghum field was alive with Blue Grosbeaks and Dickcissels!  Barn Swallows swooped overhead, and several Brown-headed Cowbird flocks crossed the road.  Three Purple Martins perched on the wire while two Barnies tried unsuccessfully to join them!  Lark Sparrows started showing up as well, and near the intersection with 14 mile a scruffy-looking Swainson’s Hawk sat on a pole.  After we made the left turn on 14 Mile, what we assumed was his mate was sitting across the field, being bombed by Mockingbirds.  A little further down we had a handsome Eastern Kingbird, as well as Caracaras in the fields.  A beautiful Black-throated Sparrow came out with a little coaxing, while similar-sounding Bewick’s Wrens sang unseen.  These purple bushes that Pat identified as Cenizo (also called Texas Purple Sage) were all over, having bloomed due to all the rains!  One of the more interesting sights along the roads were all these little termite towers rising like little sticks! 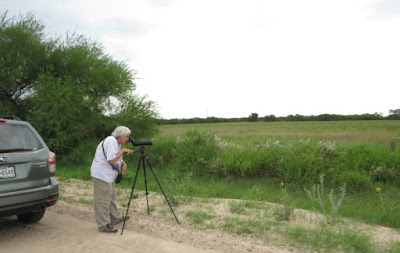 Pat checks out the field of Dickcissels and grosbeaks! 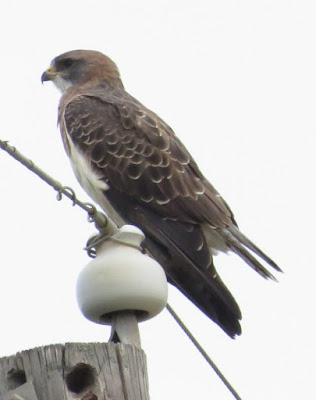 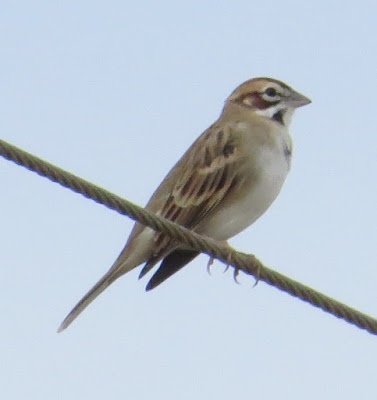 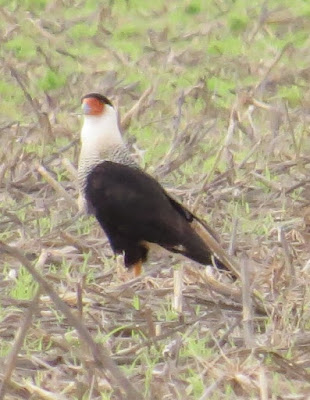 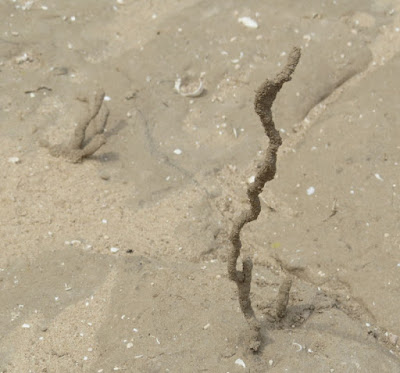 Weird "sticks" made by termites 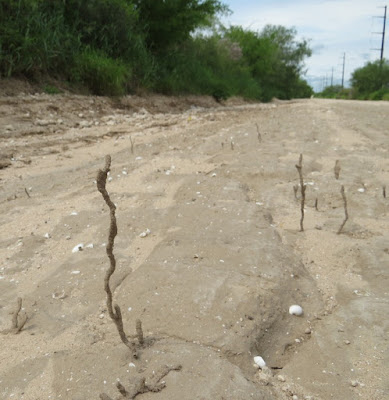 After turning around at the county line, we returned to Jara Chinas, enjoying some cute Pyrrhuloxias and happy to pick up our first Kestrels of the season on the way!  We headed north, intending to call it a day, but an immature White-tailed Hawk caused us to slam on the brakes (and we would see a beautiful adult later on)!  Otherwise it was pretty barren up this way (as per usual), but the whole route was quite green after all the rains; heading back on FM 490 there were a lot of “wetlands” in the fields, but the only one with any birds was at the intersection with Wallace Road, so we swung in to enjoy Snowy Egrets and a single Black-necked Stilt.  The road itself looked impassable a little ways down, so I’m glad I didn’t do it (as that was my original planned route for this day)!


Headed home with a modest 51 species for the day.  Bird list: