I hadn't been to Starr County in awhile, so planned on heading out there Saturday.  The cold front was supposedly on its way out, so it was in the pleasant mid-60s, but still overcast and breezy, so things were pretty quiet when I got out to Falcon State Park at dawn.  But starting the day was an adult and subadult White-tailed Hawk, a bird that, according to eBird, had never been recorded at the park before!  A male Vermilion Flycatcher was barely discernable in the gloom. 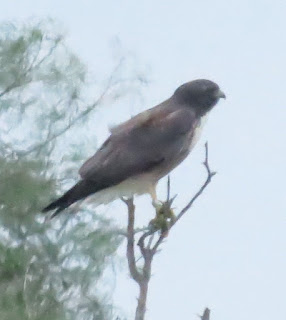 Once technically in the park, the sky seemed filled with wave after waved of Great-tailed Grackles!  They would carpet the lawns in the primitive camping area (and later in the cabin area, where even the campers seemed fascinated with their antics as they shots pictures of them), and a Roadrunner would dart out for a morsel before scrambling back into the bush, but there really wasn’t much activity.  A Caracara and an Osprey occupied different power poles at various intersections, and even the boat launch area was empty except for one truck!  I opted to hike the overflow area, as it looked pretty dicey (and was, after all the rain), and was rewarded with a couple of vocal Spotted Sandpipers; one was even singing!  There were small flocks of ducks flying by that were too far away to ID, but a pair of Mottled Ducks were close enough to rule out Mexican.  A handful of Great and Snowy Egrets were about, and eventually good numbers of Laughing Gulls and Barn Swallows flew by over the lake.  I kicked up a couple of sparrows in the grass, but they dove back down immediately, never to resurface with the wind.  Walking back up to the parking lot I saw where they had actually erected a barricade going up the incline into the overflow lot itself (which can sometimes be good for sparrows, but not today), so I’m glad I didn’t even attempt to drive down there! 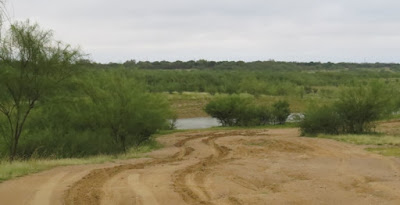 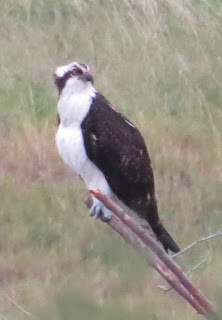 Even hiking around I noticed tons of Snouts flushing from the path despite the weather, and while hiking a little of the nature trail from the “hidden” parking lot, lots more were hiding in the bushes, along with an ode that I really thought was something unusual at first (as it appeared to have some dark patches in the middle of the wing), but as I got closer with the camera it turned out to be a female Red Saddlebags with her wing at a weird angle…  But further down the trail a beautiful male Black Swallowtail flopped around on the ground and finally posed as though sunning, but I didn’t discover until looking at the pictures later that he had a spider on his back – no wonder he was acting strangely!  Bird-wise added Pyrrhuloxias at this stop. 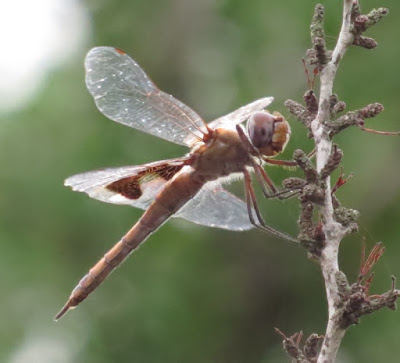 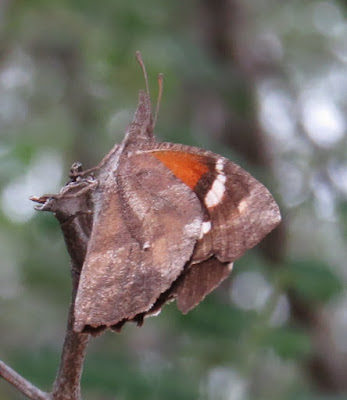 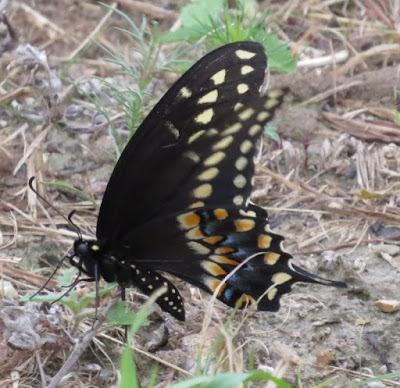 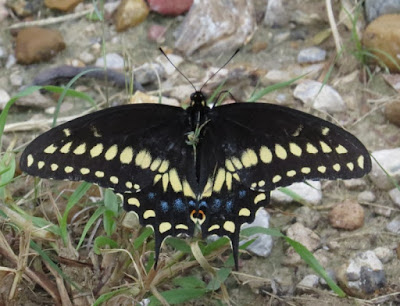 Note the spider on his back!

Despite the weather, butters were flying, so I checked out the butterfly garden and kicked up quite a few things:  besides the ubiquitous Snouts there were several Queens and Elada Checkerspots, plus a few sulphurs, a Sleepy Orange, a pretty Theona Checkerspot, and a Fatal Metalmark.  Somewhere in here a pair of Southern Dogfaces were batting about, and I managed a fuzzy picture of the unique dorsal pattern!  A cute little Inca Dove posed on a post on the way out of the parking lot. 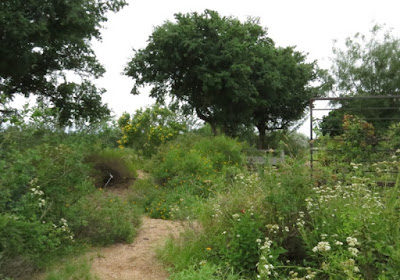 The butterfly garden at Falcon SP 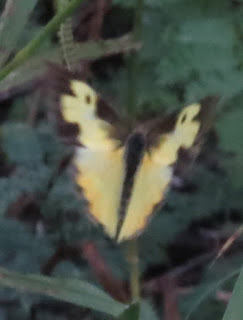 Fuzzy shot of the "dog face" of the Southern Dogface (use your imagination...) 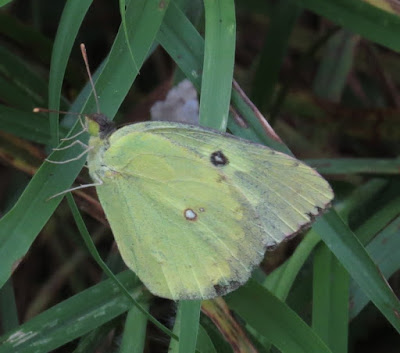 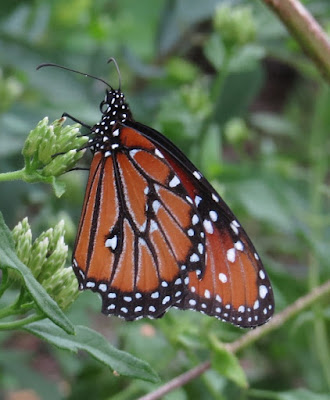 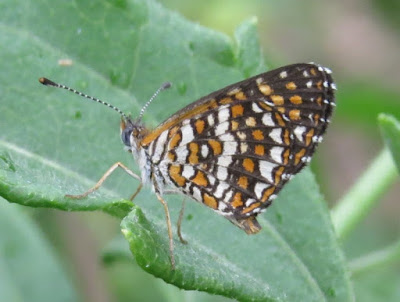 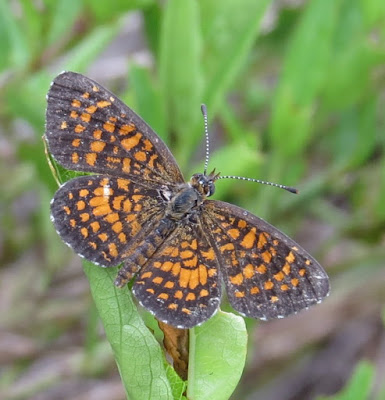 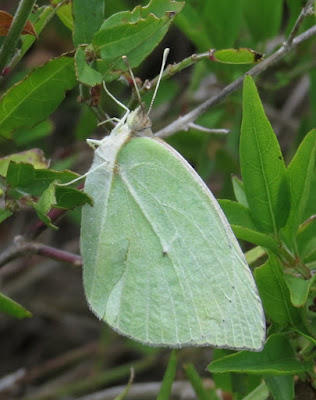 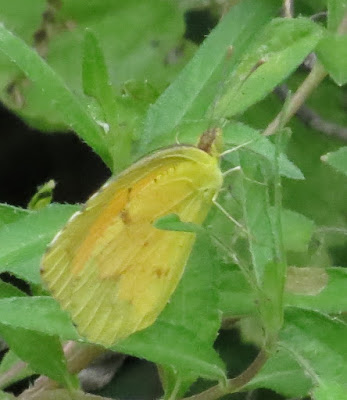 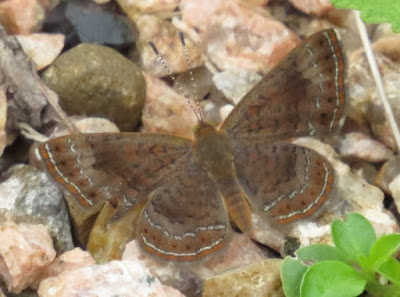 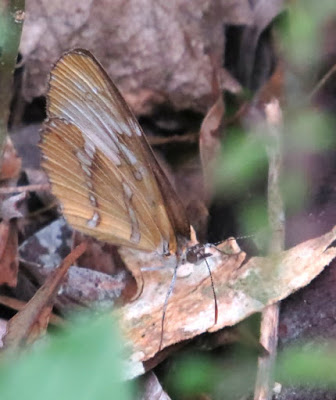 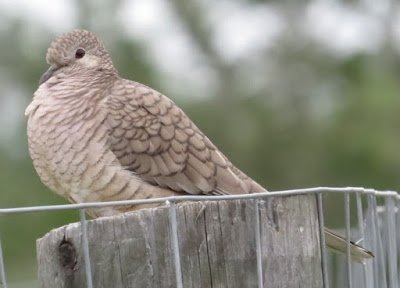 
Hiking the little loop in the picnic area didn’t add anything new, so headed out after that, foregoing the Dump Road and heading straight to Salineño.  Upon arrival I noticed four guests who were staying at the Inn, and they had just finished the trail:  Lark Sparrow, Wood Stork, Anhinga, Roseate Spoonbill, and Audubon’s Oriole were nice (they only heard the latter), but no seedeaters or any other unique things.  While we were talking a pair of Turkey Vultures circled overhead, and I offhandedly mentioned that it’s good to check them for Zone-tailed Hawks, when that’s exactly what one of them morphed into!  That was probably the bird of the day! 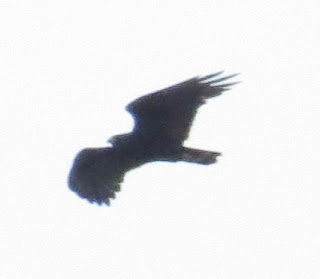 So I headed on down, getting much more ode action than bird action:  Powdered Dancers were out the yin yang, and a female Black Setwing posed.  I thought I had something really great as I shot an “orange” damsel, but later scrutiny of the pictures revealed it to only be a female Blue-ringed Dancer (saw the male later).  A huge Cane Toad sat stoically near the grass, and at the end of the trail I found their Anhinga circling with a bunch of Black Vultures and heard an Altamira Oriole choiping and whistling from the island, but that was about it.  On the way back I had a pretty Common Sootywing in the butter department. 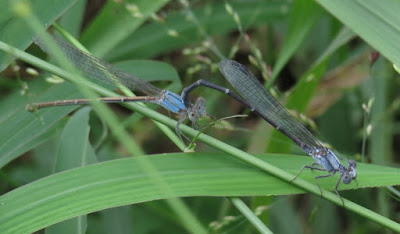 Powdered Dancers in tandem (above and below) 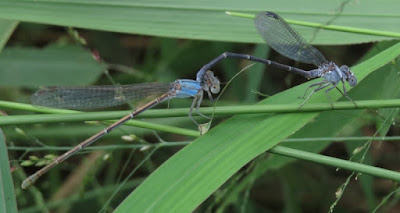 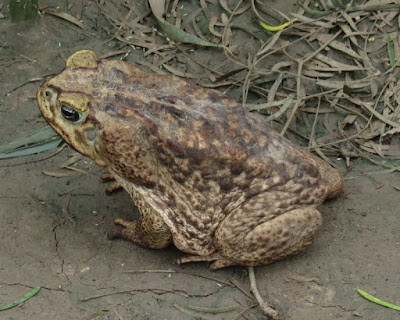 View of the Rio Grande at the end of the trail 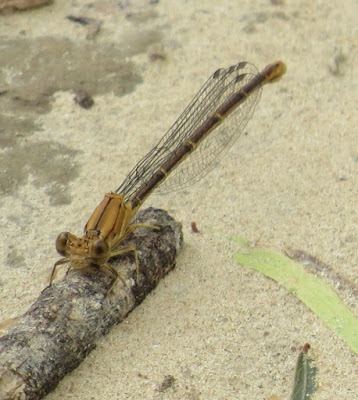 Female Black Setwing (above and below) 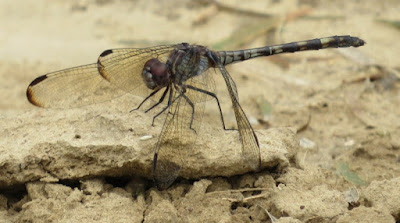 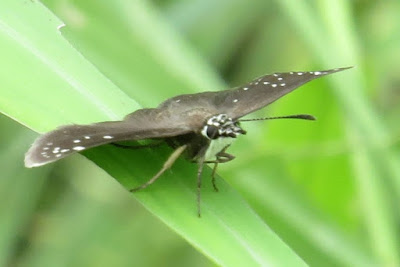 Common Sootywing (above and below) 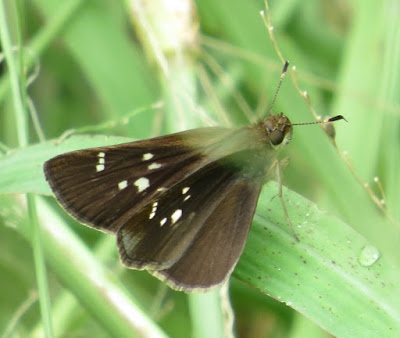 Had my lunch (which was the rest of last night’s steak J) back at the car, then headed on home with a modest 52 species for the day.  Bird list: