Willacy County is one of the most under-birded counties in the LRGV, but there are some great places to explore; one of my favorites is Sacahuistale Flats, a road-birding route that basically follows SR 186 eastward from Raymondville towards Port Mansfield (PM).  The Flats themselves are about halfway to PM, but I like to start my route just past FM 1420, as some of the more “wild” ag fields (i.e., away from peoples’ homes) provide a different habitat that can have some nice birds for the trip.  On the way to the start of the route just before sunrise, I was honestly afraid I was gonna nail one of the dozens of southbound Barn Swallows swooping low across the road!  Thankfully I didn’t, but at the first stop, there was a constant flow of them; I think the final total was well over 200 (and I probably undercounted)!  The palm trees along this portion of the route often have Hooded Orioles, but today I would interestingly get them further east, in the thornscrub (guess they’re on the move, too, along with the Baltimores)!  Was pleased to not only hear Upland Sandpipers, but a pair flew by giving great looks!  Other “ag specialists” added along this stretch included Long-billed Curlew and Horned Lark.  Also managed my first-of-season Kestrel hunting from a wire.

Once out of the ag fields you enter typical Tamaulipan Thorn Scrub habitat.  To my knowledge, all the land you drive through right into PM is privately-owned ranch land, but birding from the road is of course permissible.  Be careful, though, and be sure to pull way over:  the Weekend Warriors heading out to PM with their boats don’t dilly dally, as the speed limit along here is 75!  You’re also not too far south of the King Ranch, and diligent birders have found Ferruginous Pygmy Owl along here!  The only “King Ranch Specialty” that I encounter with any frequency out here is Audubon’s Oriole, and this day I had two birds sadly singing (along with a very happy-sounding Altamira on a power pole)!  The poles are also great places to look for White-tailed and Harris’ Hawks, along with Crested Caracaras.  A nice surprise was a young Red-shouldered Hawk perched on a power line!

Scene along the road 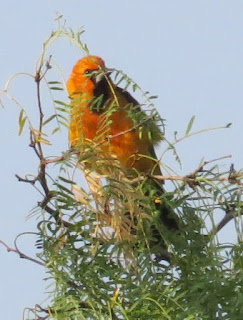 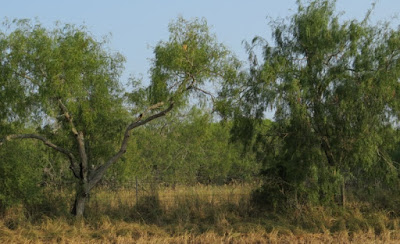 Harris' Hawk (not the band on his leg)


About nine miles past 1420 is a little creek with a couple of primitive parking areas; this time a couple of fishermen had already staked the place out, so I didn’t check it, but with the freshwater vegetation it can be a good place to look for herons, kingfishers, Yellowthroats, Spotted Sandpipers, Anhingas, and, in winter, Swamp Sparrows.  Today the wires were lined with migrating Purple Martins!

Mesquite savannah near the creek 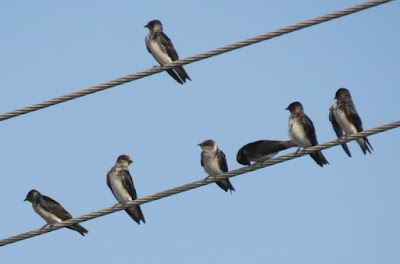 Further east, you start getting into mesquite savannah and the coastal plains.  This is the realm of Cassin’s and Botteri’s Sparrows, and I was surprised to hear a couple of the latter still singing (although it was just the sputtering first part, leaving off the bouncing-ball ending)!  Didn’t hear any Cassin’s Sparrows this trip, but did pick up a couple of Eastern Meadowlarks.  Bobwhites can be calling from the distance all along this route, even in the ag fields! 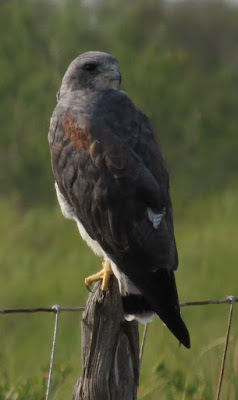 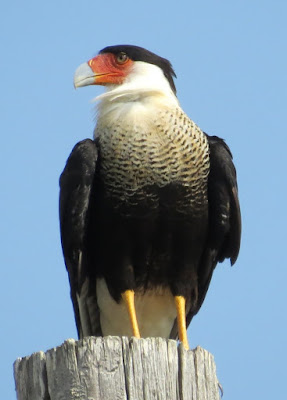 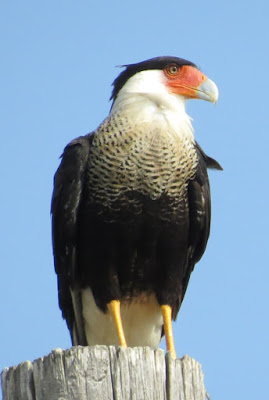 I wrap up my survey just before entering Port Mansfield, making it a nice 13-mile route.  In PM, there are three places we local birders generally check:  the first is the new Laguna Point Rec Area, a great place to look for shorebirds and other water birds.  I say “new” only in the sense that they’ve greatly improved the entrance road and have built new piers, observation decks, trails, and even a restroom!  Before all the improvements the place could often be a muddy death trap (or it seemed like it, anyway), but it was still great for birds – a lot of us got our life Purple Sandpiper out there one year!  On today’s outing there was nothing out of the ordinary, but a scan from the end overlook added a ton of young Least Terns to the list, in addition to a single Common Tern, lots of Laughing Gulls, and a few shorebirds.  A good trail (and even an interpretive sign) heads out to the water, and from there I was able to get a closer look at the shorebirds:  mostly Western Sandpipers, but also a few Leasts, Sanderlings, Ruddy Turnstones, and Semipalmated and Black-bellied Plovers.  On the way out I wasn't fast enough with the camera to catch what was probably a Mexican Racer slithering across the road, but unfortunately a Texas Rat Snake wasn't so fortunate... 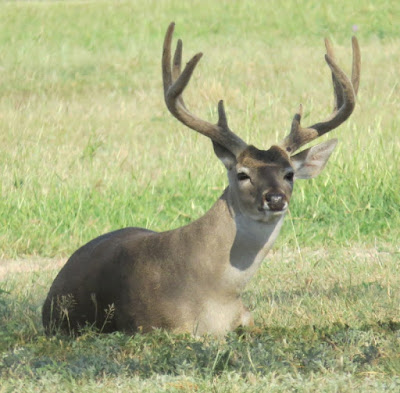 White-tailed Deer with a serious rack chilling out at Port Mansfield!

View from the end of the trail at Laguna Point Rec Area, showing the end parking lot 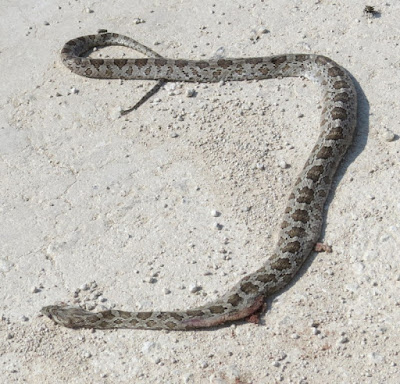 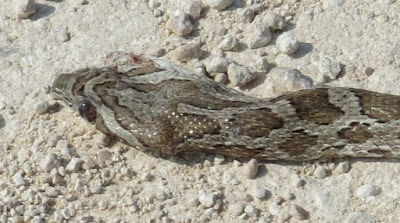 Detail of the head pattern

The next two places are mentioned on the Texas Wildlife Viewing Map:  Fred Stone County Park and the Port Mansfield Nature Trail.  The parking area for the county park is usually too overrun with people to be worthwhile, so I just drive right up to the fence at the end of the road and check out the wetland.  Sometimes there’s not much of a wetland to check, but today there was a little puddle of water that had a ton of Black-bellied Plovers, Royal and Caspian Terns, and Long-billed Curlews!  (One of the curlews even fed close to the road in the grass!)  The Nature Trail is often too hot to house many birds (at least this time of year), but this day at least managed to add a Ruby-throated Hummingbird and a couple of Black Vultures to the day list!  This can be a good place to pick up Wild Turkey, and on other occasions I’ve gotten some good butterflies (such as Tropical Buckeye) and migrants (such as Yellow-throated and Bay-breasted Warblers), but today the stars of the show were the White-tailed Deer asking for handouts… 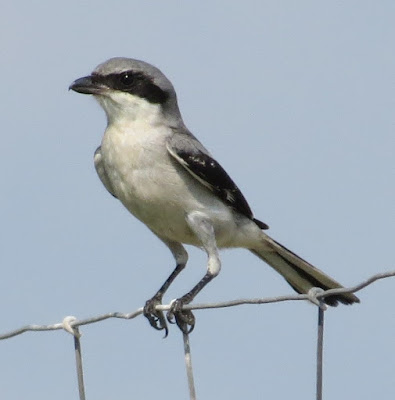 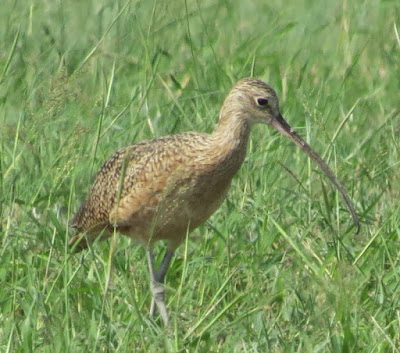 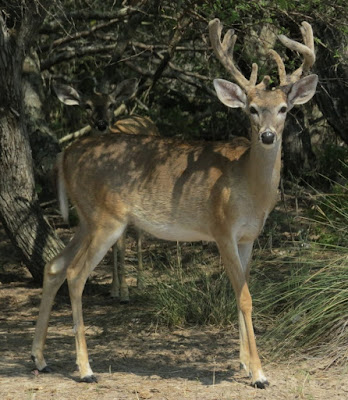 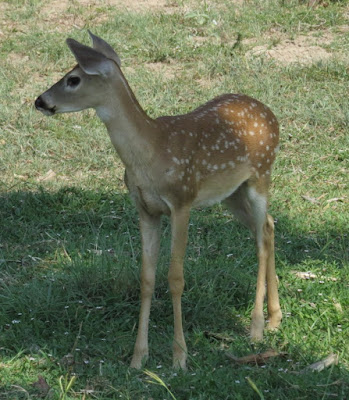 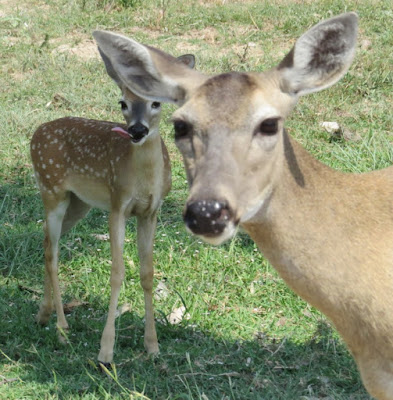 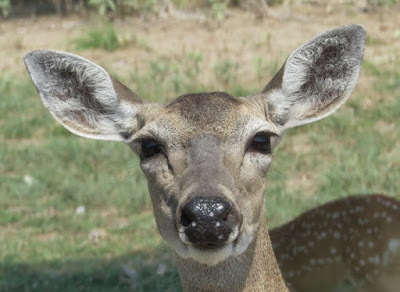 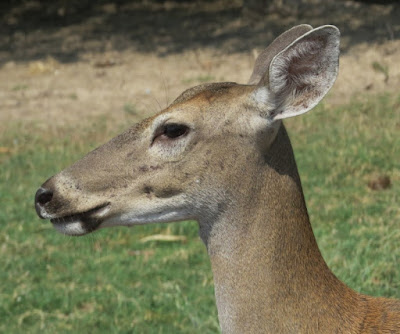 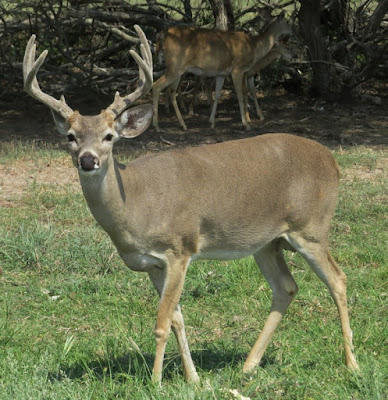 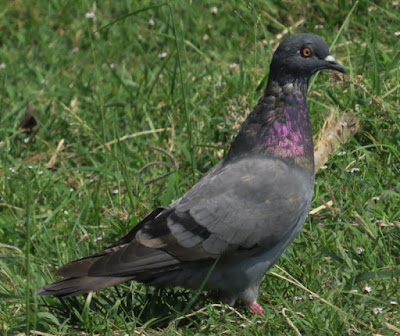 A Rock Pigeon squeaks in as the last bird of the day!
Bird List: