A Survey and a Rarity Chase

September’s survey of Laguna Seca Road was lovely, although there were some dicey spots on the dirt portions of the road after Friday’s rains!  The usual suspects were about (Pyrrhuloxias, Bobwhite, and rattling Roadrunners), but alas, the streak was broken when no Fuertes’ Red-tailed Hawk showed up! L  (I did spot a big buteo on one of the giant power towers along the right-of-way, but he was too far away with his back to me to allow positive ID…)  Early on a nice male Bullock’s Oriole shot into a bush beside the road, but the big show consisted of several migrating Baltimore Orioles – September is their big fall migration month here, and they can show up most anywhere!  Regular raptors like Caracaras and White-tailed Hawks showed up on the poles, and flyover Upland Sandpipers and Long-billed Curlews were closer to the ag fields.  On paved Laguna Seca, a group of five Turkeys showed up (this is a good area to look for them), and there were so many Loggerhead Shrikes along the route that eBird actually flagged them!  As with most open areas, Scissor-tailed Flycatchers were in good numbers, and at one stop one was keeping company with a noisy Kiskadee!  Swallows were out the yin yang – mostly Barns, but also a few Caves, Cliffs, and Banks thrown in, along with a couple of Purple Martins that shared their power lines with a bunch of Barnies!  A couple of stops yielded a good number of Cattle Egrets with their attendant cows, J  and during a discreet stop a Blue-gray Gnatcatcher decided to show, along with an unidentifiable empid!

Savannah scene along the road 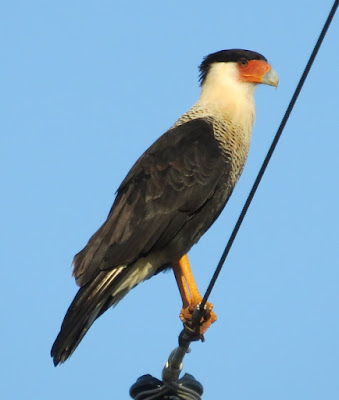 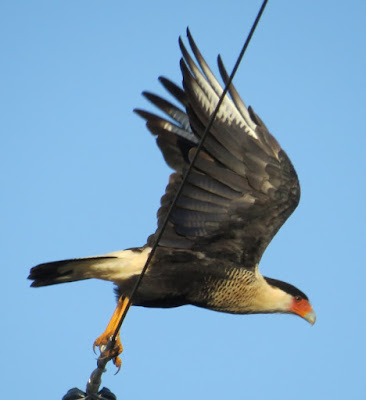 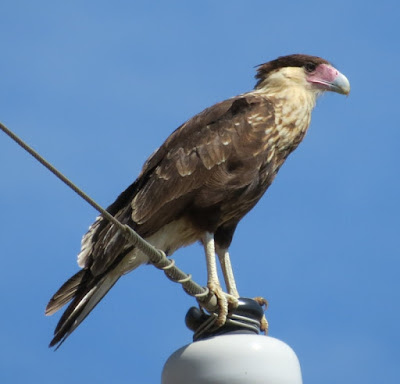 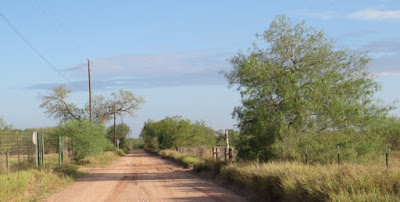 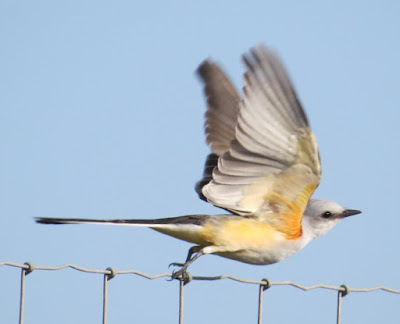 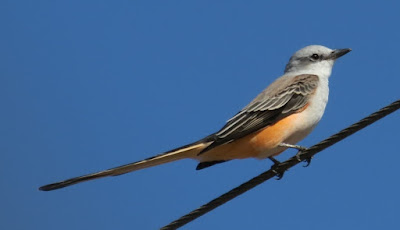 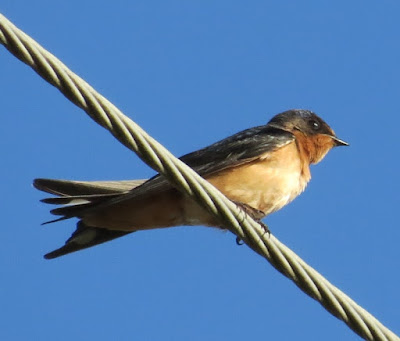 This could be a young Barn, as the tail is rather short (both males and youngsters have orange breasts) 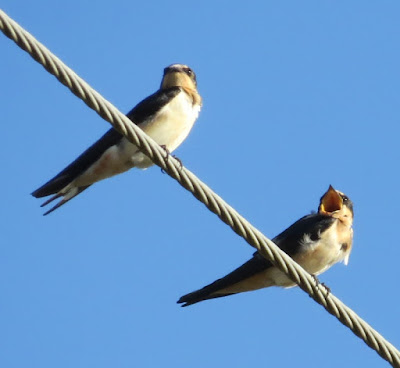 Mouthing off at a bird landing off-camera... 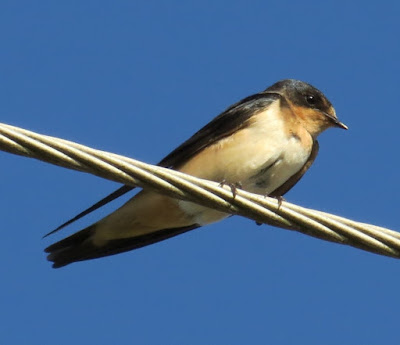 Females have whitish underparts (giving me the evil eye below...) 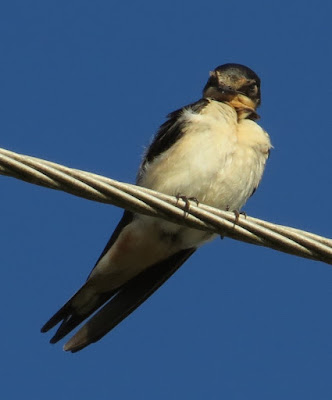 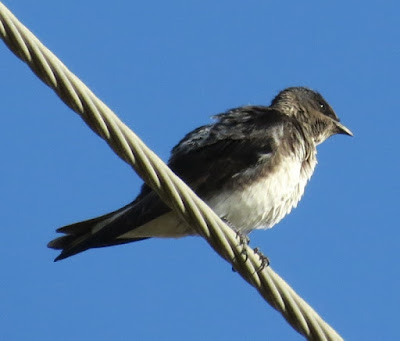 One of the two Purple Martins sharing the wire 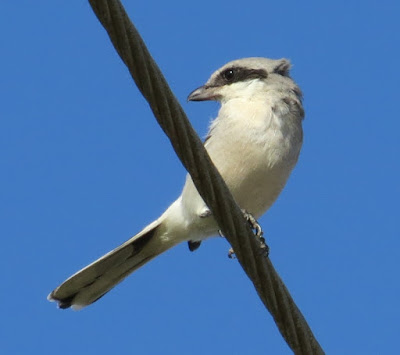 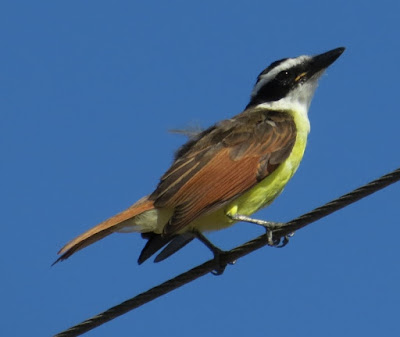 
I had told my friend Joyce that, after the survey, I’d probably go look for the vagrant Red-necked Phalarope that Dan Jones found at Sugarhouse Pond, so I headed over there, picking up a Swainson’s Hawk on the way.  She met me there and we scanned through hundreds of shorebirds trying to find that one little Redneck!  The light was perfect, and several other birds came quite close to the shoreline where we were standing, so we got good comparative looks at all three small peeps, lots of Stilt Sandpipers, and snappy-looking Avocets a little further out.  A single Roseate Spoonbill added some color while a long line of brown ducks (probably Blue-winged Teal) were further out.  Picked out a bug-eyed Least Grebe while scanning, and way out there were lots and lots of Wilson’s Phalaropes; normally, when they’re a little closer, a Red-necked is pretty easy to pick out, as they’re noticeably smaller and more distinctly marked than the paler Wilson’s, but at that distance (especially with the heat waves starting to kick in), it was practically a lost cause.  Thankfully the reported Ruddy Turnstones, which are rare in Hidalgo County, came wheeling in and gave us decent looks!

Joyce scours the shorebirds for the lost Red-necked Phalarope 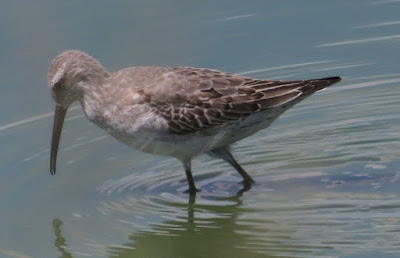 One of many Stilt Sandpipers feeding close by 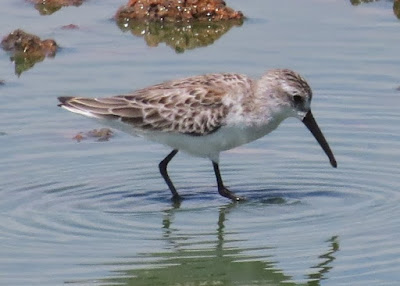 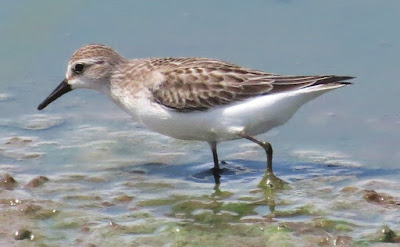 I initially ID'd this bird as a Semipalmated, but structurally it looks a little lanky; feedback welcome! 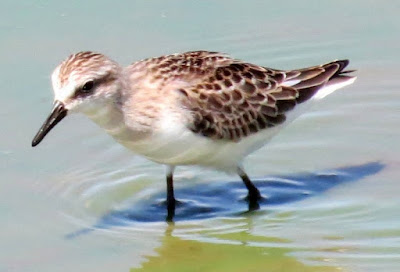 I felt comfortable calling this one a juvenile Semipalmated based on the scaly back and the little quivering call notes it was making, which I've only heard in recordings of Semipals. 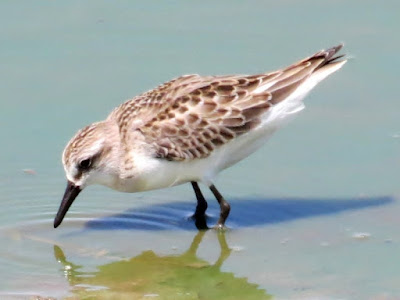 View of Sugarhouse Pond and mass of birds 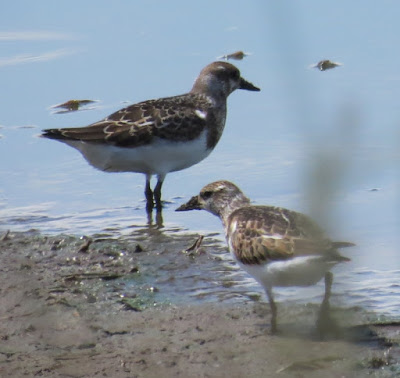 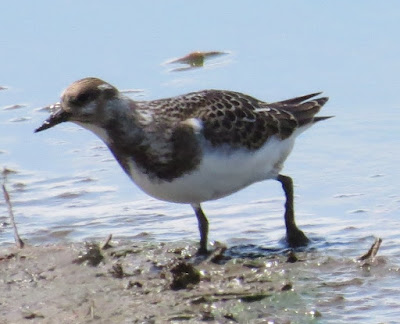 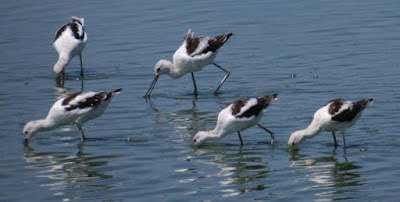 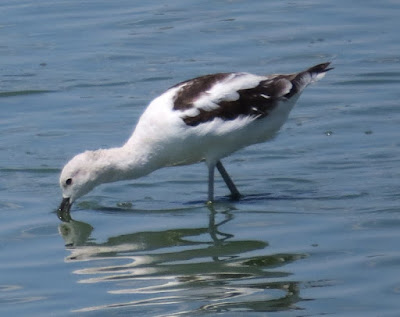 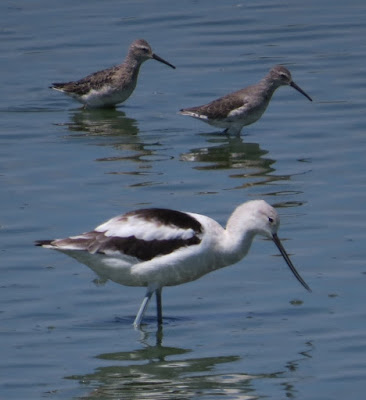 With Stilt Sandpipers behind

After awhile the heat started getting to us, so we called it quits and headed back home.  Bird List: