Last Stop on a Long Journey

Bill and Sue were wrapping up a month-long trip exploring areas in the American West, and decided to top off their visit in the LRGV!  One of the surprises, they admitted, was that the area was so lush – they expected it to be a desert!  Well, true – you don’t have to go too far west before you are in the desert, and maybe even Tamaulipan thornscrub is considered a “desert” habitat (we certainly get “desert” associated birds such as Verdin and Pyrrhuloxia), but we also have that Rio Grande riparian woodland habitat, to say nothing of “old growth” neighborhoods!


Our first stop was Estero Llano Grande SP, and the “Tropical Zone” certainly qualifies as a “woodland”, even if many of the trees are non-native!  It was rather quiet when we arrived, but strolling the loop we managed to spot the pheasant-like Chachalacas, the noisy Kiskadees, and even the Beardless Tyrannulet allowed a fleeting glimpse as it shot overhead!  At the water feature a Wilson’s Warbler came in to investigate, and while an Olive Sparrow sang, it never showed.  Swinging around the back we got great looks at a Black-crested Titmouse family, the grown youngsters still fluttering their wings at Mummy and Daddy, and a bird we’re currently calling just a very strongly-marked Curve-billed Thrasher – I’ve seen individuals with prominent spotting before, but this guy almost looked like he might have had Long-billed Thrasher blood in him, his spots (some which appeared almost streak-like) were so dark!  A more normal-looking bird sat and called overhead. 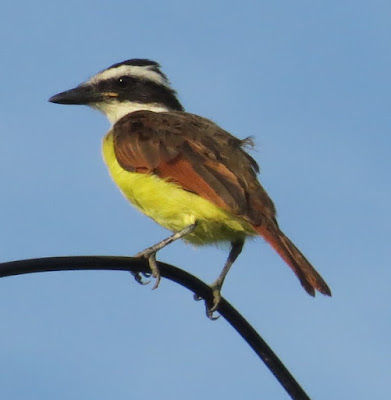 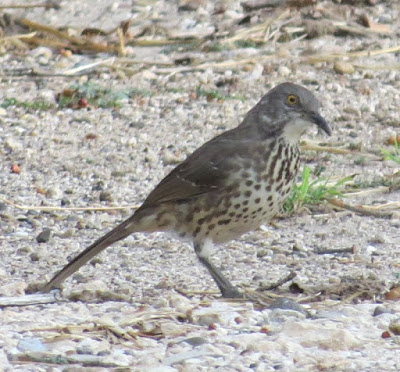 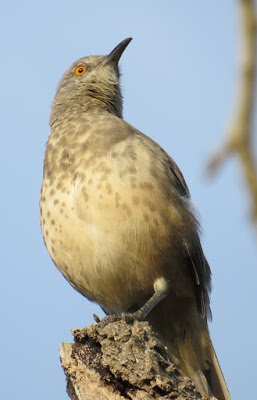 Arriving at the deck we were met by Ranger John who had just put out the hummingbird feeders, announcing that an Altamira Oriole almost sat on him!  Well, we waited around for about 15 minutes, and no oriole L, but the hummingbirds were really putting on a show:  the resident Buff-bellies made regular appearances, while the (presumed) Rubythroats chased each other and guarded the feeders aggressively.  Bill found his life Least Grebe in Ibis Pond, but alas, no White-faced Ibis that would have been a life bird!  There were plenty of Blue-winged Teal and Black-necked Stilts about, however. 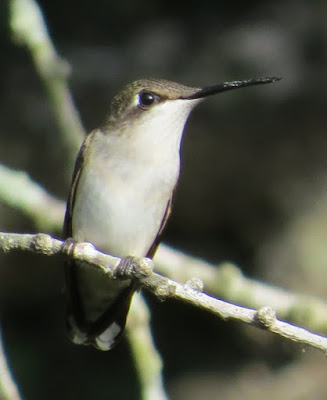 Probable female or juvie Ruby-throated Hummingbirds (Black-chinned is virtually identical, but Ruby-throated is more likely this time of year) 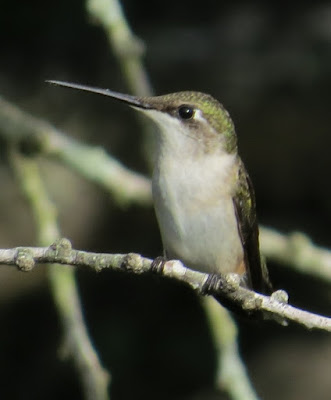 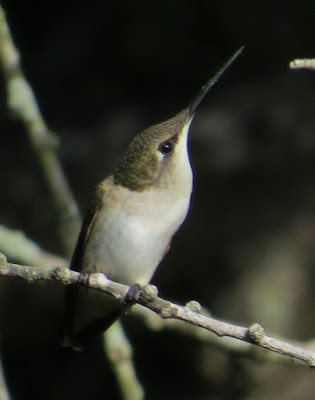 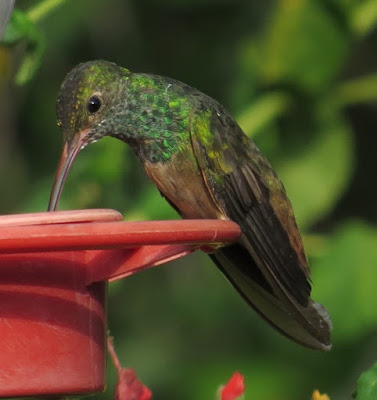 
Heading straight to Alligator Lake, we made a brief stop at Dowitcher Pond where a whole pod of Least Grebes was hanging out.  After crossing the little footbridge I had just warned Bill that the Green Kingfisher sometimes likes to hang in the canal, when he suddenly spotted one that had just come up from a dive!  At Grebe Marsh a couple of Belted Kingfishers rattled while a Lesser Yellowlegs fed across the way, and a White-tipped Dove posed for scope views.  Alligator Lake had a couple of Yellow-crowned Night Herons, but I was sweating a little when the Pauraque wasn’t in his usual spot by the barrier!  I wanted to quickly check out the other spot at the foot of the overlook, but we all ended up going and thankfully, there was the “backup” Pauraque almost right next to the trail!  What a great look!  After picking up an Anhinga at the overlook, we walked back by way of the Screech Owl hole, and there he was, glaring at us and looking cute at the same time!  Sue also spotted a hiding Long-billed Thrasher, so that was nice to compare him to that spotty Curve-billed! 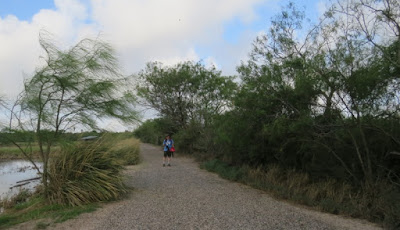 Bill enters his latest sighting on his app! 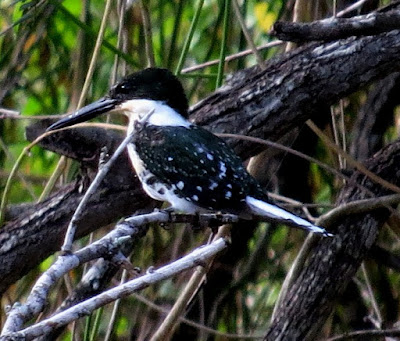 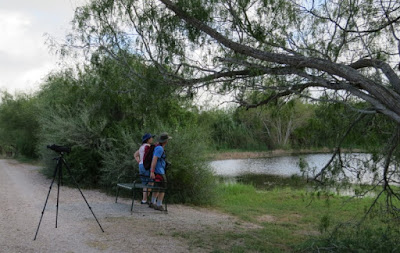 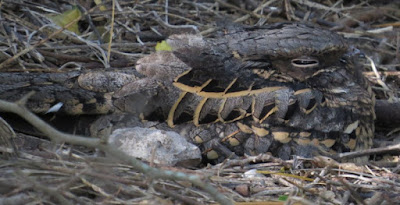 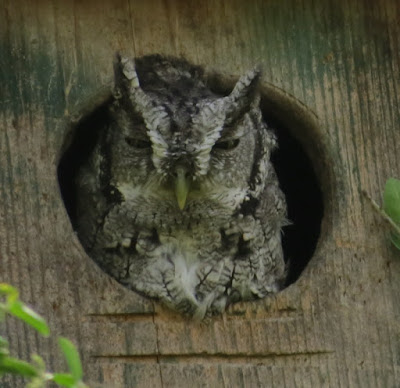 From there we headed straight back, chilling on the Spoonbill Trail boardwalk for a bit when a Wood Stork sailed high overhead!  After enjoying some friendly Least Sandpipers, we then sat at the feeders again for a little bit, but the best bird soared overhead:  Bill’s life Swainson’s Hawk!  With the time we had left I had initially thought of going to Frontera, but with the heat, we’d only be there about 15 minutes before we’d have to head back, so since Sue had wondered aloud if there was a way to see into Mexico without having to hike to the river, I mentioned Anzalduas Park, so we headed over there to check it out!  I showed them the famous “Sprague’s Pipit Field” (an incentive to come back in the winter J), then we checked out the river, which was pretty empty (although they were impressed with the pretty park across the way in Mexico).  I heard a Black Phoebe (which they didn’t need, so we didn’t track it down), but at a potty spot we were able to bag another life bird for Bill (albeit a female):  a perky Vermilion Flycatcher! 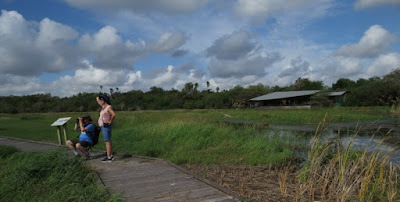 Chilling out on the Spoonbill Trail 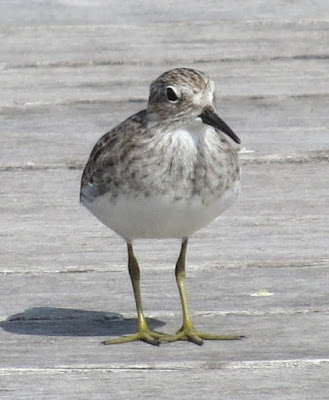 Friendly Least Sandpiper and his three buddies below 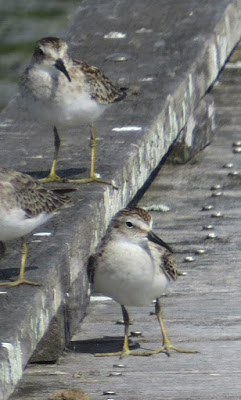 It was time to head back for siesta after that, and for the afternoon shift (and after pondering those target birds Bill mentioned) I decided to take them up to Edinburg Scenic Wetlands first, as a Ringed Kingfisher had recently been reported there.  We headed in and were immediately greeted by Marisa Oliva (the director) and a couple of her helpers who were working on their new water feature!  They chatted while Monica took our money J, then we headed to the North Pond.  By that time I had realized I had forgotten my scope, so I left them at the overlook enjoying Neotropic Cormorants and egrets while I headed back to the car.  When I got back they both greeted me with big grins and said, “That’s what happens when you turn your back!”  A big ol’ Ringed Kingfisher had popped up on the opposite side, showed off, then took off!  Thankfully the thing called a little later so I could log it myself, but we also had a pair of Belted Kingfishers making a racket.  I had heard a “ringing” Clay-colored Thrush on my way back from the car, so we took the Jungle Trail in hopes of finding it, and I did indeed get a glimpse, but what did pop up for a few minutes shortly thereafter was a female Summer Tanager! 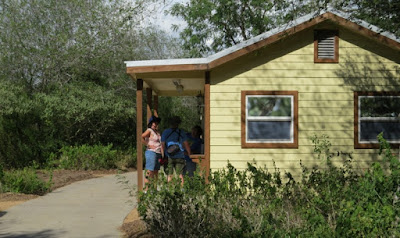 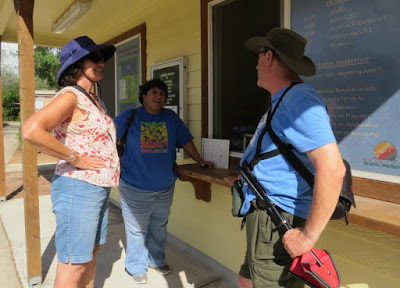 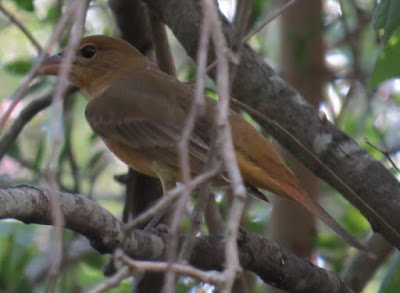 From there we headed up and over to Wallace Road.  That proved to be a good choice (always preferable to road-bird in the heat of the day anyway), as we had a great raptor show in the form of a flyover White-tailed Kite, several Swainson’s Hawks, and a young White-tailed thrown in for comparison!  Several Lark Sparrows posed on wires, and down at the wetlands Bill spotted a gorgeous Harris’ Hawk!  Most of the wetland area was dry, but there was enough water to have a few shorebirds – just not the White-faced Ibis or Fulvous Whistling Ducks we were hoping for! L 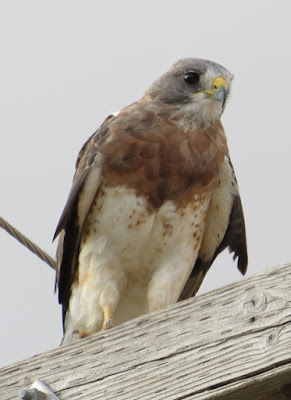 Swainson's Hawk (ready to book below) 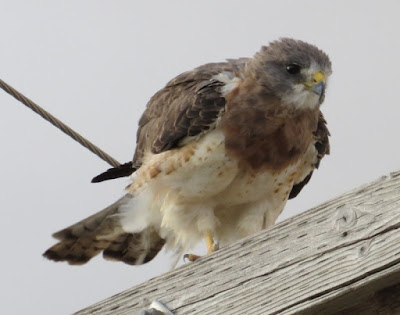 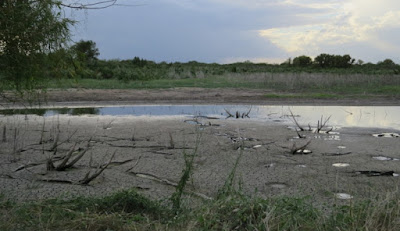 He was also interested in bagging a Roadrunner, so I gave them the choice of continuing road-birding in good Roadrunner habitat until sunset, for make a run for the parrots in McAllen.  They chose the parrots, but unfortunately we dipped on them. L Another reason to come back!  All told, we didn’t do bad, logging 90 species for the day! 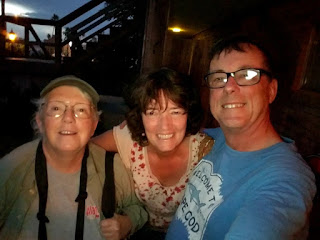 Selfie back at the Inn...