When the Highlight Isn't Even a Bird...

Terry and her friend Peggy were from Austin and had visited the Valley many, many years ago, but wanted to come down to add a few year birds to their lists (and maybe even a lifer or two J)!  After much discussion we decided that a trip up to Starr County would be productive, so since the high was supposed to be near 100, we left the Inn at 5:30 to get up there around sunrise!  That turned out to be a good decision, as it was a beautiful, sunny, calm, and cool day to start!  On the way up a Lesser Nighthawk batted low over the road!

Our first stop was Falcon (Starr) County Park to see if any Red-billed Pigeons were about.  They normally feed on the Coma berries this time of year, but it looked like the trees were pretty fried by the hard freeze, so no pigeons this time… L  But it turned out to be a great stop, with a Bullock’s Oriole whistling and giving us great views right away, a Loggerhead Shrike on top of a tree, and a Cactus Wren giving us what for from a concrete picnic table!  A loop around the park added Lark Sparrows, a pair of Vermilion Flycatchers, an Ash-throated Flycatcher, and three Scissor-tailed Flycatchers frolicking around!  Our first Pyrrhuloxias of the day gave great views from a sun-drenched bush along with a Hooded Oriole, and on the south side two Curve-billed Thrashers ran along the ground. 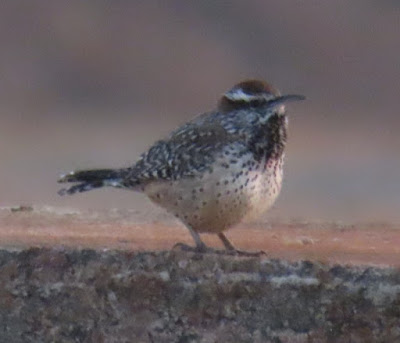 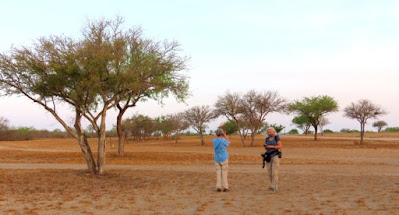 From there we headed for the Dump Road in hopes of some of the more scarce desert species; pretty much dipped on those, but a distant Caracara was nice, and the stars were a pair of Roadrunners closer to the town, along with a pair of House Finches on the ground (not very exciting to them, but still kinda cool down here, as these are the Mexican subspecies)! 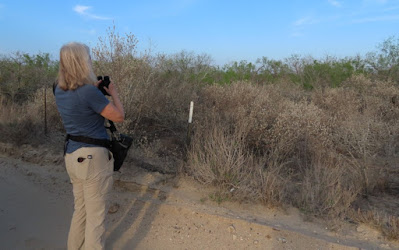 Terry on the Dump Road 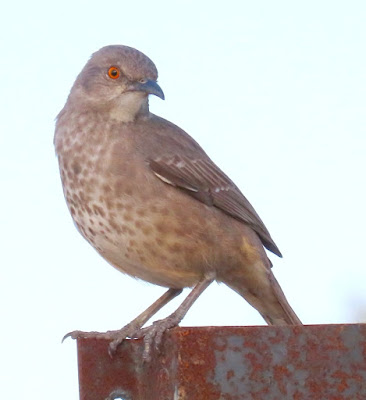 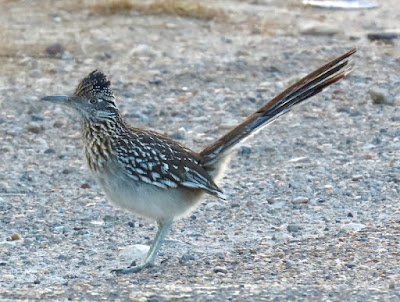 Bumping down the River Road we heard a Blue-headed Vireo singing, and finally saw a Spizella well enough to nail it down as a Clay-colored Sparrow.  Down at the bottom we were treated to a lovely reflective view of the Rio Grande where we spent a few minutes checking the water:  a beautiful male Redhead was a treat, along with a handful of female Lesser Scaup and a Least Grebe.  About a dozen Neotropic Cormorants flew overhead, and the requisite Spotted Sandpiper flew down the river.  Peggy spotted a Green Heron land, but we could find no other specialties.  I was getting ready to check downriver when an Audubon’s Oriole started singing, so we were off down the trail as that was a life bird for Terry!  He was playing games with us – he’d quit singing, so we’d continue on, then he’d start up again, but we could never find him!  This kept up for a while (another birder named Larry joined us at that point) until finally the perp gave a decent view!  (Couldn’t tell if it was “Baldy” or not… J) 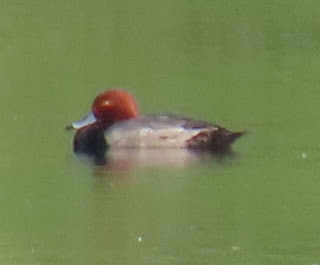 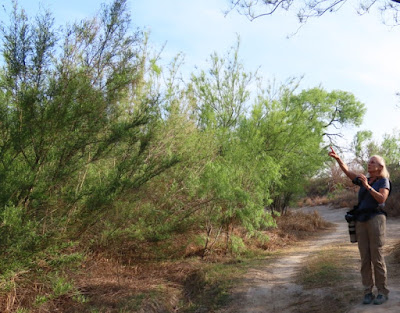 Terry points out the Audubon's Oriole (below) 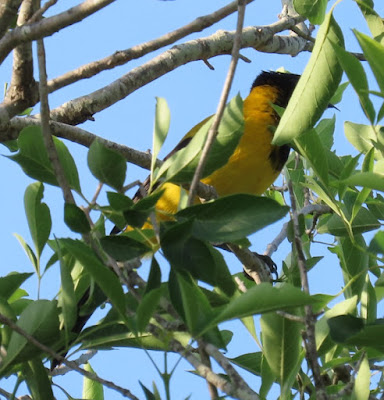 Finally we continued on, hoping against hope for the seedeaters, but we did have a gorgeous Cardinal sing for us over the trail.  A Summer Tanager sang in the distance (never spotted him, either), and Olive Sparrows also sang unseen from the bush.  Once at the end of the trail we spent 15 minutes just waiting to see what would come by, and the highlight for the girls just happened to be perched on a dead snag across the way – a pearly Gray Hawk!  We also had a Long-billed Thrasher say hello (briefly), and a Ringed Kingfisher made two overhead passes! 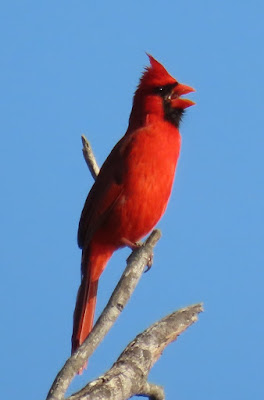 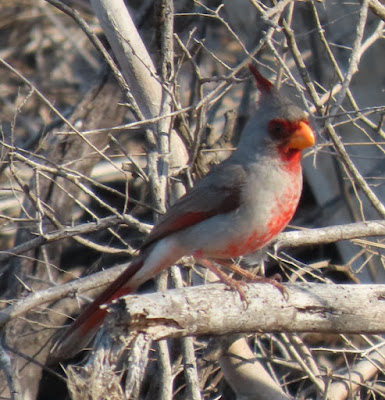 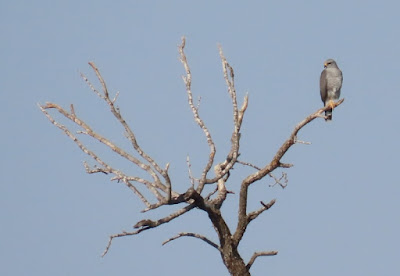 Gray Hawk on the Mexican side 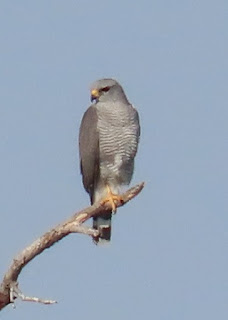 Close up of the Gray Hawk

We headed back with no seedeaters or pigeons (Larry thought he had one earlier that morning but it was too fast for him), so we headed on to Falcon State Park, picking up a covey of Bobwhite as we were closing out the eBird list!  Crawling slowly along the entrance road bagged us another Ash-throated Flycatcher trying to make a nest in a sign pipe, a singing Painted Bunting, and a nice Harris’ Hawk on a pole!  Once in the park we found a bench in the butterfly garden and had our lunches, being serenaded by a Common Ground Dove.  Park Host Mike was taking a break at the Island, so there was no feeder watching to be had at his spot, so we crawled around the roads seeing what we could see. 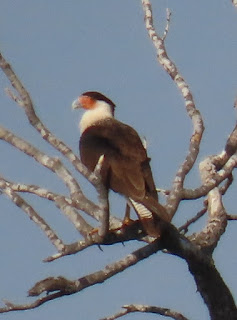 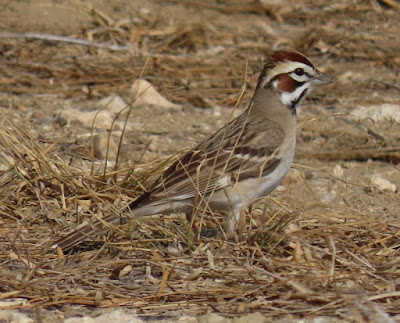 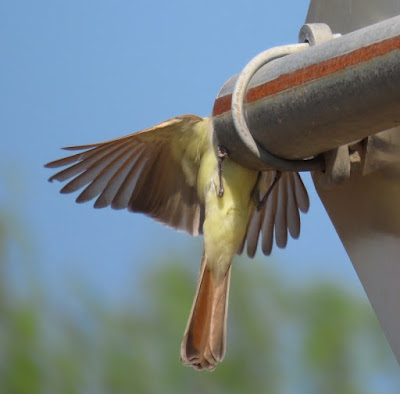 The first place I check is usually the primitive camping area; here we had a pair of meadowlarks that we sweated over (turned out to be Eastern based on the lack of yellow on the malar, plus the fact that eBird would have flagged Western this late…), and a couple of calling Couch’s Kingbirds. 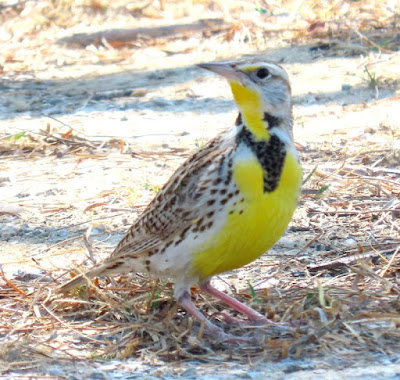 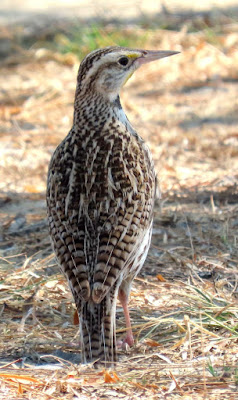 Next was the boat ramp area, where we had a gorgeous Pyrrhuloxia singing right out the window!  We four-wheeled along the lake edge and had Great, Snowy, and Cattle Egrets on a spit out in the area where the Mountain Bluebirds had shown up last winter!  A couple of Laughing Gulls were there as well, along with a Gull-billed Tern that flew over and eventually gave its nasal call.  An Osprey sat on the far shore, and a Least Sandpiper came close enough to discern its yellow legs!  (We also heard some Eastern Meadowlarks singing across the way to assuage any doubts…)  The park had graded a really nice, wide road going down there (maybe that was the makeshift boat ramp, as that’s where all the trucks and boat-trailers were), so we went back that way and spooked up a Vesper Sparrow and another Clay-colored in the bushes!  Gave the girls a rush as I thought I was approaching one of the steeper side roads connecting with the main dirt road near the old boat ramp, but I was actually approaching a cliff!  Good thing I saw that in time! 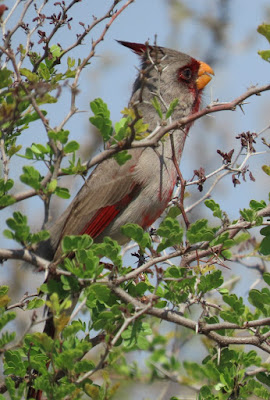 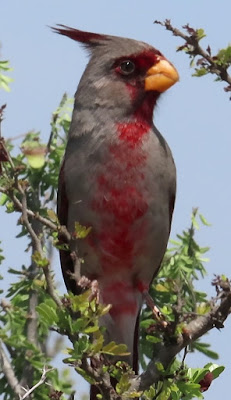 We then bypassed the rec area and went straight to the picnic area; we stopped for an odd shape in the middle of the road that turned out to be a Texas Horned Lizard, a “life reptile” for both of the girls!  (And I could count on the fingers of one hand the number of times I’ve seen one since moving here!)  He was quite entertaining as he at first maintained the typical upright pose, then flattened out like a pancake as we snuck around to get better light for pictures!  We had a very difficult time trying to convince him to get off the road, however; no wonder it’s easy for kids to capture them as pets! 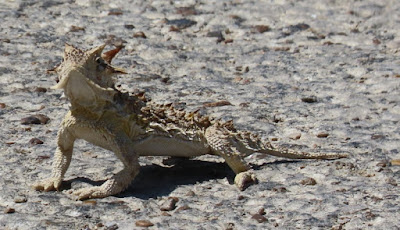 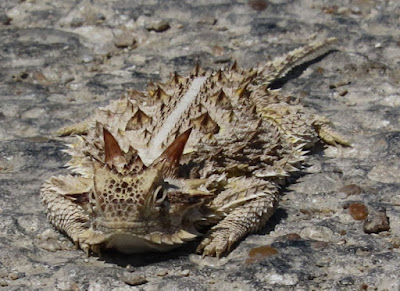 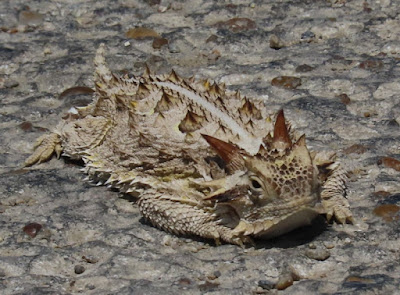 Made a circle around the shelter area where Terry spotted another Roadrunner in a tree that stayed put even as she crept around to get an unobscured picture!  A Cooper’s Hawk batted overhead as well, and a quick run through the hookup area bagged another Pyrr and Roadrunner. 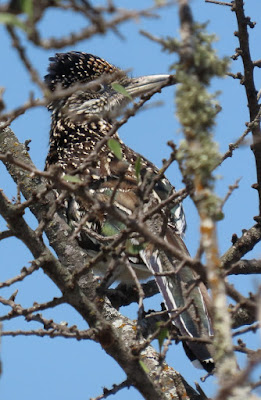 Had to head home after that, but we ended up with 75 species, which is incredible for Starr County, especially without the benefit of the Salineno feeders!  Bird list: