Met Jackie, an enthusiastic gal from Denton, Texas, outside the Garden Suites and decided I would drive her rental (seeing as I’m such a control freak when it comes to driving down here)!  We had been going back and forth for a while regarding an itinerary, as she had a very organized wish list, but spring migration being what it is, we wanted to be flexible (although Valley specialties were a priority)!  I had suggested La Sal del Rey as she had a few birds on her list (like White-tailed Hawk and Common Ground Dove, along with some specialties) that could be found there, so we headed up there first, but not before starting the morning with our nesting Curve-billed Thrashers right there at the suites!

We picked up several Caracaras on the way up, and once we turned onto North Brushline, we hadn’t gotten far before spotting a Golden-fronted Woodpecker in a tree, a Pyrrhuloxia on a wire, and hearing Cassin’s Sparrows singing and Turkeys gobbling in the distance!  We pulled over about a mile down and got out, trying to pull out Verdins and a singing Long-billed Thrasher, but they were stubborn.  However, a much-wanted Olive Sparrow was singing close by, so we tried a little coaxing, but with apparently no response.  We were getting ready to get back in the car when I heard the thing quietly “talking” near the fence, and there he was!  Jackie got a great look, and commented that he was so much more pretty in person than in the book! J 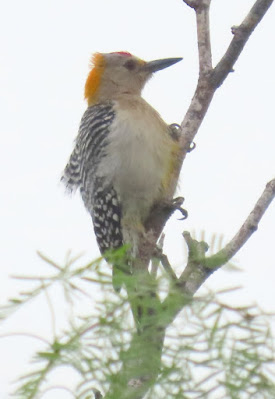 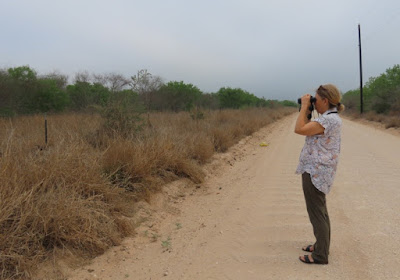 Other “wanted” birds called way in the distance (like Brown-crested Flycatcher and Green Jay), but about that time the cold front rolled in, and she wondered aloud if it might be more productive to go somewhere where we might get some migrants.  So we turned around and headed down to Frontera Audubon, picking up Scissor-tailed Flycatcher and a Swainson’s Hawk on SR 186.  We made a brief stop at Delta Lake, where it looked pretty empty to start (the water was high), but added both flavors of vultures, Blue-winged Teal, Mottled Duck, Coots, Laughing Gulls, and a swarm of Cave Swallows overhead!  The other bank had a Great Egret and a young Black-crowned Night Heron flying around.  A Black-necked Stilt flew over the road while crawling through Elsa…

Checking out the west side of Delta Lake 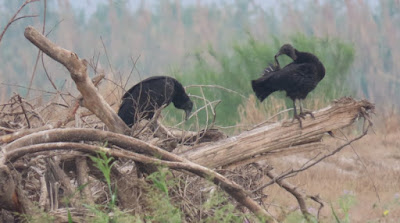 Frontera can be a good migrant trap if conditions are right, but that north wind hadn’t arrived by the time we got there, and it became hot and sunny!  Plus the resacas were either low or dry altogether (except for Payne Pond), so no kingfishers were to be had… L  But Jackie was delighted as another of her “most wanted birds”, a Chachalaca, posed on the trail!  It wasn’t long before they started chorusing, but try as we might, we just couldn’t spot a pair out in the open!  Despite the low water level, we took a quick look at the pond deck, and the highlight there was a “Turkey Vulture” that morphed into a Zone-tailed Hawk!  Jackie was amazed as she admitted she wouldn’t have given it a second glance as it acted just like a TV, but the hawk’s head gave it away (and being an immature, he didn’t have the banded tail which would have been the other clincher)! 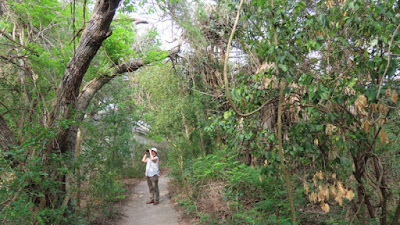 From there we just slowly checked the trails:  one side trail had a little action where Jackie flushed her first Pauraque!  A Long-billed Thrasher also gave her a good look, and a White-eyed Vireo deigned to let us see him.  A peek into Payne Pond produced some Black-bellied Whistling Ducks, but that was about it.  Near the Sabal Palm grove Jackie got a good look at a White-tipped Dove, and a male Common Yellowthroat gave great looks.  We ended up making a wrong turn and ended up at the feeding stations; that was perfectly fine as Jackie got a big kick out of the Chachalacas clamoring all over one of the feeders trying to get some seed!  We sat for a bit and only saw a White-winged Dove and a Cardinal (same at the other station), so continued on the trail, where Jackie spotted one of the Chimney Swifts I had been hearing earlier – she was very excited about that! 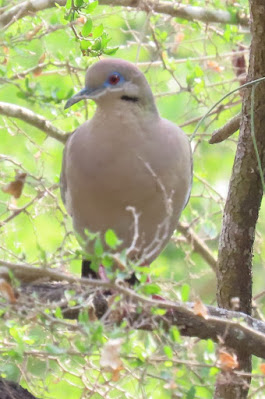 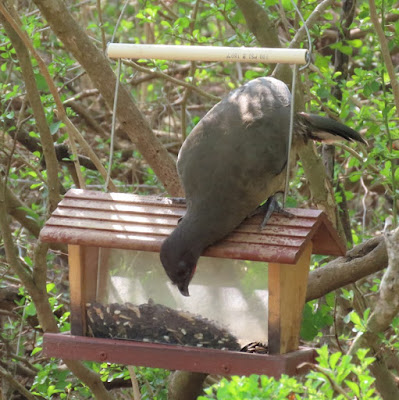 Chachalaca trying to figure out the feeder

We decided to swing around on the trail that I missed the first time, where we heard a Clay-colored Thrush give all his vocalizations, but just didn’t wanna play ball…  At the dry water drip a family of Chachalacas nonetheless stood sentry, and we got some cute titmice to come in close!  Going down the Dead End Trail bagged us brief looks at a Buff-bellied Hummingbird, but the highlight was yet another nightjar that we flushed back on the main trail; I assumed Chuck-will’s-widow (as that’s usually what I kick up in here), but Jackie saw it land and we were both able to get on it (and I was able to photograph it):  the light wasn’t the greatest as it had dappled sunshine on parts of it (particularly the crown which apparently is one of the deciding ID factors), but the overall grayish coloration, the thin white border around the dark throat, and mottled breast made me think Whippoorwill (and the bird also showed buffy corners to the tail when it flew, but females of both Whips and Chucks can show that).  Looking at the pictures on the computer later, the crown appeared to have a darker area in the center of the crown (which is good for Whip), so I felt better about the ID! 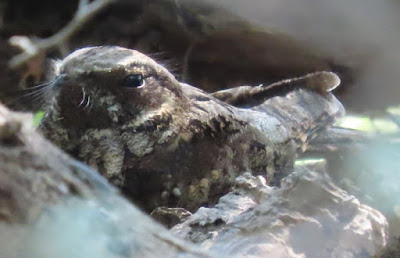 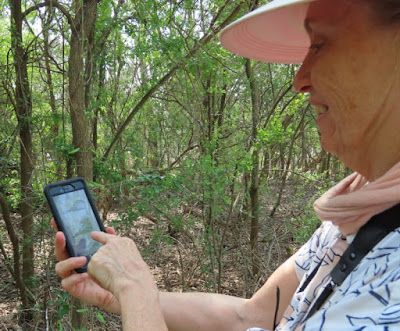 It was time to head home after that, but we spent an extra five minutes at the water feature, adding a Blue-headed Vireo by doing that!  Even back in the parking lot we got distracted trying to find an uncooperative Hooded Oriole, but a very friendly Carolina Wren popped in briefly!  On the way home a “conference call” with my friend Pat resulted in the planning of an afternoon trip to Estero Llano Grande for her and Jackie (the Yellow-faced Grassquit showed up again), and after dropping Jackie off at the suites, a pair of Green Parakeets went screeching over – another unexpected life bird!

We ended up with a modest 57 species for the morning.  Bird list: