Cleaning Up the Valley Birds

Frank and Amy were a couple of fairly new birders who managed to escape the work place long enough for a quick vacation to a new birding area!  They picked me up this morning so Frank could do the driving (he’s driven all over the world so I figured I could rest easy, control freak that I am… J) and told me they had already logged over 140 birds with Roy Rodriguez on the coast, and Huck Hutchins at Estero Llano Grande!  I warned them ahead of time not to expect a big list for Starr County, but they said that was fine – their “short list” included targets that could only be gotten upriver, so upriver we went!

Went to Salineno first thing and were greeted right away by a subadult Yellow-crowned Night Heron at the boat ramp!  I had intended to check the river first, but the sad, plaintive whistles of two Audubon’s Orioles practically over our heads sent us to the trail!  Even though they sounded “exposed”, the birds were pretty well hidden, but eventually both Frank and Amy were able to spot them!  While still in the parking area last week’s Ringed Kingfisher made a repeat performance by announcing her presence unseen with a loud Crack! flight call, then appearing over the trees for a great look!  Truthfully, we didn’t see much along the trail except a Common Ground Dove (which was nonetheless a life bird for them), but at the cul-de-sac had a Bullock’s Oriole where the Gray Hawk was sitting last week, a Coot in the river, a flyover Osprey, and a Rough-winged Swallow zipping by (also a lifer), but only heard the seedeater, way too far away to even hope for a glimpse. L  A flying duck got us excited as we were leaving, but it turned out to be a female scaup…  Rolling through the little town some Purple Martins on a shelter were fun! 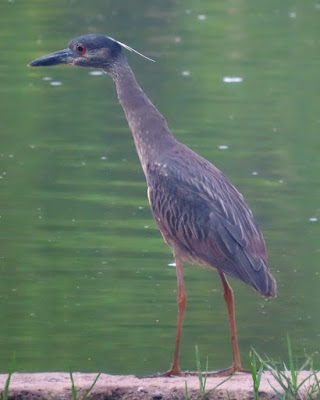 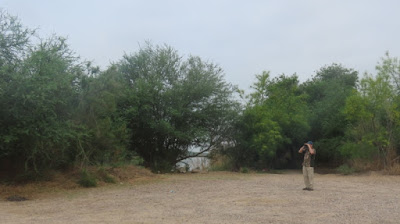 Frank checking out the Rio Grande from the Salineno parking area

Amy and Frank at the end of the Seedeater Trail

We stopped at the foot of the Dump Road Route to do the eBird list, but got distracted by some little birds jumping around in the bushes that turned out to be Lark Sparrows!  But while we were enjoying them a couple of Painted Buntings came in and stirred things up!  Amy had seen something larger, but whatever it was fled the coop before any of us could get a look…  Once on Old School Road (which connects Salineno Road with the Dump Road) a brilliant Pyrrhuloxia landed on a power pole just before the turnoff – Frank was thrilled as he was able to get a wonderful photo! 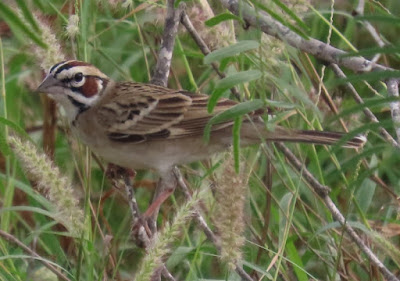 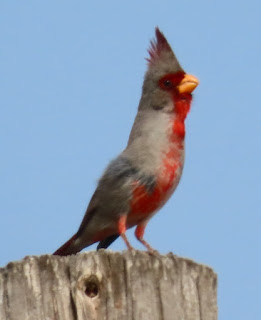 Once on Dump Road (Frank and Amy were aghast at how well it lived up to its name L) we heard lots of stuff but not much wanted to show: the Cactus Wrens were stubborn, but we at least got a distant look at a Bewick’s Wren.  Even the Roadrunners were unresponsive to my messin’ with ‘em and only gave us brief looks!  At one point I ordered (nicely J) Frank to stop – there was a nighthawk perched on a limb!  (With all my talk of having lousy eyesight he was amazed that I spotted the thing… J)  Because of the way it was sitting, a definitive ID was difficult, but Frank saw it fly as he approached the side of the road and said the band was definitely closer to the tip of the wing, so we called it a Lesser.  In the same tree was a female Brown-headed Cowbird and a gnatcatcher I tried real hard to turn into a Black-tailed, but it was definitely a Blue-gray…  The Verdins were also frustrating, and although one did come in to some coaxing, we just couldn’t get a good look, while two Nashville Warblers were more than cooperative!  While all this was going on the Harris’ Hawk pair circled around near “their” windmill!  A Kestrel on the wire got everyone excited, and unlike the other songbirds, a singing Black-throated Sparrow came right in! 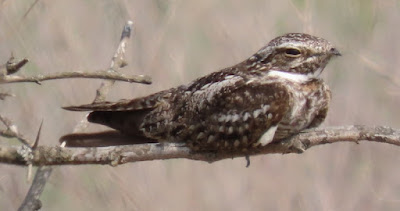 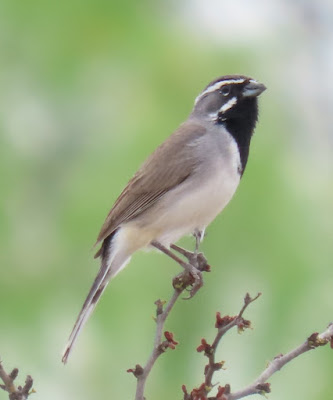 From there we headed straight to Falcon (Starr) County Park (I didn’t really expect the pigeons but I thought we’d try), where the shrike pair greeted us right away!  The Vermilion Flycatchers were definitely a hit, along with both Ash-throated and Scissor-tailed Flycatchers.  The staff at Falcon State Park was out to lunch, so I filled out an envelope while a Hooded Oriole sang behind us.  A pair of Caracaras gave great photo ops, and in the primitive camping area had a flock of Chipping Sparrows (tried hard to turn one into a Clay-colored), and the Cactus Wren finally came out.  Couch’s Kingbirds called unseen, while a female Summer Tanager hid in the bushes.  One Ash-throated Flycatcher was particularly cooperative for videos and vocalizations! 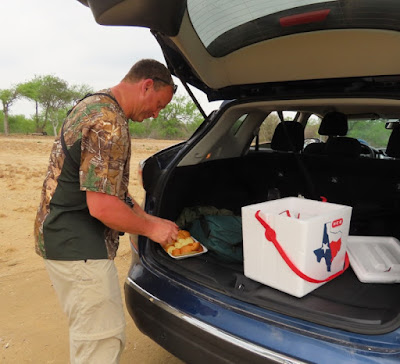 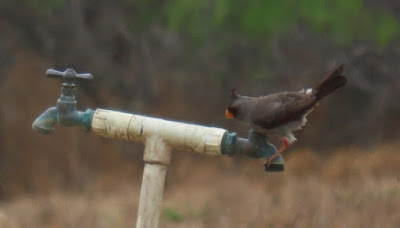 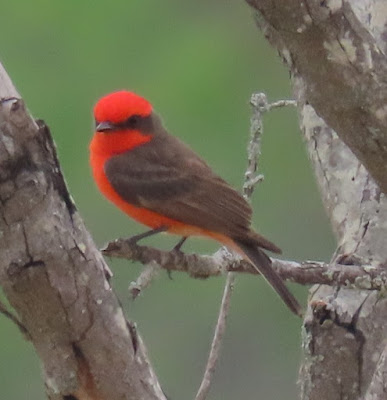 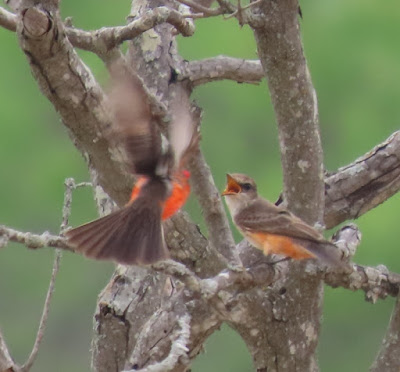 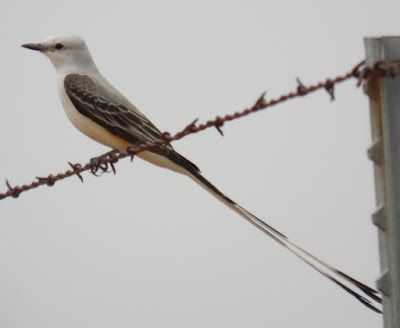 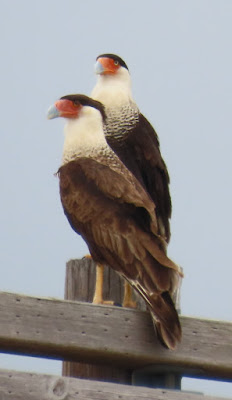 Crested Caracaras (the one in front is a younger bird)

Frank checks his flycatcher photo in the primitive camping area 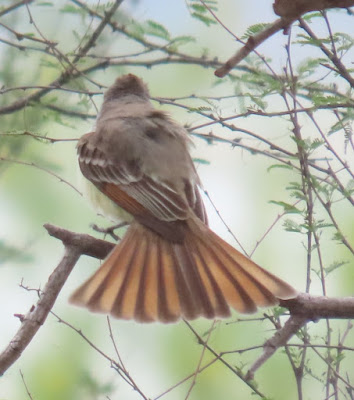 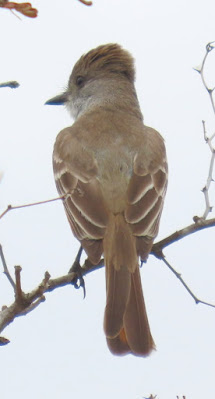 Frank was okay with “off-roading” so we bounced down to the lake edge while a weird-sounding meadowlark sang across from the boat ramp.  We had the usual water birds:  the spit had over 100 Neotropic Cormorants that were grunting, plus three Black Skimmers (that didn’t get flagged by eBird, so I guess they’re somewhat expected)!  After our romp we braved using the pit toilet and were rewarded with a Brown-crested Flycatcher!  We then rolled into the picnic area and took a little hike which kicked up nothing, but on the way out ran into park host Mike Ebersol who directed us to his camping spot for feeder birds!  Hit the jackpot there:  when we pulled up a Peccary was grazing, along with a Pyrrhuloxia on the seed tray!  They of course split when we came around to sit at the bench, but after a while stuff returned, starting with two Long-billed Thrashers along with a Curve-billed, Cardinals, Inca Doves, a Green Jay, Lincoln’s Sparrow, both cowbirds, and a handful of Bobwhite!  I think that was Frank and Amy’s favorite, as she was pretty sure that’s what she saw that we could never get on at the foot of Dump Road! J 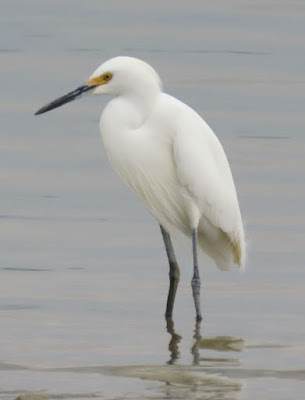 Neotropic Cormorants with Mexico in the background 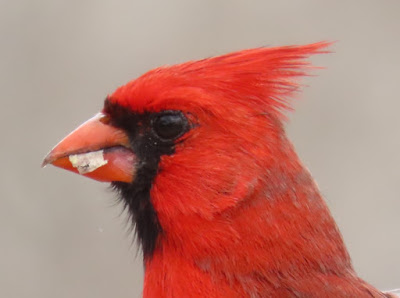 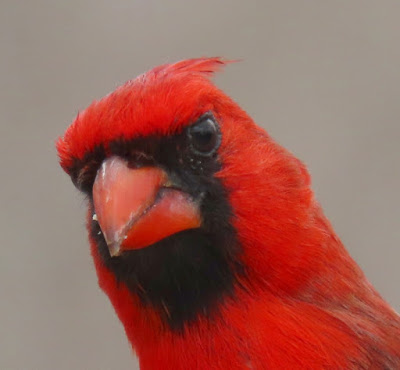 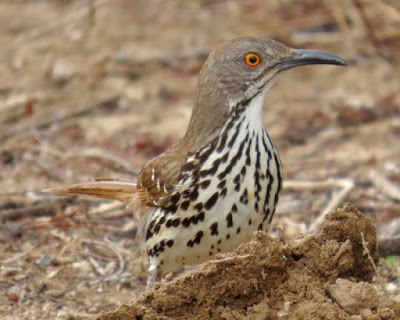 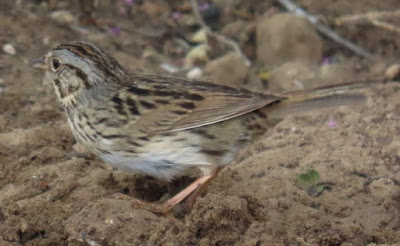 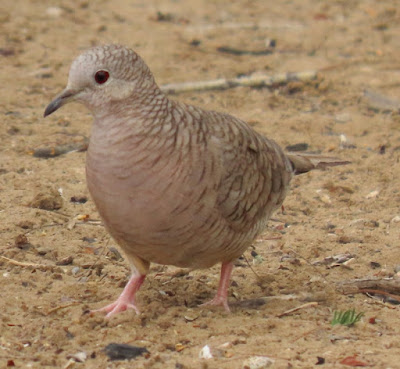 We had to head home after that, but ended up with a respectable 72 species for the day, which is pretty good for Starr County!  Bird list: