The girls were debating right up to the last moment whether to go to South Padre by way of the toll road (fastest route) or SR 100 to check the Aplomado viewing area (life bird for Peggy)!  Peggy won J so we headed out that way under foggy conditions.  We made a brief pit stop at the Stripes in Los Fresnos, and since we had driven separately because I only had a half day to give them and it behooved them to stay longer if they wanted, I led the way but actually beat them to the parking area by several minutes!  My heart sank when I saw the platform was unoccupied, but as I started scanning I heard “falcon noise” behind me, and there he was, up on the cell tower!  The girls rolled in about then, so I used frantic but subtle hand signals to hurry up and park because the bird was right there!  Peggy jumped out of the car and got her life look before it flew (I was commenting on our timing – a few minutes later and we might have missed it), but before long Terry spotted him winging his way back in for more great looks (just before the fog rolled in and obscured his view)!  While we enjoyed him we logged singing Eastern Meadowlarks and Olive Sparrows for the day. 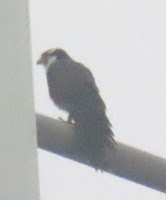 "Proof shots" of the Aplomado Falcon 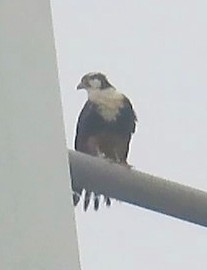 From there we headed straight to Sheepshead (after another pit stop) where the fog had lifted and it was nice and sunny, but pretty dead; even so, there’s always something during spring migration, even if most of the stuff is being blown over, and here the highlight was a female oriole that a gentleman from Wisconsin and I were debating (I called it an Orchard because it looked small and olive to me, whereas he was calling it a Hooded)!   I finally took some pictures and we scrutinized the bases of the secondaries, which did indeed indicate Hooded!  I admitted my error to the guy and we had a good laugh about it, but boy, those female orioles are tough!  A pretty Yellow-throated Warbler briefly came in to an orange, and a pair of Kiskadees fussed with each other on the “dark side”, but that was about it. 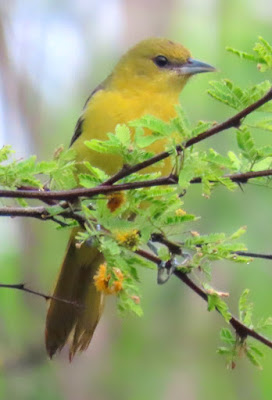 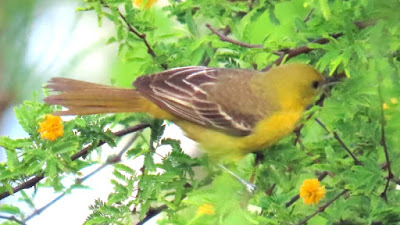 Note that the bases of the secondaries are gray right up to the borders of the coverts; an Orchard Oriole would show dark bases. 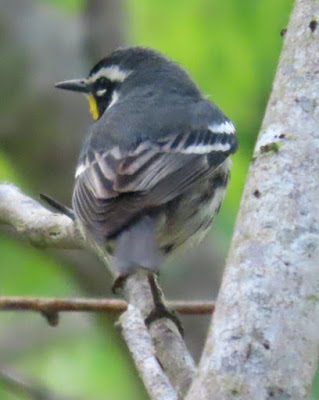 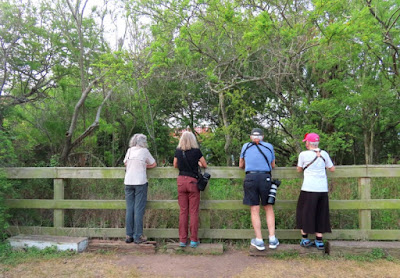 Checking out the "Dark Side" 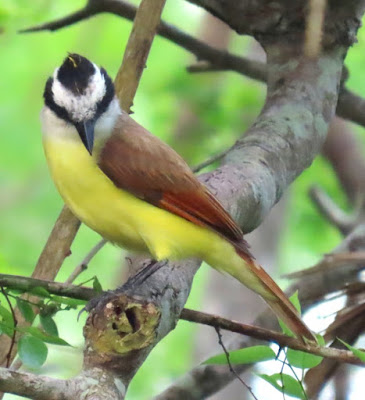 Great Kiskadee
Over at the Convention Centre, the old saying that there were more birders than birds came into play:  a Savannah Sparrow hopped up on the curb in the circular area, and there were a few Butterbutts in the “back yard”, but all the bird life was out on the Flats with tons of shorebirds and larids!  (We were all lazy and hadn’t brought the scopes, thinking there wouldn’t be much out there – ha…)  Peggy went back for their scope and I for mine, hearing a Sedge Wren singing in the grassy area next to the boardwalk on the way!  Back at the Flats, highlights included both Semipalmated and Piping Plovers, Marbled Godwits, and Dunlin coming into breeding dress.  Hemmed and hawed on some distant shorebirds that I finally decided were Stilt Sandpipers, but we definitely had some dowitchers, some even coming into breeding plumage!  Other goodies included a Black-bellied Plover, some Western Sandpipers, and the bigger Sanderling.  The Least Terns were back, and I was able to point out the vocal differences in Royal and Sandwich Terns.  The skimmer gang was way out there, along with several vehicles that were inadvertently moving the birds around L…  Some Blue-winged Teal were in the ponds near the boardwalk, along with a couple of Yellow-crowned Night Herons, and a Brown Pelican flying at us head on fooled Terry into thinking it was a raptor!  On the way back a young male Orchard Oriole came into the Bottlebrush tree, a beat-up Orange-crowned Warbler bopped around in another tree, and a brilliant Indigo Bunting added some much appreciated color! 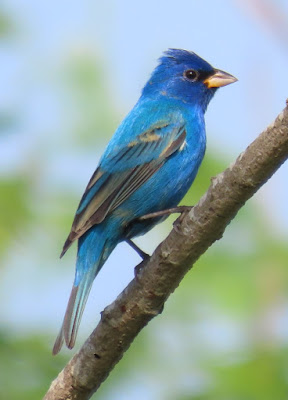 Out on the boardwalk we managed to add a spoonbill to the list (“East Pond”, as always, was right in the sun from our angle), and ran into birding buddy Tamie and Father Tom on the “mangrove” portion of the boardwalk!  Was still awfully quiet:  they had had a Hooded Warbler, and while we missed that, we did manage to pin down both Warbling and White-eyed Vireos!  Peggy spotted an “in-between” yellowlegs as we looked through a small window in the mangroves (where the bill didn’t look quite right for either species), but thankfully we logged both during the course of the morning!  Out on the pier we had a small pod of Pied-billed Grebes, and a gray-and-white thing out in the water got me excited about a possible loon, only a scope view revealed a red bill, making it a female Red-breasted Merganser…  A White Ibis fed along the edge of the mangroves, and on the way back another couple pointed out a Prothonotary Warbler that Terry was able to photograph (hopefully)!  A Marsh Wren was rickety-racking from the marsh, and a Little Blue Heron said hello on the railing.  A final vigil at the water feature produced a Ruby-throated Hummingbird, but that was it (some other folks had spotted an Ovenbird way back in the shadows).

The girls actually beat me to the Birding and Nature Center; when I walked up to the entrance table the only one behind it was Big Mac the Muscovy!  (Didn’t think he’d be very efficient at collecting the money! J)  Found the girls at the deck overlooking Songbird Alley and chatting with birding buddy Betty, who was working as a greeter!  Things were slow as far as migrants went, but there’s always something to be seen there:  A Spotted Sandpiper was getting his spots, a Green Heron was on the nest, and a Tricolored Heron was dancing for his dinner!  Sometimes the little dead end heading towards the tortoise area hides migrants, so we checked it out, but instead were blown away by at least 25 Alligators sprawled out in the enclosure below us!! 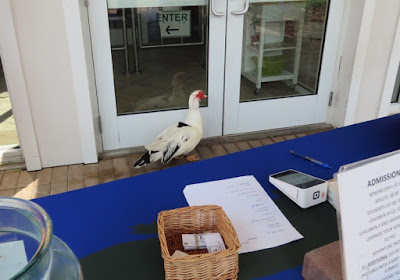 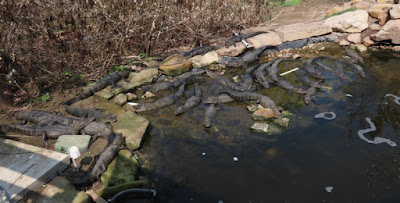 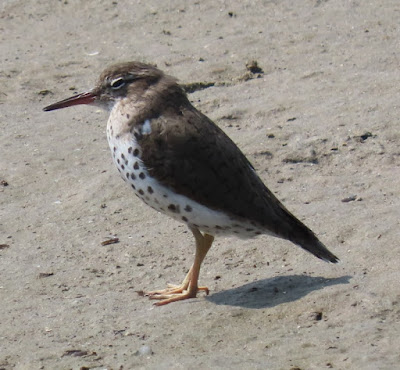 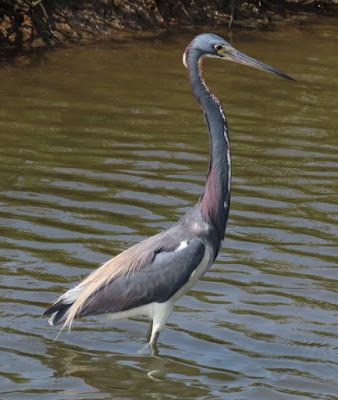 More Marbled Godwits were out on the flats, and as we approached the boardwalk that heads out over the bay, Terry swore she saw a Green Kingfisher, which of course disappeared the minute she mentioned it!  I did hear some distinctive ticking, but since Greens are so rare on the Island, I texted Javi (the resident naturalist who leads regular bird walks) to find out if any had been reported lately, and he immediately texted back and said “Yes!”  And right where we had him, too!  The presumed Northern Waterthrush pinked from the area he had been all winter, and a couple of sunlit Common Gallinules were in an inlet in the mangroves.  We were searching for a reported Prothonotary Warbler in the area, and the girls found him, deep in the vegetation! 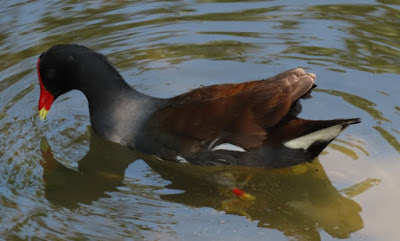 I had to leave about then, so kissed the girls goodbye and headed out by way of SR 48, picking up Chihuahuan Raven on the way home.  Personally, the list stood at 70 species, but the girls could have picked up a few more! J  Bird list: