Bill and Randee from Wisconsin got the honor of being my first guidees of the year J, who were easy-going, “enjoy the bird” sort of people, so we had a nice time at Estero enjoying many of our South Texas specialties!  But they were also willing to take a short detour to the Valley Acres Reservoir area where a Fork-tailed Flycatcher had shown up two days before, and was apparently sticking around!  I promised them that if it didn’t show right away we’d head straight to Estero, and sadly the bird didn’t show, but in the meantime we had nice views of a Loggerhead Shrike, a pair of Red-tailed Hawks, a fly-by Great Blue Heron, and a small flock of Snow Geese that I thought were pelicans at first due to the angle!  (The darker one was a clue… J)  On the way south we picked up Kestrel and Cattle Egrets for the day.


The parking lot was packed by the time we got there, so we were wondering if some event was going on!  About the same time we showed up, Colin and Pauline (Bill and Randee’s next door neighbors at the Inn) pulled in, wondering the same thing!  (They were wildlife photographer friends of Keith who flew over from England annually – or nearly so – to memorialize our wonderful fauna on “film”!)  As Bill and Randee and I headed into the Tropical Zone, one of the first things we heard was a whistling Altamira Oriole, and sure enough, a couple were coming in to Rick and May’s (and also Laura and Steve’s) feeders!  That was a nice surprise!  Laura herself came out and told us where to find the Great Horned Owls (Bill had just showed me his live “nest cam” of some owls in his back yard), so we continued on, making the first right and then the first left, where almost immediately a Buff-bellied Hummingbird came in to that big exotic cactus!  A little further down a Tropical Kingbird posed, and at the same time my charges were looking at two birds that were blocked from my view:  a knockout male Lesser Goldfinch, and a pair of Golden-fronted Woodpeckers!  A pair of Long-billed Thrashers blasted in almost within touching distance, while a Green Jay gave passable views, mostly of his yellow outer tail feathers! 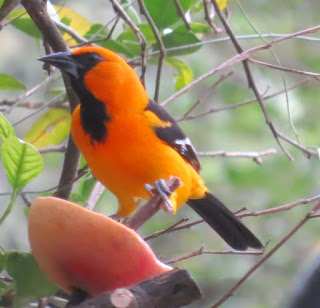 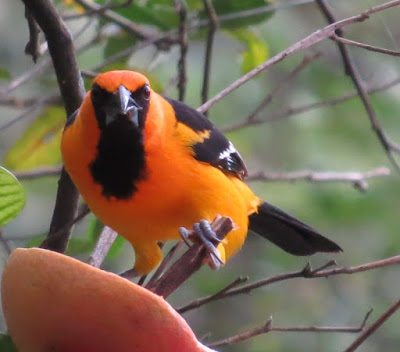 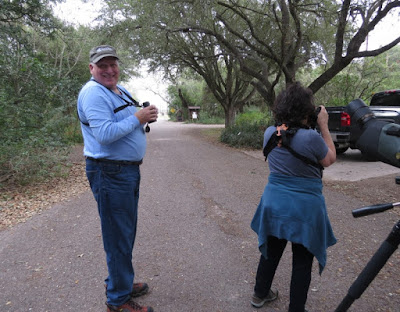 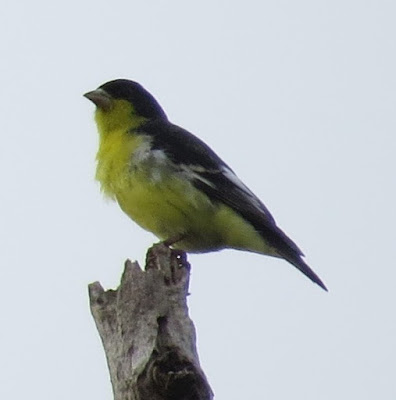 I had gotten so distracted that I totally forgot about the owls as we headed for the Indigo Blind, and I was really starting to sweat as the food was there and ready, but nothing came in literally for the 15 minutes I had set for us, and then the place started hopping!  A pair of Cardinals and female Ruby-throated Hummingbirds were the first to come in, and a Kiskadee would quickly grab a mouthful of peanut butter and then retreat to a tree.  A Curve-billed Thrasher came to the cage feeder along with Black-crested Titmice, and even an Olive Sparrow made a brief appearance!  A Ladder-backed Woodpecker called but never showed himself, and when a couple of guys came in (I guess one of them made a bad joke as that’s what Randee remembered J) we decided it was time to check the other feeders, where after awhile we added plenty of Orange-crowned Warblers and a single White-tipped Dove that strutted across the floor.  We briefly moved to the bench to get out of the sun where a Curve-billed Thrasher practically sat at our feet within a cactus with a seed in his mouth and his orange eyes googling at us, trying hard not to be seen! 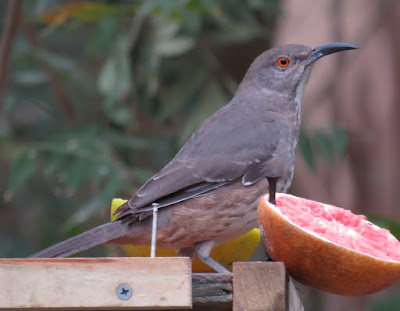 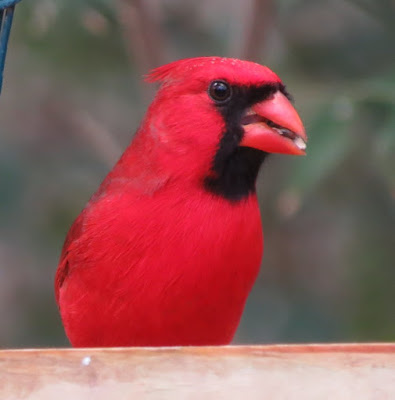 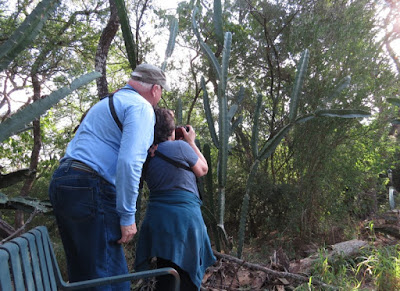 Trying to shoot a dodgy thrasher...

From there we headed to the Visitor Center by way of the “back trail”, deciding to try that “white shack” for the McCall’s Screech Owl (which I had yet to see in there), but lo and behold, this time he was home!  Bill and Randee were delighted, and Bill even delighted in showing another couple exactly where he was!  Five White Pelicans (for real J) flew overhead, and while Ibis Pond was a bit low, we managed good looks at Gadwall, Green-winged Teal, Shovelers, and Mottled Ducks, plus a flock of Least Sandpipers performing their synchronized flying!  Several Snowy Egrets were in the back, but there was no sign of the “dark” ibises.  A nice male “Myrtle” Warbler showed off just before the building, and a fat Fox Squirrel was hogging the feeder behind the offices.  Yet another Ladder-backed Woodpecker called near the walkway, but he disappeared when some other folks came by.  However, Randee called us back as she had found a little cadre of Chachalacas hiding in the undergrowth! 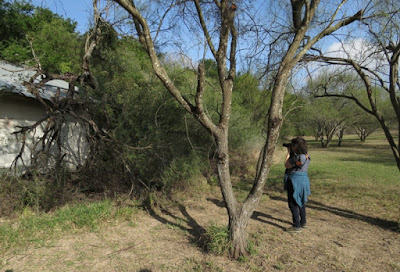 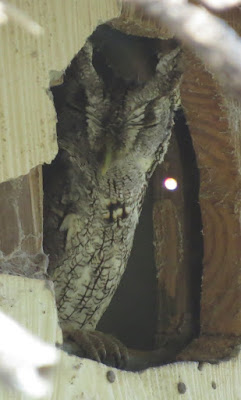 After checking in we checked out the ducks from the deck, then headed back towards Alligator Lake.  They had mentioned how much they loved Soras (and how one particularly cooperative bird had delighted the crowd at Magee Marsh one year), but sadly we didn’t even hear one this day.  At Dowitcher Pond we added some handsome Pintail and Blue-winged Teal to the duck list, along with some Coots.  Sneaking up on Grebe Marsh I heard the splat of a Green Kingfisher (and Bill thought he got a glimpse), but we could never re-find him (Bill wasn’t too worried as they had gotten that one, along with Ringed and Amazon, in Belize J).  But we did get great views of the puffy little Least Grebes as they hung around with the Cinnamon Teal that were upending in the middle of the pond! With Northern Shoveler on right 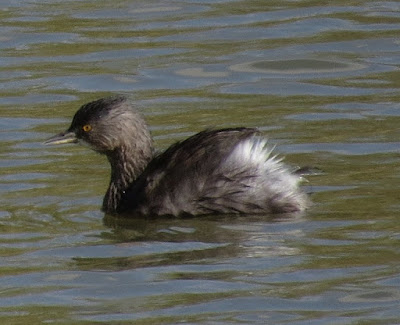 We finally made it to Alligator Lake, where we had scope views of a Neotropic Cormorant and both flavors of night herons, poring over the immatures especially!  An Anhinga perched in the distance and then did its “snakebird” thing closer to us before we headed for the Pauraque Spot, and thankfully another couple had spotted him!  Well, the wife had, anyway, as I could tell from her exasperated body language that hubby was having a hard time finding it!  When I saw where the bird was, I got my charges on him from a little better angle, and at that time the previous couple came over where hubby finally could see the thing!  Randee was having trouble as well, but I was actually able to get the scope on him, and she was blown away by his shape, like his head was “plastered on top of this flat body”!  (And that reminded me of another guidee who just couldn’t get the name down and ended up calling them “pancakes”… J)  Down the trail a piece a nice White-tailed Kite posed against the sky. 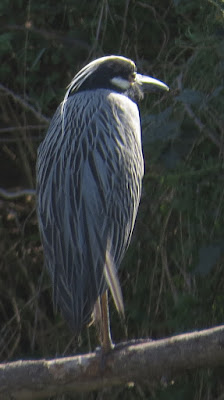 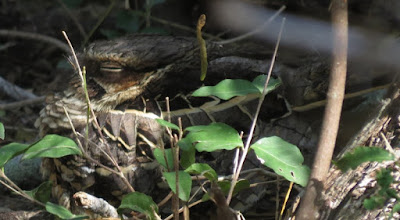 After that we continued on to the overlook to see if Big Mama Gator was out there, but instead ran into Colin and Pauline again!  They had photographed an interesting raptor that they (nor I) could identify (I wanted to see it on the computer instead of the back of a camera…).  We did have a Red-tailed Hawk glide past later, along with a Turkey Vulture, but the most excitement we had there was a cormorant trying to gag down a fish that didn’t wanna be gagged down!  After chatting a bit with C&P we kissed them goodbye (as they were flying back to England the next day) and headed back to the parking lot as it was time for us to leave as well, but we got waylaid by a young Harrier that was taking advantage of the wind and having a big time before landing on the ground! 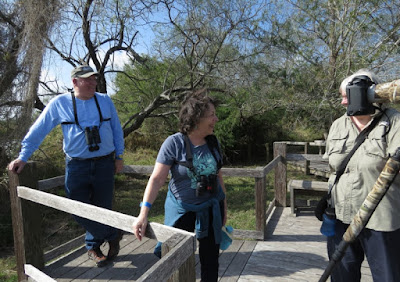 Chatting with Pauline (hiding behind her camera...)

Resisting the temptation to get an ice cream J we headed on home with a modest 63 species for the morning, enjoying the same cadre of Chachalacas on the way out!  (Oh, and the knife in the gut was Laura later reporting that the Fork-tailed Flycatcher had indeed shown up that morning… L)