First Chase of the Year

Lots of rarities had been reported over the last week in Hidalgo County, so for my free birding day I decided to try and bag as many as possible (and still go home shortly after noon…)!  First on the docket was Bannworth Park in Mission, where Barbara and I had gotten the Mandarin Duck last month, which was still being reported in addition to an Egyptian Goose!  Not “countable” by TOS standards, but eBird likes us to document exotics regardless of their presumed origin (and the Mandarin clearly belonged to someone as he had one of those round collector’s bands on his leg), so that was a good first stop as the next two stops didn’t open till eight.  Lots of “nice” people were using the park at that hour for their morning jog/walk, so I felt comfortable making my own circle around the pond; like last time, the place was covered in Black-bellied Whistling Ducks and domestic Muscovies (along with the other funny ducks and geese), and a dozen or so Black-necked Stilts huddled against the edge.  And it didn’t take long to find the Egyptian Goose, standing approximately where the Mandarin was hanging out last time!  The latter was not to be found, however (maybe his owner came over and took him home J), but with the on-and-off spits of rain I was treated to not only a lovely sunrise but a pretty rainbow as well!  I was hoping that meant that it would be a blessed day! 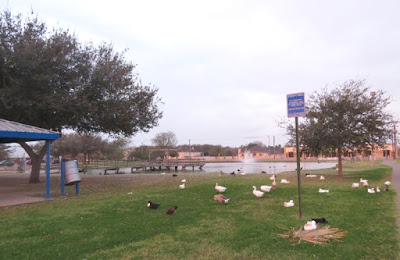 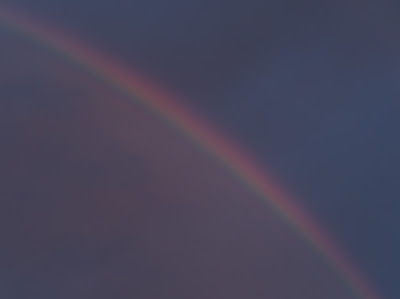 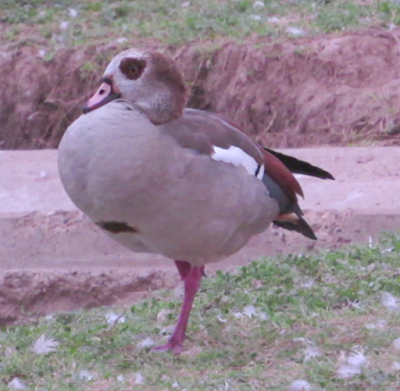 Next stop was the National Butterfly Center where the wintering Field Sparrow was still being seen.  I popped in the VC to get my band and use the facilities, then headed toward the old gardens in the car, but I had barely gotten past the gate when I heard some sparrow seeps to my right, and there was the Field Sparrow in a tree with some Chippies and Savannahs!  That was almost too easy!  I popped in the VC again on the way out to tell Luciano where the bird was in case others wanted to come chase it, and then I was off to Anzalduas! 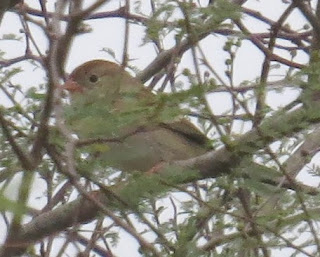 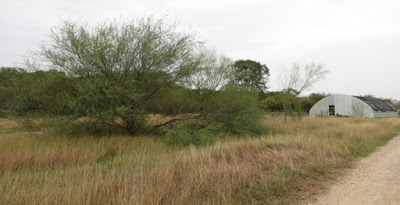 Tree where the sparrows were hanging out

A Ferruginous Hawk had been reported in the field north of the park, so I slowed down as I approached, only to see gobs of White-tailed Hawks and Caracaras all over said field!  What a sight!  It was a great study in the various ages of the hawks, and there were a couple of Redtails thrown in for good measure.  A Caracara was chasing a dark hawk I thought might have been the Harlan’s Hawk that hung around last winter (I thought I had seen some mottling on the back), but when it finally landed and I could get it in the scope, it turned out to be just another young Whitetail.  The non-raptor highlight was a single Long-billed Curlew that sailed in and called. 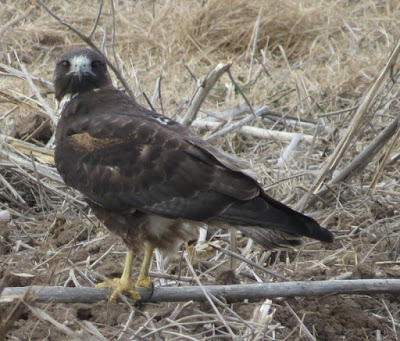 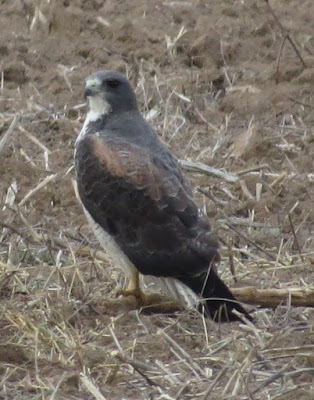 Heading across the spillway I added some Green-winged Teal, a Belted Kingfisher, and a Snowy Egret on the fly, bantered with the Constable a little J, then started crawling around the park keeping an eye out for the reported Say’s Phoebe.  Lots of Coots were in the river, and I later added Lesser Scaup, Ring-necked Ducks, and Gadwall to the river list.  Green Jays were all over, and the Merlin was still hanging around.  No phoebe yet, so once over by the dam I parked and decided to give the Rock Wren 15 minutes to show up; picked up the requisite Vermilion Flycatcher and Black Phoebe, plus both kinds of cormorants, and scared a Least Grebe away from the shore when I got to the river!  Some Mottled Ducks were behind the dam, and Rough-winged Swallows were swooping around and making their buzzy noises.  A Savannah Sparrow popped up in the rip rap, so I pished to see what else would show, and lo and behold, up came the Rock Wren!  He really put on a show, too, bobbing and preening and looking all around (I had forgotten how pretty their cinnamon rump is)! 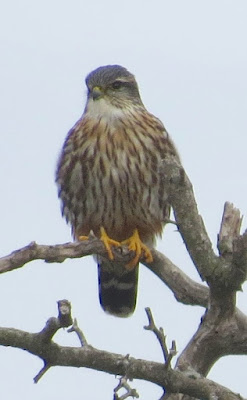 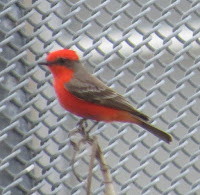 Rock Wren hangout near the dam (with Heppy) 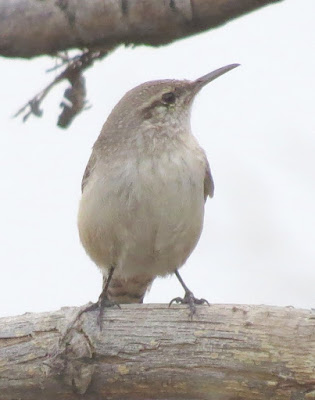 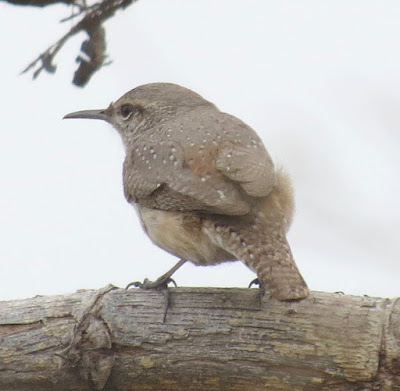 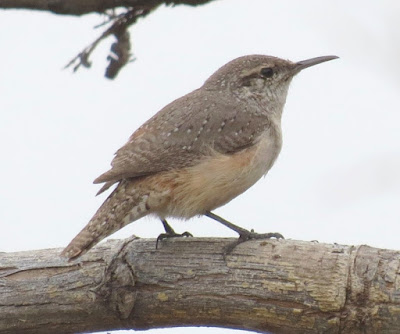 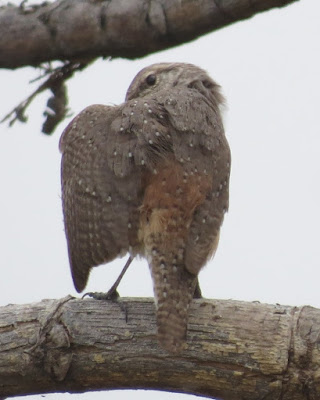 Continuing the loop, added Tropical Kingbird to the list, and at the corner bathroom a perky Yellow-throated Warbler zipped into the tree and chirped!  Couldn’t kick up any bluebirds or House Finches, so headed back out and was poking down the levee when all of a sudden, there was the Say’s Phoebe on one of the guardrail posts!  After getting a quick shot I had to scramble to pull the car over so another car could get by – turned out to be Gabriel, a young birder I had met at Quinta Mazatlan awhile back, and unfortunately hadn’t noticed the phoebe! L  (I saw from eBird that evening that he apparently bagged it later… J)  I also noticed a van on the highway surrounded by other birders, so after quickly checking the growing group of raptors in the field (mostly Black Vultures), I zipped over to see if they had seen the Ferruginous Hawk (which they hadn’t), but it turned out to be Chris Benesh and his Field Guides group! J  So that was fun getting hugs and sharing information! 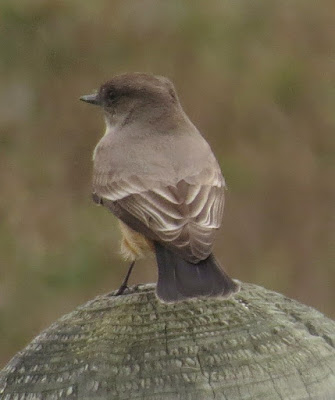 
Next stop was Santa Ana, where the aforementioned Field Guides group had seen a Hook-billed Kite from the tower earlier in the week, and the Crimson-collared Grosbeak and American Woodcock were still being seen occasionally.  I decided to watch the “back yard” feeder area from their blind (as that’s a little better for photography than the shaded windows in the VC), and in the course of 15 minutes I enjoyed lots of color made up of Green Jays, Cardinals, Altamira Orioles, Golden-fronted Woodpeckers, and Red-winged Blackbirds!  The earth tones were represented by a Clay-colored Thrush and Inca Dove, but no grosbeak came in during my watch.  After finding out exactly where the woodcock was being seen, I headed out there, adding a lisping Olive Sparrow to the list, but it was pretty quiet (and I was bemoaning the fact that I haven’t heard any tyrannulets there in the longest time)!  The woodcock had been hanging out at the culvert along the Willow Lake Trail, and if I was a woodcock, that’s certainly where I would hang out, as it looked incredibly like a woodland bog!  Couldn’t find him, but added a slew of waterbirds to the day list out on the lake, including a pretty Cinnamon Teal. 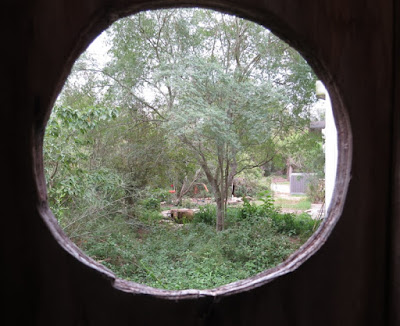 View of the "back yard" feeder area from the blind 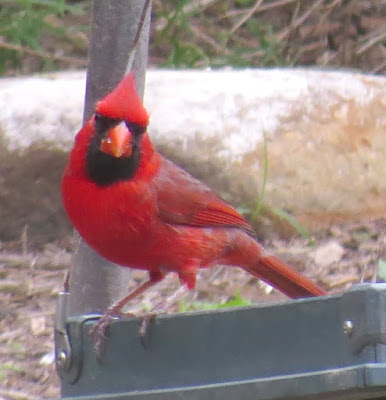 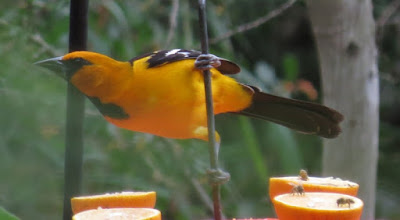 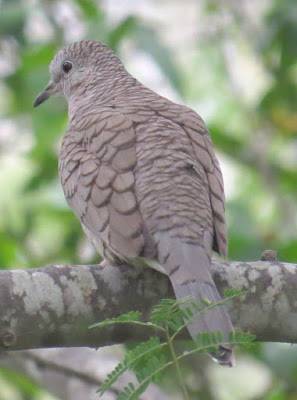 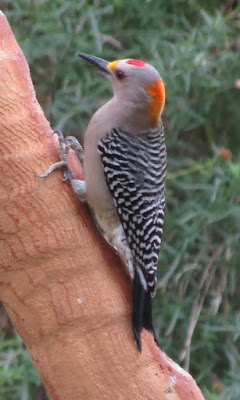 About that time I got a call from my friend Baceliza announcing that they were currently looking at the Fork-tailed Flycatcher, so I abandoned my Santa Ana search and headed straight up to Valley Acres Reservoir!  Actually, the bird had been hanging out at the bends along FM 1425, which is outside the reservoir property, but by the time I got up there the wind was picking up and there wasn’t a flycatcher to be seen L.  The huge flock of blackbirds was there, however, along with a shrike and a mockingbird, so I just pulled over and decided to give it an hour.  After a bit another car pulled up, and I thought it was John Yochum at first until he opened his mouth and started talking with a British accent! J  He turned out to be a birder from Houston named Howard, so as he waited at the actual curve, I made a few more scans and then thought about just cruising up to the reservoir entrance and back.  I started walking over to him to get his phone number in case I saw the bird (he was up on the “hump” looking the other direction for anis), when suddenly there was the flycatcher on the wire!!  Hadn’t even seen him come in!  So we both laughed about that and enjoyed him; I was initially disappointed at the prospect of a big dip when this was my second try for the bird, but after Howard pulled up I got the sense that just maybe God was waiting for him to arrive so he could enjoy the bird, too! J 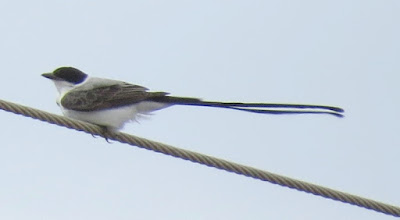 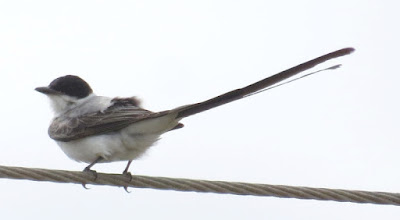 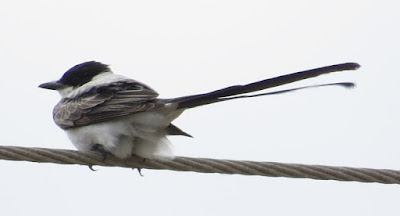 Huddled against the wind...