This was Warren and Sue’s first trip to Texas (coming from my home state of Michigan J), so all of the Valley specialties would be new, but he had a special love for kingfishers and the White-tailed Hawk!  So since we only had a half day, I figured that Edinburg Scenic Wetlands and relatively close-by Laguna Seca Road would be a good pair!  Katinka came with us, and her young eyes proved invaluable!


We actually arrived at the Wetlands a little before dawn, but amazingly the gate to the gardens was open, so we pulled into the parking lot, logging a flock of Black-bellied Whistling Ducks right away!  Heading in to the dusky butterfly gardens, almost immediately a crack overhead alerted us to a flyover Ringed Kingfisher!  The “chepping” Wilson’s Warbler was almost anticlimactic (he wouldn’t show, anyway L), and a cooperative flock of Orange-crowned Warblers moved through the trees.  A Chachalaca that hopped up on an empty tray feeder was a hit, and a Long-billed Thrasher did his duit call, thankfully popping up so that Sue and Warren could get a look!  Green Jays were bouncing through the trees as well, making funny noises as they went, but wouldn’t let us get much of a look…  Olive Sparrows lisped unseen, and an Indigo Bunting pinked from deep in the stuff. 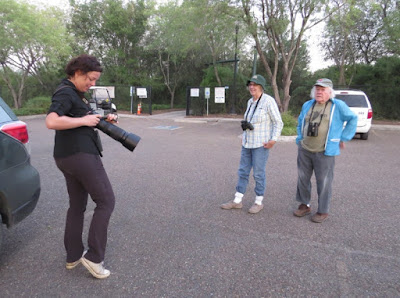 Katinka readies her new camera while Sue and Warren watch!

We slowly wandered the trails hoping to flush a Pauraque (no such luck), but the early morning light was beautiful, especially along the “Jungle Trail”!  We and eventually made our way to the north pond where all the action was:  a Curve-billed Thrasher gave his rude whistle, and thankfully Warren and Sue were able to spot it!  A Neotropic Cormorant feeding frenzy was in progress (with a couple of Double-crested for good comparison), while we logged Anhinga, several egrets and herons (a young Black-crowned Nightie was a good ID challenge), and a young Common Gallinule.  A pretty Tricolored Heron was a hit, and a single Pied-billed Grebe was down by the spillway.  A Spotted Sandpiper kept acting like he wanted to land at out feet before veering off, and three Belted Kingfishers had a little dogfight. 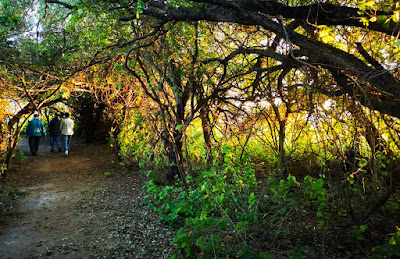 Early morning on the Jungle Trail (above and below ©2019 Katinka Domen, Beaks & Peaks) 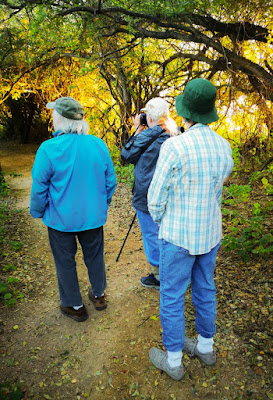 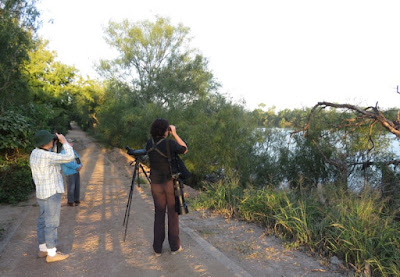 Checking out the North Pond

Eventually a little Green Kingfisher did fly out over the water and back to shore, but unfortunately Warren missed him, so we headed down towards the canal to see if we could kick him up.  We did manage to spook an adult night heron, but nothing else, so we were headed towards the overlook when Katinka (who was actually retrieving my scope for me J) announced she had the Green Kingfisher!  It was a female, and we all got great looks through the scope!  Heading back, one of the many obstinate Buff-bellied Hummingbirds finally deigned to give us a look; Warren was surprised at how large and dark they were!  We did catch sight of a female Ruby-throated on the way out for comparison.  We heard both Couch’s Kingbird and Kiskadee, but never got on either… 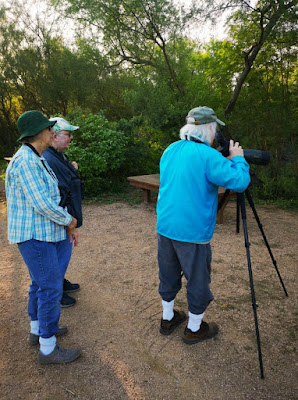 Happy with a very productive start to the morning (a kingfisher trifecta is always nice J), we headed up to Laguna Seca Road, going in by way of Miller Road so that the sun would be at a better angle.  The dominant birds along this stretch were dozens of Scissor-tailed Flycatchers, and while we were stopped to check out a line of tamarisk trees, Katinka and Sue counted at least 30 Scissortails sitting out in the field!  Other wire birds included Lark Sparrows and Kestrels, plus several Loggerhead Shrikes and one meadowlark next to the field.  Pyrrhuloxias were out the yin yang, and Sue was joking about the fact that the bird always seem to fly just when she found the bush it was in! L  A covey of Bobwhite gathered at the side of the road ahead of us, and one by one flew across while their “leader” gave his covey call!  Somewhere during a stop a Broad-winged Hawk was circling with a Turkey Vulture, and we had a Cooper’s bat by at one point.  Several Harriers put in an appearance as well.  On one leg we found ourselves playing Chicken with a huge “Overloaded Truck” (thankfully the lead vehicle made room for us to turn around and take shelter in the driveway we just passed), and there were tons of trucks coming and going further down; it made for quite the dusty road! 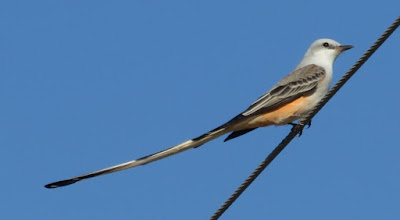 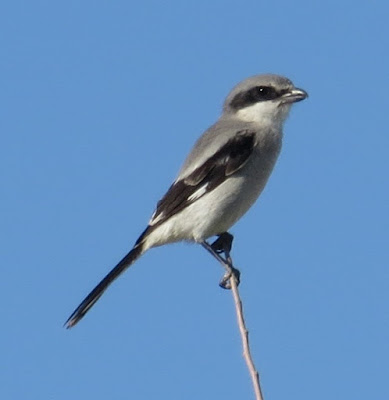 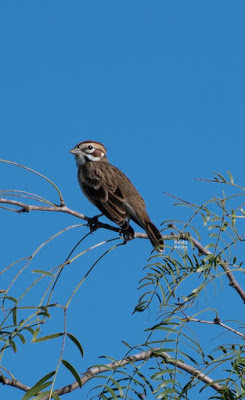 Our main target here was the White-tailed Hawk, but there were plenty of other goodies; Warren and Sue had visited Southeast Arizona several times (Sue had a sister out there), therefore many of the “back road specialties” were almost yawns to them (except for the Pyrrs J)!  But they had missed Cassin’s Sparrow, so when suspicious titters emanated from the brushy fenceline, we’d try to pull them out, and after several obscured views we finally got one to sit out in the open!  Caracaras were the primary raptor, and several obligingly sat on the power poles as they’re wont to do, and even a pair of Harris’ Hawks did the same, but no Whitetails… L  A Brown-headed Cowbird was keeping a pair of Turkey Vultures company, which led to a discussion about the Kirtland’s Warbler, which is recovering from cowbird predation quite nicely!  A highlight was a Greater Roadrunner perched on a post; it was a life bird for Katinka, as she said they only have the Lesser Roadrunner in her garden!  (I wanna go… J)  She also spotted a kettle, but by the time I could get on it the only thing I could pick out were a couple of Black Vultures.  A pair of Ladder-backed Woodpeckers showed nicely next to the car, and finally a Golden-fronted latched onto a pole on Warren’s side so he could get a look!  The non-avian highlight along the route was a sunning (and stunning) Giant Swallowtail! 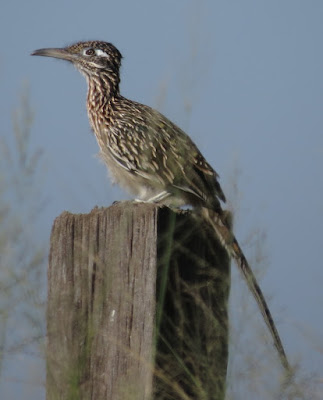 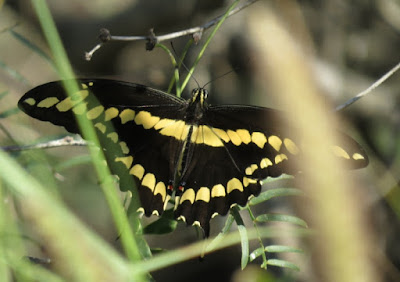 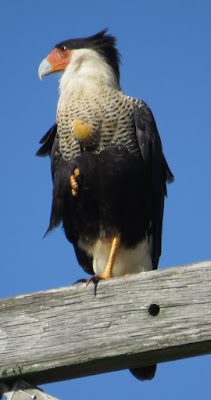 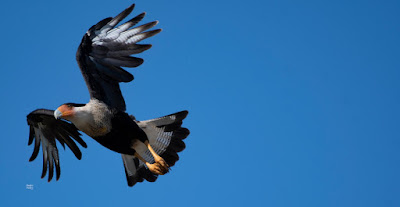 We eventually made our way to the south end, where the semi-reliable “Fuertes’” Red-tailed Hawk showed way overhead, but still no Whitetail… L  We had to head home about that time, so we blasted east on FM 490, already planning a trip to La Sal del Rey for Monday, when I heard this soft little voice from the back seat say, “Stop! Stop!”  (I told Katinka that she was gonna hafta learn to yell… J)  I pulled a Uie and crept back to where she had spotted a big, beautiful White-tailed Hawk sitting on a distant wire!  It was too dangerous to get the scope out, but everyone got cracking looks at this beauty!  Katika saved the day again! J 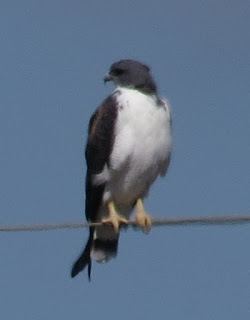 We wrapped up the outing with a respectable 66 species for the morning!  Bird list: