Just in Time for the Front!

Amanda and Brandon had never been to the Valley before, so since Amanda had a window of opportunity to slip away from her kindergarten class, they decided to rush down for a long weekend!  Since we only had a half day, the standard destination for a good variety of birds is Estero Llano Grande State Park, and with the first big cold front of the season having come in overnight, I personally was hoping that maybe it brought some good stuff with it!


Thankfully we didn’t have any rain, but the wind and gloom made it a little tough at first:  Couch’s Kingbirds were the first things to actually show themselves (besides a kettle of migrating Turkey Vultures), and White-winged Doves clattered noisily from the trees as we passed by.  The “bitty birds” tended to stay hidden and move fast when they did show:  titmice and gnatcatchers were the main players, but we also had brief looks at Nashville Warblers and a single Black-and-white.  Green Jays and Golden-fronted Woodpeckers finally gave passable views, and a Catbird sat up against the sky, stumping me until it said something (that was Amanda’s guess right away).  A raptor flew by early on that struck me as a Harrier, and continuing on what looked like a Harris’ Hawk flushed, and sure enough, we caught the perp sitting right out in the open for us!  Even though they weren’t stocking the feeders, we decided to sit in the blind for a while, where a couple of Green Jays actually did come in for a peek and gave Brandon some nice photo ops!  The trail behind Ben Basham’s house was overgrown, so we backtracked and took the trail out to the wetlands, pausing to look for the “McCall’s” Screech Owl at the white building (a no-show L). 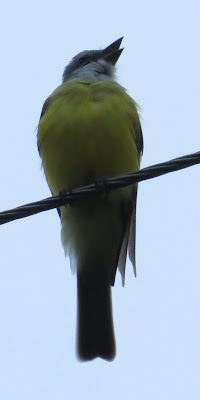 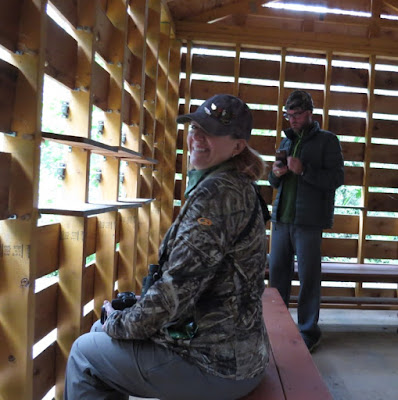 Amanda and Brandon in the blind 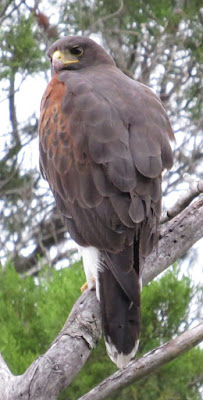 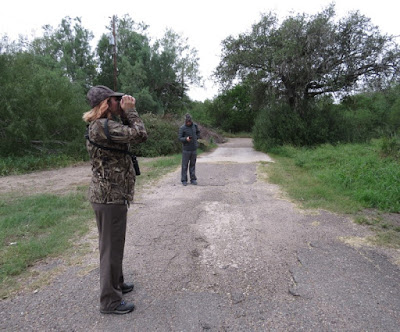 Enjoying a Golden-fronted Woodpecker (below) 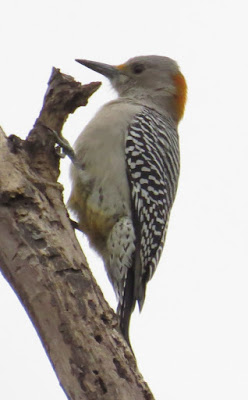 The wetlands were very productive, however, with several White-faced Ibis and one lone immature White Ibis, several Snowy Egrets and Least Sandpipers, and a couple of Mottled Ducks and Lesser Yellowlegs.  Taking the trail up behind the visitor’s center we had a Buff-bellied Hummingbird at our feet, feeding on the Turk’s Caps, while a Kiskadee flew in and tried to divert our attention!  An Inca Dove was on the tray feeder, and Amanda spotted a Chachalaca deep in the trees!  We needn’t have worried, however, because we shortly saw several on the railing!  Come to find out the Big Sit was going on, and they had spread seed all over the railings and the ground to attract birds that they could log from the circle on the deck!  We apologized for breaking up the party J and said “hi” to the gang (those I knew included Huck, Ranger Javier, and Mary G.), got checked in, then enjoyed more birds from the deck, as the overcast skies made viewing tolerable!  Tons of Blue-winged Teal were around, and a Cooper’s Hawk made a pass through once in a while.  The ibis had moved into their namesake pond, and some subadult Common Gallinules threw Brandon for a loop as they didn’t have their bright red bills yet!  Huck got us on a quartet of Wood Storks sailing over the horizon; unfortunately Amanda missed them, but Brandon did get to see and photograph them, which she said was better as that was a life bird for him (but not her)! 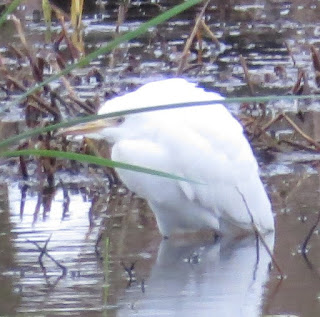 Cattle Egret discovered after the fact... 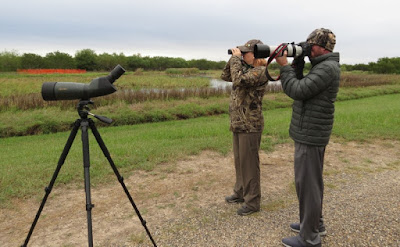 Amanda and Brandon on the back trail 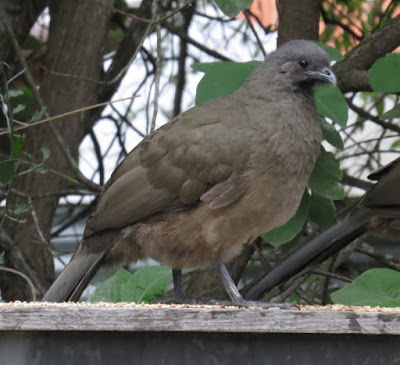 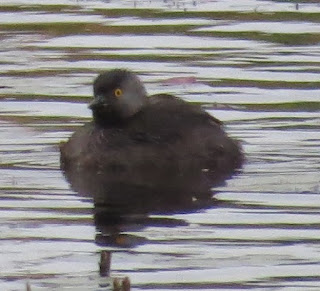 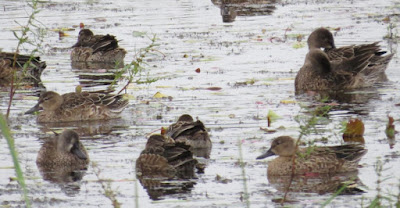 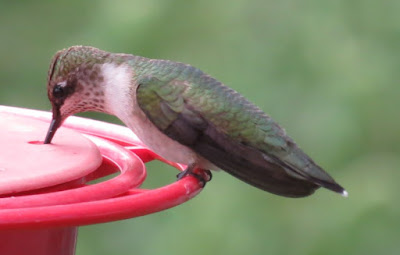 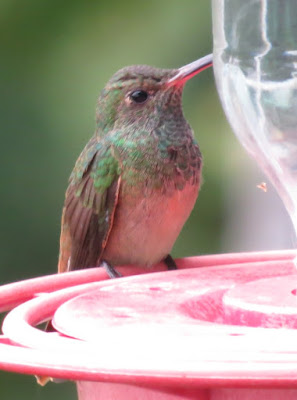 Huck had told us that the Screech Owl out by Alligator Lake was in his box, and also where a “backup” Pauraque was in the Tropical Zone in case the standard one didn’t show J, so after stealing a muffin and a couple of ginger snaps that someone had donated to the Big Sitters J we headed out.  Lots of stuff was in Dowitcher Pond, including tons of Black-bellied Whistling Ducks, several Least Grebes with a couple of token Pied-bills, and one lonely Coot.  Grebe Marsh was birdless, so we headed on to Alligator Lake where we initially couldn’t find any night herons, but after I told Amanda what to look for on the Pauraque, she actually spotted it!  (Brandon tried to take a selfie with it, but I’m not sure it worked… J)  Unfortunately the owl was another no-show, but I encouraged them to look for the one at Quinta Mazatlan, where they were planning on going later in the day.  From the deck overlooking the lake itself we had a nice male Anhinga (they had never seen one so pretty) and finally an adult Yellow-crowned Night Heron!  Brandon had actually spotted a couple more that were hidden in the brush along the trail, but the Green Kingfisher was a no-show…  (That was another one I told them to look for at Salineño when they went…) 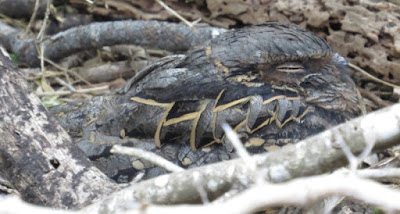 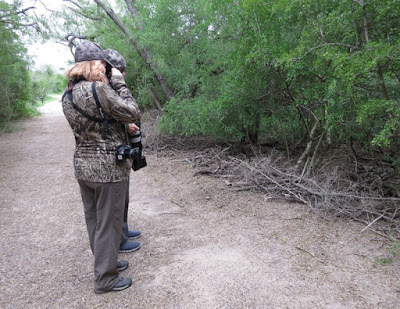 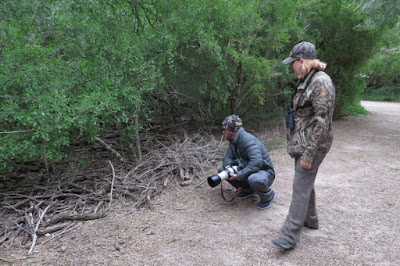 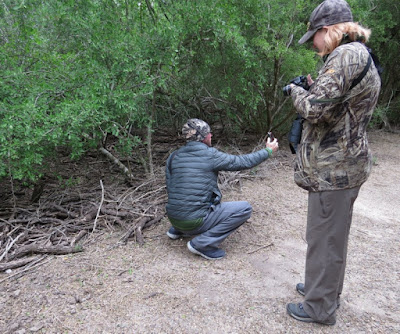 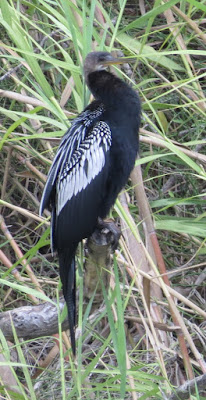 We trudged up to the levee, and that place was hopping:  lots more teal, of course, but also a handful of Shovelers (one male in their crescent-faced eclipse plumage), and several Avocets were a hit!  Long-billed Dowitchers were huddled in little pods, and both Tricolored and Little Blue Herons made a showing amongst the Snowy Egrets.  A couple of Roseate Spoonbills flew by, and down by the trail back to the main part of the park were tons of White Pelicans!  Mary had mentioned that a Blue Grosbeak was calling along the trail behind the Visitor’s Center about the time we came trudging up (but didn’t hear, naturally), so I was glad to hear another one pinking from the waterside vegetation!  The wind finally drove us down the hill… 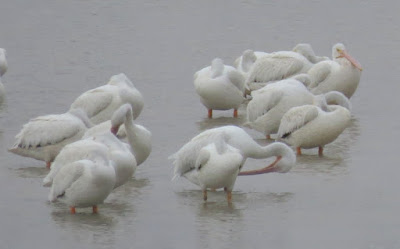 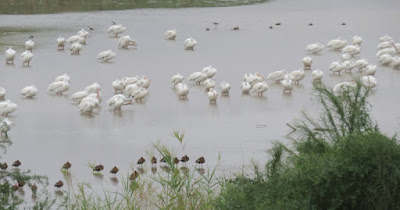 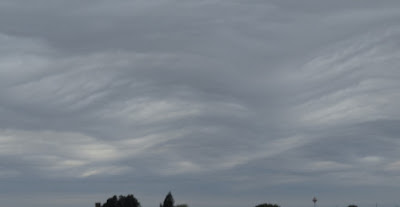 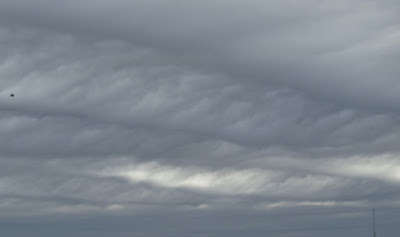 A look at Dowitcher Pond from the south end added an immature Little Blue Heron and lots more whistling ducks (we looked hard for Sora, but no banana).  The ibis had migrated over to this pond as well (Mary gave us a great pointer:  don’t worry about trying to pick out a Glossy until November, when the virtually identical immatures have matured)!  Curlew Pond had nothing except a blanket of pretty yellow flowers, so we dragged ourselves onward through the grassland, picking up an Eastern Phoebe somewhere in there.  From the boardwalk we had nice looks at crisp juvenile Least Sandpipers, and at the benches by the restrooms we enjoyed a nice, fresh immature Ruby-throated Hummingbird.  Unfortunately while Amanda was “taking care of things,” a non-breeding male Indigo Bunting showed up, as well as a singing Lesser Goldfinch!  She did report seeing the Curve-billed Thrasher that we only heard, however, and I also heard a Hooded Oriole wheep. 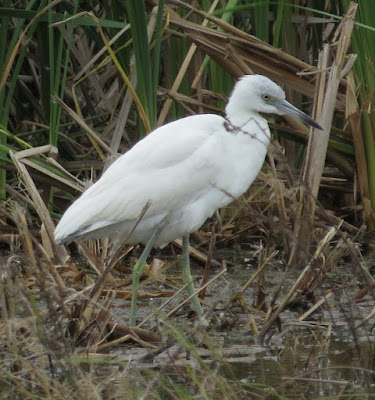 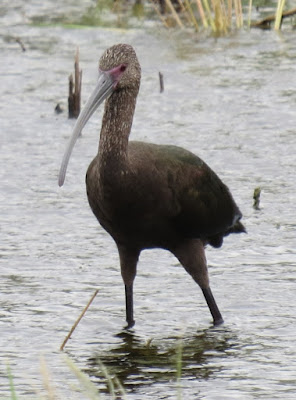 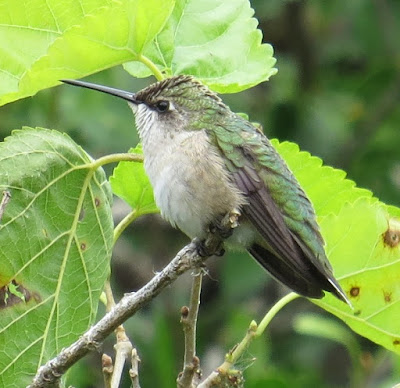 
They were ready to hit the El Dorado after that, so we wrapped up and headed home, with a total of 65 species for the morning.  Bird list: