When Easy Is Hard (and Vice Versa)

Barbara was to head back home today, so we opted to go to Santa Ana NWR, as it was close, and her main target (the Beardless Tyrannulet) was reasonably easy to get.  Katinka joined us again, and before long we were hitting the trail, covering the Chachalaca Trail, then hugging the full Willow Lake (whichever one that is) on the Tower Trail, going past said towers, then picking up the Willow Lake Trail past the big overlook, then back to Chachalaca.  The air was full of birdsong:  Altamira Orioles and Green Jays were dominant, and large flocks of White-winged Doves and Red-winged Blackbirds flew over.  On the way to the restroom I discovered an Io Moth that was reticent to show his “eyes” for Barbara’s camera! 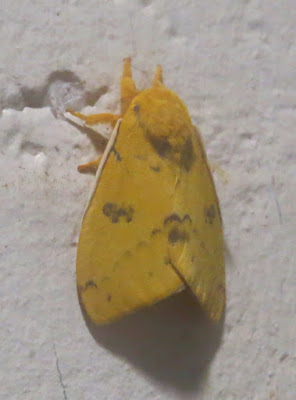 Heading down to the “roundabout” we heard several Olive Sparrows lisping and Carolina Wrens fussing, and before long Katinka spotted her life Long-billed Thrasher!  We stopped for every little guy, as Barbara was still looking for Alder Flycatcher and odd warblers, but the vast majority were Yellow Warblers or Blue-gray Gnatcatchers.  Both Tropical and Couch’s Kingbirds were all over, as well as four kinds of swallows swooping overhead in addition to the Chimney Swifts!  Something that I didn't recognize was going "tuck tuck", and we never could get it to come out, but the next morning on an exercise walk the perp came out for me, and it turned out to be a Yellow-breasted Chat!  We got to the first Willow Lake overlook where the girls spotted a raptor in a tree that I never could get on, but was probably a Harris’ Hawk from their description.  A pair of Mottled Ducks flying over were our only ducks, and Baltimore Orioles were going through in good numbers, but we also had some Hooded Orioles wheeping, with one female showing.  A Northern Waterthrush pinked near the big blind, and the Olive Sparrows finally showed for Katinka (another lifer), along with Black-crested Titmouse and Verdin.  A group of anis bounced through, and a Myiarchus flycatcher with a paler throat was labeled as a Brown-crested.  But I was very disappointed, as every exercise walk I’ve taken around the Chachalaca Trail (on a near daily basis) has produced the tyrannulet, and we didn’t hear one WheeK!  L 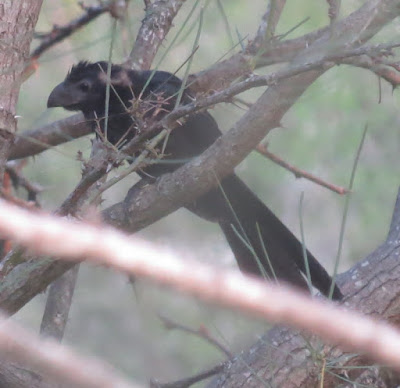 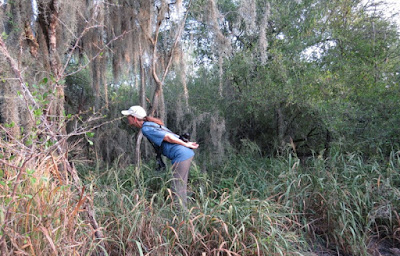 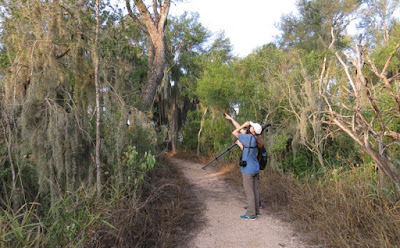 Katinka and Barbara pinning down a warbler 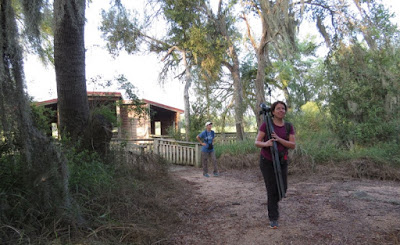 Barbara (left) and Katinka by the Big Blind


Continuing on the Tower Trail, we found Killdeer on the little sandbar, but Barbara spotted the Green Kingfisher shooting across!  A little further down an empid came and sat, and we had a discussion as to whether it was a Least or an Alder, as the former was my first impression (especially after Katinka’s pictures showed a dark tip to the lower mandible).  However, while we were watching that bird, I was hearing a pit coming from elsewhere that exactly matched the call note of the Alder, so she could at least bag that target (which, frankly, was the harder one to get)!  Someone spotted a raptor fly into a tree, and a look through the scope revealed a young Red-shouldered Hawk!  (They were hoping for a Roadside… J)  As we left the lake, a Ringed Kingfisher decided to sound off!

The "far" Willow Lake along the Tower Trail 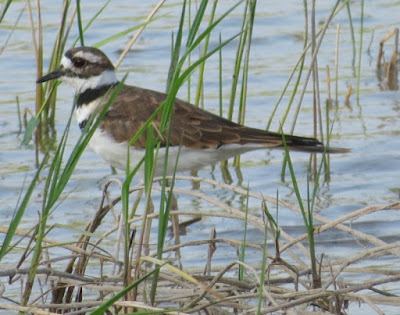 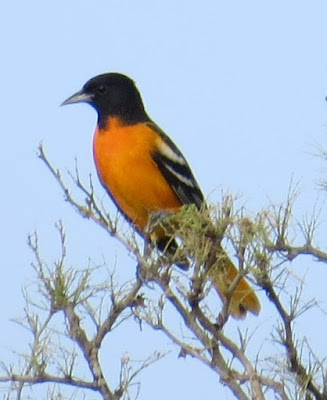 We continued on past the towers, logging a Yellow-billed Cuckoo pair, and a nice look at a pewee.  Katinka saw a Nashville Warbler somewhere in there, and the bird of the day for me was a Chuck-will’s-widow that we flushed near the towers!  Approaching the overlook along the Willow Lakes Trail a Chachalaca let loose with an alarm call, and a Common Ground Dove sat on the railing (but not long enough for a picture… L).  As we rested there, what should come screaming in but the Ringed Kingfisher with a Couch’s Kingbird hot on her tail!  She made a couple of splashes and seemed to ignore the kingbird pair (we thought there was just one but the photos revealed two) until she finally found a perch out of sight. 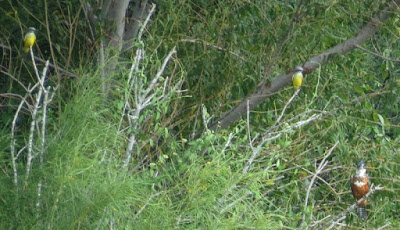 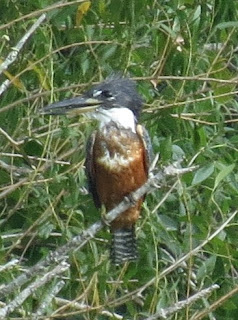 Close-up of the kingfisher 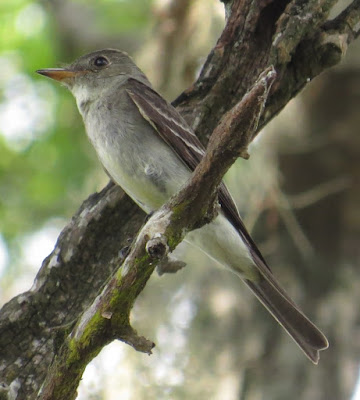 
Things were quieting down as we circled around, and I suggested we pass through the Spanish Moss-laden section of the Chachalaca Trail again, but no tyrannulet was to be had… L  However, during the second pass by Willow Lake, what I assumed was a Diamondback Water Snake came “slithering” across the lake (Katinka and I were transfixed but Barbara se fued the joint J)!  After posting the video on Facebook, several snake experts suggested that it was actually a young Indigo Snake, as the way it was swimming wasn't consistent with a water snake!


We crawled down the road and back to the Visitor’s Center, and while I got us signed in and took a peek at the back feeders (where a White-tipped Dove was poking around), we still had a little time left, and after some hemming and hawing Barbara asked if we could take one more swing around Chachalaca Trail, which was fine, so off we went!  I’d love to say that this time we hit pay dirt but sadly, the tyrannulet never called, but we did pick up a Great Crested Flycatcher on the return leg!  Barbara’s consolation was that she would hopefully pick it up at the King Ranch in a couple of weeks! 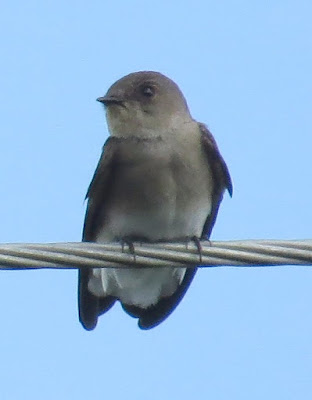 
We finally called it a day after that, with 52 species for the morning.  Bird list: