Seeing Out the Summer with a Bang


Joakim from Sweden had come to the States on business, so being an avid birder and photographer he would always take some time to go someplace new, so this time he chose South Texas!  Many of our specialties would have been new for him, but he was especially keen on kingfishers, so since my friend Dan Jones had seen them recently from his back yard in Progresso Lakes, we decided to spend the early morning there!


It was an absolutely gorgeous day: clear, calm, and with glorious cumulus clouds reflecting the sunrise over on the coast!  We started off with a bang when Joakim’s life Clay-colored Thrush landed in Dan’s front yard even before we got out of the car!  We quickly set up shop in the back yard, which overlooks Moon Lake, and started scanning (although Joakim was immediately distracted by the hummingbirds – both Buff-bellied and Ruby-throated – feeding in the bottlebrush):  Barn and Cave Swallows lined the wires across the way, and a Black Phoebe sang and flopped around.  Shrikes and Mockingbirds gave comparative views, and twice a Yellow-billed Cuckoo flew across the resaca and landed overhead, but never giving a better view…  Green and Black-crowned Night Herons showed, and the Black-bellied Whistling Ducks only flew overhead instead of carpeting the lawns across the way like they usually did!  At one point a raptor flew by that turned out to be a strongly-marked juvenile Mississippi Kite, while the fly-by Caspian Terns weren’t nearly as exciting!  Both Hooded and Altamira Orioles called but remained hidden (we saw a couple of possible Orchard Orioles zip by), and we were entertained by a family of Groove-billed Anis that flew right past us!  An Eastern Kingbird perched on the wire across the way, and at long last I heard a Green Kingfisher splat; thankfully Joakim spotted him as he darted down the resaca!  A feral Muscovy was good for the eBird list, and a calling Mourning Warbler that refused to come out of hiding in Dan’s butterfly garden was good for my year list! 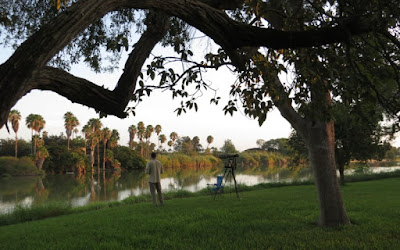 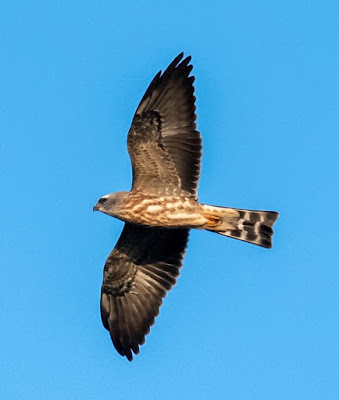 After an hour we were ready to move on, and since Ringed Kingfishers had been reported at Estero Llano Grande State Park, we headed up there next.  Lo and behold, as we crossed the actual estero on FM 1015 Joakim spotted one on the wire, so I made a Uie and pulled over at the spot, although it was a horrible look against the sun (but he was still amazed at how big it was).  I decided to pull in the farm road next to the estero to see if we could see it from a better angle (which we couldn’t), but the estero itself was stuffed with stuff in perfect light:  lots of Black-bellied Whistling and Mottled Ducks (and even a couple of female-type Blue-winged Teal), Roseate Spoonbills, Tricolored and Little Blue Herons, and lots of Long-billed Dowitchers and Stilt Sandpipers!  There was a handful of Least Sandpipers as well, plus a bigger peep that “felt” like a Western to me, and after scrutinizing my pictures later I felt comfortable calling it that, with the longer, more droopy bill that was hard to see while the thing was poking around so actively.  We also had both yellowlegs, a pair of Caracaras, and what was almost assuredly a Harris’ Hawk making off with a prey item (all Joakim saw was a “black” hawk with a white tail base shoot behind the hedge).  A Bank Swallow was a nice addition as well. 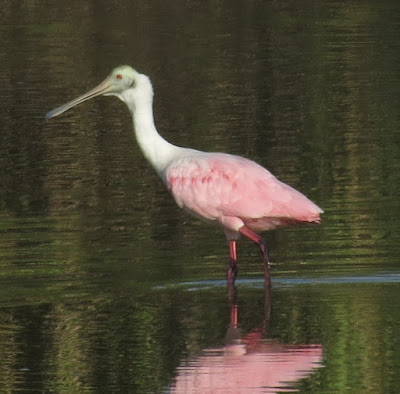 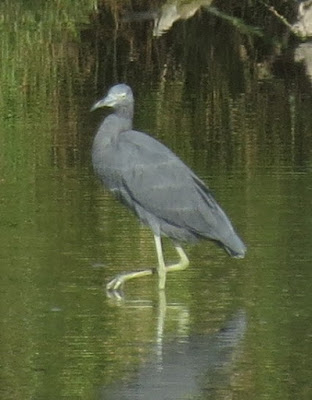 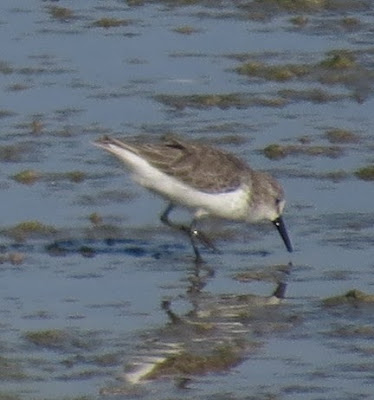 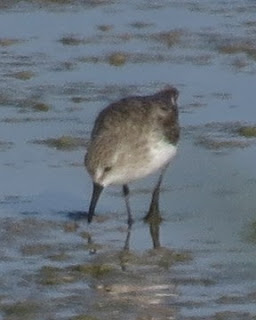 The kingfisher was gone by the time we returned to the bridge, but Joakim was game to try for the Pauraque and Screech Owl, so we wheeled into the parking lot, and once headed towards the visitor’s center I was shocked to see water in Ibis Pond, as I had called earlier in the week and was told that everything was dry (except for Alligator Lake, which always has water)!  That was a very pleasant surprise, as the migrating shorebirds would certainly like that!  Despite the water about the only thing using it was a pair of whistling ducks, so we headed straight to Alligator Lake, pausing briefly at Dowitcher Pond long enough to log a Spotted Sandpiper.


Even Grebe Marsh had water, so we lingered to photograph some Yellow-crowned Night Herons and Least Grebes (plus this black-and-yellow barred thing gliding through the water that I finally figured was a Red-eared Slider…), and a pair of whistling ducks with a brood of adorable babies!  We then turned the corner to try for the Pauraques and ran into a couple of guys who knew exactly where they were, and they kindly took us right to the spot at the foot of the ramp to the deck where two of them were hanging close to the trail (I told Joakim that these were the “backup” birds in case the ones in the usual spot weren’t visible… J)  Needless to say Joakim got some marvelous pictures and was very pleased!  So since there was nothing on deck (except a flyover Avocet) we headed back, but not before checking the screech owl box, and miracle of miracles, there he was in the hole!  (Even though he had seen Eastern Screech Owl before, I advised him to put this one, the “McCall’s” Screech Owl, in the “bank” as they may split it down the road…) 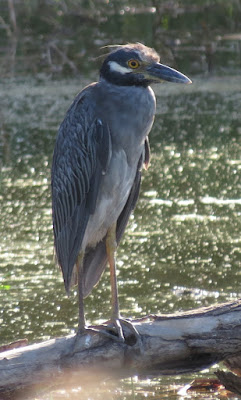 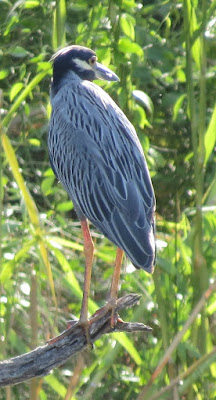 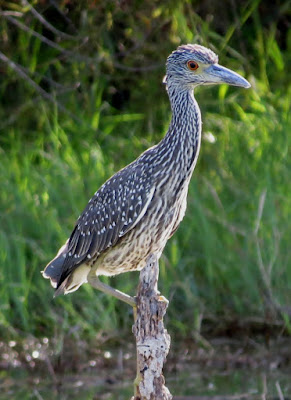 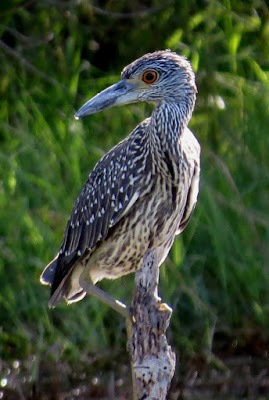 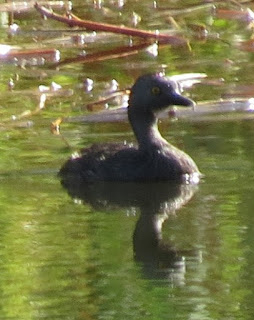 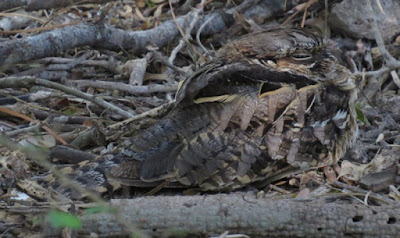 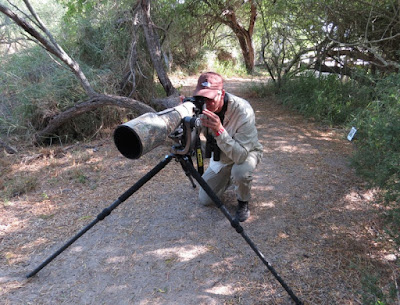 Joachim gets his shot! 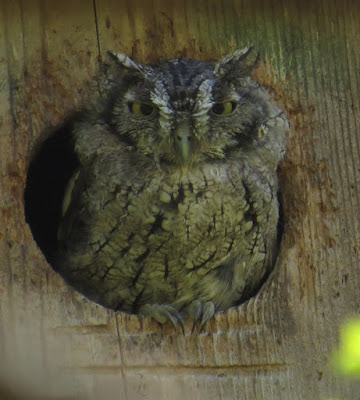 
Heading back we added a juvie Brown-crested Flycatcher to the list, and took the long way around Dowitcher Pond as we did see some stuff way down there…  There were tons of whistling ducks of all ages (no Fulvous, alas), plus some close-by Least Sandpipers and a couple of Lesser Yellowlegs, but another couple we ran into spotted a Sora down along the edge!  He actually came out in the open at one point; my pictures were halfway decent, so Joakim’s were probably stunning!  We continued to the boardwalk on the Spoonbill Trail and spooked both a Yellow Warbler and Northern Waterthrush, and paused to photograph a feisty Kiskadee and a couple of Lesser Yellowlegs (the Black-necked Stilts were a little too far away).  On the deck we ran into Ranger John and his bird walk (including the two guys who showed us the Pauraques) and enjoyed a Chachalaca at the feeder! 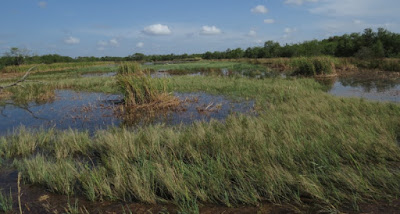 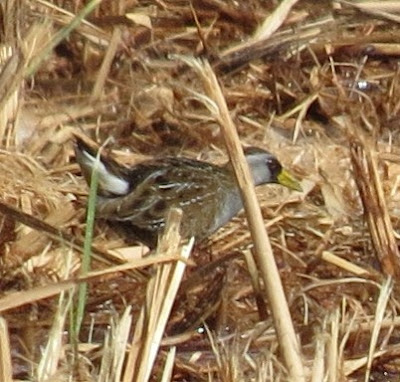 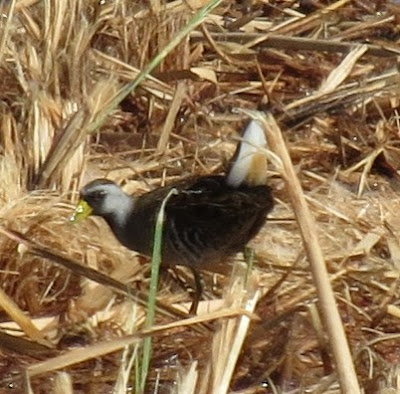 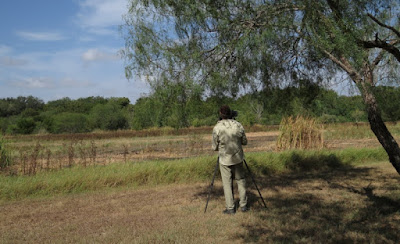 Joakim shooting a cooperative Kiskadee (below) 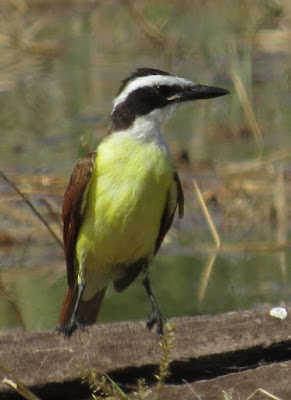 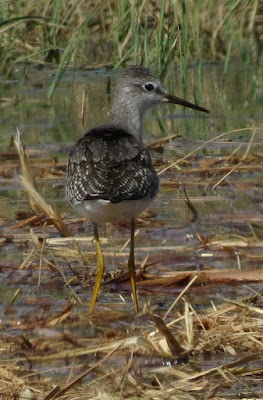 It was definitely getting warm by that time, so since we still had a little time before we had to head back, and Joakim had never seen a Bronzed Cowbird, we decided to swing by the silos to see if we could kick one up (which we did, but it was a juvie).  But I guess I had never been there this time of year before, as the place was devoid of blackbirds for once!  But we got the cowbird, so it wasn’t a total loss…


We headed back for siesta after that, and upon further discussion decided to adjust the itinerary a bit in order to try and hit the parakeet/parrot shows after La Sal!  But while showering I got to thinking that maybe Wallace and Laguna Seca Roads would be better than La Sal, being closer to Trenton with similar habitat, plus you had the wetlands along Wallace.  So that’s exactly what we did:  the initial fields along Wallace were pretty barren (didn’t even get a Horned Lark out of it), and even after driving up there Heppy’s thermometer said it was still 100 degrees out L!  Even so we managed to log a bunch of Lesser Goldfinches and some more anis, plus one set of bushes had three goodies that just didn’t wanna come out (the wind was starting up by then as well): a Pyrrhuloxia, a peeping Yellow-bellied Flycatcher, and a “whitting” Willow Flycatcher!  A Verdin popped up for Joakim, which was another nice lifer, along with a buzzing Blue-gray Gnatcatcher.  We had several more swallows, and in addition to the Barnies we were able to add Rough-winged to the list.  A bird I thought was a shrike at first and Joakim thought was a Mockingbird turned out to be a Lark Sparrow!


The real party was at the wetlands, where we found about 70 Wood Storks, a Roseate Spoonbill, some really nice-looking Neotropic Cormorants, and more Great Egrets than you could shake a stick at!  A pair of Common Gallinules was nice, but that was the extent of the waterbird show.  A pair of Caracaras posed for pictures, and just before the end of the road a White-tipped Dove blasted across (Common Grounds were all over), and a pair of Blue Grosbeaks popped up by the side!  We managed enough of Laguna Seca Road to get the “Fuertes’” Red-tailed Hawk and a couple of Scissor-tailed Flycatchers, plus a calling Bobwhite out the window and a nice Harris’ Hawk on the way to the freeway.  While Joakim was shooting the hawk I heard an Upland Sandpiper calling in the distance, but of course there was no chance of seeing him… 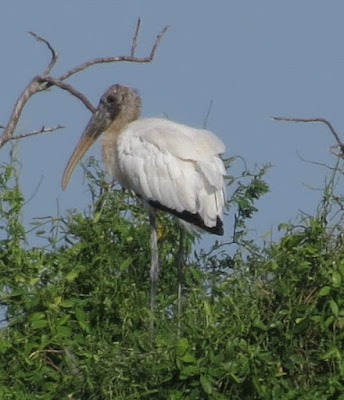 Wood Stork (in flight below) 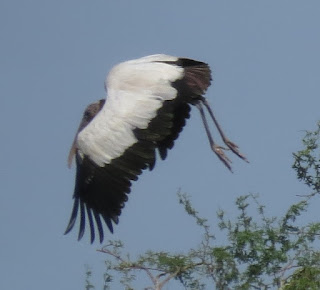 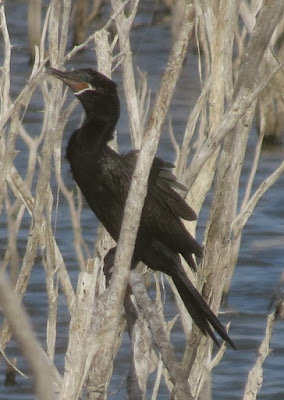 Part of the Egret Party 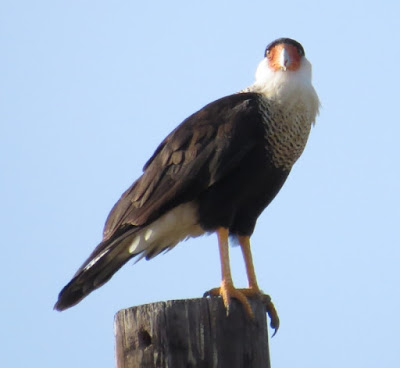 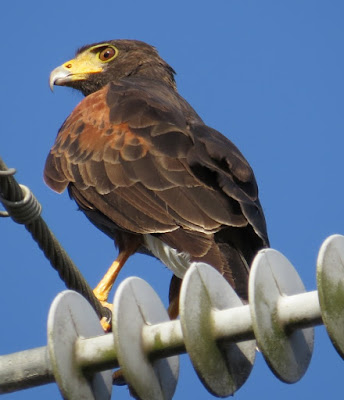 From there we headed down to the HEB on Trenton and 10th, and I was really beginning to sweat a little as we waited around for about 20 minutes before a small flock of Green Parakeets decided to screech past!  That was good enough for Joakim, so we blasted down Colonel Roe to Dallas to try for the parrots.  We parked, then saw two silent birds come in down the street, but we couldn’t see where they landed.  After checking the length of Cynthia (where we also witnessed a spectacular swirl of Purple Martins) we had three more silent parrots fly by, and that’s all we had by the time the sun set, so we headed home after that.  Joakim missed the Common Nighthawk I heard on Cynthia, but as we pulled into the Inn’s parking area, a Lesser Nighthawk batted by low, so that was one last lifer for Joakim for the day!  We ended up with a whopping 101 species!  Bird list: