A Roll Down the Beach

Kay from San Antonio had been to the Valley before, but she had never gone “guiding”, so she and her friend Chris (joined by their local friend Denise) “signed up” for a road-birding trip down to Boca Chica Beach!  (I gave them a list of routes to choose from, and when they finally asked me what I would do, I said, “Well, if it were just me I’d do Boca Chica Beach as I still need Red Knot for the year!” J and that sounded great to them!) Aside from leaving later than anticipated (due to my own confusion – these “brain supplements” aren’t doing their job L), we had a chatty and uneventful drive out there (oh, except for getting turned around coming off the toll road L), but after a stop at the Stripes we headed straight to the beach, making quick stops for White-tailed Hawks and logging spoonbills and avocets on the way.


We actually ran into a couple of “rain dumps” heading out (there was a particularly good downpour just before hitting the beach), but the beach itself was in great shape for driving; even the road’s end (which is usually like driving through a snowbank) was smooth as silk!  The tide was going out, so we headed south towards the mouth of the Rio Grande, and in addition to the usual Laughing Gulls and Brown Pelicans offshore, we initially had a couple of Ringbills and later a couple of big ol’ Herring Gulls!  We had a nice selection of terns:  mostly Royals, but also several Forster’s, a single Sandwich, and a couple of Commons, plus a couple of Caspians on the way back.  Sanderlings were entertaining doing their little “mechanical toy” run, but also doing the “toy run” were the Piping Plovers!  Most of them didn’t have “bling”, but we had one that was well-tagged… 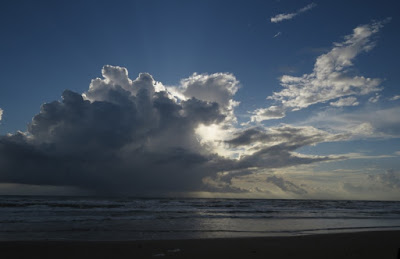 Storm over the gulf 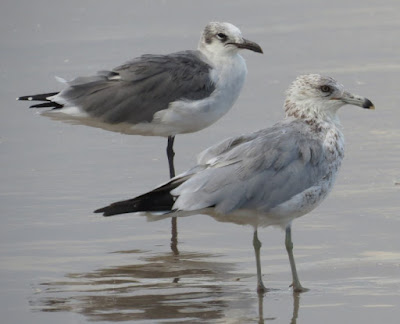 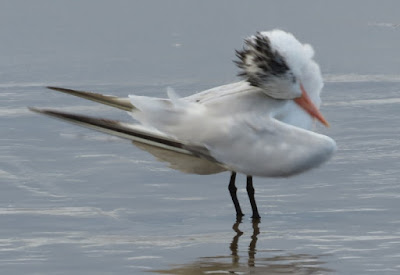 Royal Tern dolling himself up 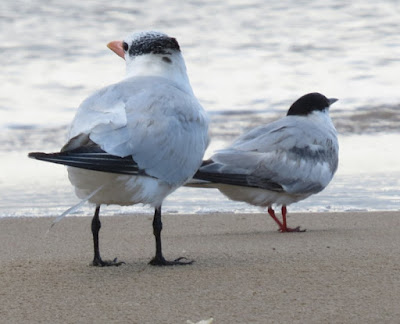 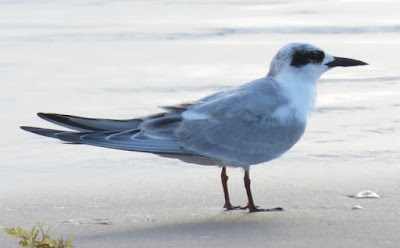 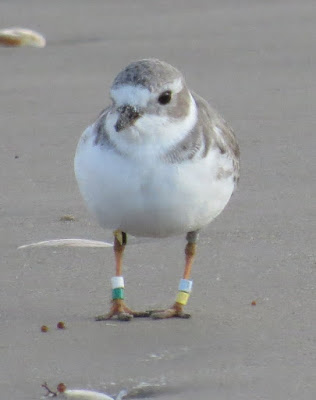 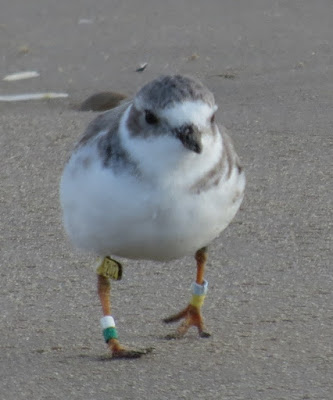 Same guy - you can actually see the tag number!  If you ever see a banded Piping Plover and can record all the bling, go to this website and they'll tell you where to send the info!

Kay also has a Subaru (an Outback), and she wanted to see how “Heppy” (my Forrester) performed on the beach; there was one spot where we squeezed by at a rather steep angle, and she mentioned that the Subarus have a “boxer engine” that allows them to do that without tipping over!  Down at the mouth we had several herons (not as many Great Blues hanging out in the dunes as usual), and other shorebirds included Willets, Ruddy Turnstones, and singletons of Black-bellied and Snowy Plovers.  But with the sun at a better angle heading north, we noticed a darker-mantled gull in with the tern flock – a Lesser Black-backed!  Woo hoo! J  That was a very pleasant surprise year bird!  But a little further down we spotted a few “giant Sanderlings” in the form of the coveted Red Knots (except that the juvies, which we had, have greenish legs)!  Several Ghost Crabs were very entertaining, and just after turning back on the main road a couple of mystery empids showed up, but they were too far away for me to tell what they were; I snapped off a couple of pictures to try and figure out later…  (My educated guess is Least, but I have the pictures out there on a forum for discussion...) 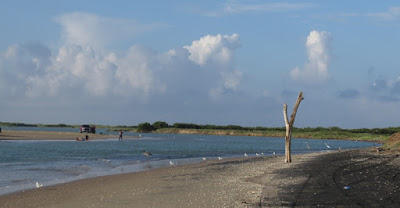 The mouth of the Rio Grande and Mexico beyond 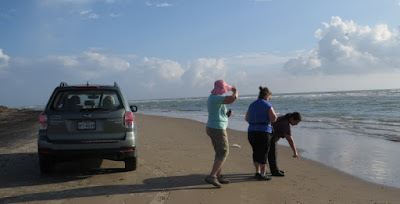 The girls (and Heppy) on the beach 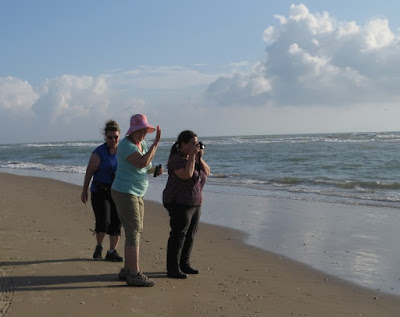 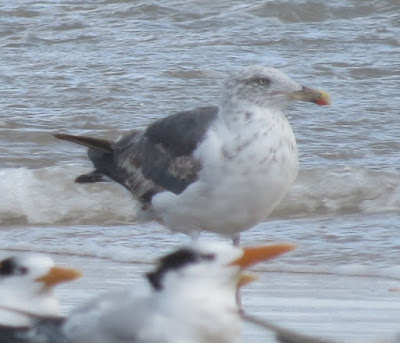 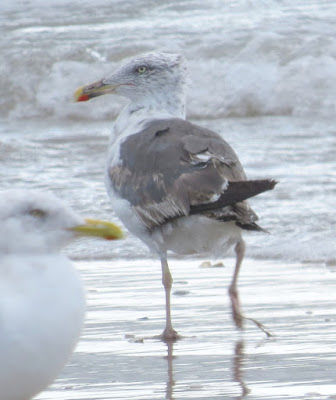 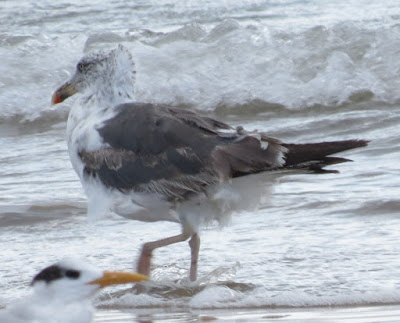 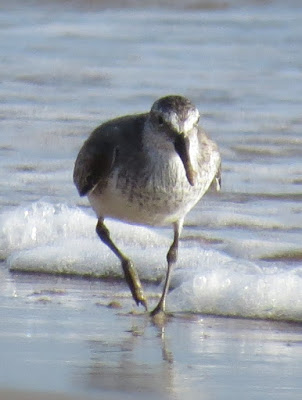 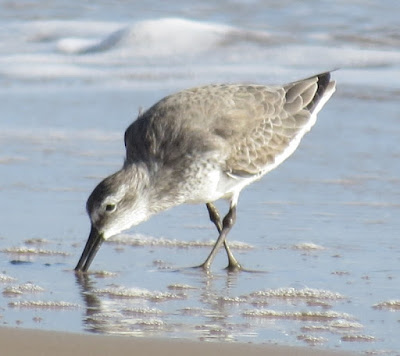 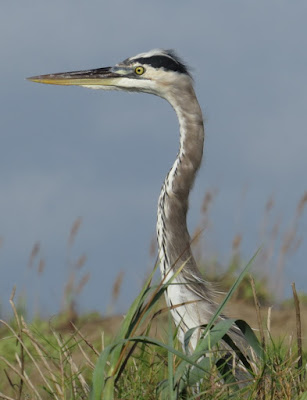 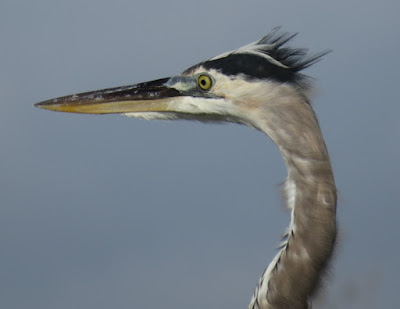 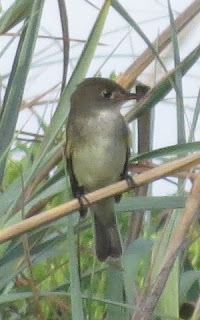 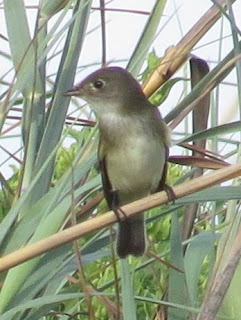 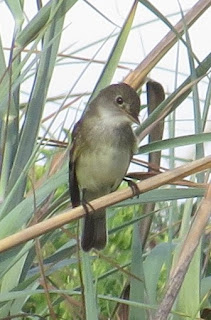 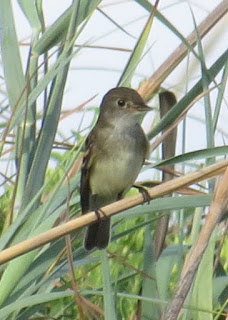 Back up on the main road we just kind of poked along (with some stops for photo ops with Space X J), but what birds there were out on the flats were way out there.  At one stop we did manage Reddish Egret (one of each morph) and a skimming Black Skimmer, which Kay was thrilled with!  But Chris spotted the prize in the form of a Peregrine Falcon sitting out on the flats!  Later on we also spotted an Osprey just sitting on the ground with an attendant Laughing Gull that we assumed was waiting for a scrap of fish…


We turned off on Palmito Hill Road and made a brief stop in the parking lot there, adding a pair of Curve-billed Thrashers and our only Golden-fronted Woodpecker of the day on the railing!  A Lark Sparrow was on the wire, along with several Mockingbirds.  Heading down the road, we managed to pull out Kay’s life Cassin’s Sparrow, and lots of Eastern Meadowlarks either sang or flew low over the vegetation.  A Cliff Swallow flew over, showing its “headlights” very nicely, and at the cactus patch a pair of Cactus Wrens actually showed (they had been absent the last several times I was there)!  After the turn we had more thornscrub stuff at least vocalize, like Green Jays, a Ladder-backed Woodpecker, and White-eyed Vireos, and an Eastern Wood Pewee posed nicely.  Several Bobwhite ran around the road in front of us, and we also had a couple of Common Ground Doves show well, but no Roadrunner this time L.  We thought we had an Altamira Oriole calling, but it turned out to be a Mockingbird…  At the turnaround the girls noticed a batch of black butterflies that turned out to be Sickle-winged Skippers, so I stepped out of the car to shoot them and logged a calling Long-billed Thrasher while I was at it…  On the way out a lovely Scissor-tailed Flycatcher flew across the road, and a Loggerhead Shrike posed on a yucca.  A Cave Swallow sat on a wire for good views as well. 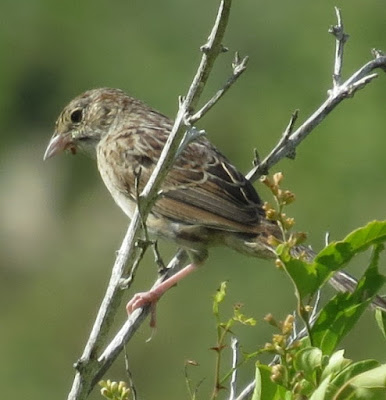 The girls along Palmito Hill Road 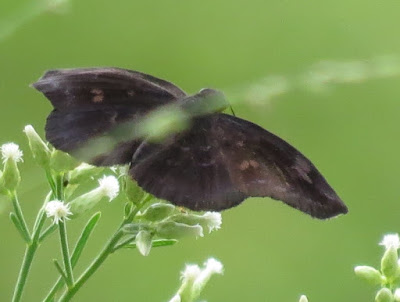 From there we zipped up the main road, stopping briefly for a Harris’ Hawk, and enjoying a big flock of White Ibis crossing the road! We stopped at the traditional falcon stop, but no falcons were to be had.  We did manage to add Black Vultures to the day list as they were soaring around the famous Dump…


Headed home after that, with a modest 60 species for the morning.  Bird list: