Catherine (a fellow Subaru owner from Colorado) opted to drive today, so since she was interested in out-of-the-way places, we headed out to Cameron County first, and she was particularly interested in Sabal Palm Sanctuary as she had seen a film about it!  (She also had a new Canon Powershot SX60 that she wanted to practice using, so we were shooting - no pun intended - for photo ops!)  The childlike wonder began the minute we came in the entrance road with Verdins and Carolina Wrens calling, and after checking in at the Rabb House, we headed out on the trails!  Catherine was one to take delight in thoroughly enjoying the bird, but as is common on a woodland trail, sometimes they aren’t very cooperative! L  The wrens and Olive Sparrows were particularly stubborn as per usual; even the normally curious Orange-crowned Warblers didn’t want to play ball!  On the Resaca Trail a nice Couch’s Kingbird sat on a dead tree, and of course the minute I got the scope on ‘im he took off!  (A lot of the buggers were like that today…)  We found an eye-level Eastern Phoebe, and I kept hearing a Ringed Kingfisher, but could never spot him.


On the upper trail a nice Ladder-backed Woodpecker showed well, but a couple of Yellow-rumped Warblers weren’t nearly as cooperative…  A Gray Hawk was whistling fairly close, and I spotted him in a tree, but again he took off the minute he realized he was being watched, but thankfully he circled several times overhead, so Catherine got great looks!  A Long-billed Thrasher finally sat out in the open for us, and when we eventually made it to the big blind, that’s when the show really started:  the kingfisher was on a big snag, so we were even able to nab a few blurry pictures before he took off!  Both Least and Pied-billed Grebes showed well, along with lovely Blue-winged Teal and the more subtle Mottled Ducks.  Something spooked them off their island, which revealed that a Redhead (with two wives) were also in the mix! 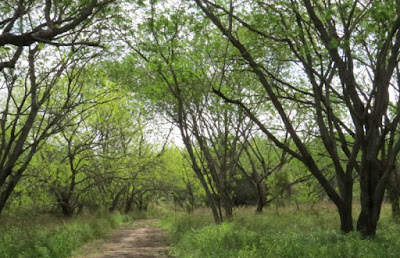 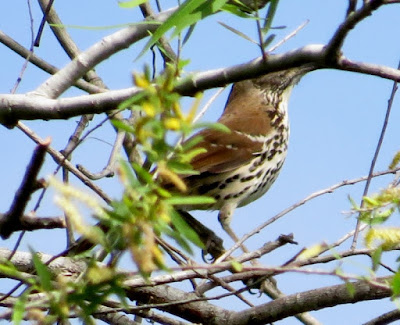 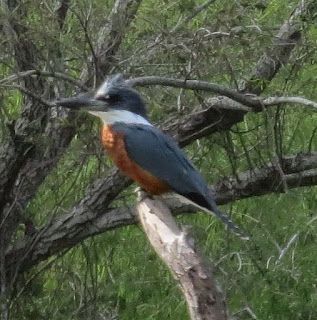 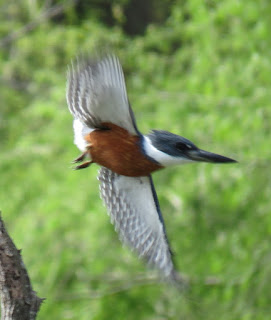 Catherine was able to capture his takeoff!  ©2018 Catherine Hagen 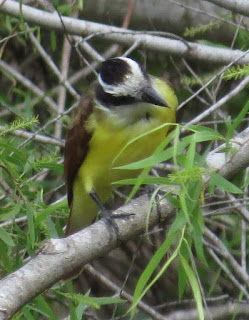 Great Kiskadee (showing his "derby" above) 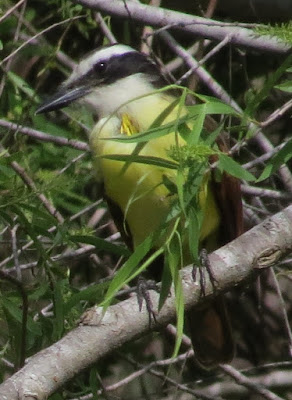 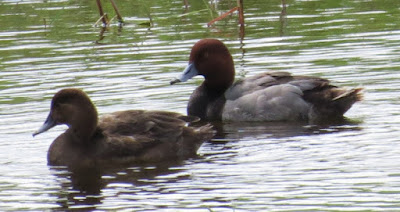 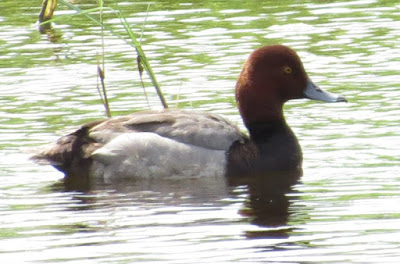 We headed back to use the facilities, where I got distracted by the new butter garden:  the mistflower (if that’s what it really was J) was covered with Dusky-blue Groundstreaks!  A White-patched Skipper also came in, and by the time Catherine caught up with me, we were experimenting with her macro lens so she too could shoot one of the exquisite little groundstreaks (I have the SX50, so they’re just different enough that I ended up screwing up her settings instead of fixing them… L)! 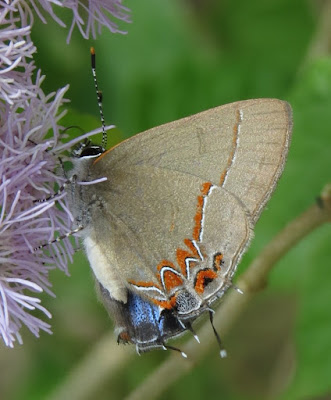 Dusky-blue Groundstreak - they often rub their hindwings together so you get a glimpse of the dorsal color! 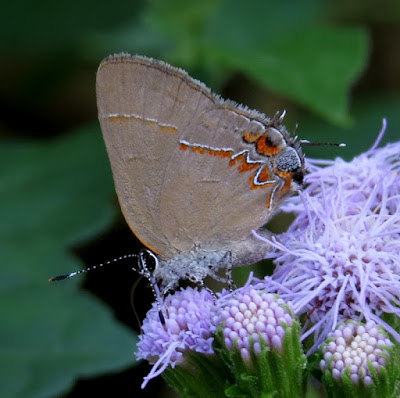 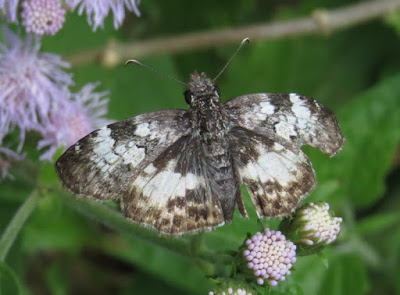 
We headed to the feeders from there, where a 15 minute wait brought in Cardinals, Green Jays, and even Chachalacas!  Catherine was standing so saw more of the ground than I did, and came over to me asking, “What’s this bird?”  She had a picture perfect photo of an Olive Sparrow that had been parading back and forth on the ground! J  One of the guys who had joined the throng mentioned that he had seen orioles in the old butterfly garden, so we headed over there, once again getting distracted by butters!  We eventually saw the Altamira Oriole, and on the way out a Cloudless Sulphur actually sat on the ground long enough for pictures! 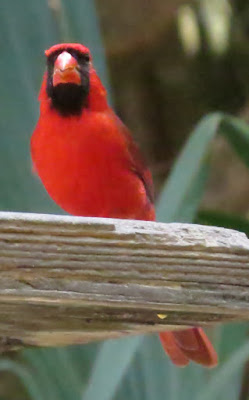 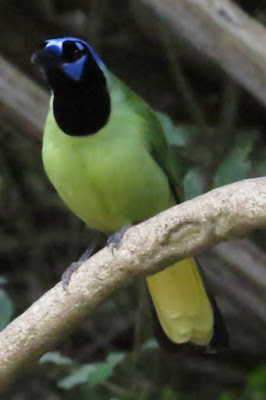 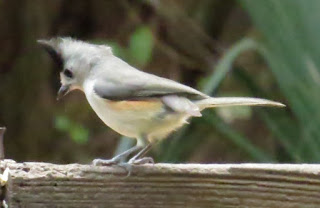 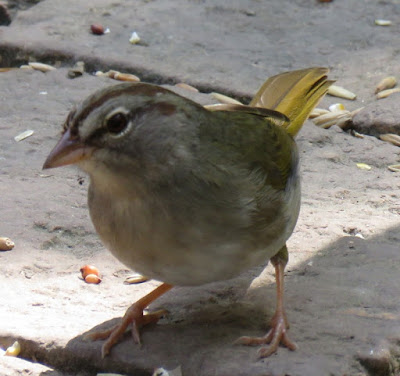 Catherine caught this Olive Sparrow that was blocked from my view!  ©2018 Catherine Hagen 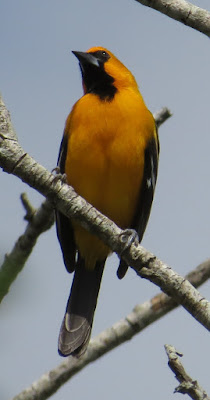 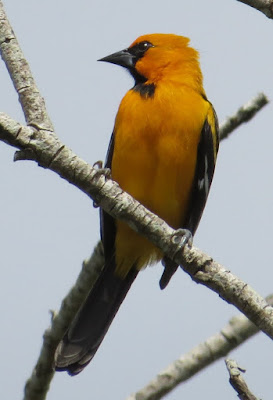 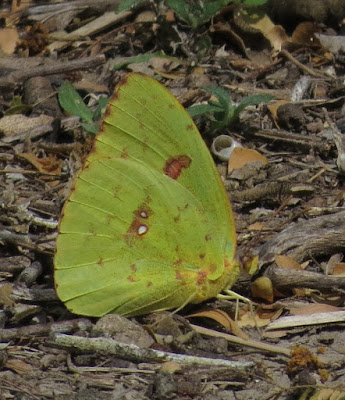 Old Port Isabel Road was next, and boy, had they ever improved the whole road – even that really dicey spot where one had to drive over boards was smoothed out!  (She wasn’t afraid of “bad roads” anyway; she said, “You should see some of the places I’ve taken my Tracker!” J)  We stopped for a Harris’ Hawk, and while Catherine enjoyed him through the scope I scanned the immediate area, and guess what was sitting in a bare bush on the other side of the road!  I virtually grabbed the scope from under her nose and could barely get it out I was so excited – finally an Aplomado Falcon had shown up!!  It wasn’t the best of views, as he was distant with a lot of heat waves, but we positioned ourselves where we got a little better angle and she could at least see the pertinent field marks!  Eastern Meadowlarks serenaded us, and Cassin’s Sparrows singing all over; one finally landed on a cactus closer to the north end.  The canal had Shovelers, a Snowy Egret, Neotropic Cormorants, Mottled Ducks, a Great Blue Heron, and an unidentified kingfisher that stayed frustratingly hidden.  At the north end we paused long enough so I could enter the eBird list, where a White-tailed Hawk circled in front of us at the 11th Hour!


We went straight to the Flats on South Padre after that but ran out of time L.  But with what little time we had we got great looks at the regular larids and shorebirds (although the plovers were AWOL, except for the Black-bellied).  A Reddish Egret danced in the sun, and since Catherine was overwhelmed and “over the moon” (she had been here wind surfing before, but not birding), we agreed to come back the next day, as it was the only place not forecasting rain. 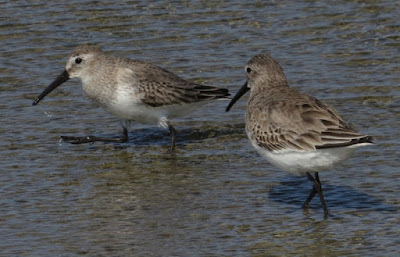 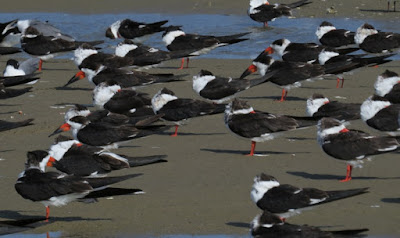 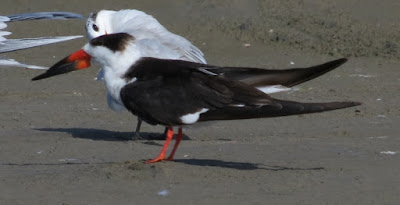 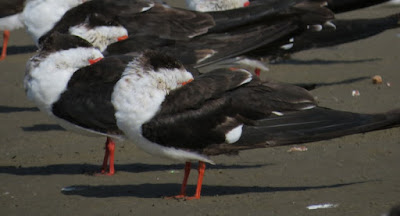 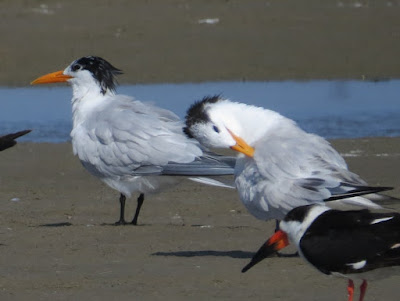 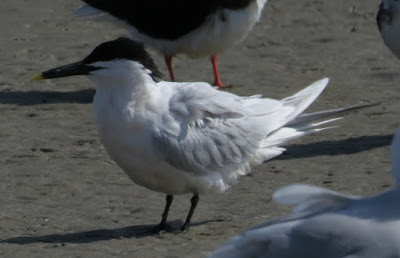