For their last morning, the girls wanted to go somewhere “pretty”, so what better place to visit than Santa Ana NWR?  I suggested doing a nice long loop walk with regular resting intervals, and they were game to do that (and that allowed both Pauline and myself to keep a running eBird list), so we left the Inn a little later than the usual departure time in order to arrive at the refuge (only a 15 minute drive from the Inn, if that much) by sunrise.


We took the Willow Lake Trail to start, picking up all the regulars:  Couch’s Kingbirds were particularly plentiful, and hundreds of Red-winged Blackbirds wafted overhead.  We got glimpses of a few members of various feeding flocks (a titmouse here and a kinglet there), and near the turnoff to the Cattail Lakes Trail (where that beautiful, Spanish Moss-laden forest is), a couple of Clay-colored Thrushes sat up on a dead tree while a third one tuck-tucked near the pond next to us!  Although we heard the happy whistle of the Altamira Oriole several times (Ginger said it reminded her of some of the lilting Norwegian languages she’s heard), we never did spot one, although we had a great look at one of their huge bag nests!  The Chachalacas were beginning to chorus, which was fun, but as we continued on, we suddenly heard the buzzy trill of a parula!  Knowing the Tropical Parula was around and singing, but also knowing that their songs (at least around here) can sound identical to a Northern Parula’s, I wanted to track this guy down for a visual!  We backtracked, getting turned around on the Cattail Lakes Trail before finally connecting with the continuation of the Willow Lake Trail, but we could no longer hear the bird.  We did have terrific views of various ducks (including some stunning Cinnamon Teal) and a lone Common Gallinule at the little “viewing window” at the culvert, though!  Birding buddy Huck Hutchins caught up with us about then, also looking for the parula, so after exchanging pleasantries he continued on while we went back to the Chachalaca Trail. 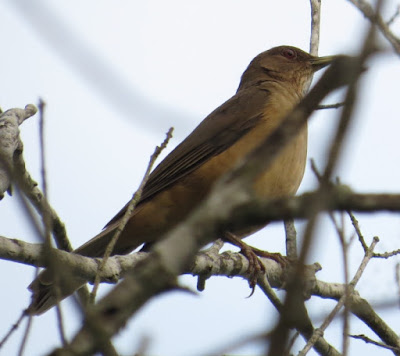 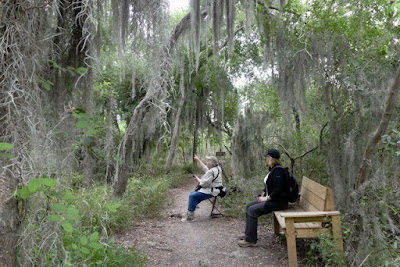 
There’s a little trail that connects the Willow Lake Trail to the short-n-easy Chachalaca Trail, so we took that and headed to the first Willow Lake overlook.  After enjoying Black-necked Stilts, Least Grebes, and more ducks, we heard the parula again, and it sounded like he was coming closer!  So we hurried back to the “window” where Pauline waited for Ginger while I went on ahead, and the bird was singing right in front of me!  I couldn’t see the thing naturally, and Huck was just ahead, so I got his attention, and he confirmed that it was the Tropical as he had gotten terrific looks!  I was just about ready to go running back for the girls (my texts to Ginger apparently hadn’t gone through L), but they had just arrived, so as Huck continued on the three of us chased the thing as he worked his way back the way we had come, then finally flew up into a somewhat open tree right over the trail!  Perfect looks, and a great concert, too!  That was worth working for! J Ginger on the Willow Lake Trail 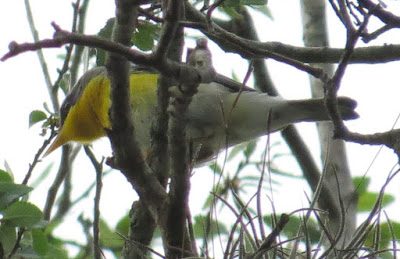 A few shots of the Tropical Parula; the bottom picture shows his wing bars. 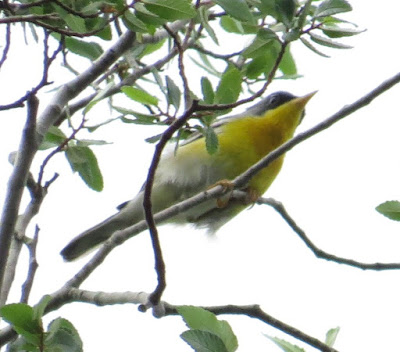 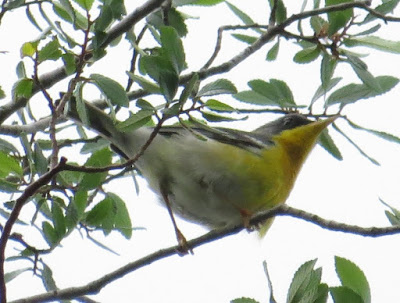 Returning to the Chachalaca Trail, we took our time enjoying the rest of the birds in the lakes:  more ducks of course (including some American Wigeon), but also Lesser Yellowlegs, and even a Nutria!  A Beardless Tyrannulet sang nicely, but started to lead us on a Wild Tyrannulet Chase back to the trailhead, so the girls were very willing to accept a good “listen” with that one!  Conversely, a Long-billed Thrasher sat right out in the open for us for great photo ops!  An Olive Sparrow showed well for Ginger at the large blind, but Pauline missed it… L 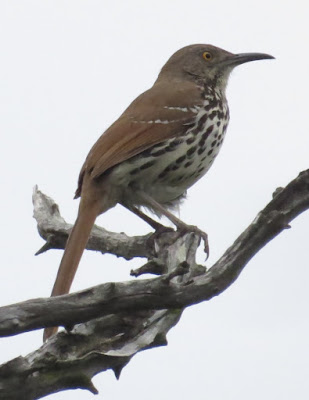 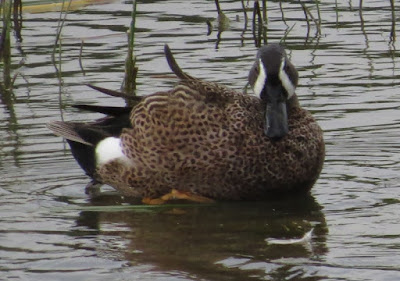 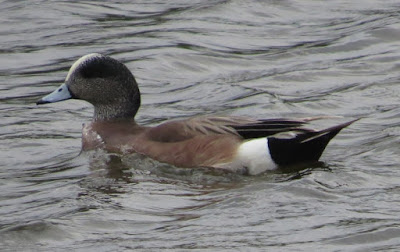 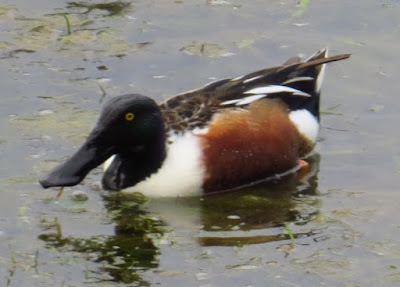 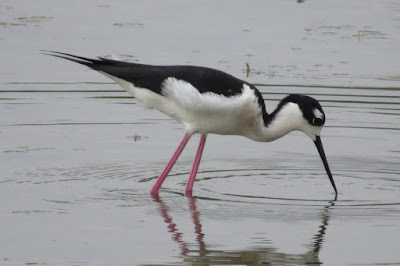 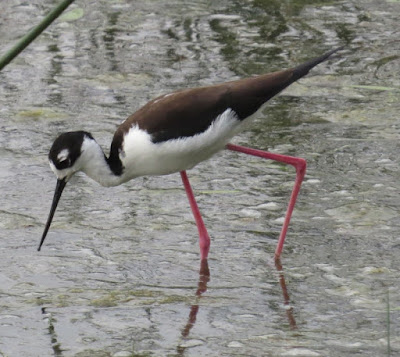 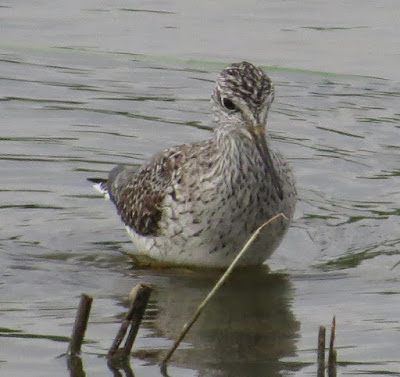 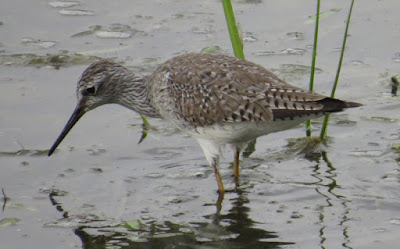 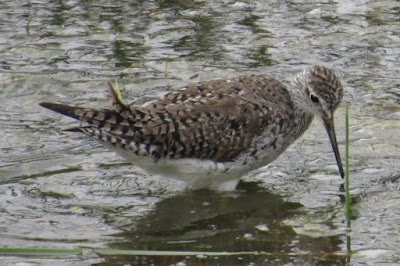 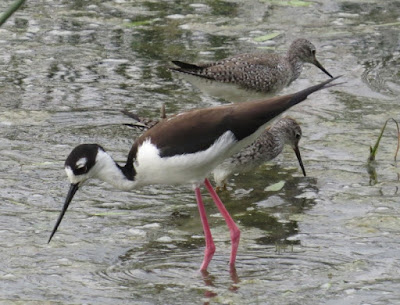 Stilt and two Lesser Yellowlegs together


We made our way to the old butterfly garden, where at the turnoff what may have been the same Rosebelly Lizard from the last time I was there was sunning on the same log, doing his little pushups! J  At the bench along the sidewalk we rested again and had a nice Red-shouldered Hawk circling overhead, and a Ladder-backed Woodpecker that laughed and darted from the dead tree we were staring at.  The girls were game for the Tree Tower, so up we went (they beat me up there where they ran into Huck again, who had seen a Broad-winged Hawk)!  The view is always stupendous, but we didn’t see much except a pair of Couch’s Kingbirds and a Kiskadee…  We also checked out the photo blind, as some other birders I had run into somewhere else the previous week told me they were stocking it, but it looked pretty empty when we got there, except for a little Lincoln’s Sparrow that was checking things out. 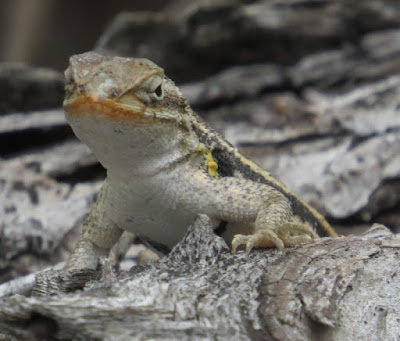 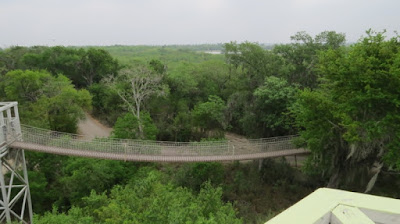 View from the Tree Tower (looking towards Pintail Lakes) 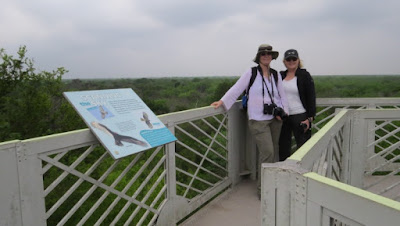 From there we headed to Pintail Lakes, where we ran into Huck again J, and he pointed out a few things he had seen such as some lady Scaup and a Ruddy Duck.  He also spotted both Greater and Lesser Yellowlegs behind us, and as we made our way to the end of the trail we enjoyed hooting Pied-billed Grebes and a pretty Vermilion Flycatcher high up in the tree.  Huck had heard a Ringed Kingfisher earlier that I missed, so I was anxious to see if it might be in that last pond, and sure enough, a nice female was perched up in plain view!  (Huck failed to conjure us up a Green Kingfisher, though… J)  Several White-faced Ibis lifted off as we approached, and a Solitary Sandpiper called and made haste towards one of the other ponds.  After resting on the bench and trying to tally all the waterfowl we were seeing, we finally headed back to the parking lot and ultimately back to the Inn, with a respectable 66 species for the morning (which included some Scissor-tailed Flycatchers seen on the way home)!  Oh, and another Olive Sparrow finally did pop up for Pauline! J 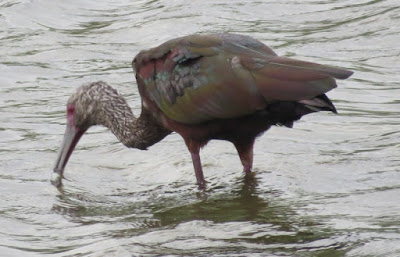 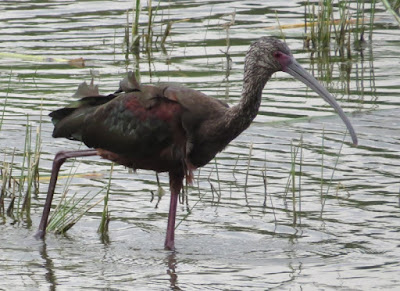 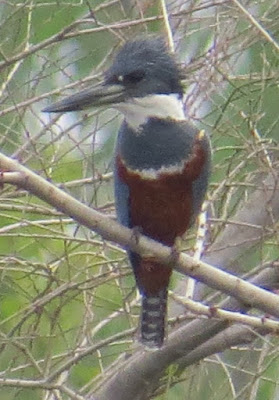