A Morning at the Blind

While checking Gary and Linda from Boerne, TX, into the Inca Dove Cottage, I learned that on the way down they were discussing that it might be fun to hire a guide for a morning, so we booked right then and there! J  They both had “bridge” cameras:  Gary had a Nikon Coolpix (which was much more fancy than any Coolpix I had ever seen, with the equivalent of a 2000 mm lens!!), and Linda had a Canon Powershot SX 60, and confessed that she was still learning how to use it!  But they both got lots of practice today!


I had forgotten that with the advent of DST we would be heading out in the pitch L, but I figured that if the parakeets were still staging at Bus. 83 and Breyfogle, we would at least hear them.  We didn’t, so we headed on to Bentsen with the idea of perhaps going back to that intersection later in the morning.  It was light enough to see by then, and we had a nice little feeding flock just across the street from the parking area:  a Black-crested Titmouse was singing his little heart out, and a little pishing brought in a gnatcatcher, an Orange-crowned Warbler, and a nice Black-throated Green Warbler!  But I was really trying to locate the Couch’s Kingbird that was breer!ing in a close tree, and the pishing interested him enough to come right out on the wire!


We meandered towards the Gatehouse Feeders, stopping at the canal to enjoy the pair of Black Phoebes.  My friend Anne Mayfield rolled by all dolled up in her biking outfit (didn’t even recognize her at first J) and said she was on the way to the Hawk Watch!  An Osprey drifted overhead while we were there at the canal, and as we continued towards the gate a Caracara powered overhead.  We had arrived before the visitor center opened, so we were sent back to get our bands by the volunteer L, and by that time not only did we bag a pretty Buff-bellied Hummingbird at the feeder, but the tram was just about ready to roll as well, so we decided to skip trying for the parakeets and took the tram to Kingfisher Overlook, where a pair of cavorting Hook-billed Kites had been photographed the previous week! 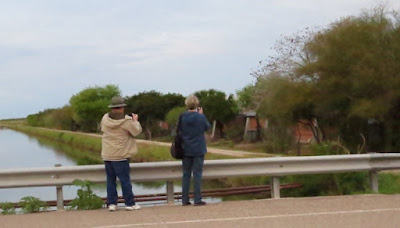 Shooting the Black Phoebe on the pipe

We spent about 15 minutes there, where the only kite we saw was a distant White-tailed, but there were tons of Turkey Vultures lifting off over the horizon, and eventually three Shovelers and a flock of Ring-necked Ducks buzzed by.  Way down the Resaca were a handful of Snowy Egrets and a couple of Neotropic Cormorants, but nothing else came by.  After the volunteers filled the feeders behind the “wall”, we peeked in for about five minutes, but while the Redwings made a lot of noise, no one partook, so we decided to head down to the Green Jay Blind.

Ring-necked Ducks way out in the Resaca

That’s where all the action was!  A Green Jay was already there attacking the peanut butter mixture, and as we took our places along with another couple who was also photographing, it wasn’t long before we logged Kiskadees, Chachalacas, White-tipped Doves, Cardinals, adult and immature Altamira Orioles, a Lincoln’s Sparrow, a couple of Golden-fronted Woodpeckers, and even a pair of Hooded Orioles!  A Long-billed Thrasher made a very brief appearance, and both an Orange-crowned and Yellow-rumped Warbler remained hidden to the side along with a Ladder-backed Woodpecker, but the regulars put on a great show!  After we left I was disappointed that an Olive Sparrow never showed, but on the way to the Old Military Highway (OMH) route, Gary showed me a “What’s this bird?” picture he had taken at Santa Ana the day before, and it turned out to be the Olive Sparrow! J  Just before we left the park a White-eyed Vireo singing in our faces got a bunch of us down by the old dragonfly pond, but he remained stubbornly sequestered in his tree, only giving glimpses of movement. 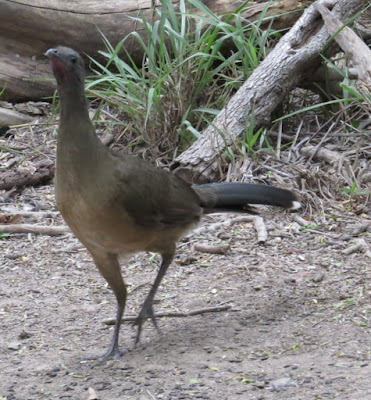 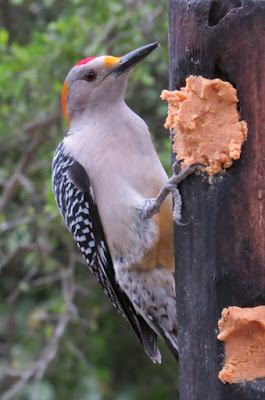 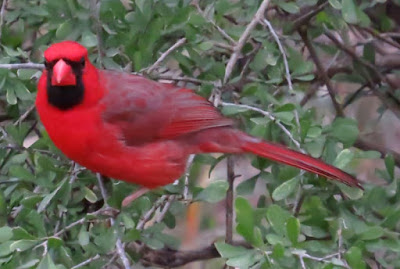 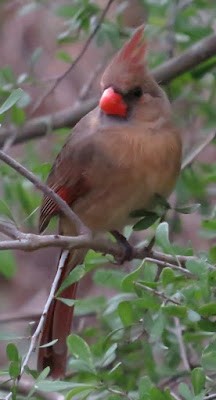 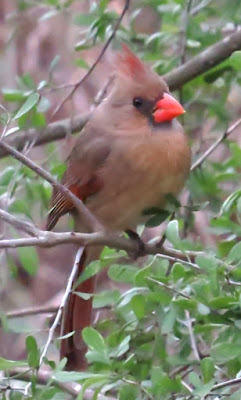 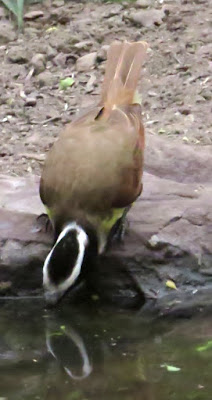 Kiskadee showing his crown circle as he drinks 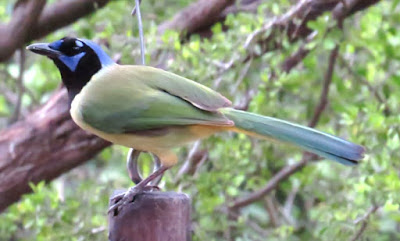 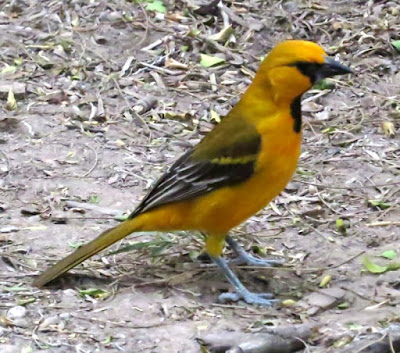 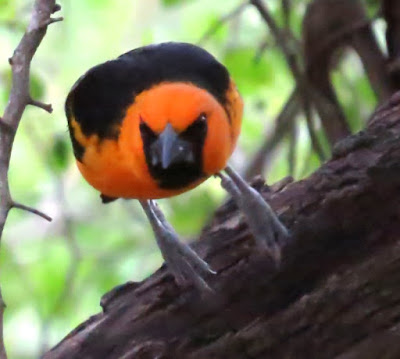 Adult Altamira - note that he's actually in mid-air in this shot! 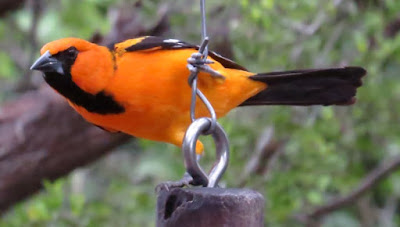 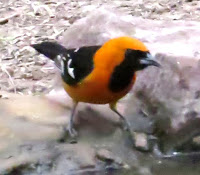 Male Hooded Oriole - note the larger area of black around the face and the lack of an orange shoulder bar!

OMH was rather dead (except for a Chipping Sparrow that popped up at the very end), so we scooted over to Anzalduas, where we had a nice Red-tailed Hawk along the entrance road.  A cold front had blown through the night before, and the wind was picking up again, so we didn’t see many songbirds except for a couple of Loggerhead Shrikes.  The scaup mob had been whittled down to three birds (at least what we could see), but Coots were still plentiful.  A Forster’s Tern batted and dove into the Rio Grande, but we couldn’t even kick up an Osprey this time!  A Cooper’s Hawk made a brief run over the river by the dam, and swallows were swooping around as well; the only ones I could make out for sure were Tree and Northern Rough-winged.  A flock of Western Meadowlarks fed in the grass, then flew around and landed in some dead trees as we circled the area. 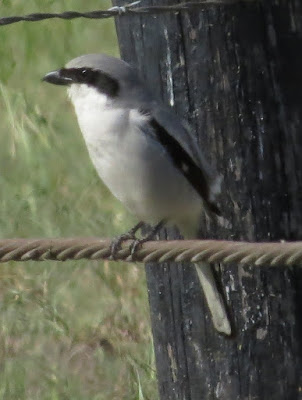 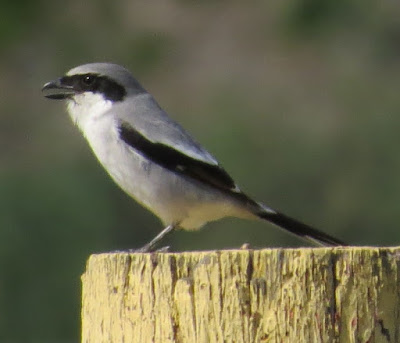 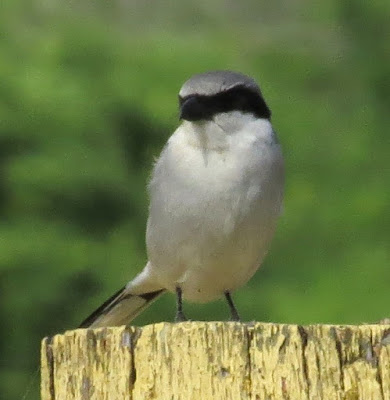 We had to scoot after that, so we headed back home with a modest 54 species for the morning.  Bird list: