NOTE - Due to "operator error", I lost most of my pictures of this trip (the only ones I could recover were the ones I culled in the first place...), so Carol very generously shared some of hers, which are noted as such!

Carol was a Canadian escaping the cold of Ottawa, so just wanted a relaxing morning learning our local birds a little better, as she still considered herself “new” at this!  One thing she did desire was a better picture of a Vermilion Flycatcher (she had gotten a red dot at Big Bend), so we headed to Anzalduas Park with a trip down the Old Military Highway levee to kill time till the park opened!


One thing Carol noted about birding in Ottawa in summer is that the birds are all up in the leafy trees, making it difficult to see them (a bird walk she went on logged 20-something species, but they were almost all heard-only)!  I lamented that that’s a common phenomenon, and why it’s so important to become familiar with the calls!  But we tried to stop for wire birds on the way, including Loggerhead Shrike and even Mourning Doves!  On the way up to the levee a pair of Common Ground Doves shot across the road, but from then on we unfortunately did run into a lot of “heard-onlies”; despite some coaxing, many of the birds stayed stubbornly hidden (like Long-billed Thrasher, Bewick’s Wren, and Olive Sparrow), but some were more cooperative, like a gang of Green Jays next to us making a fuss and traveling from tree to tree!  A Harris’ Hawk chose a horrible place to perch between two Border Patrol vehicles (the one had pulled over so we could pass, and here we were holding up the show looking at the hawk), and a White-tailed Kite gave brief views over the trees.  An Altamira Oriole sat in the open but dropped down before Carol could see it L, but one of the few visible birds was a big Great Blue Heron in a holding pond!  Both Tropical and Couch’s Kingbirds vocalized nicely and gave views, along with a stripe-headed Kiskadee and both types of woodpeckers!  Nothing was at the canal, but as we passed the Butterfly Center an Eastern Bluebird posed on the wire!  After that we finished the road and the eBird list, then headed back to Anzalduas. 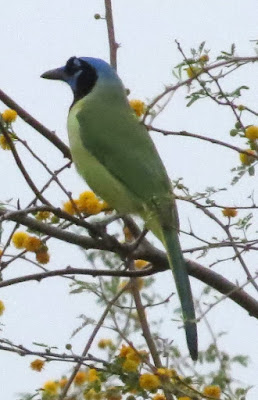 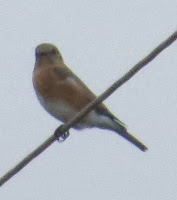 Again, on the way there, a beautiful Kestrel posed for pictures, and another one posed (along with a shrike) on the entrance road to the park!  The canal held two Great Egrets and a Tricolored Heron, and we went slowly along the spillway, only picking up a pair of Pied-billed Grebes.  Carol passed on the Pipit Poke, but we did manage to get a flock of American Pipits over by that “government area”!  We passed a flock of Western Meadowlarks feeding in the grass before stopping at my favorite corner to check out the river; the scaup flock seemed to have disappeared (except for a couple of birds), although the coots were still around.  I got a glimpse of a “blue” kingfisher zipping behind the island (and apparently stopping), and after a while he started his machine-gun rattle to confirm he was a Ringed!  One of the Ospreys sat on a dead tree in the water enjoying breakfast. 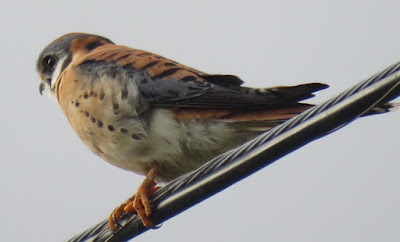 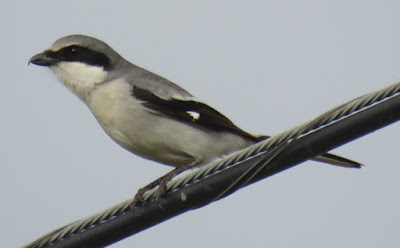 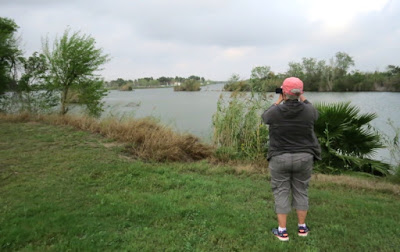 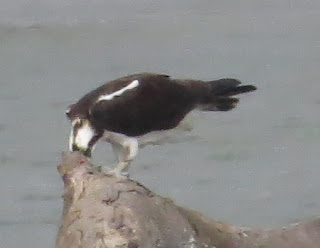 Continuing on, a Black Phoebe was on the pier, and after enjoying the aforementioned pipits, we finally spotted a male Vermilion in the open area on the west side of the park!  He wasn’t very cooperative for pictures, though, and like me, Carol had a Powershot that liked to make up its own mind as to what to focus on!  Over by the dam we took a peek behind, startling a pair of Killdeer on the way, and had good studies of both cormorants, Gadwalls, Mottled Ducks, a couple of White Pelicans, and even some Least Sandpipers!  Rough-winged Swallows were swooping around the dam structure and acted like they wanted to enter little openings therein, and we discovered where the scaup flock went!  Another Black Phoebe flopped around as well, and a pair of White-tailed Kites wheeled overhead, but we never could scare up the Vermilion (or another one) again, as the wind was picking up.  After several loops we finally headed out, but not before scaring up another bluebird!  Unfortunately that one was not cooperative for pictures, either…  But the best bird (in lousy light) was on the way out:  the continuing Say’s Phoebe along the spillway! 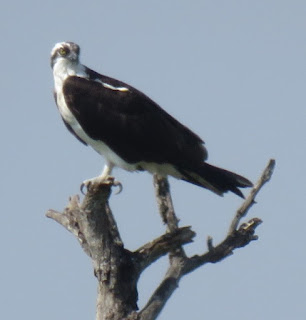 Yet another Osprey (or maybe the same one)
©2018 Carol Collier 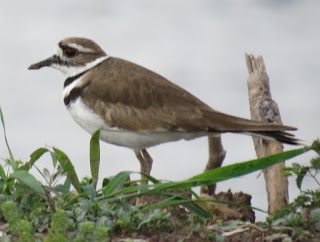 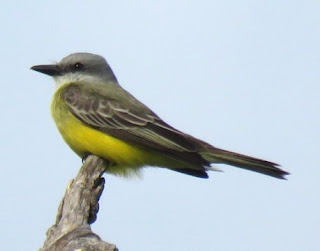 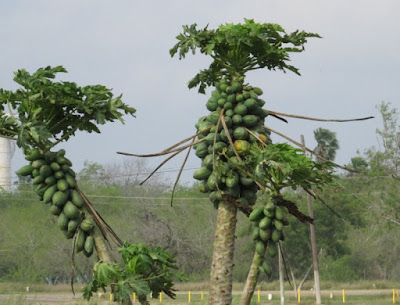 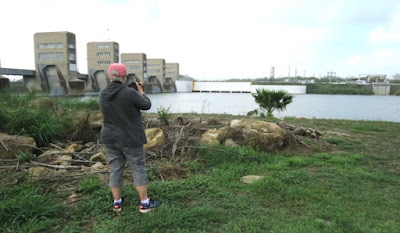 Carol at the dam 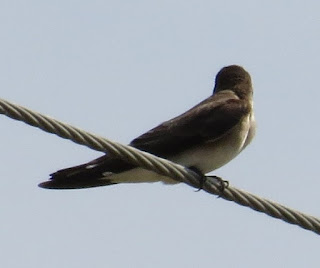 Headed home after that with 61 species for the morning, which is not bad for half a day!  Bird list: