Got a last-minute request from Keith on Sunday, letting me know that our veteran chaser friend George Kenyon was flying in to go after the Amazon Kingfisher in Laredo, and could I take him?  Sounded fun, as I hadn’t been up there myself (I got my year bird in Costa Rica J), so we took off Monday morning at six and took the scenic back way over (which is actually faster than heading up US 83).  It was a beautiful day:  my GPS worked great (except for heading us to a dead end once or twice) and we arrived at Zacate Creek where the good news was that there was a group of birders already there, but the bad news was that they hadn’t seen the bird yet!  L  Several people told us that the bird often moved over to Tres Laredos Park (Dos Laredos on Google Maps) after 9:00, so after checking out the area and exchanging a bunch of phone numbers we headed over. 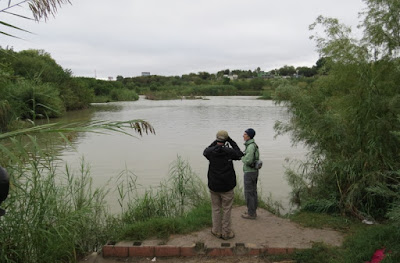 
We again were encouraged by the same group we had encountered at Zecate, only to discover that we missed the bird by about ten minutes!  L L  But she had flown upriver and around the corner, so George and I along with a Winter Texan from Mission named Diana hoofed down towards the bridge, where a small tributary forked off that we suspected she had gone down.  So we set up watch, enjoying Green Kingfishers, Great Blue and Black-crowned Night Herons, and an Osprey in the meantime.  George and I started upriver a little more when Diana waved us back:  she had spotted the bird deep in the vegetation on the other side!  Eventually she (the kingfisher, not Diana) came out and perched in the open (but still on the Mexican side), and after what seemed an eternity she finally went after a fish and then did a “victory lap” over the river where (as best as we can determine) she did fly into American air space! J  So George was a happy camper as this got him closer to his goal of 800 ABA birds! 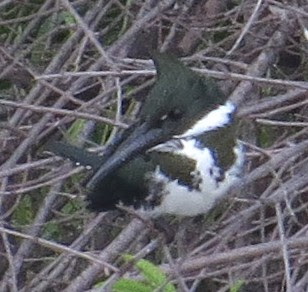 Third US record of Amazon Kingfisher (although still on the Mexican side at this point...) 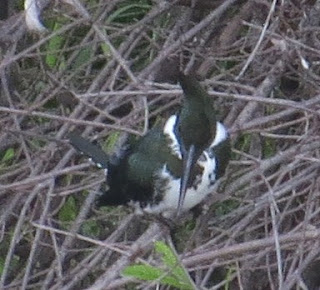 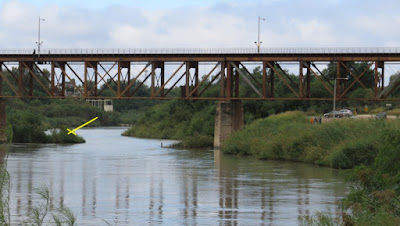 "X" marks the spot where the kingfisher hung out on the Mexican side while birders wait hopefully on the American side!


Since we still had much of the day, we made a quick stop at Salineño to do some feeder/river-watching before heading home.  With the cold front I was hopeful that the oriole action would be a little better than it was during Thanksgiving, and while Merle reported that the Audubon’s had come in that morning, it didn’t while we were there, and we almost missed the Altamira as we were literally out the door when it showed up!  Otherwise the regulars showed well:  Green Jays, Kiskadees, titmice, a Bewick’s Wren, White-tipped Doves, and a Long-billed Thrasher all put in an appearance.  Ironically, the hawks that had been terrorizing the place were nowhere to be seen (although Merle said they were still around).  At the river a couple of Gray Hawks were very vocal, and one finally sat up on the Mexican side, along with at least three Ospreys and a Spotted Sandpiper.  A couple of cormorants coming at us head on from upriver had us going for a minute, thinking they might be the hoped-for Muscovies!  Just as we were leaving we ran into Dick and Maco (!) who had come up on their own looking for the elusive Olive Sparrow and Clay-colored Thrush in particular, as well as another birder who had reported seedeaters at Chapeño. 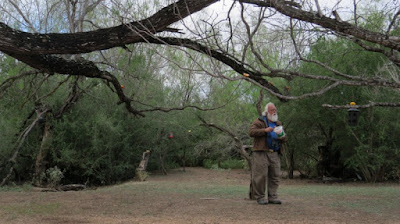 Merle sets out the goods... 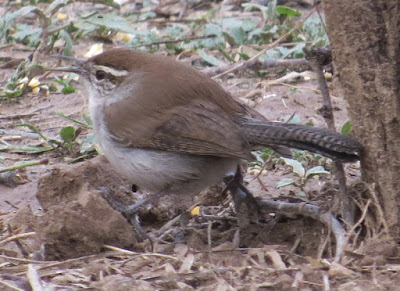 Bewick's Wren is quick to come in! 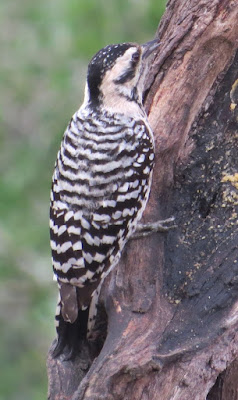 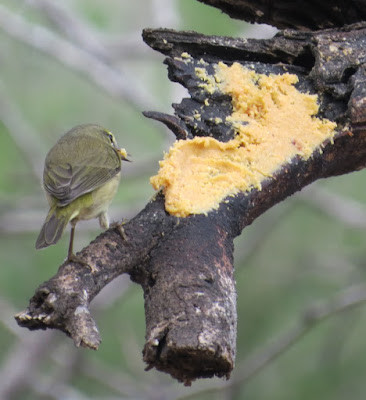 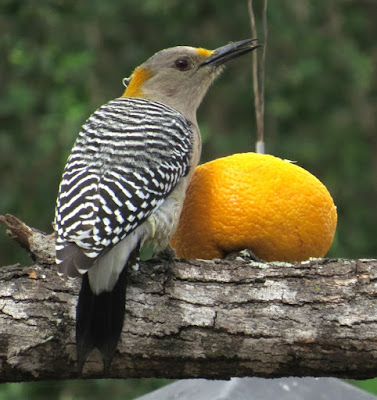 Lady Golden-fronted Woodpecker with her orange 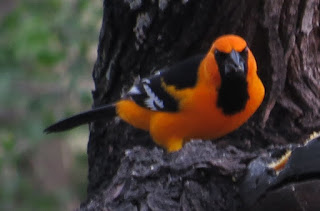 View of the Rio Grande from the boat ramp


We called it a day with quality definitely trumping quantity at 45 species!  Bird List: