Took visiting birders Dick and Mako from the UK out birding yesterday to pick up some South Texas targets; we started by driving the levee between Bentsen and Anzalduas, where the best bird was a very cooperative Gray Hawk!  Blue-gray Gnatcatcher and Orange-crowned Warbler was also new, but the House Wren was being stubborn…  After Anzalduas opened we cruised around there, picking up brilliant Eastern Bluebirds and Vermilion Flycatchers, along with a tittering Tropical Kingbird and peeping Black Phoebe.  By the river had nice looks at a Neotropic Cormorant and Mottled Ducks while a Ringed Kingfisher rattled well but only gave fleeting looks.  The crop-dusters were done so we finished up by scouring the field for Sprague’s Pipits; several popped up and called, but wouldn’t land and give us a look.  Both kinds of meadowlarks showed, however. 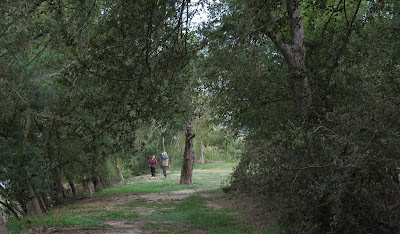 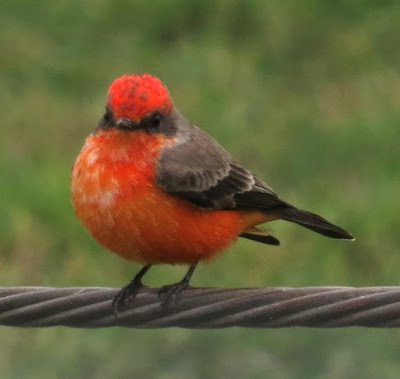 We swung by Hidalgo for the Monk Parakeets and some back roads in Alamo for Burrowing Owl and American Pipits (doing the same thing the Sprague’s did L), and several White-tailed Hawks were very cooperative for photos!  We then headed over to Frontera where things were a little more cooperative for looks:  a show-off Green Kingfisher got lunch from the boardwalk railing while a group of White Ibis fed in the shadows.  An Altamira Oriole called but only allowed a fleeting glimpse for Mako, but at the feeder areas we got great looks at Chachalacas, White-tipped Dove, Green Jay, Black-crested Titmouse, and a Buff-bellied Hummingbird (along with the fat resident Fox Squirrel…). 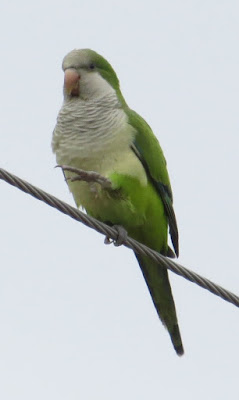 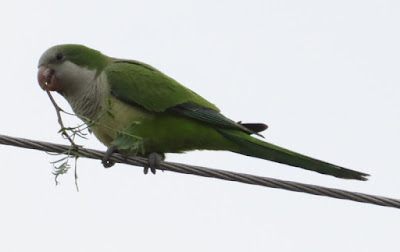 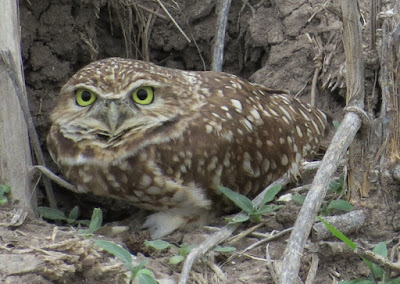 Probably the same Burrowing Owl we had with Gary and Sons, only is a little different pose (notice the furry feet)... 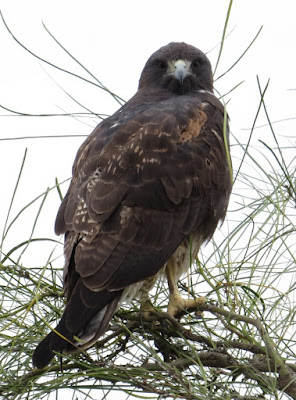 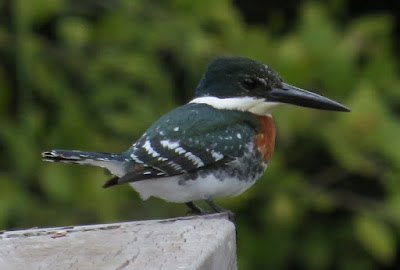 Green Kingfisher on the boardwalk at Frontera 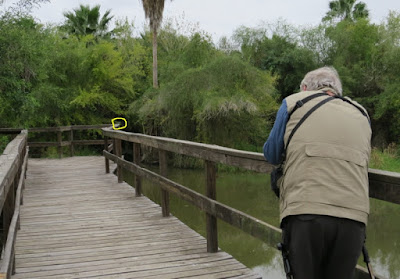 Dick getting his own shot (yellow circle marks the spot)

At Estero Ranger John arranged for us to take a tram as one of our guests had limited mobility, and after getting our fill of the many great ducks and grebes off the deck (including a pair of Cinnamon Teal), we headed back to the Tropical Zone where we looked in vain for the Perching Saliana (probably got blown south), then headed over to the levee where we saw lots of goodies, including oodles of Stilt Sandpipers and Long-billed Dowitchers hanging out, as well as Black-necked Stilts, Avocets, Spoonbills, gobs of White Pelicans, and a mob of Black-bellied Whistling Ducks.  A nice Ringed Kingfisher perched for everyone, but the star was a hovering White-tailed Kite right in front of us!  A swing around Dowitcher Pond produced two female Buffleheads in addition to more Cinnamon Teal and other ducks, and finally back at Alligator Lake we nabbed the Yellow-crowned Night Heron and Pauraque (John was making a statement about how “difficult” it was to get ;-)). 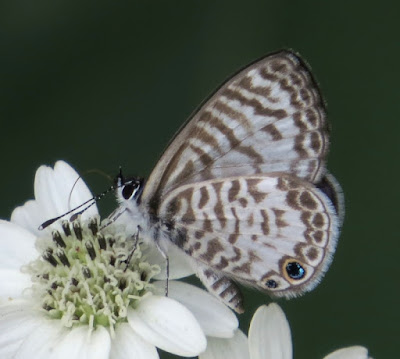 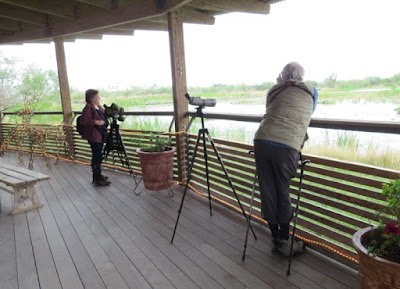 Mako and Dick check out Ducks from the Deck... 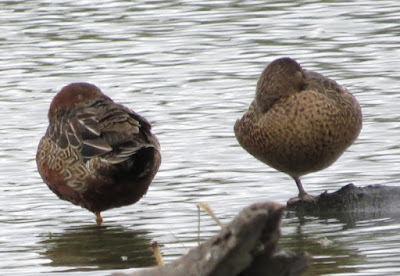 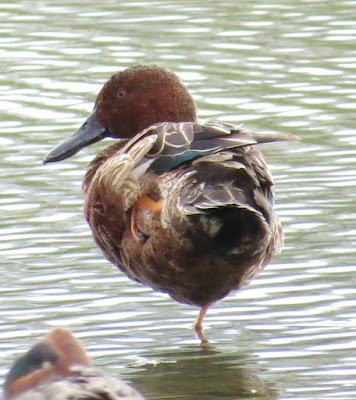 The male isn't quite fully cinnamon yet... 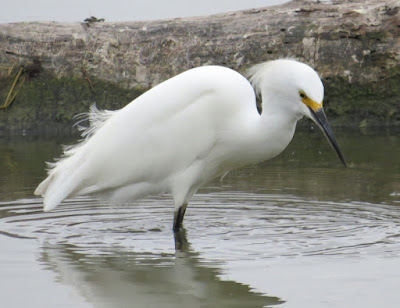 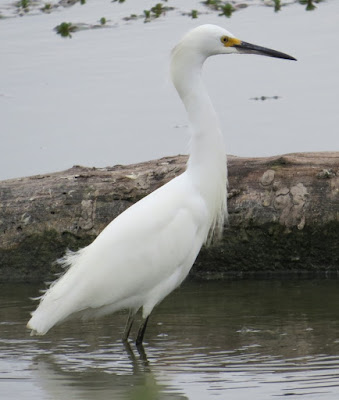 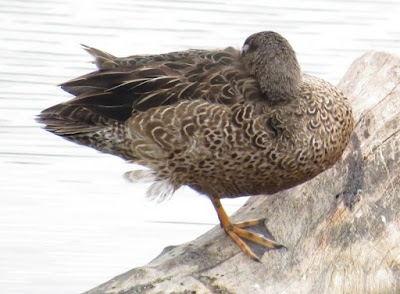 Notice the contrast between the orange toes and gray webs on this Blue-winged Teal! 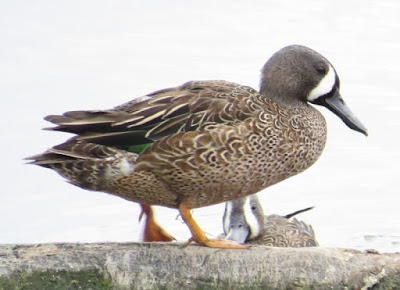 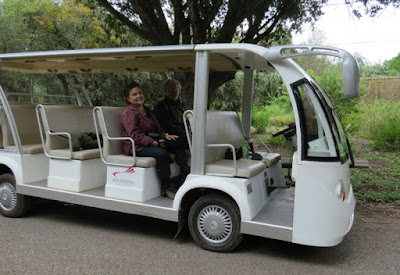 Mako and Dick smile from the tram while Ranger John hides behind it... 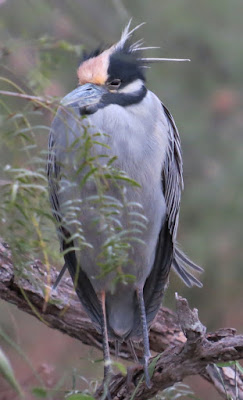 We had to head home after that, but it was a very fun and successful 90-species day!  Bird list: