Clean-up for Dick and Maco

When George and I ran into Dick and Maco at Salineño, they said they were keen to do some clean-up birding the next day, so rather than subject them to another oh dark hundred departure time, we left at the normal 7:00 hour and adjusted our planned itinerary to try and target the birds they still had yet to bag after four days on their own.  We decided to start with the Mountain Plovers on FM 1599 as they were still being reported, and like George and my experience the day before, we were gratified to see other birders already there and looking!  (Ironically it was a trio from Georgia that we had run into at Laredo the day before… J)  The leader of the group did indeed spot the birds, but we all ended up going down the road about a half mile to get them in better light, and they showed even better than the previous two times I had been out there!  The Sandhill Cranes were still coming in, and I heard a distant flock of Snow Geese, but even more exciting for Dick was the American Pipit that flew in and landed right in front of us!  More numerous were the nicely-patterned Horned Larks (or Shore Larks as they call them in the UK).  We then crawled down 1599 in hopes of hearing a Sprague’s Pipit or spotting the geese I had heard, but ended up checking out the little pond where the Birder Patrol had a few shorebirds a couple of weeks previously; the Vermilion Flycatcher and Eastern Phoebe were still there along with a Great Egret, but the only shorebirds were a handful of Long-billed Dowitchers and a flock of Least Sandpipers, all of which flew around and vocalized nicely.  A Tropical Kingbird tittered unseen as well. 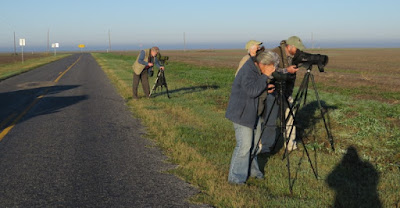 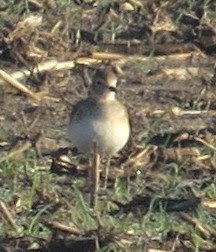 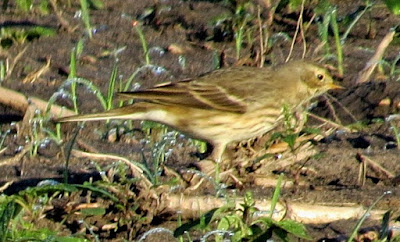 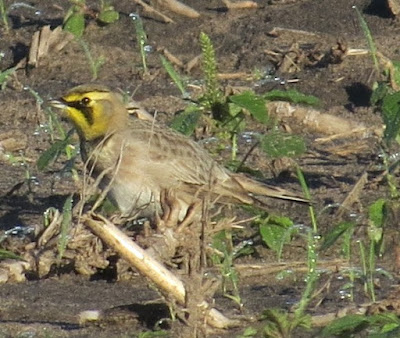 I cringed when they reported that they had dipped on the Olive Sparrow at Salineño, so on a tip from my friend Norma we swung down to Hugh Ramsey Nature Park in Harlingen to try for it, as she said it often came in to the feeder area right there by the parking lot.  Everything but the sparrow came in over about a 15 minute wait (Dick announced to the birds, “Okay, we’re leaving now!” hoping the age-old Murphy’s Law of the bird showing up just when you leave would come into play), so we decided to poke around a short loop, as I had heard a Carolina Wren, which was also a target bird.  As we poked, we managed to kick up the resident Black Phoebe (considered rare in Cameron County, but becoming more common), and at one of the ponds the Carolina Wren miraculously showed itself while a Bewick’s sang in the background (don’t often get those two together)!  While trying to coax out a Curve-billed Thrasher (they had seen one in Arizona but I encouraged them to put this one in the bank, as it may be split down the road) we heard the Olive Sparrow singing (which is odd this time of year), but we never could get it out (same story with what would have been their life Verdin).  At another pond a pair of Green Kingfishers performed well, but what stole show was a knockout Isabella's Heliconian that Maco spotted!  Actually, the whole patch was alive with great butters:  we rescued a Queen that had gotten itself stuck on a very sticky plant, but in addition we saw Long-tailed and Sickle-winged Skippers, Mestras, Snouts, a Laviana White Skipper, and even a Zebra Heliconian! 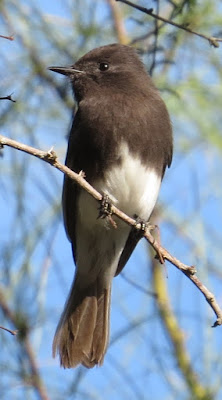 One of the wetlands at Hugh Ramsey 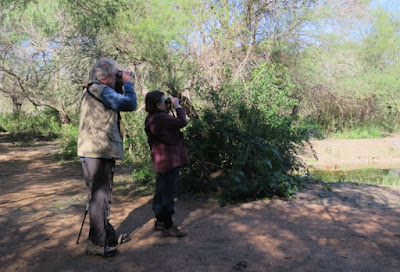 Dick and Maco enjoying the Green Kingfisher (below) 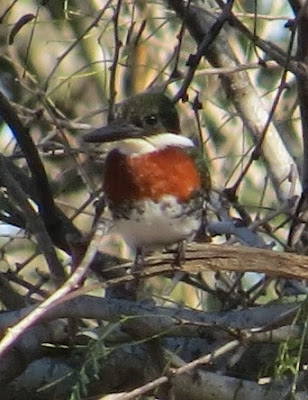 Isabella's Heliconian, a very rare butterfly in the Valley! 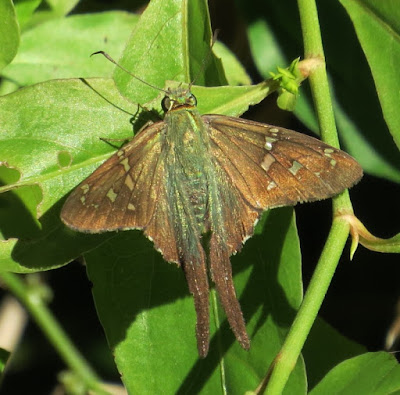 Piping Plover was still high on Dick’s list (thankfully they actually saw and photographed the Clapper Rail on a previous outing), so on the way to South Padre we stopped at the SR100 Resacas for shorebirds, finally seeing some Least Sandpipers that were close enough to see the yellowish legs and adding a few ducks to the day list (along with a Belted Kingfisher).  Stops at the Blue Shack and the Falcon Parking Lot for Aplomados were unsuccessful (although we did have a nice Peregrine up on the crossbar that had us going), so that meant we had to try Boca Chica afterwards.  Once on the Island, thankfully we got to drive right up to the Big Bird Flock on the flats which included both flavors of pelicans, all the expected larids, Dunlin, a few turnstones and Willets, and even a few Marbled Godwits, which was also a life bird!  I was disappointed that the only plovers we were seeing were the Black-bellied (I confided that I thought “Grey Plover” was actually a more appropriate name J) when Dick spotted a distant Piping on a sandbar!  I clapped in glee which sent the whole flock flying… L  (Thankfully they all settled down quickly; they’re used to having revelers drive right through the middle of the flock…) 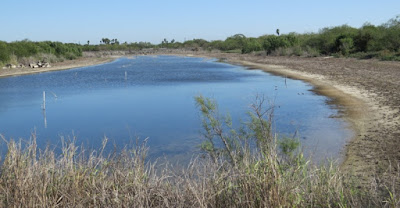 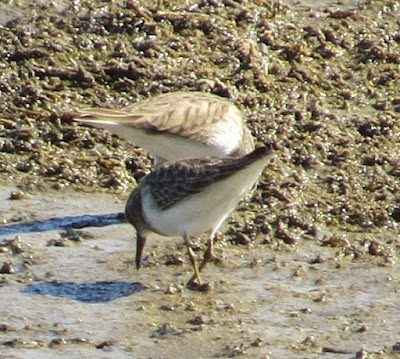 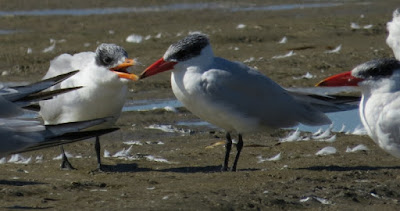 Caspian Terns (with one still begging)

Gulls and skimmers loafing and flying 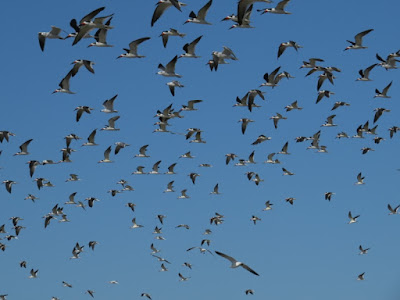 Heading down SR 48 we made fruitless searches of both Boca Chica Blvd. and Old Port Isabel Road for the falcons, so since we were running out of time, we decided to blast out to Valley Nature Center for a crack at the Clay-colored Thrush, which Maco spotted and which gave great looks!  The Olive Sparrow was again elusive, but the Chachalacas entertained us at the feeders!  A Wilson’s Warbler calling in a feeding flock would have also been new for them if the thing had cooperated and showed itself… 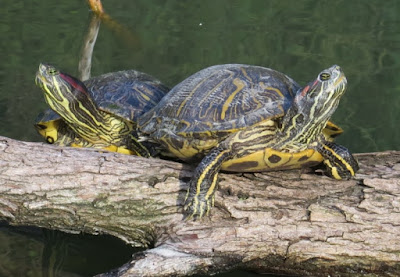 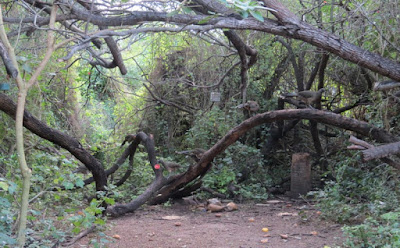 Ended up with 93 species for the day!  Bird List: