Mary and her hubby from Corpus were back in town, this time for a house-building project in one of the colonias, so while Tom worked on the house, Mary and I did some casual birding along the border!  We were concerned about the forecast as thunderstorms were predicted, but it turned out to be a glorious morning:  We started at Bentsen at dawn, and we could hardly hear ourselves think over the cacophony of bird song (granted, mostly grackles and White-winged Doves J)!  As per usual, we didn’t see a whole lot at first, but a nice male Cardinal sat up and sang for us once we were inside the park proper (we had to bust the balloon of a young first time visitor who thought she could drive in), and while White-tipped Doves were “coke-bottling” left and right, one finally sat up in the open for us!  A little further down was a special treat: a rather ratty-looking Groove-billed Ani on a snag!  Mary spotted a Caracara flying ahead of us being chased by something, and here and there a Green Jay would fly across the road.  A small flock of Neotropic Cormorants flew overhead, but Mary missed the single Laughing Gull…  A couple of Yellow-billed Cuckoos sang here and there, and while trying to pish out a Verdin a Turkey gobbled in the distance! 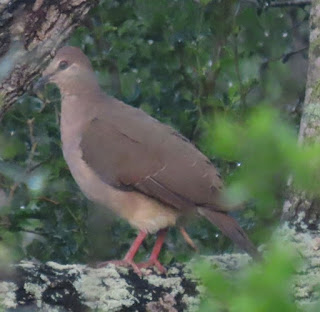 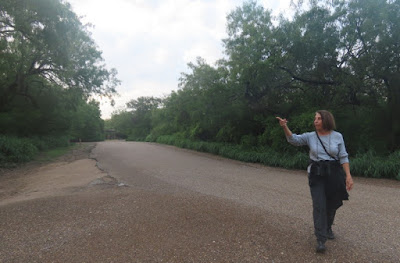 "There goes a Green Jay!" 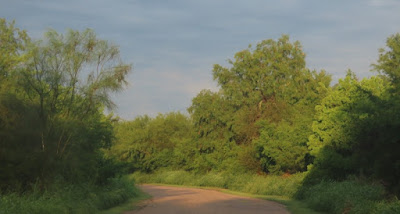 Morning sun on the trees 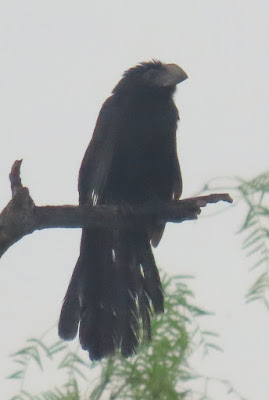 We spent a few minutes at the resaca but didn’t see much except another ani and a Chachalaca perched high above the trees.  A Golden-fronted Woodpecker showed well, and had a ratty-looking pair of Chachalacas preening each other (I think the big rain last night did everyone in)!  But the star of the show was a brilliant Altamira Oriole sitting up in the open and preening away, putting on a great show!  We also had some kind of Orb Weaver along the road, and heard a Painted Bunting singing way back in the brush near the Nature Center on the way back.  With the sun a little higher the Cave Swallows were now flying around the bridge, so we got some good looks at them. 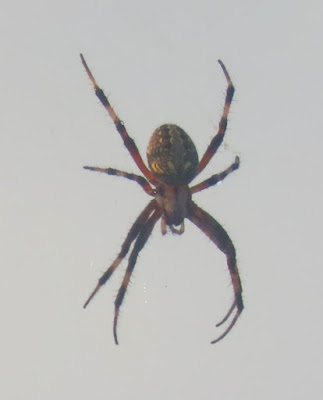 Best guess by the BugGuide experts was Western Spotted Orbweaver! 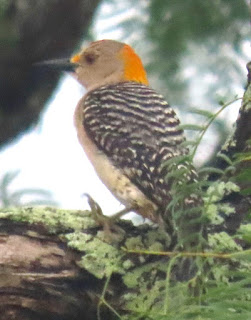 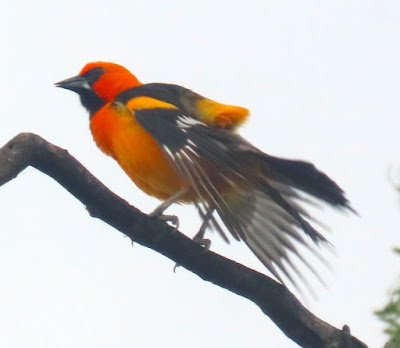 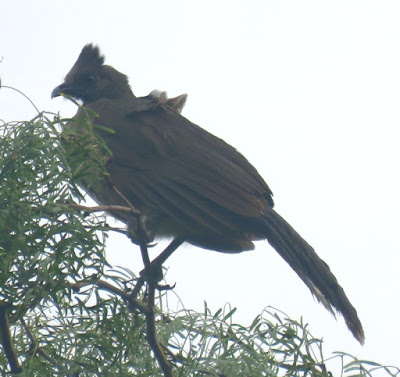 From there the plan was to head to the National Butterfly Center next door for feeder birds, but before we even got there a Ringed Kingfisher flew over the car!  Added a singing Eastern Meadowlark out the window, and a fluttering Bronzed Cowbird almost got nailed by an oncoming car, but as we pulled in to the center, we saw the gate to the back gardens was closed, and for good reason:  with all the heavy rains we’ve been having lately, the flooding’s still pretty pronounced, and the road back there was probably impassable!  So we wheeled around and continued to Anzalduas, adding a Scissor-tailed Flycatcher to the list along Old Military Highway!

Anzalduas was quite productive:  on the way in we had a young male Blue Grosbeak singing on the wire (I thought it was a female until he opened his mouth J), a distant Bobwhite let his presence known, and Dickcissels were singing from the fields but just not visible.  A couple of Great Egrets were in the canal next to the levee, and as we crested said levee I was amazed at the amount of water in the “Pipit Field” – I hadn’t seen it that wet since Hurricane Alex when they had to open the floodgates!  We quickly added Coots and a hooting Pied-billed Grebe as we crossed the spillway, and logged two Snowy Egrets in the field along with all the grackles.  Just before the entrance kiosk a Swainson’s Hawk was hightailing it across the road followed closely by a grackle…

Stopping at my normal spot by the Rio Grande, we scanned the river and enjoyed a Four-spotted Pennant, but then got distracted by the dear-dear-dear of a Beardless Tyrannulet!  So we walked over to the boat ramp, but he quit calling (naturally), so we went back and checked out the rest of the river.  From there we crawled over to the dam where we again got out and finally found a Black Phoebe!  Unfortunately the little trail that leads to the window into the river behind the dam was overgrown, but we still enjoyed the Cliff Swallows and their nests, and an Osprey flew by one of the “windows” between the dam structures.  I felt some sharp zings on my feet and thought I had walked through some of those nasty spiky burrs that like to stick to your socks, but in reality I apparently had dislodged a fire ant nest!  The good news was that I was spared having to perform the “Fire Ant Strip-Tease” I’ve heard so much about, because my pants were stuffed into my socks and the ants were all on the outside (but marching up rapidly)!  Mary helped tremendously in swatting the ones I couldn’t see off my pants (“I don’t wanna swat your butt,” says she; “No!!  Swat it!!” says I… J), but I think the fact that I had sprayed that area beforehand helped, and I came out of my first fire ant experience none the worse for wear… 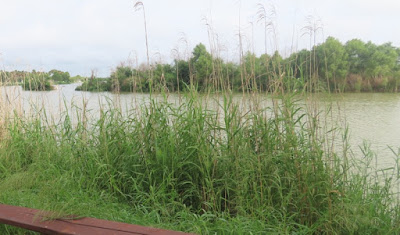 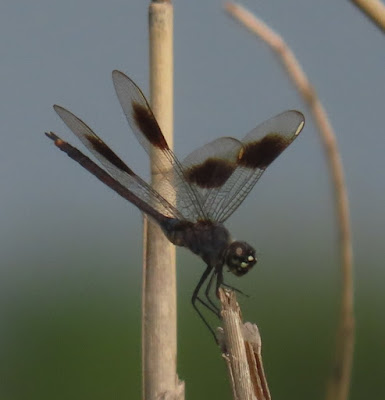 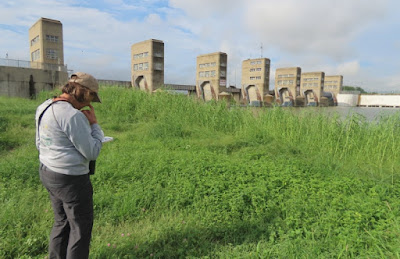 Mary ponders her field guide as we enjoy the Cliff Swallow nests on the dam!

We came down the road by the maintenance buildings looking for House Finches, but instead had a wire-full of fledgling Rough-winged Swallows, one that fluttered his wings and buzzed at another that came up!  They were all dislodged by a Brown-crested Flycatcher (guess he saw the camera and wanted his picture taken, too J)!  After making the turn on that middle road I suddenly heard a WheeK! and pulled over to try for that pesky tyrannulet again!  This time we found him, and he was uncharacteristically cooperative, sitting out in the open and pulling on Spanish Moss!  Then Mary found a second bird, and we strongly suspected they were building a nest!  Mary was thrilled – she said that was the best look she had ever had of that bird! 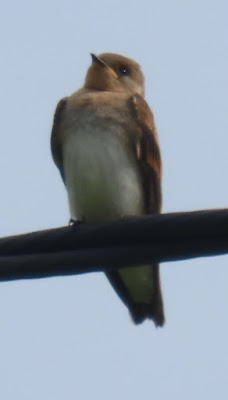 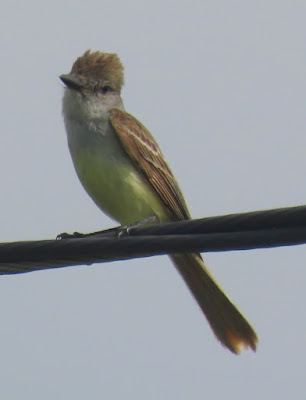 Brown-crested Flycatcher that ran him off... 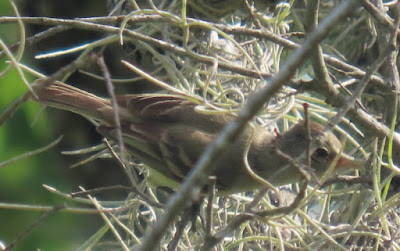 We added a Black-necked Stilt flying over the spillway on the way out, then headed for the next place on the list:  the Old Hidalgo Pumphouse!  As I predicted, we got the Monk Parakeets right along Bridge Street at their nests!  (This was the first nesting site I had seen outside of the “colony” around 5th and Gardenia…)  A Lesser Nighthawk batting low over the buildings was a nice addition, behaving just like the ones that nest on our roofs at the Inn!  This was a spot Mary had never been to before, and she really liked it; we accessed the walking trail by going around the building (I assumed the gate from the garden area would be locked, and it was) and had a pair of cute little Inca Doves right away!  The deck overlooking the channel was pretty quiet except for a Green Heron and a pair of Brown-crested Flycatchers, plus more fly-by Monk Parakeets.  We then went up on the levee and walked westward, seeing as the trail down below was too muddy, and that turned out to be great; we had a wonderful (albeit brief) look at an Olive Sparrow, and a cute little Mexican Ground Squirrel went scurrying down the road in front of us, tail held high!  We got a glimpse of a White-eyed Vireo, while a Black-crested Titmouse flew into a dead tree and posed briefly with some kind of nut in his beak.  A Verdin called (but wouldn’t show), a Ladder-backed Woodpecker sat out in the open, and a presumed male Black-chinned Hummingbird sat on a twig; we couldn’t get any glint of color (even though we both thought something should be refracting at that angle), but Ruby-throated would have gotten flagged at this late date, and Black-chinned is an expected breeder here.  [Update:  It was - the pictures showed a glint of purple!]  On the way back to the car we added an Eastern Cottontail to the mammal list. 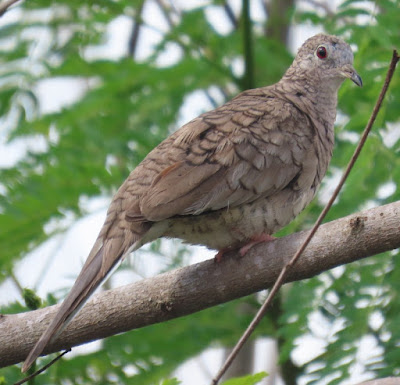 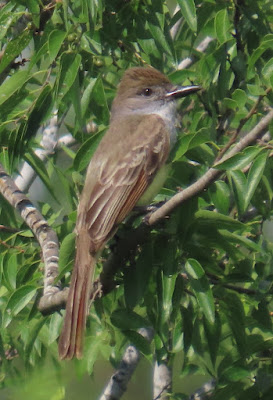 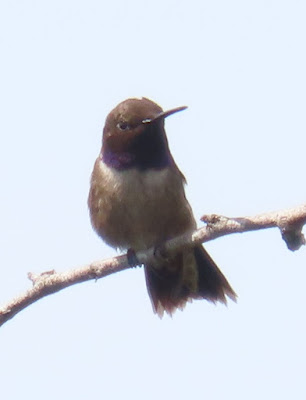 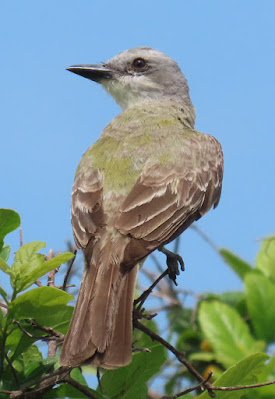 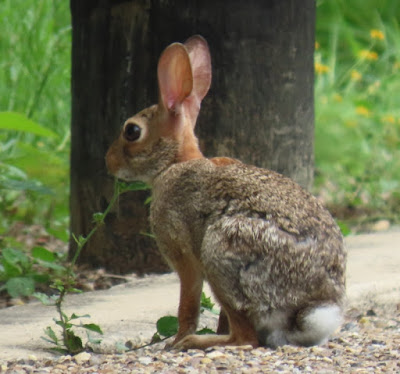 Was time to head home after that with a respectable 64 species for the morning!  Bird list: