A Guide in the Making, Part 1

At 11 years old, Hudson was already an avid eBirder, so his grandparents brought him down to the Valley from the Hill Country for a couple of days to add to his life list (I ribbed them about really needing more than two days… J)  Since they were staying in a new RV park right next to Old Port Isabel Road in Brownsville, I met them there at 6:30 am, and the plan was to go to Sabal Palm Sanctuary to bag those Valley specialties!  Only we were greeted with an unpleasant surprise:  they implemented new summer hours and were only going to be open Friday through Monday!!  Well, we got a Yellowthroat coming in that we didn’t get anywhere else… L

So we decided to head down Boca Chica Boulevard and see what we could see.  Paul had a Subaru Outback, so I ended up driving, which is really preferable when we’re road-birding as I can pull over suddenly if we have to! J  The only downer was all the Space-X traffic, plus something being constructed at my old Aplomado Falcon pulloff place (which is probably why I haven’t been able to find that nesting platform – they probably removed it in light of the future construction…).  I tried a couple of pulloffs down the road, where a nice male Bronzed Cowbird posed, Hudson spotted a flyover Willet, and an Olive Sparrow finally popped up, but the traffic was still too noisy (although during a lull I heard a Bobwhite), so we ended up focusing on Palmito Hill Road. 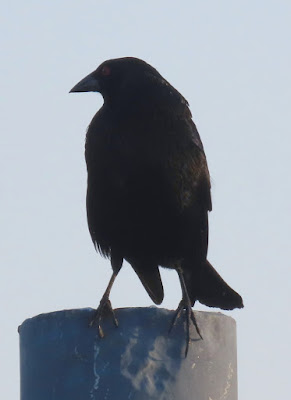 That was really the best move, as the area was very birdy!  On the poles we had Harris’ Hawks and a Caracara, and a Cassin’s Sparrow sat on a post where Hudson could get a great look!  Further down at the cactus patch we finally got a Cactus Wren to show (the wind was starting to pick up), and a Botteri’s Sparrow sat nicely on a dead snag – but right in the sun (good thing he was singing)! L  Eastern Meadowlarks were all over and fooled us more than once into thinking we had something else!  One of the highlights was a couple of young male Blue Grosbeaks sitting in the open, along with a couple of Scissor-tailed Flycatchers!  Another Olive Sparrow sat silhouetted against the sun, but he was singing as well, and thankfully Paul saw the wing stripes on the two Black-bellied Whistling Ducks that flew by!  But at one point I thought I saw a falcon flying overhead, but it turned out to be something even better so far as eBird was concerned:  a late Mississippi Kite! 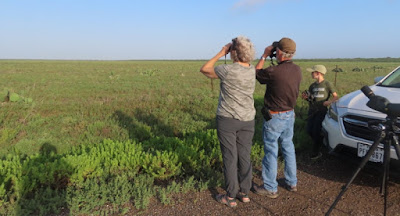 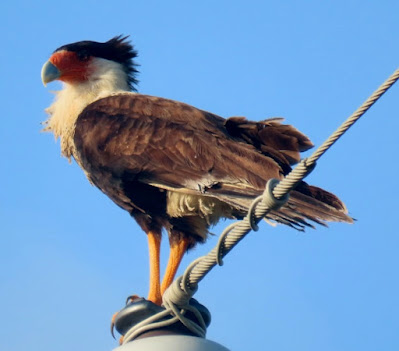 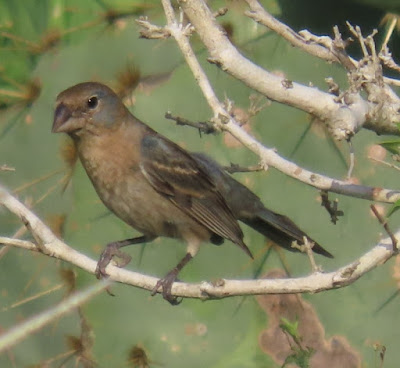 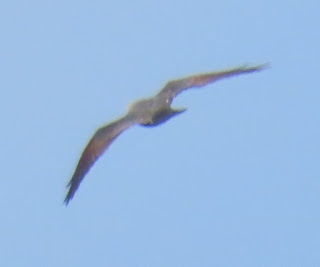 "Proof shots" of the Mississippi Kite 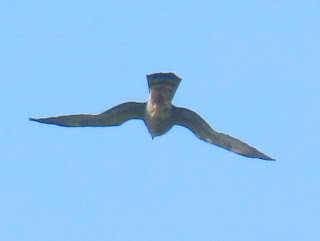 The banded tail show that it's an immature bird.

After making the sharp left, things began to pick up:  two Long-billed Thrashers sang and eventually showed themselves, and a family of Verdins finally came out (at least one of the members)!  At the end of the road (where the residences are) a Common Ground Dove popped up (also a life bird), and a nice male Hooded Oriole posed, which Paul was thrilled about because that was the mystery bird they had seen at Palo Duro Canyon (and that’s real rare up there)!  But as they were oohing and ahing over that, a Groove-billed Ani went blasting through an opening, which was one of Hudson’s target birds!  So after turning around we parked and waited, and eventually he came right out in front of us, giving great looks!  Hudson then spotted a Yellow-billed Cuckoo in the same tree!  On the way out we had a Curve-billed Thrasher that was rather shy when we got the cameras out, plus a Brown-crested Flycatcher that was fairly cooperative, but a White-tailed Hawk sailing across the road put on a great show!

On the back side of Palmito Hill Road 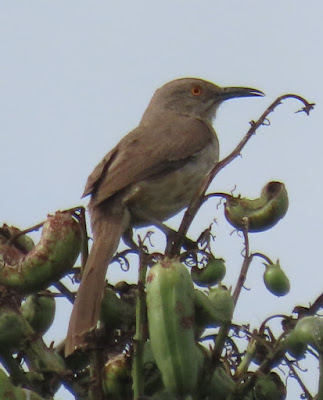 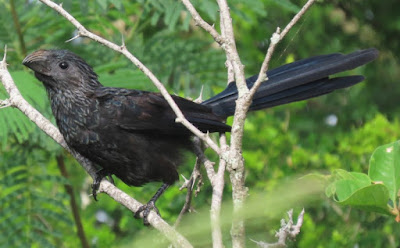 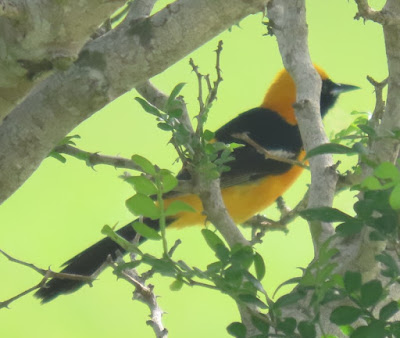 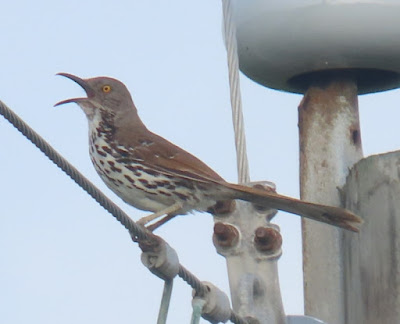 I wanted to try for some water birds down at the flats, and we at least had a couple of Least Terns and a few egrets (no Reddish this time), but I was really discouraged by all the traffic (we even got stuck behind a big crane poking down the road).  I was gratified when Hudson spotted our Wilson’s Plover down by the old Space-X facility closer to the beach; at least he seems to be pretty consistent!  I was wondering if Paul and Karen were gripping the armrests in the back seat as I four-wheeled it through that rough spot at the end of the road that dumps onto the beach (like driving through snow, I said J), but there was nothing on the beach except for two (count ‘em – two) Laughing Gulls, and since I hadn’t planned on going out there I hadn’t checked the tide tables, so I had no idea if the tide was coming in or out, so after a quick look up and down the beach we turned around, tackled the “snow bank” again, and headed out with a couple of pull-overs on the way out to check for falcons (nada), although we did pick up Black Vulture for the day, and a beautiful Osprey powered across the road just before the checkpoint!  A quick stop at Medford Pond (which had a little water in it after the rains) produced nothing but cowbirds, so we called it a day and headed back to the RV park with a modest 48 species for the morning.

(And a word of explanation about the title:  Hudson was a natural at describing exactly where the bird was - an absolute "must have" skill as a guide!  Although a laser pointer helps, too... J)