As Staci put it, most 16-year-olds want a car for their 16th birthday, but Jeremiah wanted a birding trip, so his parents decided to surprise him with a trip to the Valley! J  So even though the feeding had stopped and the specialties would be harder to pin down, I felt Estero Llano Grande State Park would be the place to go for a good variety!  Our nesting Lesser Nighthawks at the Inn were a nice first lifer for the day!

It was very pleasant (and even a little foggy) to start off with; we had Couch’s Kingbirds and flyover Hooded Orioles in the parking lot, and as is often the case, some things were content to sing and not show themselves:  the Long-billed Thrasher sang along the brick walkway and just would not show himself (it’s really much nicer when they sit on the wire J), and the White-tipped Doves sang sadly from the woods.  Lesser Goldfinches were calling but were impossible to pin down, but a Lincoln’s Sparrow deigned to let us watch him hop along the trailside! 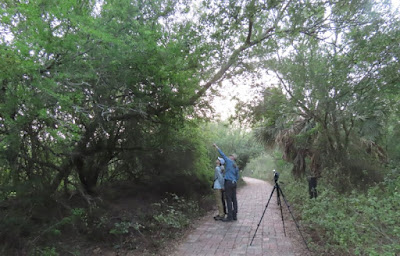 Trying unsuccessfully to find the thrasher...

Once on deck we really started seeing things:  Purple Martins were actually feeding in the grass, and in addition to the Whitewings, the White-tipped Doves were surprisingly coming out in the open!  A perusal of Ibis Pond added a Tricolored Heron, Black-bellied Whistling Ducks, Blue-winged Teal, and a gob of Wilson’s Phalaropes!  A couple of Stilt Sandpipers joined the crowd, and Jeremiah spotted (no pun intended) a Spotted Sandpiper in addition to a little Least near the shore.  A White-faced Ibis fed near the boardwalk, and Black-necked Stilts were here and there.  Heading out on the main trail we dipped on the reported Virginia Rail, but a Sora was very cooperative!  We noticed a blob on the boardwalk that turned out to be a snoozing Stilt Sandpiper… 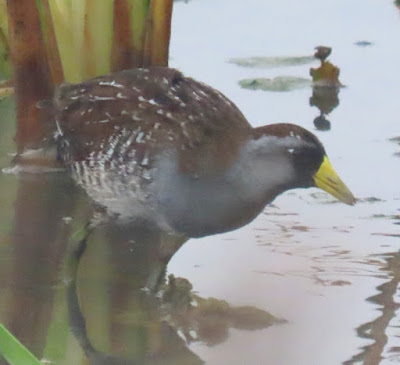 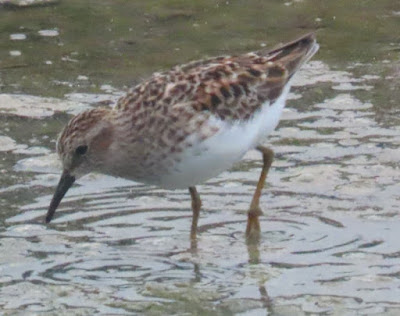 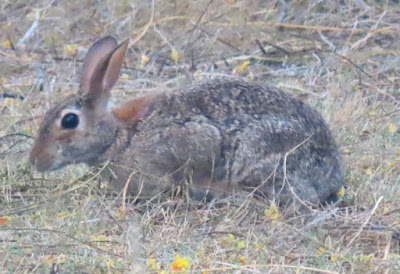 Eastern Cottontail off the deck

Blue-winged Teal with a mob of Wilson's Phalaropes

Heading towards Dowitcher Pond Jeremiah spotted a flyover Caracara that had seen better days, and shortly one that was in better shape flew in and landed briefly in a shaggy tree!  We heard several pairs of chorusing Chachalacas (that made Jeremiah’s list of “funny bird sounds from the Valley” J), and his dad Travis was able to spot the female of a closer pair (the male was clear in another tree)!  That was fun watching her “sing”!  A Brown-crested Flycatcher finally sat in the open, but Dowitcher Pond itself was rather sparse except for Coots and a Great Egret, so we headed on to Grebe Marsh where we had both adult and subadult Yellow-crowned Night Herons (Stacy liked how their filo-plumes wafted in the breeze)!  A Neotropic Cormorant was drying his wings, and from another angle we found several close Least Grebes (that quickly pattered out to the middle of the pond when they realized they had been “discovered”)!  What I was pretty sure was a Great Crested Flycatcher made a brief appearance, but later one made its distinctive call so we could at least count it for the day!  Jeremiah picked up some Cedar Waxwings flying overhead, but Alligator Lake was disappointingly quiet, except for a fly-by Green Heron that Jeremiah was thrilled to see!  Couldn’t locate the Pauraque, and the Screech Owl wasn’t in his hole; we did kick up a few Yellow Warblers and a couple of close cormorants, and an Altamira Oriole sang nicely but only made a brief appearance…  Nothing was at the overlook except a Carolina Wren that sang loudly but wouldn’t show… 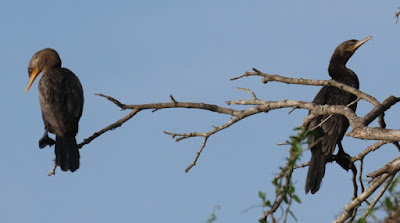 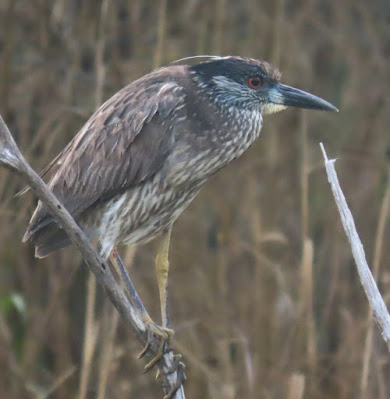 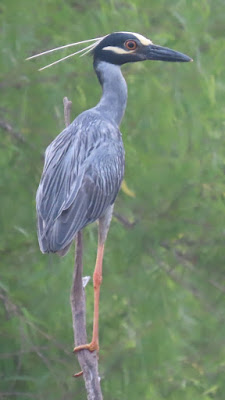 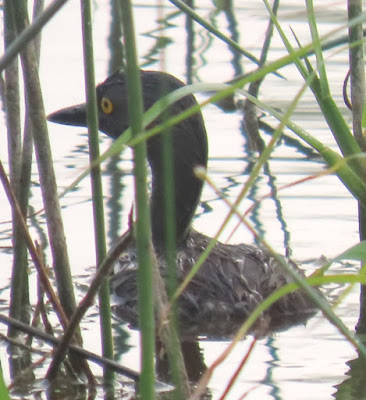 I had heard some Fulvous Whistling Ducks, so we returned to Dowitcher Pond, noting a flyover Dickcissel doing its brat call.  We headed south along the east edge of the pond, and while we were enjoying a Common Gallinule and Pied-billed Grebe, Jeremiah spotted the ducks!  That was very nice!  Another Yellow-crowned Night Heron was in a distant dead tree, and a lady we ran into with a Big Gun was pleased as punch to be told that’s what it was, as it was a life bird for her!  Both an adult and immature Little Blue Heron showed up (Travis noticed that the adult was having trouble eating whatever it was he caught), and Curlew Pond had some nice things such as a Roseate Spoonbill and a Long-billed Dowitcher in breeding plumage (that promptly got chased out of a stilt’s space).  Taking the cutoff trail back towards the Visitor’s Center, a couple of Kiskadees showed off, but the two Yellow-billed Cuckoos were content just to sing…  Avocet Pond had Jeremiah’s first Mottled Duck, along with a pair of Blue-winged Teal.  Once back on deck a quick review of Ibis Pond added more Mottled Ducks and Stilt Sandpipers, but nothing new. 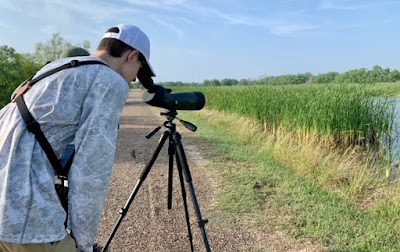 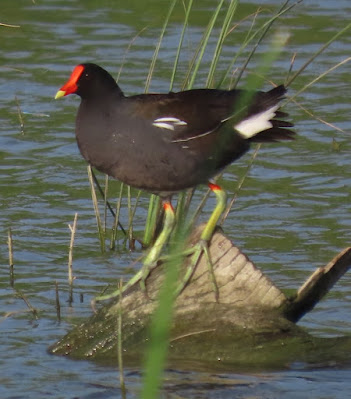 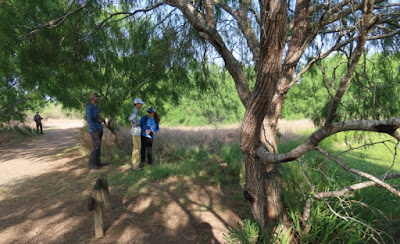 Checking out the birds at Curlew Pond... 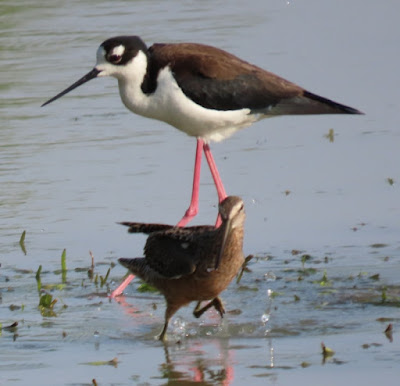 A Long-billed Dowitcher gets out of the way of a Black-necked stilt (also below)! 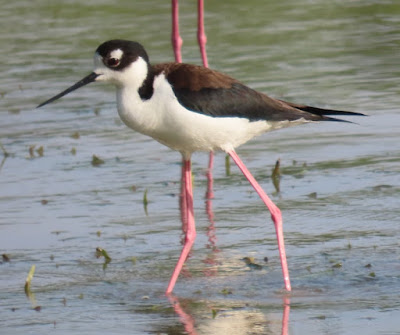 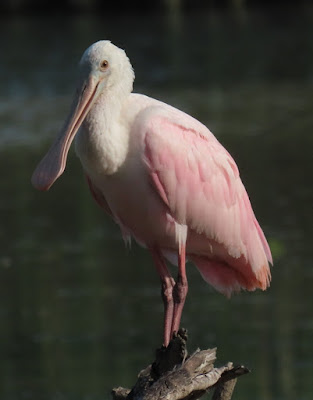 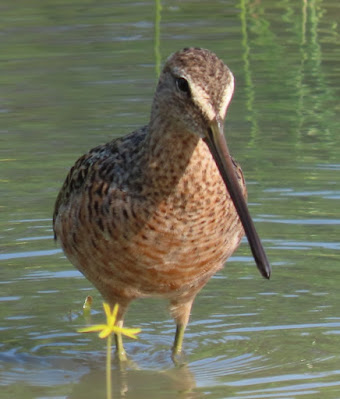 Another view of the dowitcher 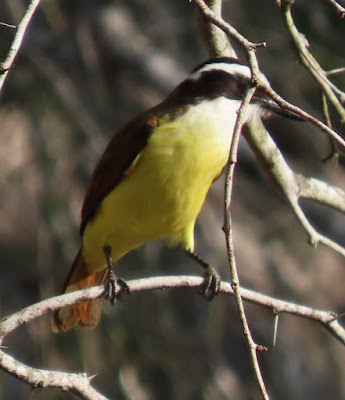 From there we headed to the Tropical Zone, where a Painted Bunting sang in the distance and a Black-crested Titmouse finally came in and showed off his cuteness!  A short sit at the Green Jay Trail Drip added a Catbird and Wilson’s Warbler, but we were distracted by a pair of Green Kingfishers that were ticking up a storm, and as we started on the trail, Staci found one of them up in the tree of all places!  What spotting!  A Least Flycatcher also came out for a look while an Eastern Wood Pewee called in the distance, and a White-eyed Vireo actually came out in the open!  A pair of Cardinals acted as though a little courtship behavior was in the making, but flew off before anything interesting happened…  An Olive Sparrow appeared briefly on the ground next to the trail, but the trogon never showed herself… 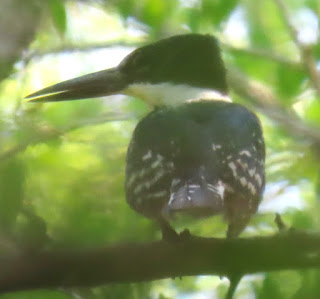 Green Kingfisher through the trees 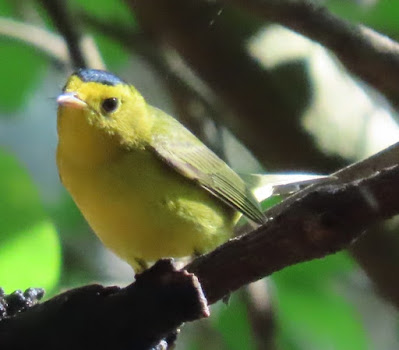 Wilson's Warbler at the drip

From there we headed back to the roads where the baby Great Horned Owls had been hanging out, but we couldn’t find them (a Chachalaca was sitting where the owls had been last week).  A Red-crowned Parrot called way in the distance, a Blue-headed Vireo sang sweetly way up high, and a few Golden-fronted Woodpeckers showed themselves while Ladderbacks laughed in the distance.  A Harris’ Hawk posed nicely in the Norfolk Pine that got fried by the Freeze, and a Clay-colored Thrush called nicely but we couldn’t find him before he flew… 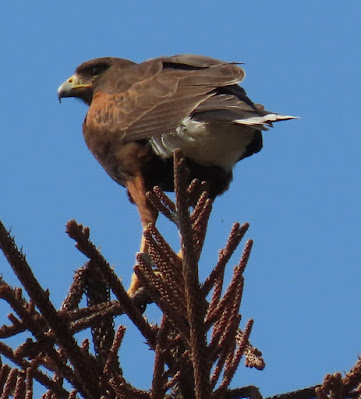 Finally, we spent several minutes in the Indigo Blind hoping some specialty birds would happen by; the Buff-bellied Hummingbird made several trips to the hummer feeder, and White-tipped Doves were being territorial.  Another Clay-colored Thrush came in briefly (described as pretty boring plumage-wise J), and I had to drive home the fact that birders would fly in and crawl on their bellies to see this thing before it became a backyard bird!  Finally Jeremiah’s most-wanted bird, the Green Jay, came swooping in – in fact, they spotted it long before I did as it stopped dead and blended right in like a green and yellow leaf! 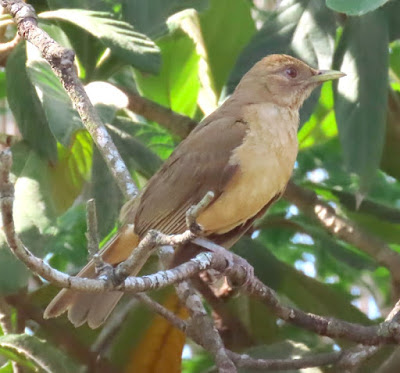 We had to start heading back about then, so we tried for the Pauraque and Screech Owl on the way out (nada), and we did get another brief look at a jay!  But Jeremiah was intrigued by the Brown Anole that was displaying his red gular flap! 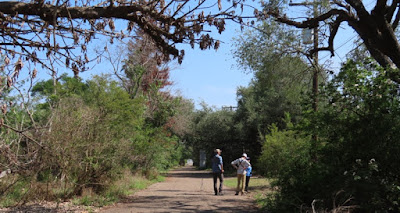 Dragging ourselves back to the car...

There was a heat advisory out already, so I was glad we started at sunrise and got the hot part of the park done first!  The gang almost fainted after I input the eBird list and we ended up with 73 species!