Joyce was a trooper – after multiple harrowing flights from Ventura, California, she and her friend Christine finally arrived in San Antonio late Tuesday night, and even after Keith’s insistence that they spend the night up there, she was determined not to miss our outing this morning and wheeled in to Alamo at 3:00 AM!  So she was kinda floating at first (Christine was the non-birder and was sleeping in J), but her energy returned in spades as we arrived at Estero Llano Grande State Park and started finding life birds right away!  Her main target was the Green Jay, but she also wanted to get a picture of a Cardinal for her nine-year-old grandson (that was his favorite bird J), and wouldn’t you know that was the first bird to greet us on the floor of the parking lot!  A Long-billed Thrasher and Carolina Wren were more stubborn, but as we arrived on deck, Ibis Pond was just stuffed with birds:  close looks at Stilt Sandpipers, dowitchers, Wilson’s Phalaropes, Lesser Yellowlegs, White-faced Ibis, Blue-winged Teal, and Mottled Ducks were the highlights.  I intended to give the “restroom” hummingbird feeder 15 minutes for the Buff-bellied Hummer to come in, and he actually came in right away!  We stayed a little longer in hopes that he would come back for a better look, but while he never did, a young male Ruby-throated Hummingbird did come in, showing a few red feathers on his gorget! 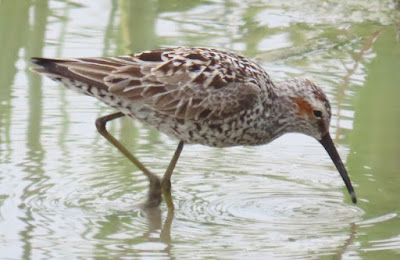 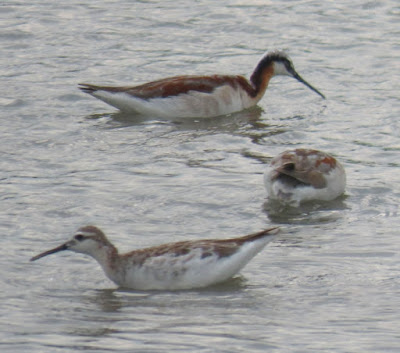 Wilson's Phalaropes (female above, non-breeding below)

From there we headed to Dowitcher Pond, which was pretty birdless except for some Coots, a Common Gallinule, and a distant Pied-billed Grebe.  We were apparently having too good of a time yapping as a Sora whinnied annoyedly next to us! J  The wind was starting to whip up so we didn’t have high hopes of songbirds, although a nice male Ladder-backed Woodpecker came bouncing in and gave good looks!  In Grebe Marsh we had two gorgeous Yellow-crowned Night Herons posing (the Great Egret was anticlimactic), and had a nice view of a Neotropic Cormorant.  At Alligator Lake a fuzzy-headed Anhinga posed while some grackles gave him fits (Joyce thought that was a pretty cool bird J).  We looked in vain for the Pauraque and Screech Owl (park volunteer Huck told us the former was in there, but deep and hard to find), and while resting at the picnic shelter a Carolina Wren almost came out to give us look! 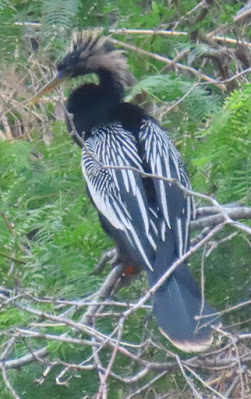 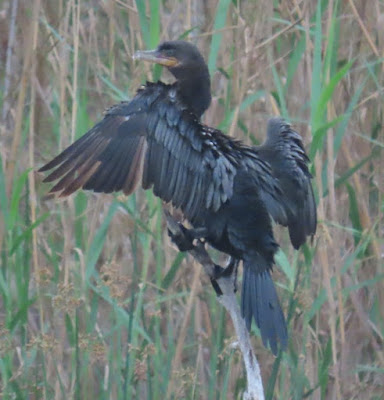 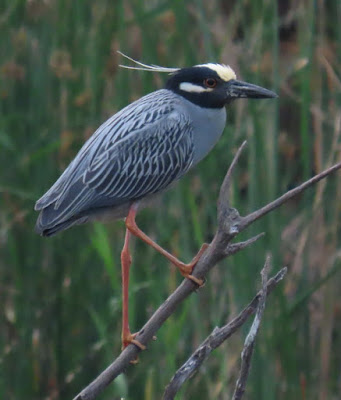 Heading back we took the boardwalk across Dowitcher Pond in hopes of seeing the Least Grebes we were hearing, but they were too deep in the reeds; we did have some nice Black-necked Stilts, however, and circling around Curlew Pond a Kiskadee sat pretty and actually escorted us down the trail!  At Avocet Pond, we had three Roseate Spoonbills that were a hit, plus a Little Blue Heron!  A Common Ground Dove went zipping by too fast for Joyce to catch L, and a quick rehash of Ibis Pond only added a Least Sandpiper, so we headed for the Tropical Zone.  Coming down the brick walkway the Long-billed Thrasher finally let us get a look, and a Chachalaca stepped daintily down the path as well!  Joyce nearly fell over backwards trying to spot the Chimney Swift flying overhead! 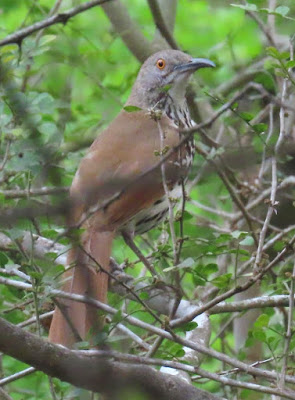 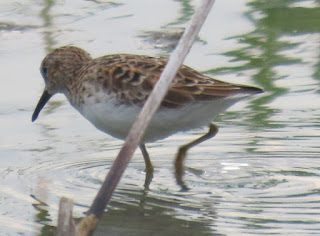 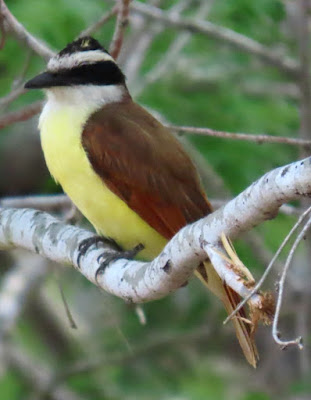 We ran into Huck as we made our way to Green Jay Trail; the drip had been repaired, but a 15-minute vigil only added a pair of Cardinals doing some courtship feeding, and a couple of White-tipped Doves (which was still new for Joyce).  Huck had gone looking for the trogon and couldn’t find her (and having not been reported for a couple of days, that prospect didn’t look good), but since Green Jay Trail was sheltered from the wind we hiked that anyway, hearing both Olive Sparrow and Altamira Oriole, but never getting a look… L  We then headed on the “new” woodland trail where we bagged great looks at a pair of Clay-colored Thrushes, plus a Catbird that went zipping through, and a Swainson’s Thrush that was actually singing a little! 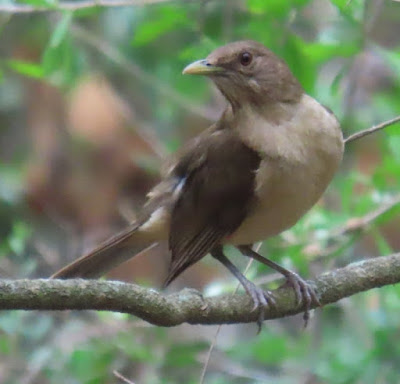 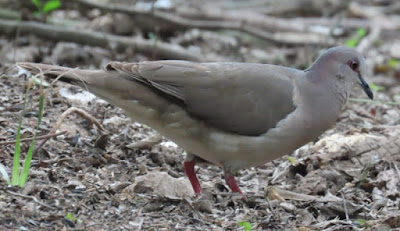 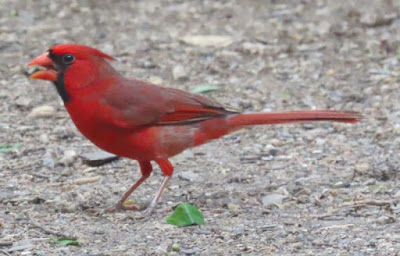 From there we made our way to the Indigo Blind, taking a quick detour to look for that Pauraque, which we never found (he apparently was moving around a lot, according to Huck).  A pair of Black-bellied Whistling Ducks watched us from the road in the meantime!  I knew the park staff had quit filling the feeders, but I thought maybe we had a chance at the Green Jays coming in to the water feature, so we gave it 15 minutes.  We noticed that the hummingbird feeders were also gone (Huck assured us they were only being cleaned), but that didn’t stop both the Buffbellies and the Rubythroats from looking for them!  Eventually a Chachalaca came in to drink, and a couple of White-tipped Doves ventured in, but after a bit of waiting the Green Jays finally came in and gave great (if brief) views!  Joyce was so excited!  Huck showed up again about that time, as did birding buddy Ken, and that’s when I found out that “woodland trail” was really not an official trail, but one that had been blazed “illegally” (which surprised me as it was actually in good shape)! 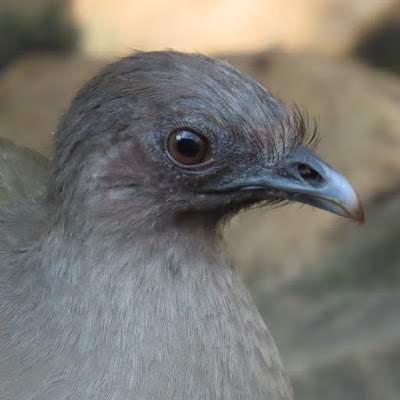 After a few more minutes with no return visit by the jays, Huck offered to show us the baby Great Horned Owls, which was, as he put it, “Cuteness Overload!” J  Even Ken admitted that was the best look he had ever had of them!  There was also a Black-crested Titmouse that didn’t wanna play ball, but I encouraged Joyce and Christine to visit the National Butterfly Center where they do feed the birds all year round, and she’d get great looks at that as well as her beloved Green Jay!  On the way out Ken and I looked for the staked out Screech Owl in vain, but managed a nice look at a vocal Couch’s Kingbird back in the parking lot! 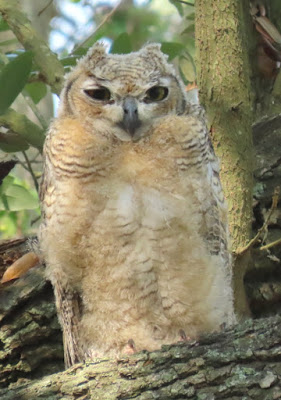 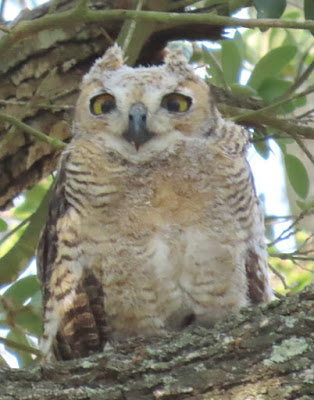 Despite the wind, we managed a respectable 54 species for the morning!  Bird list: