In Search of the Perfect Picture, Part 1

Slava and Lori had joined us on a Birder Patrol trip years ago, so now they were back, and Slava, originally from Russia and being a serious photographer, had a definite target list of birds of which he wanted to obtain “perfect photographs”!  Certainly couldn’t guarantee that J, but I knew we’d have a more than decent chance to bag one of the “high priority” birds on his list, the Audubon’s Oriole, at the famous Salineño feeders, so that was our first destination!


Actually, Slava confessed that he had made a dry run there the night before when they drove in from Corpus Christi just to case the place for photography purposes, and he assured me that it passed the test! J  After a quick stop at Starbucks, we headed up, picking up a few “road raptors” on the way and a pair of Pyrrhuloxias along the Salineño road.  It was still overcast as a mild cold front had moved through the day before, but the birds were coming fast and furious:  besides the ubiquitous grackles and redwings were Green Jays, Kiskadees, Cardinals, Chachalacas, and even a normally furtive Long-billed Thrasher came out into view several times!  The Altamira Oriole came in several times, and the party was often broken up by a Green Jay sounding the alarm, but on one occasion a real live Sharp-shinned Hawk came in and shook things up!  (Slava, after a lot of maneuvering, was even able to get a decent photograph!)  With the exception of a single White-winged Dove, I was surprised that the only doves to come in were the Eurasian Collareds (they’re fairly recent newcomers to the feeders).  A Roadrunner rattled unseen, and another lady visiting from New Mexico spotted an Olive Sparrow that the rest of us missed.  A Zone-tailed Hawk made several low passes overhead while a Black Vulture batted by behind the trees, and eventually both Ladder-backed and Golden-fronted Woodpeckers came in.  When Merle went in to get himself a bowl of cereal, it wasn’t too long after that that I heard the characteristic shack shack and sad whistle, and before long here came Baldy to get his own breakfast!  (To new readers:  “Baldy” is the Audubon’s Oriole with a couple of screwy head feathers who’s been coming in for the last five years…)  Mrs. Baldy also came in to take a bath, but I think they both left before Merle came back out again; he said that his leaving the premises was apparently a new strategy to lure them in J! 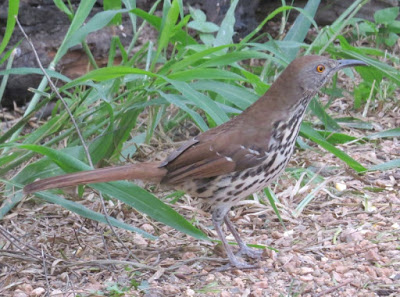 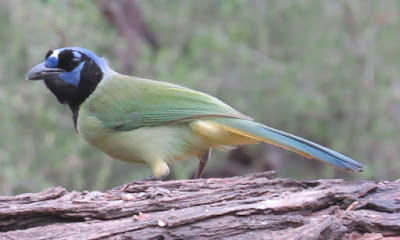 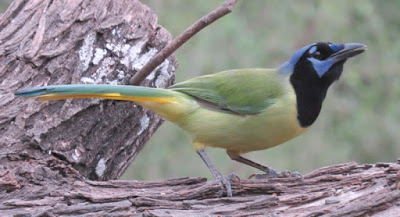 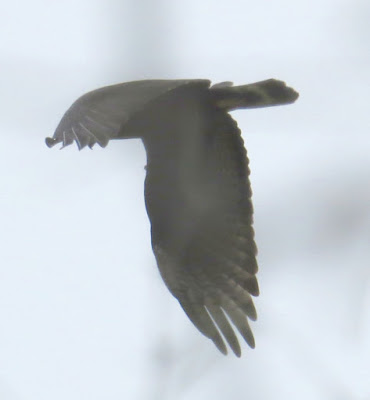 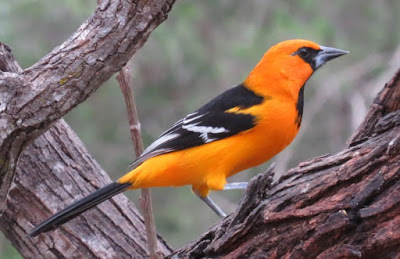 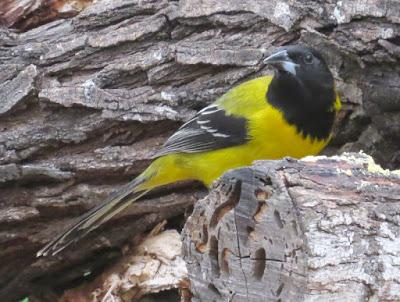 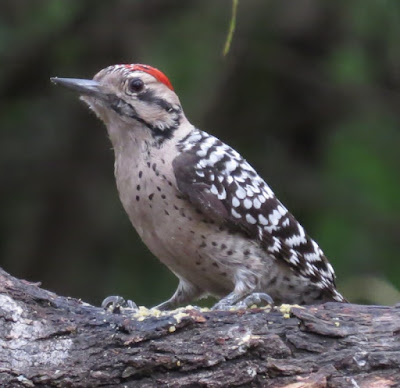 
Having gotten that target, Slava was ready to try for the Mexican Duck along the river, so down we went (both the lady from NM and Bob Powell from north Texas had already gone down there to try for the seedeater).  The resident Osprey was on his favorite pole with a huge fish, and Bob had already set up his chair at the trailhead just to sit and wait, but we headed on to the cul-de-sac.  Slava was excited about the prospect of getting a new species in the Morelet’s Seedeater, but his balloon was greatly busted after finding out that Morelet’s was the old White-collared Seedeater (“When did that happen?!”), as he had tons of photos from Costa Rica!


We passed Mike who had seen the seedeater pair at the culvert, but when we got there, the lady from NM hadn’t seen them (Mike reported they had flown across to the island).  I did shortly hear the characteristic tew coming from said island, so we could at least log it as a “heard-only”, along with an unseen singing Black Phoebe, while a Vermilion Flycatcher fed across the way in Mexico.  A group of Shovelers wheeled in, followed by a Snowy Egret, an American Pipit, and a few Least Sandpipers, while a Gray Hawk whistled in the distance.  A Belted Kingfisher made a brief appearance while a Green Kingfisher spent a little more time on the rocks, long enough for some photos!  But suddenly Slava had some ducks beating a hasty retreat behind the island, and not being as contrasting in coloration as I would expect a Mottled to be, I felt reasonably comfortable calling them Mexicans (although I would have felt better if I could have seen the white speculum border in flight…)  But he got his photo! 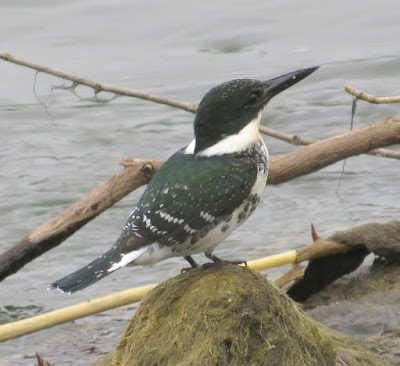 Heading back we had a little feeding flock consisting of titmice, Orange-crowned Warblers, and a Blue-gray Gnatcatcher (Slava was hoping for a Black-tailed), then we checked the bird-life at the boat ramp:  three Double-crested Cormorants posed with a single Neotropic, and there was a nice lineup of waders with a Great Blue Heron, Snowy Egret, and presumed White-faced Ibis all together!  But I took a bunch of pictures of the ibis just to be sure, and the face sure looked good for a Glossy: blue-gray with a thin white border on top, with a dark eye!  First year birds can be problematic as they both show a blue-gray face and their eye color doesn’t change until February, so I figured the final verdict would be out, but I later saw that the eBird reviewer had confirmed my sighting, so Glossy it was! 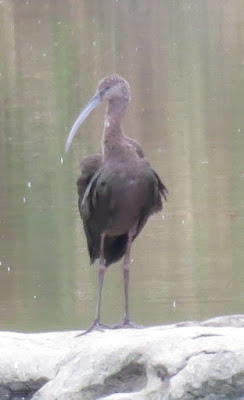 Glossy Ibis, rare at any time in the Valley but especially so in Starr County! 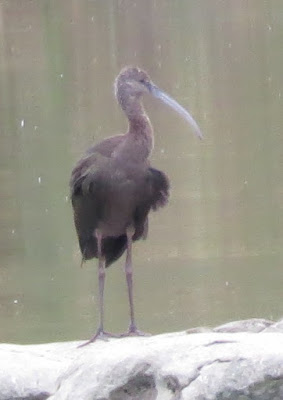 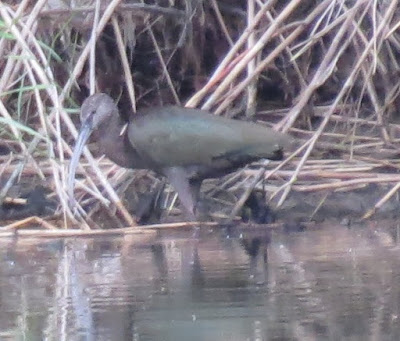 They show a dark gray face with thin white borders, and a dark eye; the more expected White-faced has a pink face with a red eye.

Slava wanted to spend a few more minutes at the feeders, which we did, but food was calling us, so we eventually headed into Rio Grande City for lunch, picking up a lovely White-tailed Hawk on the way (Merle was afraid no place would be open on Thanksgiving, and indeed we were about the only patrons at the Burger King)!  After discussing everything from matters of faith to Sprague’s Pipits J, we eventually found our way to Roselawn Cemetery with the help of Ciri, and began our search for the Plumbeous Vireo.  We started right away trying to nail down a calling Summer Tanager, but about then Slava realized he had left his backpack at Salineño! L About that time all these voice mails and messages came through (after going through several “No Service” spots), as Lois had been desperately trying to get ahold of me to “Come back!  You left your backpack!”  So Slava suggested I drop them off at the Inn where he could jump in his truck and drive back upriver (and Lori could get a nap in J), so we did so, settling on our pickup time for the next day.  He wasn’t too disappointed:  he figured he might get a better shot at that Mexican Duck! 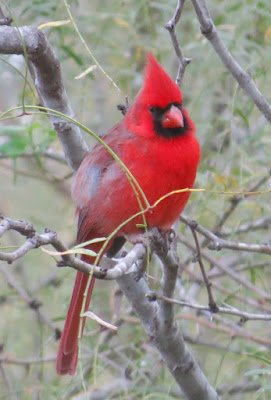 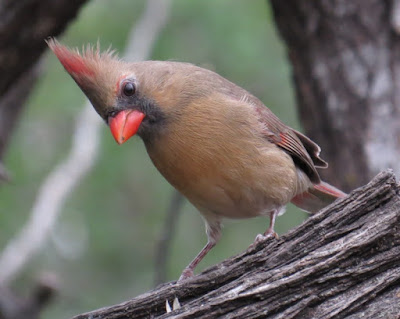 We ended up with 53 species for the day, which is about average for Starr County.  Bird list: