Douglas (nicknamed “Keys” for his skill as a pianist) and Judith had a specific target list of “troublesome birds” that they wanted help with, so the original plan was to head to Santa Ana to try for the Beardless Tyrannulet and Olive Sparrow, in addition to some grassland sparrows out along the Pintail Lake Trail, but the misty weather and muddy trails precluded that idea (and thankfully they had already bagged the Olive Sparrow at Hugh Ramsey), so we headed straight to our planned second destination:  Brushline Road!  We ended up spending the whole day there, starting at the intersection of Brushline and FM 490, and this time we really didn’t even make it to the immediate turn before being inundated with birds!  A female Ladder-backed Woodpecker was right outside the car, and the trees had feeding flocks consisting of the usual Orange-crowned and Yellow-rumped Warblers, Ruby-crowned Kinglets, and Blue-gray Gnatcatchers!  Once we made the turn a flock of Savannah Sparrows played hard to get in the bushes. 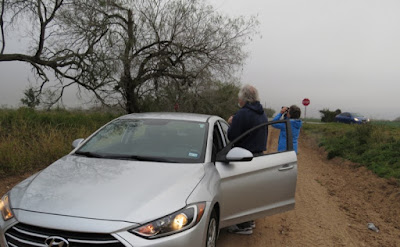 Keys and Judith at the turnoff to Brushline Road 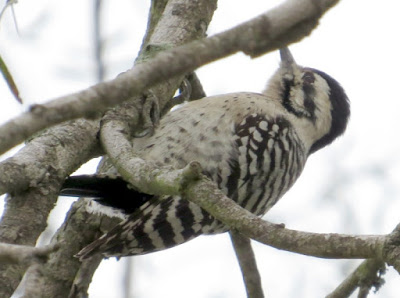 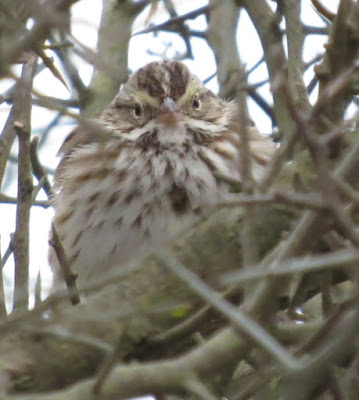 
Continuing north, there were lots of Red-tailed Hawks on the posts, but the real treat was tons of Sandhill Cranes, both in the fields and flying overhead!  At another stop a Least Flycatcher whitted and what initially looked like a flyover cormorant turned out to be a lone White-fronted Goose!  We got to teasing Judith as so many of the birds she was calling to our attention turned out to be Mourning Doves (MODOs), but when I called out a distant Kestrel I heard a “dang” from the back seat:  she thought that was what it was but was afraid to say anything for fear it was just another MODO!  J 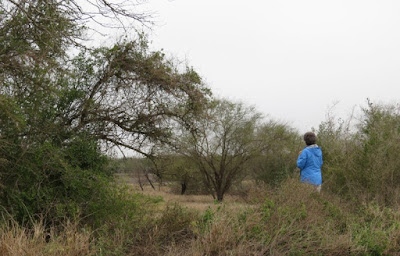 Judith checks out the habitat next to the road.

Keys and Judith on Brushline

The big pond was rapidly drying up, but several Avocets were swishing about, and a flock of American Pipits came wheeling in and proceeded to bathe near the south edge!  Judith discovered a covey of Bobwhite making their way through the flowers that were just on the other side of the fence (too fast for the camera), and in the plowed fields we had fun trying to pick out the Lark and Savannah Sparrows as they went up and down the furrows!  But the stars of the show for my charges were two target raptors (although very distant): Caracara and White-tailed Hawk!  Just before SR 186 was the best sighting (so far as I was concerned): in with two Black Vultures was a big ol’ Wood Stork!  (Exciting only in that they’re supposed to be long gone by now…) 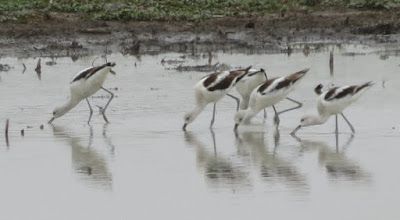 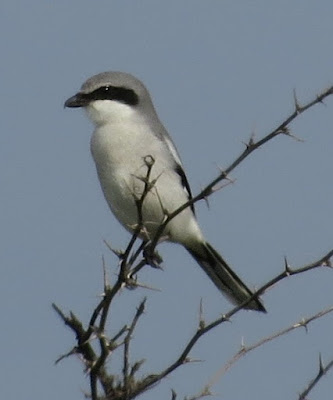 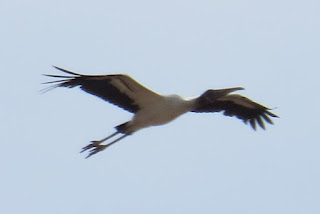 North of the highway a male Vermilion Flycatcher was very cooperative for pictures (he wasn’t even fazed by the big truck that went by), and we finally got a look at a calling Couch’s Kingbird.  Common Ground Doves were more numerous than I’ve ever seen them, as were Roadrunners – we must have had well over 20 during the course of the route, most being very cooperative!  Making the right turn on eastbound Brushline yielded lots of Pyrrhuloxias, more hawks (including Harris’), an uncooperative Black-throated Sparrow, and several lines of ducks flying overhead making an incredible wing noise!  Once we got up to the farm pond we logged several species (interestingly we were able to pick out Pintail and American Wigeon in the flyover flocks, but neither landed on the pond), along with grebes, Common Gallinule, and a growling Anhinga.  Comedy relief was provided by the rancher’s pet Emu that came by to say hello (quite literally, as he drummed deep in his chest)!  On the way out we had a fabulous look at a flyover White-tailed Hawk, and heading down to Ken Baker Keys got his wish: another covey of Bobwhite was right by the road, showing beautifully for pictures, mainly due to the fact that half the covey was still on the other side of the road, and what I assume was the “leader” was waiting until all his ladies made it safely across before diving into the brush himself! 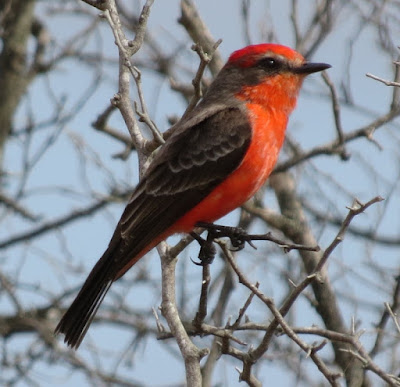 Several shots of the Vermilion Flycatcher 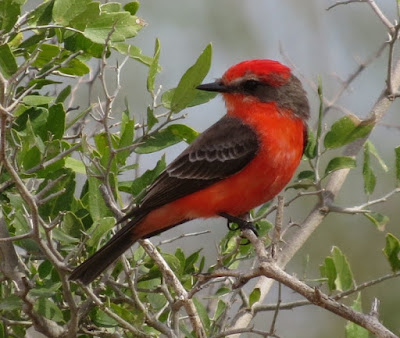 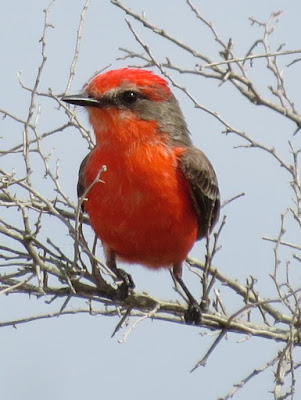 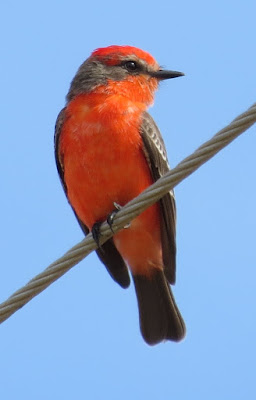 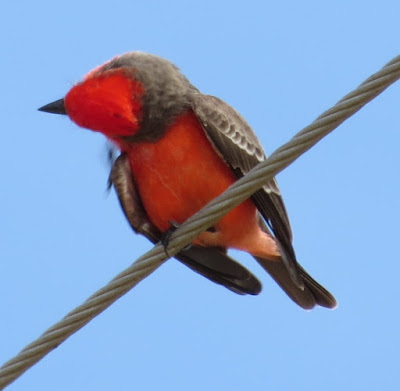 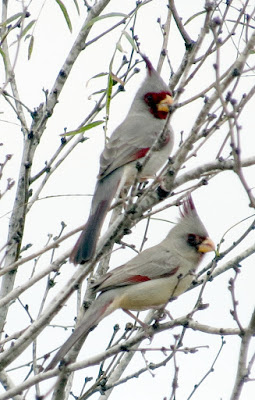 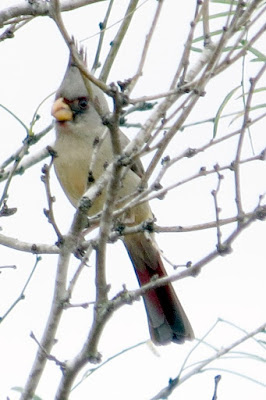 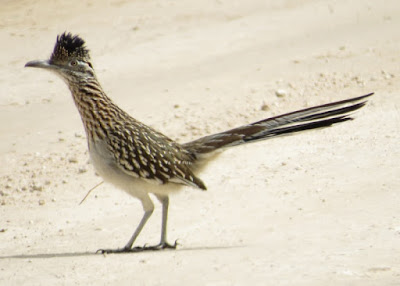 Roadrunner (one of several) 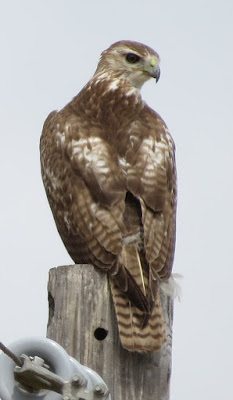 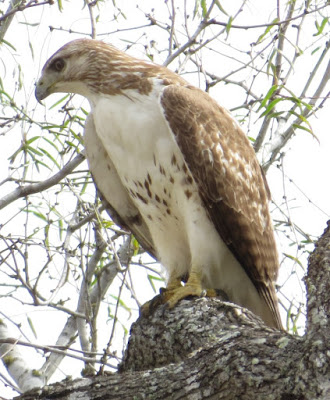 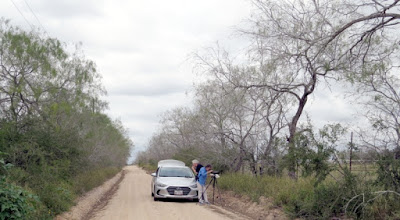 Ken Baker had more Pyrrhuloxias getting gravel from the road, and the little bog near Rio Beef had lots of Brewer’s Blackbirds, mostly females with only a couple of males.  We drove up the entrance road on the off chance that we might kick up a Say’s Phoebe or sparrow (or even the Snow Geese we were hearing behind the feedlot), but that turned out a bust.  But continuing east on Ken Baker we hit pay dirt as several Lark Sparrows graced the fence line, but also single Clay-colored and Vesper Sparrows!  Unfortunately the Cassin’s wouldn’t play ball anywhere along the route, but a Bewick’s Wren got in our faces instead!  A Curve-billed Thrasher also showed nicely along the fence, and along Jesus Maria a Northern Harrier on the ground gave flight and showed off its white rump. 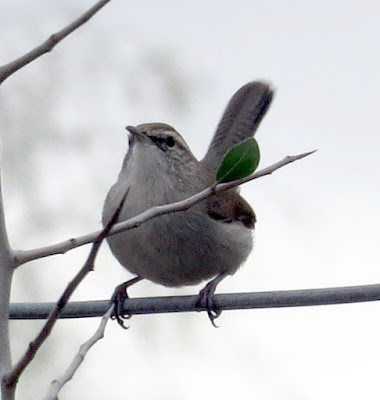 About that time we had to head back, but got great looks at another Caracara along Rio Beef (while trying to stay ahead of a Mac truck J), and a herd of Turkeys blocked the road close to 186.  But the excitement wasn’t over:  Keys had been hoping for a Scissor-tailed Flycatcher all day, and after warning him that they were tough this time of year, I think we had pretty much given up when a beautiful male shot off a power line and did a wonderful lap over the road, showing off that gorgeous tail!  What a great last bird!