A Revisit to the Valley

Craig and Sandy from Tennessee were spending extended time in South Texas and had never had a private guiding experience, so they contacted me and we planned a day together!  They had visited the area about ten years ago during a Texas Ornithological Society (TOS) meeting, but wanted to revisit the birds; since the only target I could weasel out of them was a Pauraque, the first stop was definitely Estero Llano Grande!


We headed over in pea soup fog, but at least it was calm!  We headed into the Tropical Zone, getting the common wintering stuff right away, and an Altamira Oriole choiped and whistled from the top of a tree.  We got scope looks at a Ladder-backed Woodpecker, then we eventually made our way down to the feeders where the White-tipped Doves and the Green Jays were already hogging the place!  We sat and watched for about 15 minutes, enjoying a titmouse and an Orange-crowned Warbler, but I heard an odd call that I couldn’t place, so I went to try and track that down.  I did manage to spot a Black-and-white Warbler, but while I was gone a Long-billed Thrasher showed itself to my charges, along with a Chachalaca! 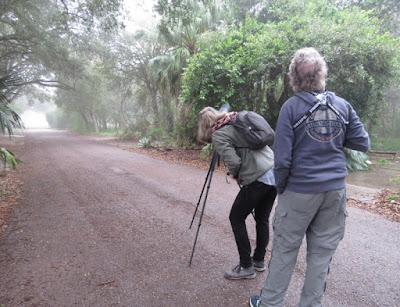 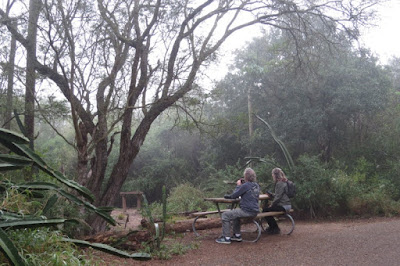 Enjoying a White-tipped Dove (below) at the feeders 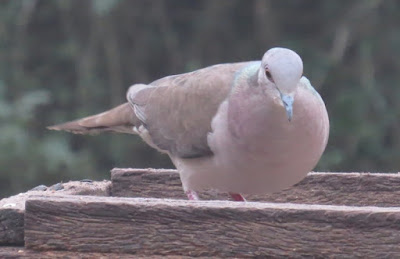 A sit at the drip didn’t bring in anything, so we headed to the Indigo Blind, where a Golden-fronted Woodpecker, a Mockingbird, and a Green Jay were all facing off at the tray feeder!  What struck me as a Black-chinned Hummingbird was visiting the back hummer feeder, but what also visited was both members of the wintering Hooded Oriole pair!  After the Redwings invaded we looped around enjoying the exotic blooming cactus, and back out the entrance road, where I thought I heard the wee-see-wee-see-wee-see of the Black-and-white Warbler, but when the culprit showed himself it was just another titmouse! L 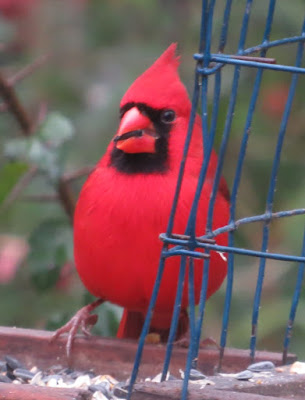 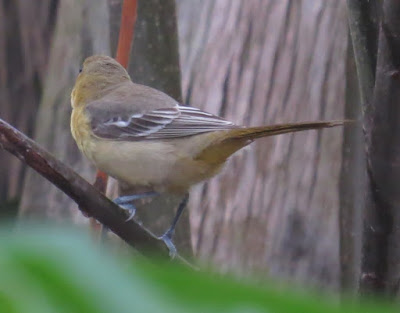 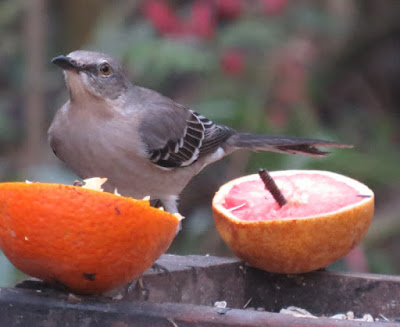 A Mockingbird claims the feeding tray... 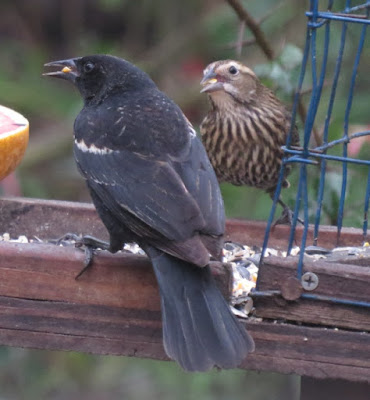 ...along with a pair of Red-winged Blackbirds! 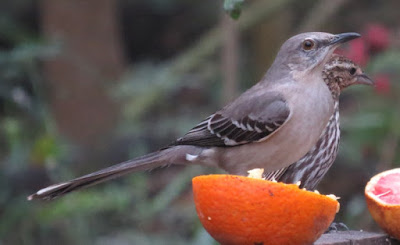 The female Redwing joins the Mocker... 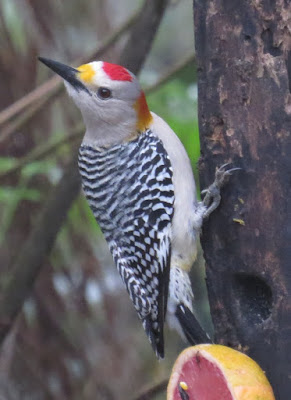 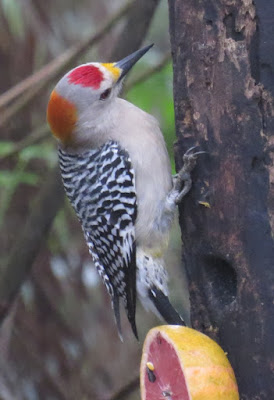 It was hard hitting either the restroom or the visitor’s center to check in, as we were enjoying all the ducks in the fog:  Shovelers, Green- and Blue-winged Teal, and several Black-necked Stilts entertained!  A guy with a monster camera spotted two male Cinnamon Teal and pointed them out to us, but we looked in vain for the rails. L  We thankfully had both Tropical and Couch’s Kingbirds calling along the trail, but Dowitcher Pond was pretty quiet as well (except for a Blue-headed Vireo in a nearby tree).  Grebe Marsh had all the action as a female Green Kingfisher whizzed in and landed on a snag for scope views!  A Least Grebe was pretty close as well, but the Hooded Merganser had se fued the joint.  Swallows were all over, including the returning Purple Martins and the chortling Cave Swallows. 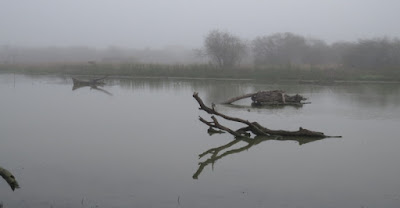 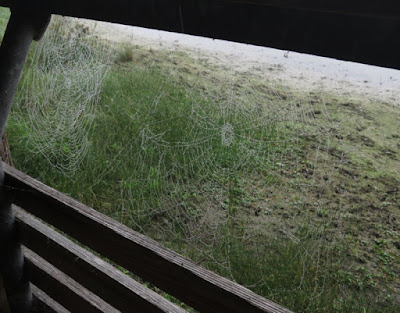 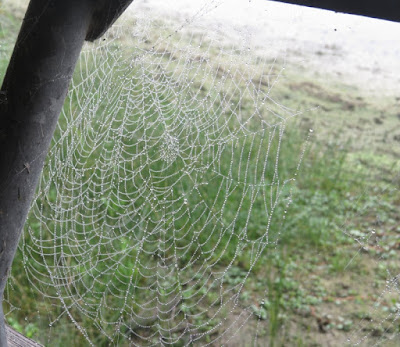 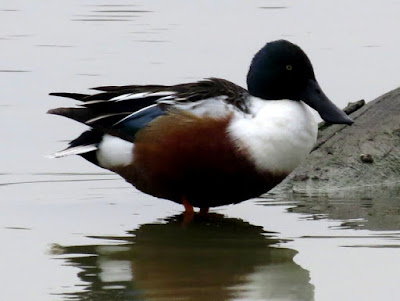 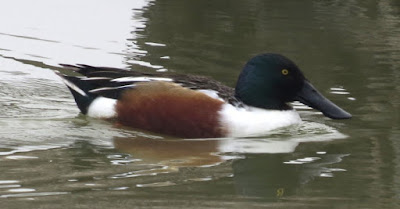 Craig shoots some Cinnamon Teal (below) 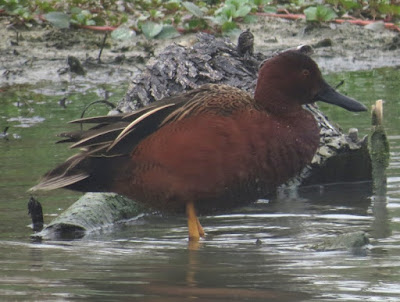 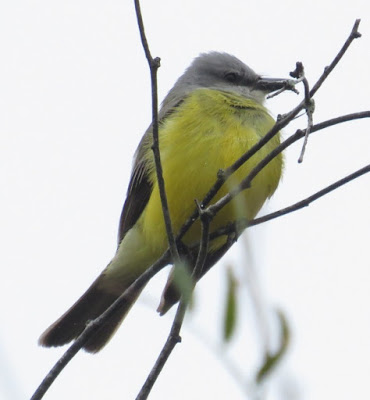 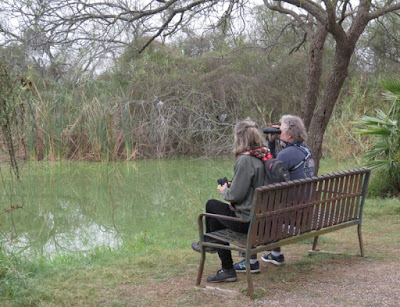 Enjoying a Least Grebe (below) at Grebe Marsh 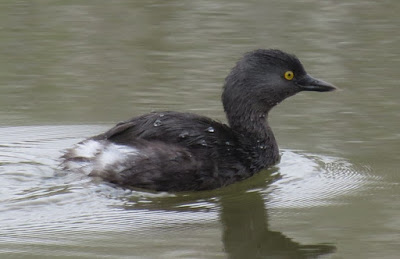 Down at Alligator Lake, the night heron mob was a hit, especially the long-legged immature Yellow-crowned!  A couple of male Anhingas was quite spiffy, and as I noticed that a big group had found the Pauraque, I left my charges with the herons and tootled down to locate the bird.  Turns out the group was being led by my friend Michael Marsden, and he pointed the thing right out for me (and it was in a different position than normal, so I’m glad they found it)!  So after they went on we three went up and also got scope views of the snoozing caprimulgid! 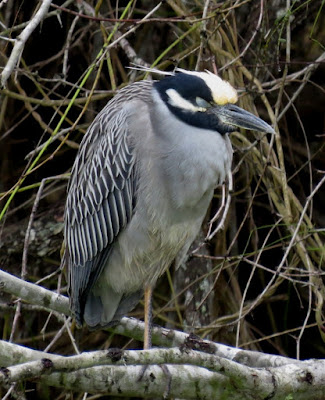 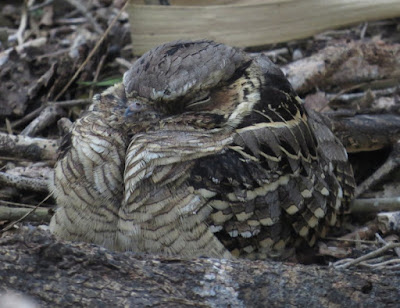 The famous Pauraque is stealthfully keeping an eye on us!

We headed straight back after that, but not before trying unsuccessfully to draw out a singing Olive Sparrow and getting brief views of a Common Ground Dove along the trail.  A gentleman we had seen in the blind told us that he had both the Virginia Rail and Sora back near the boardwalk, along with the anis, so on we went, picking up some White Ibis on the way.  We checked out the area, but no rails or anis were to be found (Sandy thought she saw a little rail-sized bird scoot into the reeds, never to be seen again).  So we took one more quick look at the ducks and chatted with park host Laura Paulson on the deck, who showed us where the anis sometimes showed up (“way over there”), but we were too beat to take another hike out there (for a “maybe” bird, Craig said).  In the meantime a White-tailed Kite went after a Harrier, so that was exciting!


Craig had a modest SLR camera with him, so I gave them a choice of going somewhere with more feeders birds, or road-birding for raptors and sparrows.  They chose the latter, so we headed up to Brushline Road!  It was rather quiet to start, but we did manage a female Pyrrhuloxia on a fence, several Savannah Sparrows also on a fence, a big mob of Lark Sparrows in the plowed field, and a whole slew of regal Sandhill Cranes near the rapidly-drying pond!  A Merlin shot overhead just before SR 186, and on the north side we had a cooperative Bewick’s Wren, and an odd noise and scuffling in a dead tree next to us turned out to be a sapsucker when the thing darted away and started saying something more recognizable! J  Turkey and Black Vultures were all over, but a different-looking pair of raptors turned out to be their life White-tailed Hawks!  We also had lots of Redtails (including one that looked like a “Fuertes’”), and a big commotion next to the road turned out to be a youngster that had just procured lunch!  A Roadrunner finally cooperated, and Caracaras and Harris’ Hawks gave nice views.  The mammalian highlights included several Nilgai!

Craig checks out something along Brushline Road 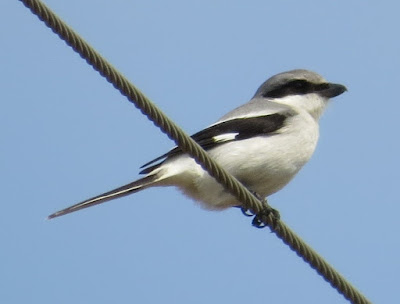 The farm pond was quite productive this time, with lots of ducks and three Roseate Spoonbills being the highlights, along with what I think Craig said was an Audad (a type of exotic sheep) with two cute babies (and the Emu, of course J)!  While scoping the ducks I found an American Pipit strutting along the shoreline!  Ken Baker Road had lots of shrikes and a flyby Long-billed Curlew, as well as a brilliant Vermilion Flycatcher and a not-so-brilliant Eastern Phoebe.  A Horned Lizard ran across the road that unfortunately Craig didn’t get to see before it disappeared down a hole… L  A quick visit to the Rio Beef Feedyard bagged my charges’ life Bronzed Cowbird and Brewer’s Blackbirds, but getting back out was an adventure, as the office staff had left and closed the gate, so I had to call someone to figure out how to get out! 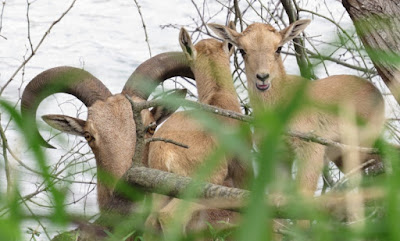 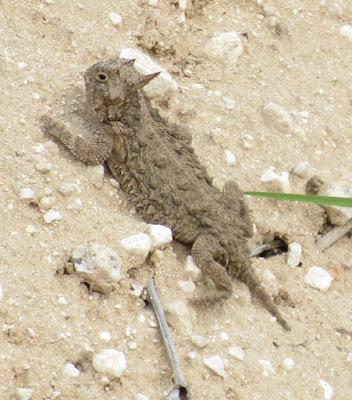 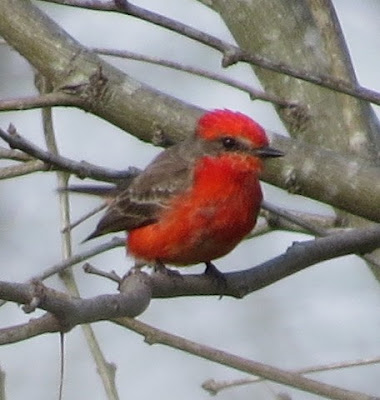 We called it quits after that, with 94 species for the day!  Bird list: