A Change of Plans

It was predicted to be a miserable day today, so I ditched the idea of hiking around Estero Llano Grande and planned on road-birding Wallace Road with David and Lydia instead.  However, while eating breakfast, Lydia requested we make another try for the Hook-billed Kites (on the off chance they might decide to perch for us), so we headed over in the wet, but thankfully it was barely spitting by the time we got to the now-famous levee.  I also noticed that the dirt track going in was quite slick, so we parked past the bridge on the flat part and hiked back, picking up the cooperative Black Phoebe for the day.  Another trio of folks also happened to be there that turned out to be Mary G. and a couple of clients, but unlike yesterday, they (thankfully) didn’t greet us with, “You just missed it!” J  Lydia agreed to give it 15 minutes, so we schmoozed and listened to the “bitty birds” that stayed hunkered in the vegetation, when a distant “machine gun” revealed the presence of the Ringed Kingfisher!  After awhile Mary spotted him down the canal, but he just as abruptly upped and headed our way, giving us all a great view as he shot down the canal!  A small falcon darted over that I called a Kestrel due to its snappy wingbeats, but Mary called it a Merlin (apparently there was one hanging around), but since I couldn’t get any detail on it I left it up to my charges whether they wanted to count it or not!  (We would see tons of bona fide Kestrels later…)


My timer went off, so we went our separate ways, and since that road was really slick going out, I was rethinking going down Wallace Road (it can be just as dicey when wet), so we decided to road-bird Anzalduas Park, as the roads are paved!  We went via the “Old Military Highway Levee”, or at least most of it:  the dirt levee turnoff was blocked by a dump truck and several big rigs were down in the spillway working on something, so we continued to Conway and picked up the levee again at Chimney Park, enjoying two very wet Red-tailed Hawks on the way!  As Lydia and Dave enjoyed the views of the Rio Grande it was a good opportunity to share about the 2010 floods from Hurricane Alex, and how the areas next to the river flooded, but also how they had to divert the water into the spillway, and how all these now dry areas between the levees were filled to the brim!  The best bird along this stretch was a beautiful adult Gray Hawk sitting pretty, plus a stately Great Blue Heron! 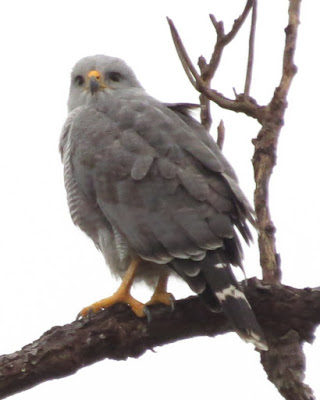 We couldn’t find any hawks in the fields (Mary gave us a head’s up that the Ferruginous was still around), so we headed on in to Anzalduas, and since it wasn’t actually raining (yet), my charges agreed to try and scare up a Sprague’s Pipit in the big field (plus it would automatically clean the mud off our shoes)!  Thankfully we didn’t have to go far before one exploded in front of us, but true to form, he didn’t land, and it started spitting right about then, so everyone said, “Let’s go back!” and we made it back to the car before it got any worse!


Actually, it never really got any worse during the time we were there, so we could occasionally pop out of the car to get better looks at stuff:  a tittering Tropical Kingbird was a hit, and we had our first Vermilion Flycatchers sitting on one of the tall solar panels!  Western Meadowlarks flocked, and closer to the river we got good looks at the Lesser Scaup flock and attending coots.  Sadly there was a dead Anhinga hanging in one of the trees (we were analyzing what could have caused its demise, and fishing line seemed to be a logical conclusion), but we saw live Neotropic Cormorants and Mottled Ducks out in the river.  Another Osprey sat somewhat hidden in the “island” (always a favorite for Lydia as that’s the bird she pointed out to David when they met J), and both a Cattle and Snowy Egret were across the way.  A couple of Spotted Sandpipers went tearing by, and a Greater Yellowlegs called from somewhere unseen.


As we swung around closer to the dam more Vermilion Flycatchers popped up, along with several Rough-winged Swallows batting around (Lydia was duly impressed with the presently empty Cliff Swallow nests under the dam ledges)!  More Cattle Egrets were parading around the grass, and closer to the wooded area the local House Finches were feeding on the ground along with a few Lark Sparrows!  At the restrooms a mob of American Goldfinches landed in a tree, and closer to the entrance a flock of American Pipits mixed with the meadowlarks (I was happy to see those as Lydia indicated that she had never seen either pipit)! A run through the middle section produced more House Finches, a happy-sounding but invisible Altamira Oriole, and what I initially thought was another flyover Osprey but morphed into a White-tailed Hawk!  More Green Jays and Kiskadees delighted, and another swing by the river produced one of the park’s feral Muscovies, plus a distant Ringed Kingfisher that refused to be seen…  On the way out we added a pair of Pied-billed Grebes in the spillway. 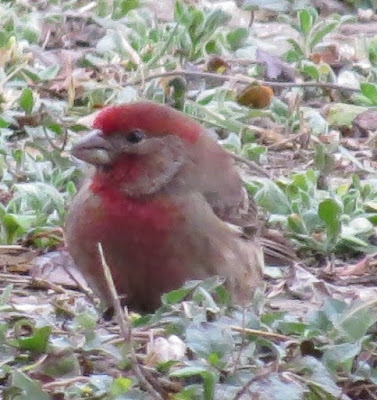 Anzalduas is a stronghold for House Finches! 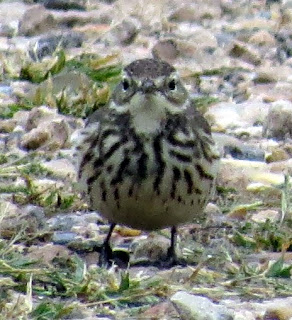 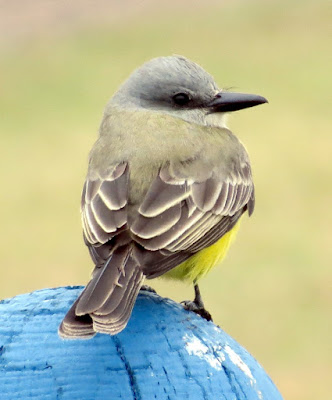 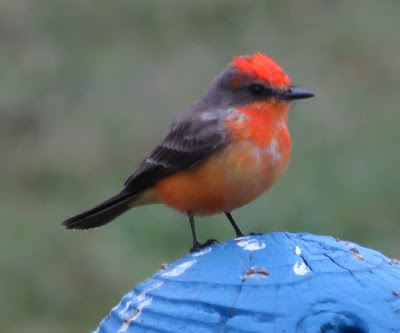 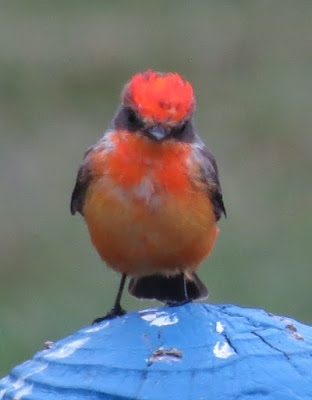 Lydia was very interested in seeing the nearby Burrowing Owl, so we headed that direction but got waylaid by a pair of White-tailed Kites!  About that time the rain started coming down in earnest, so admitting that it was too wet even for her, they agreed to call it a day, ending up with a modest 53 species for the morning. 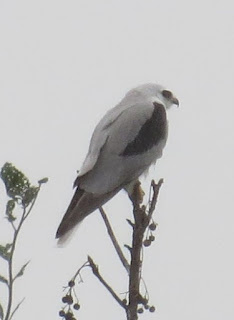