For a half day of birding the standard “go to” place is almost always Estero Llano Grande State Park!  Today (although starting out at a brisk 40 degrees) would prove to be a gorgeous day, with sunny skies and no wind, getting up into the 70s!  Several potential life birds (including both whistling ducks) and a couple of rarities (like Tropical Parula and Hooded Oriole) had us heading in with high hopes!  A fussing Long-billed Thrasher right in the parking lot was uncooperative, but at least we heard the ticking Green Kingfisher coming from the hidden canal!


My initial plan was to head over to Alligator Lake first and give the Tropical Zone time to warm up, but upon hearing Carolina Wrens (another potential lifer), we headed on in anyway, and instantly got a trio of Clay-colored Thrushes!  A female Archilochus hummingbird posed nicely that showed all the characters of a Ruby-throated, so that’s what we called her.  Then no less than three Long-billed Thrashers vocalized near the camp host area, and we finally found one sitting at the tippy top of a tree!  The Carolina Wren sounded very close, but as we snuck up on the sound, several Black-crested Titmice materialized, which made me think I was actually hearing a very wren-like titmouse singing… L  However, as we scoured a little feeding flock there we found a very nice Pine Warbler, a lifer for both girls! 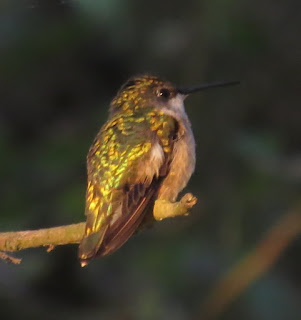 Continuing towards Pauraque Hall, Barbara called us back when she spotted a couple of suspicious birds in the bushes:  one was a better look at a Long-billed Thrasher, but another fluffy guy sitting rather still turned out to be a Curve-billed Thrasher!  A young Harris’ Hawk was yelling from a perch and eventually fell off (quite literally)!  We then ran into the gentleman who was filling the feeders, who then asked us if we’d like to see the Pauraque!  Hey, if he had one staked out right there, let’s go for it!  He was very proud of the fact that he found it all by himself J, and indeed, he was hard to spot!  So after enjoying him we sat at the feeders for 15 minutes, as he had told us than an Ovenbird had been visiting the drip, but we enjoyed the regulars:  Green Jays, White-tipped Doves, titmice, and Golden-fronted Woodpeckers all put on a show, along with a Buff-bellied Hummer.  The best bird actually flew high overhead: a Ringed Kingfisher giving its single-noted flight call!  We then sauntered over to the new Indigo Blind, as Ranger Raul told us that’s where the parulas were hanging out, but instead we just enjoyed more great looks at the regular takers (and Julia finally got her Green Jay picture J)!  Another Long-billed Thrasher snuck in briefly as well, along with a bunny and Fox Squirrel…

Young Harris' Hawk (be sure to watch to the end!) 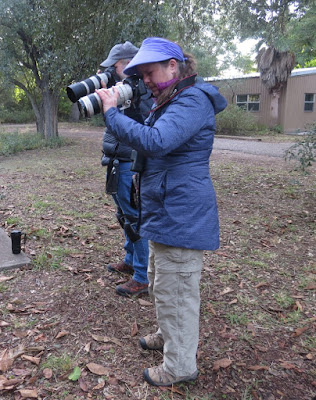 Julia and another birder shoot the Pauraque (below) 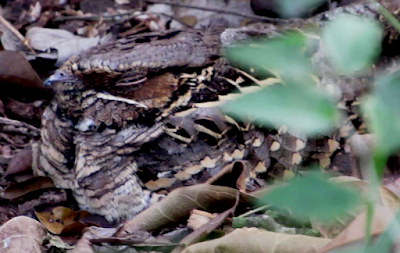 (Video grab - a great alternative when the light's too low for a standard picture!) 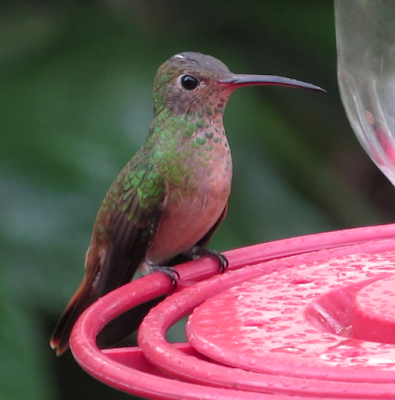 Video grab of a Buff-bellied Hummingbird 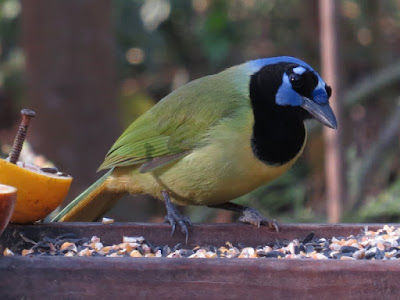 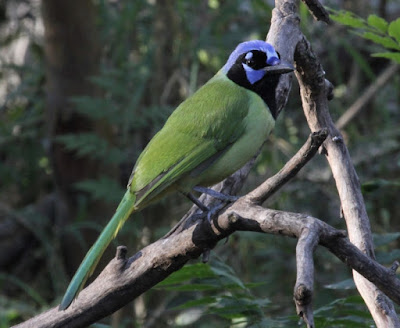 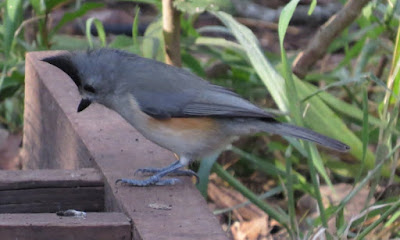 
From there we made the circle, and on the back side closer to the old Methodist camp we hit pay dirt when both an Altamira and the Hooded Orioles showed themselves!  At first Barb found the female, but then the male popped up for good comparisons!  We checked the feeding flocks carefully but just got the standard fare:  Orangecrowns, gnatcatchers, kinglets et al, but a Blue-headed Vireo and Nashville Warbler were nice additions!  A couple of Lincoln’s Sparrows actually sat still for scope views!  More Carolina Wrens sang in stereo, but as per usual, we just couldn’t pin one down… L  The hawk serenaded us the whole time, and at one point had claimed the very tippy top of one of the Norfolk Pines!  On the way out another birder cottoned us on to yet another Pauraque behind a sign! 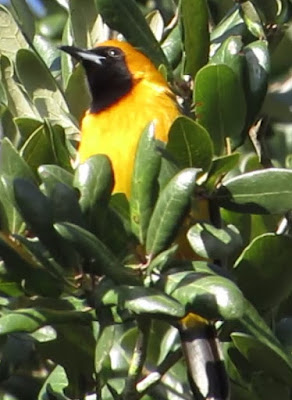 Video grab of the male Hooded Oriole, rare this time of year! 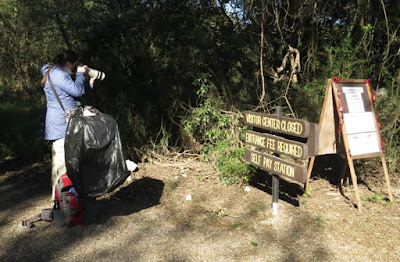 The bad news was that Raul had informed us that the thousands of whistling ducks that had been there last month were totally gone, except for some that were hanging out in the actual Llano Grande! L  I had heard some fly over earlier, so I was hoping we’d see some somewhere eventually!  When we got to the main building to check in and take care of business, he was indeed right:  not a whistling duck to see seen anywhere!  The light was terrible (as per usual on a sunny morning), so we headed to the boardwalk so we could get the sun to our backs; we scared a Sora out from under the boardwalk, and Barb spotted a couple of Cinnamon Teal, but the place was alive with Green-winged Teal and Shovelers!  There were also plenty of Least Sandpipers around, and as we headed on, several Stilt Sandpipers were feeding alongside them.  A flock of dowitchers had flown by earlier, but we never saw them land.  But we did get a grassy view of a feeding Lesser Yellowlegs.  A Kiskadee posed over the boardwalk for Julia’s camera! J 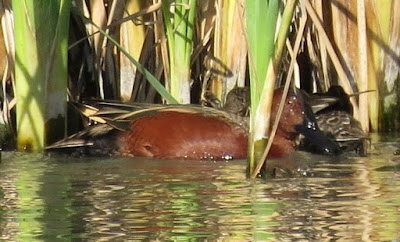 Male Northern Shoveler with his harem...

We took the long route to the levee, scaring up several Savannah Sparrows in the process (and hoping for something more exotic J); as we passed Curlew Pond I heard a Tropical Kingbird, and as we were trying to spot him a Least Flycatcher gave its wit call!  We then headed towards the levee and ran into the same gentleman with a big gun that was at the “kite spot” yesterday (he reported he stayed all day and the birds didn’t show up until the afternoon), but he sadly informed us that there were no Black-bellied Whistling Ducks in the llano L but the Fulvous Whistling Duck was in Dowitcher Pond!  So we skipped the levee and headed straight to said pond, where we had lots of Black-necked Stilts and more teal, and even a Pintail!  We were sweating a little until we finally found the Fulvous in beautiful light!  The Tropical Kingbird decided to show as well, so we got scope looks at him. 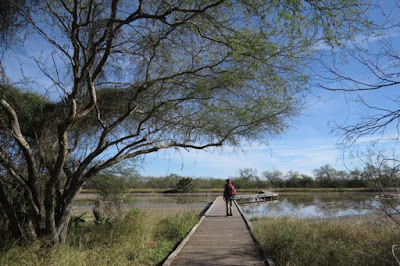 Julia heads out to Dowitcher Pond 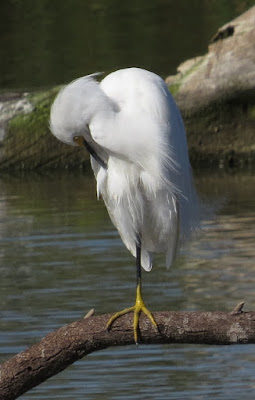 A Snowy Egret primps for the day... 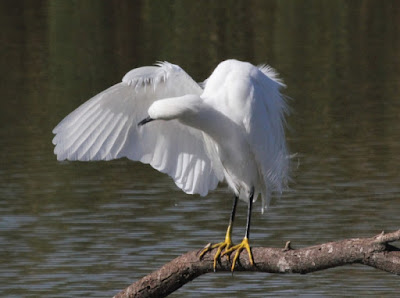 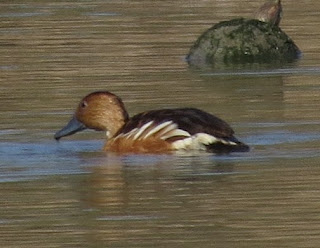 
It was almost time to head home, so we opted to go back to the Tropical Zone (the guy said he also had both parulas near the camp host area), only we got waylaid by the Sora who was coming out in wonderful light, so of course both Julia and I had to get some pictures! J  After that we really had to get going, so we headed straight to the car and headed home with 66 species for the morning. 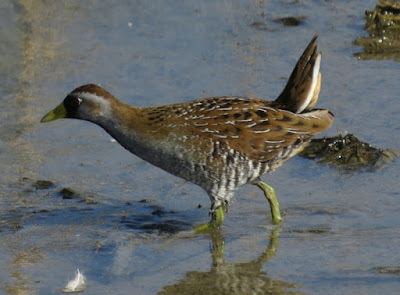 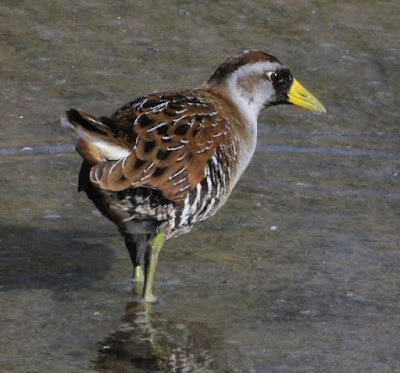