Barbara and Julia had been friends since age four, but it was only recently that the latter got the former into birding, so they were both down during a break in the academic year to see some new birds!  Julia had traveled the world and had seen many of our “semi-specialties” in Arizona (and even Costa Rica!), but almost everything was new for Barbara!  I had planned the standard tour, but decided to check the now-famous levee for the Hook-billed Kites!  It was even colder and windier than when Sue and Billy and I had come last Saturday, but unlike last Saturday, the birds were a no-show for the half hour we gave it (and the birds apparently hadn’t been seen the day before, which didn’t bode well).  But it wasn’t a waste as far as my charges were concerned:  every little feather was special!  Right off the bat an Anhinga flapped overhead, a pair of Altamira Orioles gave great views, and Green Jays entertained.  A brilliant Vermilion Flycatcher gave some a brief view as did a peeping Black Phoebe, and a Marsh Wren sang unseen.  We heard a Red-shouldered Hawk yelling, but never spotted it.  A male Ladder-backed Woodpecker put on a great show in a dead tree right next to the levee, while a female Golden-fronted was further back in the woods.  On the way back to the car two Tricolored Herons flew overhead.

Looking for Hook-billed Kites along the now-famous levee

We finally decided to head to the feeders at Bentsen, where the most action seemed to be right in the parking lot:  a whole herd of Chachalacas came running over, and were promptly bullied by a Mockingbird!  That was a first!  A tree full of American Goldfinches had a few House Finches in with them, which shortly joined a big flock of Lark Sparrows and even more House Finches on the ground, and the males had a variety of colors, from orange to rose!  At the canal the Black Phoebes were way down there and showing only when they flew over the water, so we continued to the Nature Center Feeders to see what would come in.  An Orange-crowned Warbler was checking out the empty peanut butter feeder, but the east side had more action, with several White-tipped Doves on the ground, more orioles and jays, plus Cardinals adding to the color!  A couple of Chachalacas came in as well, along with a pretty Golden-fronted Woodpecker.  On the way out the Black Phoebe was more cooperative, and a Buff-bellied Hummingbird gave a brief appearance at the tram stop, along with an Olive Sparrow on the ground! 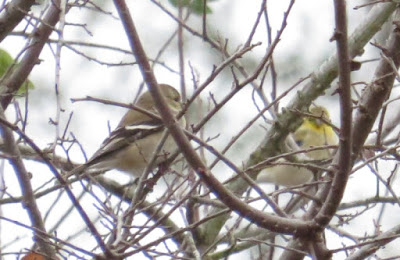 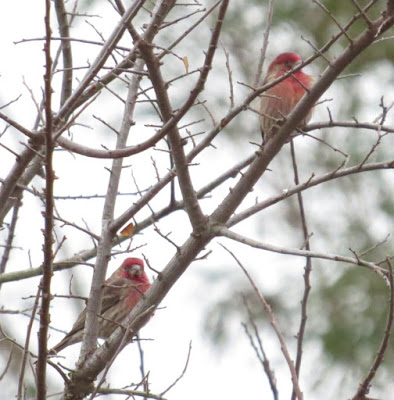 House Finches (still considered rare in the Valley but are becoming somewhat expected in some places); rosy ones... 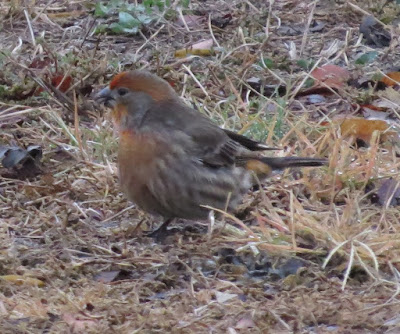 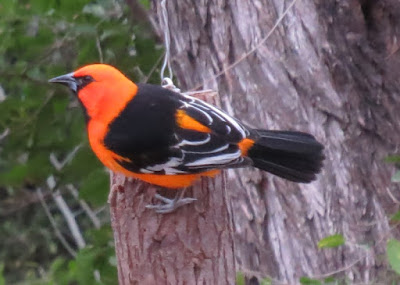 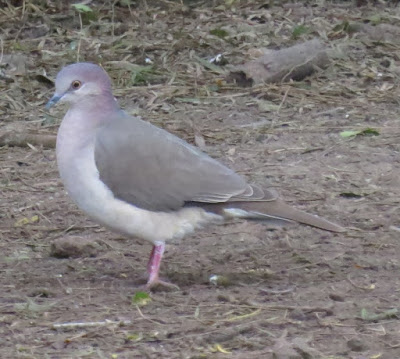 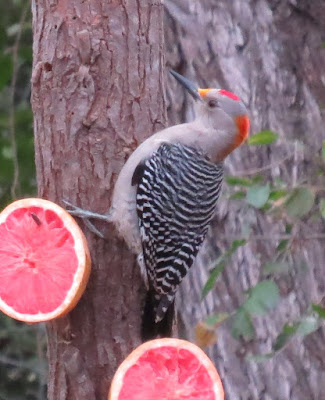 From there we headed down Old Military Highway towards Anzalduas.  I heard a Couch’s Kingbird pupping in the sunflower field, so we piled out and got brief views as he flew off, but a flock of Lesser Goldfinches feeding on the sunflowers stole the show!  We took the levee to Anzalduas, and the girls were duly impressed with the view of the Rio Grande, but we didn’t pick up much bird-wise until we got to the “hawk field”, where the numbers were down from Saturday but we still picked up several White-tailed Hawks (mostly juvies), some Caracaras, and a distant young Redtail in a tree.  There were some other birders there, and one gentleman got on a distant hovering hawk that he thought might be the Ferruginous, so we all tracked it until it finally came closer and landed in the field to the north, showing us the nice white pitagials!  Another lifer for the girls!  Heading down the entrance road I casually waved to another carload of birders and stopped for some Savannah Sparrows, when the car suddenly started backing up and parked right next to us – it was my friend Tamie and Father Tom! J  Didn’t realize who it was when we passed them, and they weren’t gonna let me get away without saying hi! J 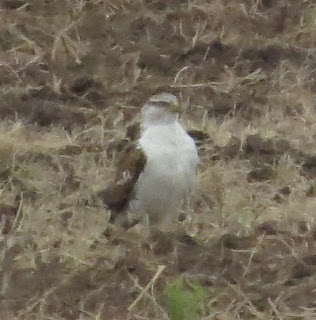 The park was open today, but Julia had already seen Sprague’s Pipit in Arizona (and none of us were thrilled with the idea of tromping across the field in that bitter wind), so we car birded the park; no kingfishers on the river, but we did see a nice Osprey, and the girls picked up a couple of Coots.  Loggerhead Shrikes were quite cute and fluffy, but the highlight here was no less than three Vermilion Flycatchers (one a bright, full adult male)!  A titmouse came out at one feeding flock that we stopped for, but not long enough for everyone to get a good look… L 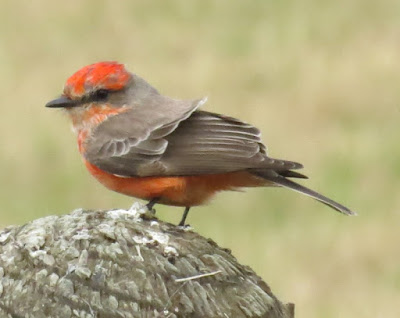 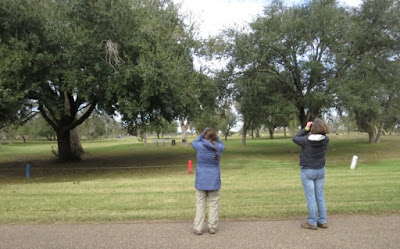 Looking for the titmice.. 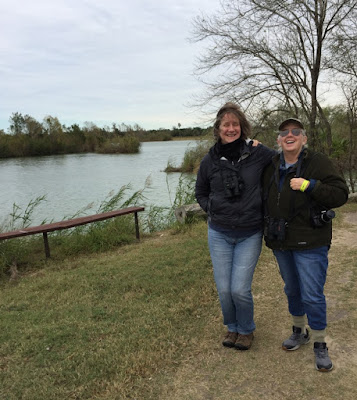 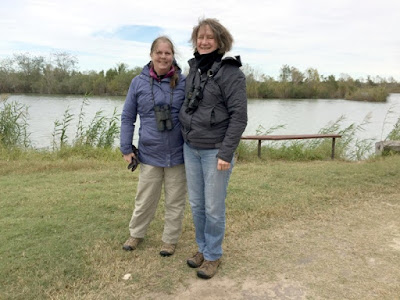 We discussed options after that and decided to go to Santa Ana, but not before Barbara spotted a Coyote trotting across the “pipit field” on the way out!  Billy had pointed out the Harris’ Hawk pair Bill Clark had banded and that had a territory along busy Military Highway, so I was keeping an eye out for them along the way, and there he was on a wire!  We detoured to Hidalgo for the Monk Parakeets (a flock of Green Parakeets had shot over the freeway on the way to Mission, but the girls couldn’t discern them in the gloom), and Barbara was amazed at the pretty winter pattern of the Starling (I think she described them as “greasy black” back home J)!  It was still cool and breezy at the refuge, but some little things were moving here and there along the trail; we didn’t run into the Golden-crowned Kinglet, but we had the Ruby-crowned along with Orange-crowned and Yellow-rumped Warblers.  Three Common Ground Doves flushed into a tree and gave us scope views, and I heard a Beardless Tyrannulet that of course didn’t wanna play ball, as did a fussing Long-billed Thrasher and a couple of song-battling White-eyed Vireos.  What was cooperative to my surprise was a brilliant Verdin overhead! 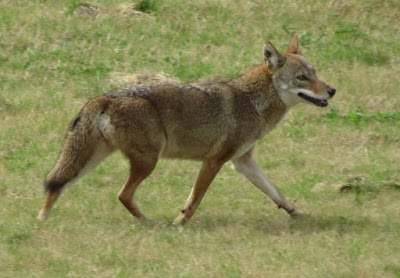 Coyote hightailing it across the field


Willow Lakes contained their life Mottled Ducks and Least Grebes (the latter was a big target), along with the usual Gadwall, Shovelers, and both Blue-winged and Cinnamon Teal (interestingly, the latter was not a lifer for either one).  Shorebirds included Black-necked Stilts, several Greater Yellowlegs, and pods of Long-billed Dowitchers across the way.  Soras were crying all over, and as we approached the final deck, Julia grabbed me by the jacket and pulled me back – she had spotted a Green Kingfisher on the culvert!  We saw her dart away, but thankfully she shortly came back and gave everyone great views!  On the hike back I pointed out the tree snails that are the staple Hook-billed Kite diet. 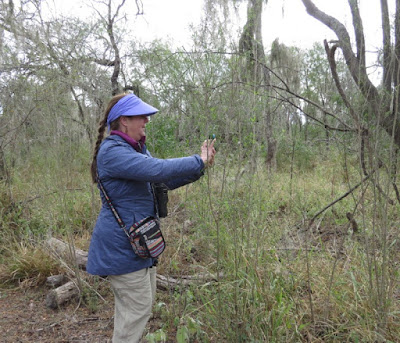 Julia shoots a tree snail (below), staple of the Hook-billed Kite! 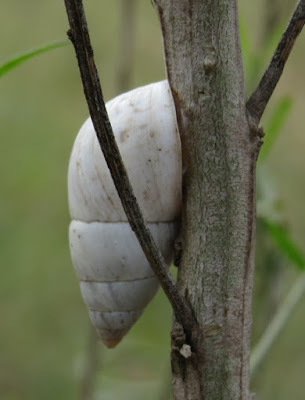 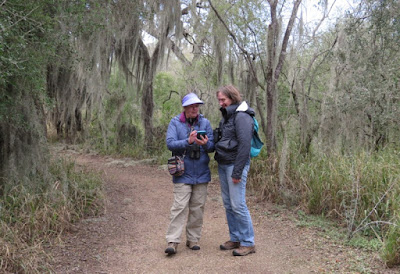 Since the Ringed Kingfisher was high on their list, we decided to head to Edinburg Wetlands for our last stop.  Hoping to scare up more songbirds (and scaring up a Zebra Heliconian instead), we took the long way to the north pond, where we added both flavors of cormorant, lots of Snowy Egrets, several White Pelicans, and a couple of Black-crowned Night Herons.  I planted the girls at the observation deck while I ran to the facilities, and by the time I got back they had found the Ringed Kingfisher down by the spillway, along with a Belted!  We decided to go down to that observation platform to get a better look, but on the way discovered a pod of Roseate Spoonbills in the canal!  The Snowy Egrets with them were quite fluffy as well, but as we watched yet another Green Kingfisher ticked from the branches!  (Another Buff-bellied Hummer also made a brief appearance at the feeder…) 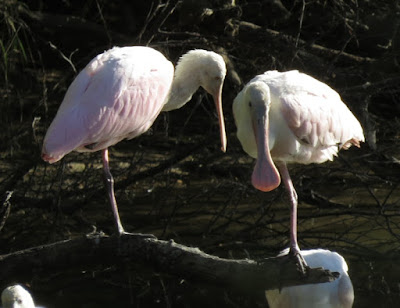 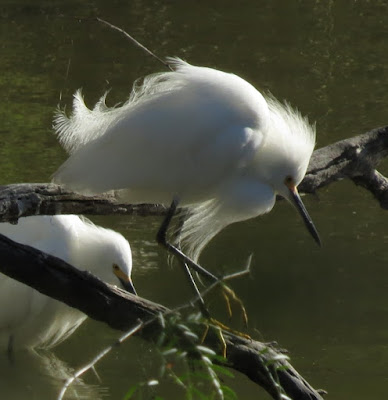 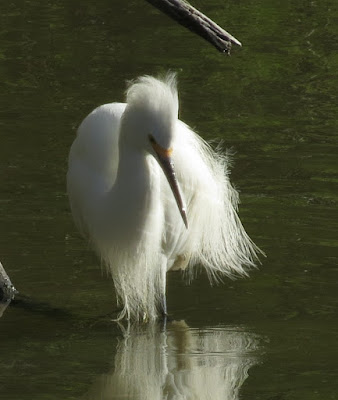 Heading on down to the platform, we got great looks at the Ringed Kingfisher (“tangerine” colored, one of them quipped J), along with great comparative looks at both cormorants decorating one of the trees across the way!  While Barbara visited the facilities Julia and I headed down the canal trail and eventually to the little blind near the entrance; a Wilson’s Warbler gave great views, but something batted around that I just couldn’t place – it looked and acted like a White-eyed Vireo put with no color and a plainer face!  The girls didn’t let me live that one down as I was totally stumped!  Best I could guess was a young White-eyed, as I recall those buggers fooling many of us in times past, making us think we had a Bell’s a first! 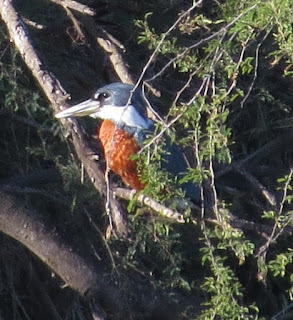 
Headed home after that, with 85 species for the day!  Bird list: