A Walk Behind the Wall

Alan and Sandy were Winter Texans from Chicago and staying with us for about a month before heading to other places in the Valley, and had already done quite a bit of birding on their own, but were curious about the “guiding” aspect: they preferred hiking to road birding, wanted to go someplace new, and not too far away.  Well, two outta three ain’t bad, as they had already visited the few places in Hidago County that offered good long hikes, so I suggested that if they could endure a 45 minute drive to and from, they might enjoy Resaca de la Palma State Park!  Sounded good, so off we went!


Well.  On the way we got to talking about The Wall and border issues, and the subject of Sabal Palm Sanctuary came up as an example of a refuge that is actually behind the current Wall and is better than it’s ever been!  That piqued their curiosity, so we continued south to the toll road.  Only I had forgotten about the road construction on 511 and we got totally turned around… L  Finally made our way back to 511 via Ruben Torres, and made it to the sanctuary!


After paying the entrance fee and using the facilities, we headed through the new butterfly gardens where we actually got pretty good looks at three skulkers right away:  a very friendly White-eyed Vireo, a Long-billed Thrasher sitting out in the open (until another one chased it off), and an Olive Sparrow poking along next to the path!  As we made our way through the woods more skulkers vocalized but didn’t show themselves, primarily House and Carolina Wrens.  As warned, the Resaca was dry (the guy in the office told us how much it cost to pump the water in; we almost had collective strokes), but we enjoyed a beautiful walk through the woods and especially up on Vireo Lane through the mesquite forest.  Most of the action was in the form of feeding flocks that we tried to sort through:  Black-crested Titmice were the dominant species, and surprisingly more White-eyed Vireos were very cooperative!  Green Jays powered through, and Orange-crowned Warblers and Ruby-crowned Kinglets gave us the looking over.  We got great looks at several Ladder-backed Woodpeckers, and one Golden-fronted posed for scope views. 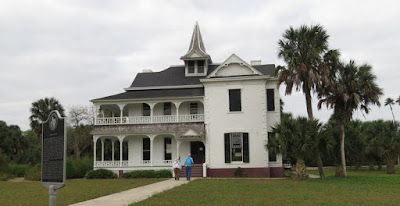 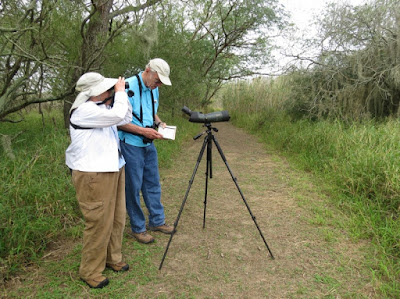 Sandy gets on a vireo while Alan consults the Sibley...

Circling around, we spotted a blind that was new since the last time I was there, so we headed down and found the “puddle” the guy had told us was still hanging on…  A Sora cried almost immediately, and of course Yellowthroats were chacking all over, but the highlight was the Gray Hawk that made a couple of passes!  We didn’t bother with the big blind but rather went straight to the Forest Trail, where we ran into another feeding flock that, in addition to what we had already seen, had a Black-and-white Warbler and at least two Wilson’s Warblers that cheked but never gave us a look. 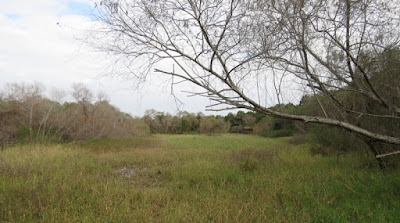 View from the new blind 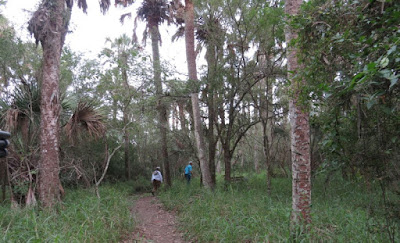 Sandy and Alan on the Forest Trail

Getting closer to the feeders, we flushed White-tipped Dove after White-tipped Dove in the woods, but they never did actually come into the feeder area.  Some Green Jays gobbled down what was in one of the hanging feeders, but the real action was yet another feeding flock that contained a Black-throated Green Warbler, a lifer for Sandy!  A Buff-bellied Hummer rattled but never came in…

From there we headed on to the Native Trail, heading through the old butterfly garden, where Sandy found an American Robin sitting on a log!  (I think they were dubious of the fact that the locals get excited about them, as they’re actually rarer than the Clay-colored… J)  The weather wasn’t the best for butters (nice temps but overcast skies), but a Turks-cap White Skipper showed well.  Yet another feeding flock (and yet another friendly White-eyed Vireo) showed up near the Rio Grande overlook, along with a pupping Couch’s Kingbird (that was hanging with a Golden-fronted Woodpecker wherever it went; we thought that was kinda funny), and while nothing sailed by while we waited, it was a nice rest!  We hiked the rest of the trail, but it was rather quiet by that time; we kicked up a wren of some kind that didn’t stick around while a Verdin called in the background, and we heard some Chachalacas making little chuckling noises unseen in the bushes; a Border Patrol guy rolling by on the narrow levee was the extent of the excitement!  However, a pretty Cardinal did decide to give us nice looks on the way back to the Visitor Center! 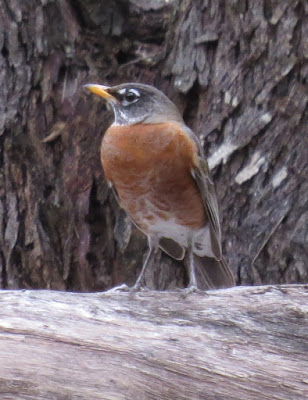 American Robin, rarer here in the Valley than the Clay-colored! 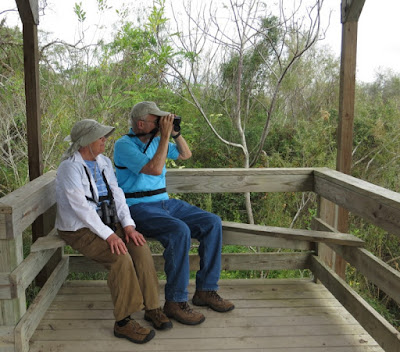 Sandy and Alan at the Rio Grande overlook 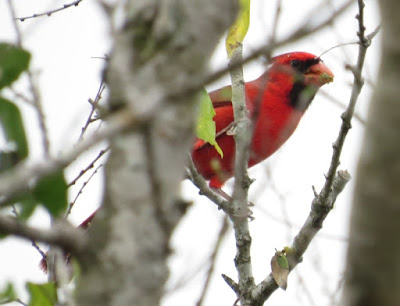 I was a little bummed at the number of species, but after comparing today’s count with other surveys I’ve done of the reserve during January, this was actually the highest count I’ve had for the month with 33 species!  Bird list: