A nice little group showed up for this month’s Birder Patrol led by Pat Heirs, and since migration was well under way, Norma (president of Arroyo Colorado Audubon, aka ACAS) had chosen Frontera Audubon Thicket in Weslaco, a jewel of a place within suburbia that is often a great migrant trap, to say nothing of being a superb rarity trap!  No rarities today, but right away in the parking lot we had constant flyovers of Chimney Swifts, both Barn and Bank Swallows (with at least one Cliff), and a dozen Red-crowned Parrots!  We headed in to give Chris our entrance fee, then hit the trails, keeping an ear and eye out for stuff.  There was a bit of activity near the “Green Kingfisher Resaca” (some dragonfly folks call it the “Mexican Wedgetail Resaca”, and we did indeed see an amberwing of some kind there); the main show was a Great Crested Flycatcher or two, plus a beat-up Clay-colored Thrush.  The main pond had a Snowy Egret and Spotted Sandpiper, and while we never spotted them (no pun intended), both Ringed and Green Kingfishers called unseen.  Dragonflies were all over, but the only ones to settle down were Roseate Skimmers.  Someone thought they heard an Eastern Phoebe, but I pointed out that it was actually a Lesser Goldfinch incorporating that into his song; surprisingly they do a fair bit of mimicry!  I also heard a pik-a-chooing Summer Tanager that Ken eventually saw. 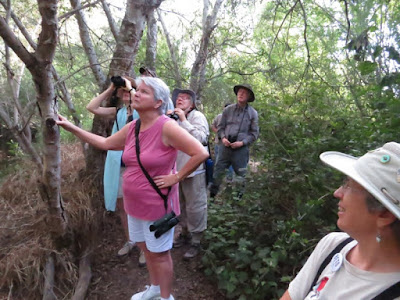 Julie, Baceliza, Pat, and Alan look for a Great Crested Flycatcher while Kathy enjoys a rest on the bench!

The great rains of late June had caused much flooding, and in one of the new “wetlands” we found a group of Yellow-crowned Night Herons.  We checked out the pond beyond the chain link fence (owned by Mr. Payne we found out, in addition to the manicured pond behind his house where a feral Muscovy was hanging out) and picked up a Great Blue Heron, but no kingfishers.  Anis were calling throughout, and someone (I think it was Baceliza) finally spotted one!  I thought I heard a waterthrush, but couldn’t get him to come out.  We were discussing the difference between Sabal and Washingtonian Palms (the former is our only native one), and while the shape of the leaves could be subtle, George pointed out that the Washingtonian has thorns on the “branches” whereas Sabals don’t – that’s a lot easier to see! 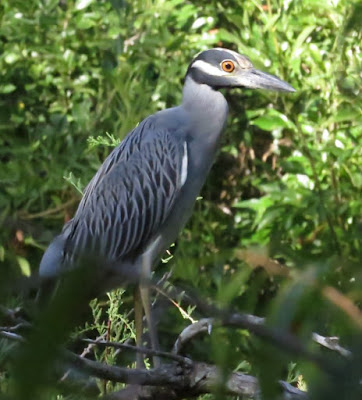 
We took a quick look at the boardwalk area, and sharp-eyed Ken spotted a Guava Skipper on some milkweed (I think that’s what he said it was)!  Back in the woods on the “Dead End Trail” a shy Julia Heliconian fluttered around; earlier we had had a similar Gulf Fritillary.  Rounding the corner Pat was pointing out all the spots where the Blue Bunting had shown up (they have multiple drips along the trails), when a Beardless Tyrannulet started calling fairly close!  He never showed, of course, but a migrating Eastern Wood Pewee was much more cooperative!  A tree-full of Couch’s Kingbirds were joined by Easterns, and a quick sit at the feeders gave us looks at Chachalacas and both White-tipped and White-winged Doves, along with a Buff-bellied Hummingbird. 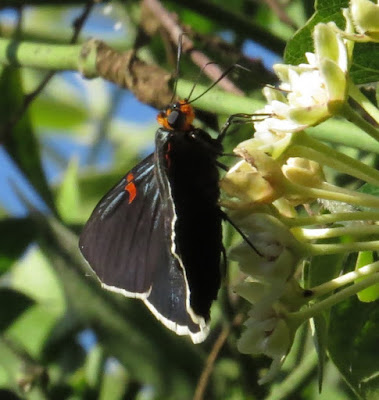 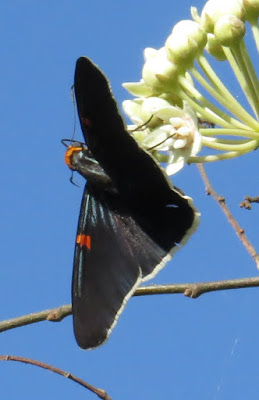 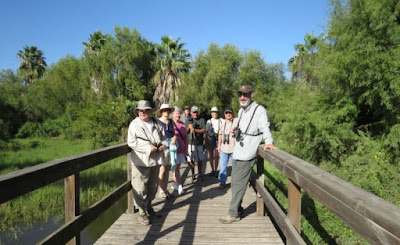 The Birder Patrol on the Boardwalk 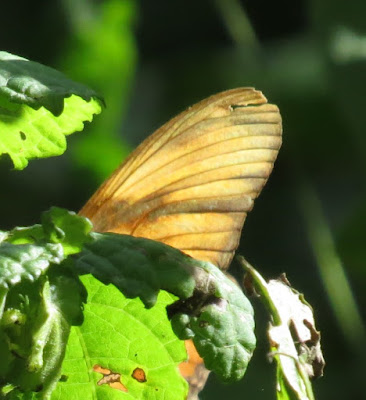 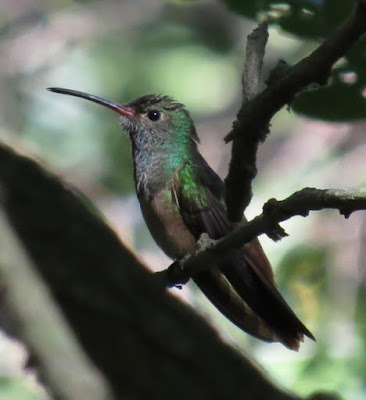 Most of us were pretty much ready to call it a morning after that (although Ken spotted some Yellow Warblers in a Tepeguaje).  Altogether we had 48 species (if you include the feral Muscovy Duck J) for the morning!  Bird List: