Some incredibly rare and beautiful darners had been reported in the last several days (e.g. Turquoise-tipped, Blue-spotted Comet, etc.), so after being good-naturedly razzed by a couple of my odonate friends that I needed to get down there 🙂, I finally had some time after church to make a run down to Santa Ana, where many of these bugs were being found (and is thankfully only 15 minutes away from where I live)!  Most of the action was being reported along the Willow Lakes Trail, where it crosses two of the Willow Lakes (and the only two that currently have any water in them), so that’s where I headed first.  Sure enough, the place was alive with odes, but most of them were buzzing back and forth and back and forth and back and…you get the picture!  There were plenty of Red Saddlebags and Roseate Skimmers (some of the few odes I can ID on the wing), but thankfully a little dasher decided to land, and since my usual MO with odes is to “shoot now and look it up later”, that’s exactly what I did, although I suspected it was a Three-striped Dasher as its white abdominal spot near the tip was square-shaped (and having just gotten back from a dragonfly tour to Costa Rica with Dennis Paulson, the first thing that went through my mind was Square-spotted Dasher, but I don’t think so…🙂 ).  However, after getting home and processing the pictures, I discovered it was actually a Thornbush Dasher, with the distinctive “Y” on the thorax.

Here's the first Thornbush Dasher on the lake to the west of the trail... 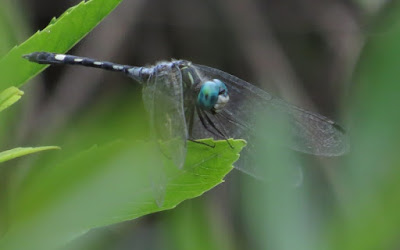 ...and here's a second bug hiding behind the culvert to the east! 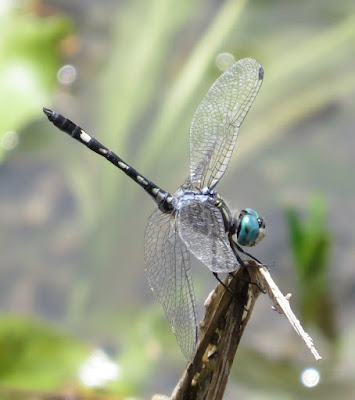 What could be the original bug lands and then "obelisks" - he points his abdomen directly at the sun to minimize the rays beating down directly on it!

The heat was starting to get to me, so I decided to head back by way of the Chachalaca Trail, where I kept flushing all these tiny little moths (along with the Snouts); those that landed on top of a leaf (as opposed to underneath) looked to be either carpet moths or what are commonly known as “grays”, but I couldn’t pin them down to species.  A Northern Beardless Tyrannulet wheeked for the bird list, and where the pavement starts a nice Rosebelly Lizard posed.  I had noticed a lot of tree snails as well, so I was hoping the Hook-billed Kites would start showing up as a result! 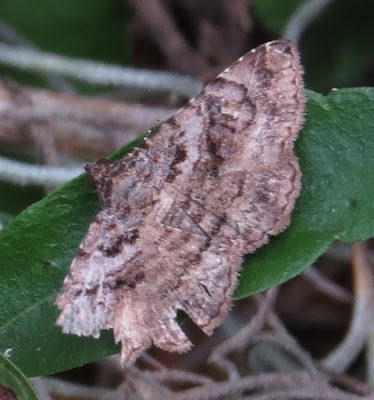 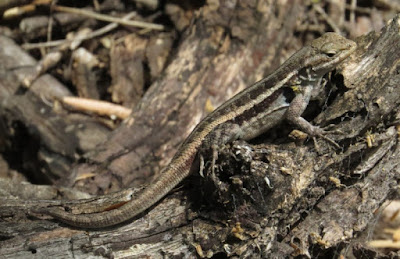 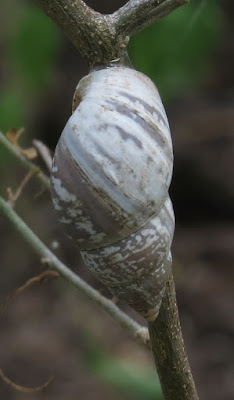 
The canal is always a good place to look for odes (damselflies at least), and this time a Smoky Rubyspot had landed on the end of a twig, which I got to show to a family passing by!  A Blue-ringed Dancer was on another twig directly below the bridge, which was a challenge to shoot as the breeze kept moving it! 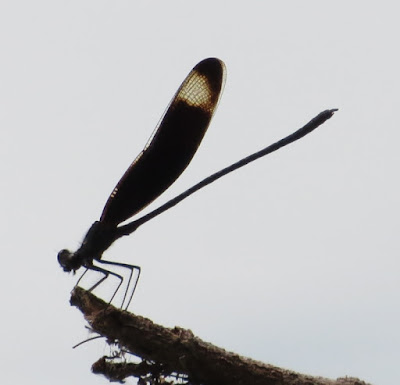 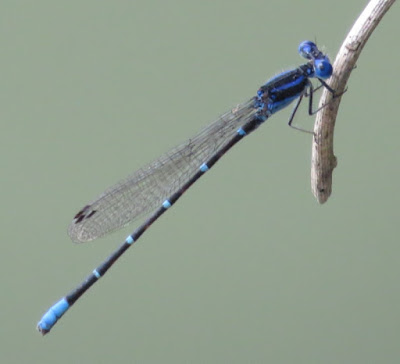 
I was able to cool down enough in the car by driving over to the other end of the parking lot that I braved the new butterfly garden and the “Entrance Pond”, which was dry as a bone this time, but at least I was able to scare up a family of Clay-colored Thrushes and several Tropical Leafwings hanging around this fruiting cactus (and I see they’ve also put in a water feature, so we’ll have to visit that again in migration)!  I also stumbled upon a cactus leaf that was covered with cochineal bug nymphs, the famous bugs that produce a red dye! 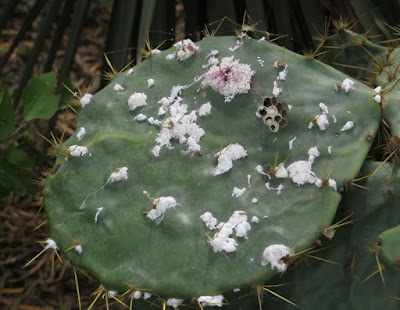 The "white stuff" is actually a protective coating that the nymphs produce; the nymphs themselves produce the "red stuff" from which carmine dye was made! 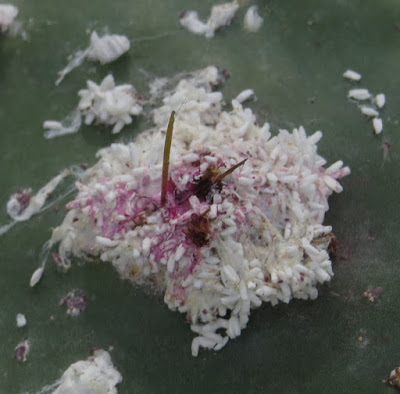 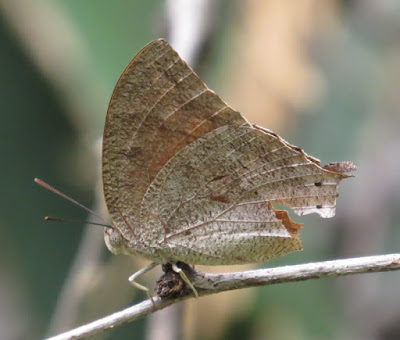 
I had had it after that, but the show wasn’t over:  when I got home to the Alamo Inn gardens, a tiny little Southern Skipperling greeted me, along with our resident Polydamus Swallowtail, which is usually rather rare in the Valley, but I was told we had its host plant nearby, so that stands to reason!  A big Silver Orb Weaver was also hiding in plain sight – a stunning creature! 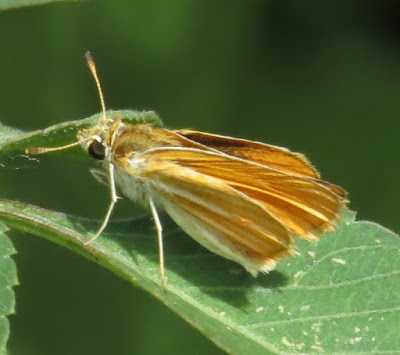 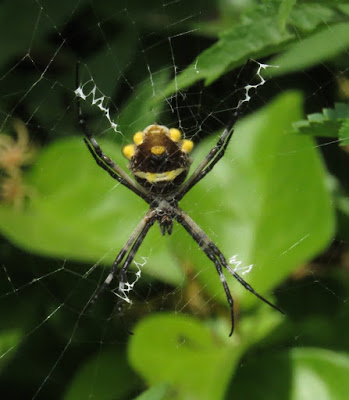 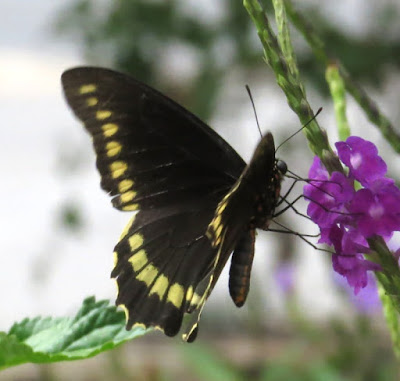 The flighty Polydamus Swallowtail can be hard to shoot! 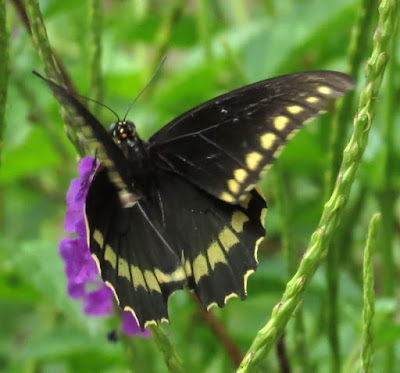 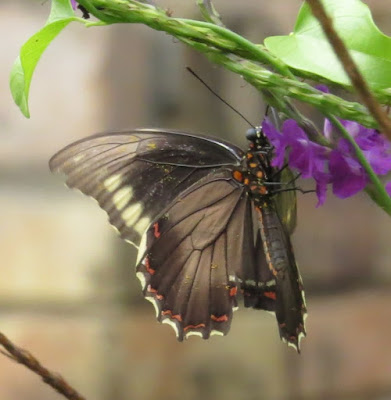 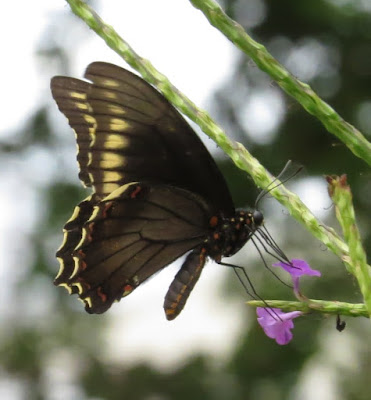 Even so, I tried to keep an eBird list at Santa Ana, so here it is: