The Resurrection of a Road

I had been antsy to get out to Laguna Atascosa and do a BBS-style survey since they finished resurfacing General Brant Road, so finally got the opportunity today!  Not sure if the Rio Hondo Bridge was open yet, I went by way of San Benito and cut up to General Brant from FM 510 via FM 803.  Having found out from their website that the Bayside Drive is still not open L, I started surveying just past the residential area that’s east of FM 1847, as it’s almost all good thornscrub and prairie habitat with only a few scattered houses.  My first pre-dawn stop hit pay dirt with a Botteri’s Sparrow singing right next to the car, and while I waited for sunrise I logged a nice selection of things including both Olive and Cassin’s Sparrows, Blue Grosbeak, Dickcissel, Common Nighthawks, and Bobwhites.  (I think this first stop is very close to Cactus Creek Ranch, as that was actually the first hotspot that came up on eBird…)

Continuing on, another stop had a nice pair of White-tailed Hawks in an open area, along with a Harris’ on another pole.  Some distant whistling ducks flew by that lacked the tell-tale white wing patches, making them Fulvous (had plenty of the Black-bellied as well).  I happened to stop at a couple of the “wildlife corridors” that they built to encourage animals to travel under the road and not across it; here a Roadrunner sang (the only one of the day, surprisingly), and a Bordered Patch fluttered in and posed for pictures.  Shortly after that is the must-stop-at wetland that feeds into Laguna Atascosa (there’s also a paved parking area for the Prairie Trail on the right):  the place was alive with Least Bitterns, Common Gallinules, White Ibis, Black-necked Stilts, a single Solitary Sandpiper and Gull-billed Tern, and even a Green Kingfisher came in to say hello!  The wires were lined with tons of Cave Swallows (plus a few Purple Martins), and several other herons either flew over or called from the reeds.  Down the road apiece you cross a Resaca which often is lifeless but today had oodles of stuff:  Willets, both flavors of yellowlegs, three Spotted Sandpipers, a couple of Black-bellied Plovers, another Gull-billed Tern, and even a couple of Wilson’s Phalaropes twirling around in the distance! 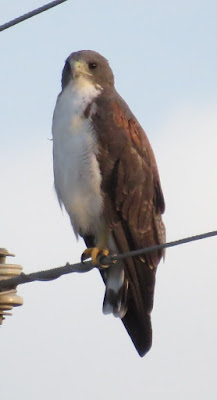 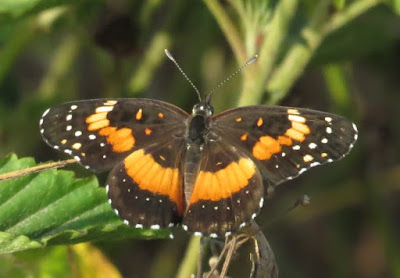 
General Brant no longer “T’s” like it used to at Buena Vista, but rather the latter swings to the right, while you deliberately make a left turn towards the refuge headquarters.  By the ag fields an Upland Sandpiper flew overhead, and an Olive Sparrow came right out for pictures!  The day’s only Starling showed up on a wire, along with the Mockingbirds, Mourning Doves, and even a Collared Dove!  After getting my pass (where I found out that they’re hoping the Bayside Drive will be open to vehicles by this time next year) I headed out to Osprey Overlook, where a guy had his ham radio equipment set up!  So I listened in on these conversations while scanning Laguna Atascosa; picked up a single Little Blue Heron, several Black and Forster’s Terns out over the water, and a couple of Pied-billed Grebes on the water!  A quick look down the “dead end” road didn’t add anything new, but had several Scissor-tailed Flycatchers flopping around. 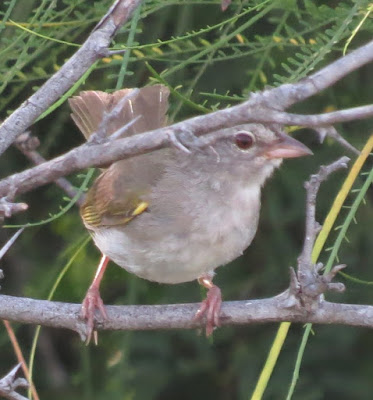 A few Olive Sparrow shots along the entrance road 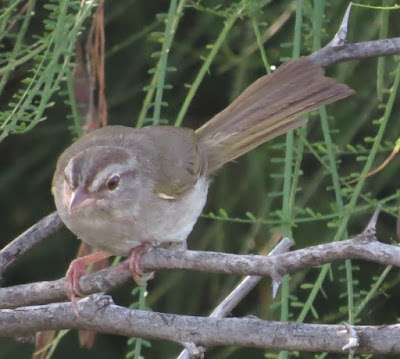 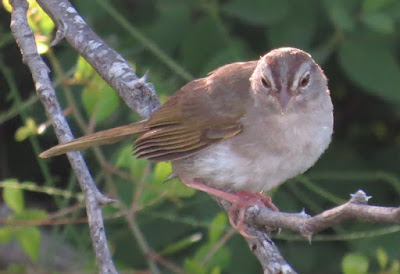 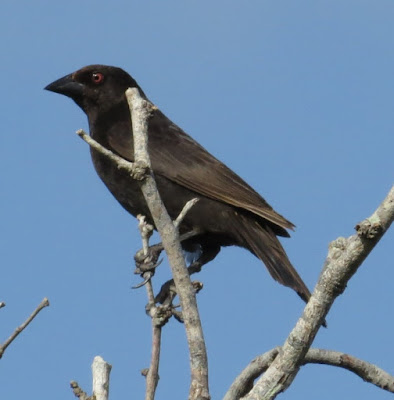 Bronzed Cowbird on the road to Osprey Overlook

Wandered around the headquarters area before checking out Buena Vista:  scruffy-looking Green Jays were coming to the open feeders along with a White-tipped Dove and Bronzed Cowbirds, and a couple of Long-billed Thrashers visited the drip at the blind (one was pristine and one was pretty scruffy).  Nothing was blooming so there wasn’t much butter action except for a Lyside Sulphur trying to hide, but on the way to the Kiskadee Trail a mom Chachalaca was feeding her three adorable babies behind the building! 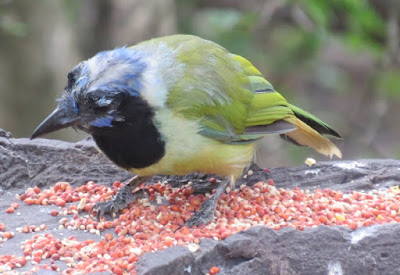 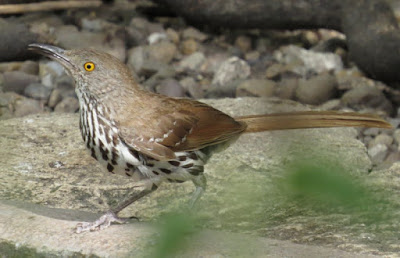 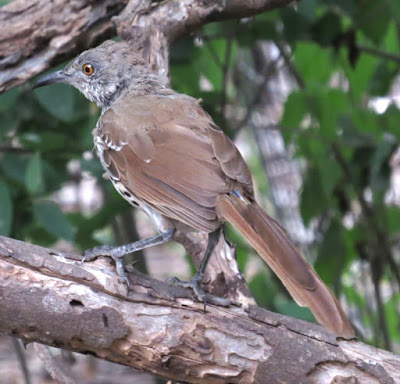 The trail itself was rather quiet except for a couple of anis, but a big surprise was flushing the Pauraque near the amphitheater!  The garden trail across the parking lot had several Snouts, and a little time at the gazebo water feature produced a bathing Olive Sparrow and drinking thrashers and cardinals.  A Myiarchus flycatcher came in that sure struck me as a Great Crested:  it seemed to have a marked contrast between the bright yellow belly and darkish gray throat, but unfortunately I couldn’t get a bead on it while it faced me to get a photo; by the time I found it in the viewfinder (my one real beef with the Powershot) it had turned sideways, and the resulting shots were inconclusive to my mind (the “dark gray” throat could easily be seen as an artifact of the light, and the diagnostic pale base to the lower mandible was not visible, although the tertial edgings looked pretty bright). After examining the photos Mary G. concluded that it was indeed a Brown-crested (the tail feathers growing in made it suspect to me as well...). 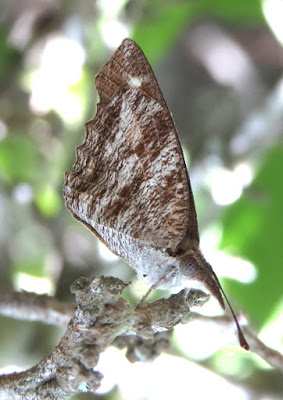 One of many Snouts 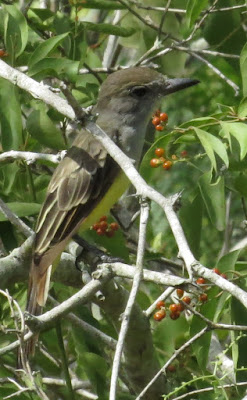 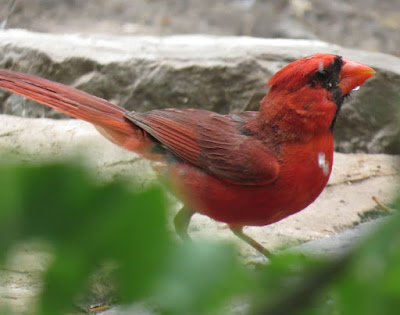 A pretty good storm was brewing, so I wrapped that up and headed for Buena Vista, as I saw cars going that direction and was wondering how much of the road was open.  Thankfully, the stretch of road that goes through refuge land is open, and was able to bag a Long-billed Curlew along here, but the monsoon hit as well, so about all I could do was scout the road!  It was closed again shortly before Laguna Vista, so I just turned around and headed back by way of General Brant, stopping at the Prairie Trail parking area to eat lunch and enjoy The Storm Part 2 that was rapidly headed my way!  Finished just before it hit, so continued on in to Rio Hondo in hopes that their bridge was finally open after years of work, and it was!!  (It’s a straighter shot from Alamo to go north on US 77 to Combes and head directly east…) 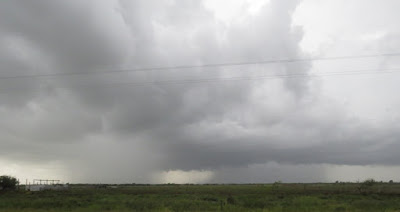 Ended up with a respectable 82 species for the morning!  Bird list: