Another beautiful day greeted us as we headed up to Starr County!  The Salineño feeders were of course closed by now, but we had high hopes of bagging the seedeaters, as they were being seen regularly.  The river was quite high when we got there, and another car had beaten us there, so we parked behind them and immediately saw the Lesser Scaups swimming backwards (just appearing to with the strong current J) and hearing but not seeing the Gray Hawk.  The Chachalacas were also chorusing but not showing themselves.  We headed up the trail, and the first thing we tried to zero in on was the singing Cassin’s Sparrow, who happened to be sitting right out in the open for scope views!  A pair of Verdin was also very cooperative! 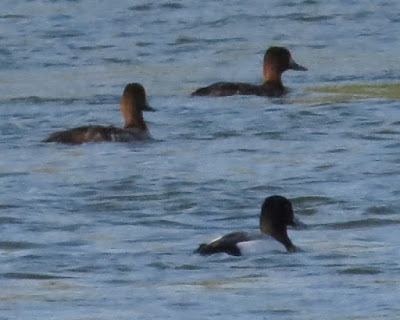 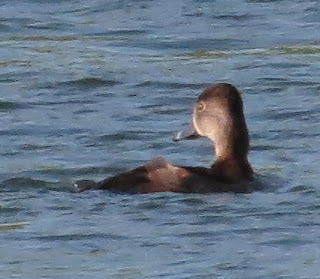 Tam at the river's edge

We arrived at the end of the trail where another birder had a scope up, and as we approached we asked what she had, and she was looking at five Red-billed Pigeons!  We were jazzed:  they were sitting right up top in beautiful light for knockout looks!  While watching them both an Altamira Oriole and a Cardinal hopped up to join them, giving us a splash of color!  The gal’s name was Nina, and shortly her two friends Theresa and Brian came down the hill with no luck with the seedeaters; turned out they were all from Houston coming down for some “spectacular” birding!  We gave the spot a few minutes then crawled up the hill where the same Ringed Kingfisher from last time was in the dead tree, this time with a mate!  Coming from the opposite direction this time, I saw the bank that they were in all probability nesting in, so we kept our distance but still got some nice pictures.  I saw smaller holes in the bank and wondered if they were used by the Bank Swallows we were hearing overhead.  Coming back down the hill I thought I heard a distant seedeater, but it never sang again, and I just wasn’t sure, so we let that one go.  A Red-tailed Hawk soared over the river, proving itself to be a clean-breasted Fuertes’.  After Brian pointed out a Caspian Tern and then showed us where a Ladder-backed Woodpecker had made a nest, we headed back to the car, where the Osprey was again on his pole with a big fish! 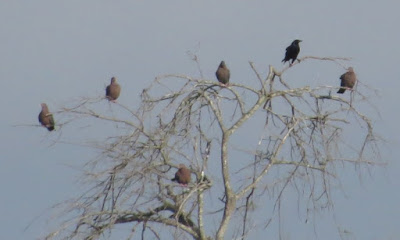 Red-billed Pigeons (with a token grackle) 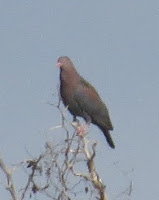 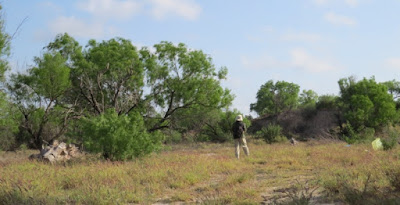 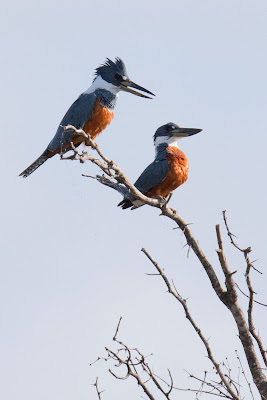 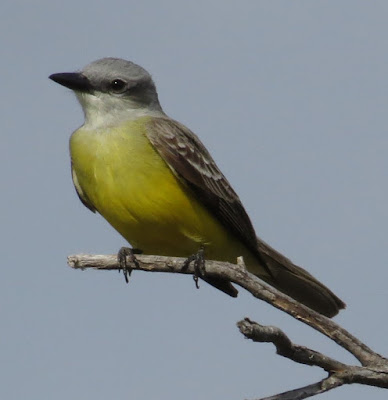 
Next route was the Dump Road, where on the connector road we found a House Finch on a wire!  In the thornscrub we added several Caracaras, Black-throated Sparrow, and Pyrrhuloxia; Tam actually walked much of the road while we crawled along, and managed to spot a lot of stuff that way, including a White-eyed Vireo!  While stopped to enter the eBird list, someone spotted a hawk, so I jumped out, and it turned out to be a very high Swainson’s Hawk! 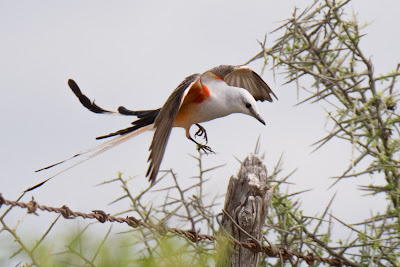 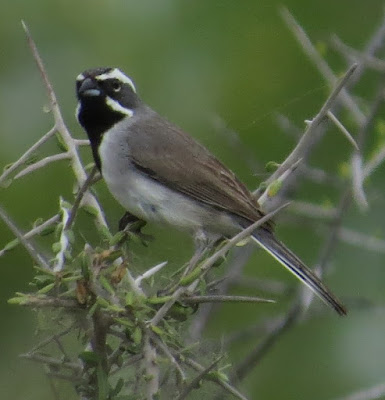 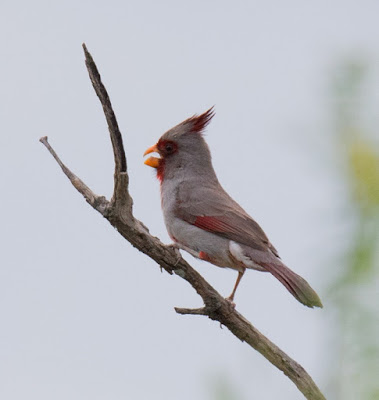 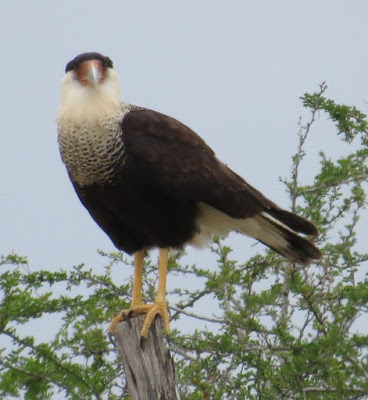 From there we headed to Falcon (Starr) County Park, as Vermilion Flycatcher was high on the want list.  We crawled in the main road and parked at the restrooms, and Tam said, “Watch the Vermilion show up the minute I go in!”  Well.  She disappeared and I spotted a red bird right in front of us – the Vermilion!  That got a good laugh when she finally came out (she had actually already seen one, but Jamie hadn’t), and as they chased the thing around, there turned out to be two birds, one that looked like a young male to me (as his “red” areas were more orange), but they were certainly interacting strangely!  On the way out another cooperative Verdin worked the bushes right next to the car!

Stalking the elusive Vermilion Flycatcher (below) at Falcon County Park 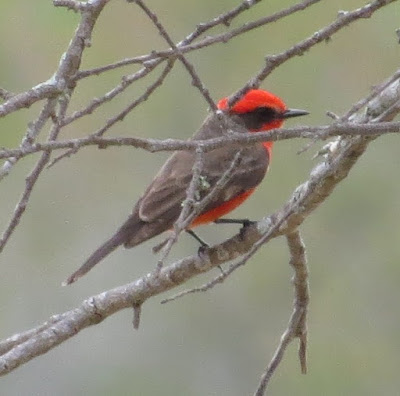 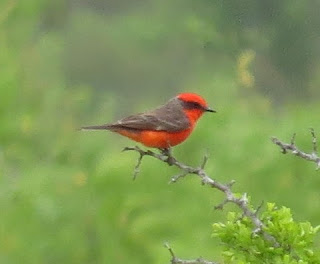 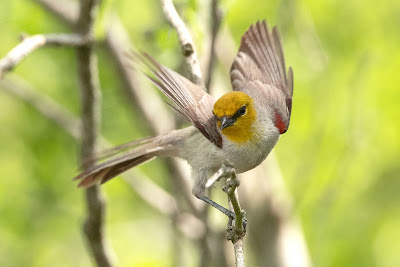 From there we went to Falcon State Park to kill time until it was time to head to Rancho Lomitas.  We ran into another birder who was RVing with her husband, and she alerted us to a nearby Ash-throated Flycatcher, another lifer for Jamie!  We also spotted a White Pelican for Tam, and after that we actually didn’t get very far before it was time to head to the Ranch.  But on the way out we were held up by a very cooperative Roadrunner! 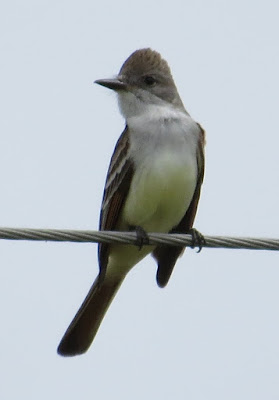 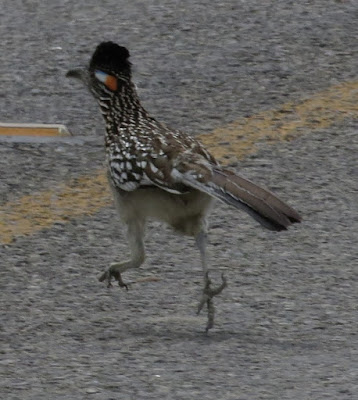 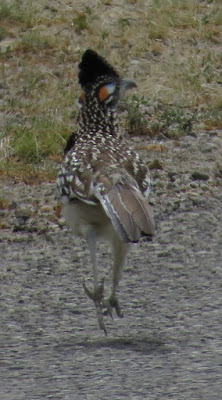 This was only my second time to Rancho Lomitas (a native plant nursery where one must call ahead for access), but since Scaled Quail was on Jamie’s “want” list, this is about the only place in the Valley where they’re almost guaranteed!  Jim and “Pal” (the little dog) met us at the gate and showed us to his little bungalow where he puts out the food, and sure enough, after awhile they came in and screwed up the courage to come right to the platter where Jim had put the feed out!  What looked like a little Mexican Ground Squirrel stuck his head out briefly, and a White-tipped Dove made an appearance way in the back, but the quail were definitely the stars!  With what little time we had left, we took the loop trail around the property and down to the pond, picking up Cactus and Bewick’s Wrens, a friendly Ruby-crowned Kinglet, Curve-billed Thrasher, both Inca and Common Ground Dove, and at Toni’s patio another Ash-throated Flycatcher!  (Toni and Benito actually own the property, and besides plants, also rent out casitas to folks…) 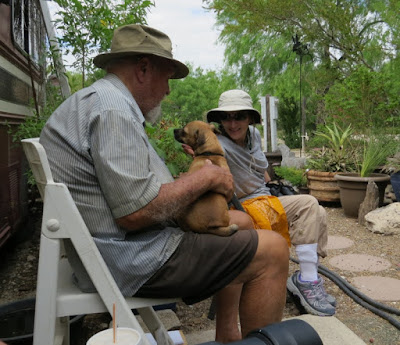 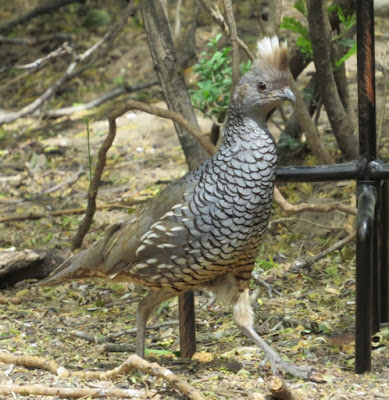 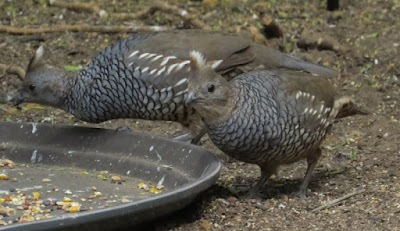 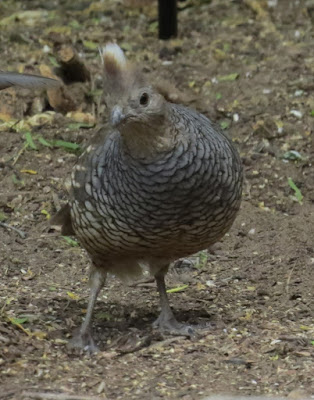 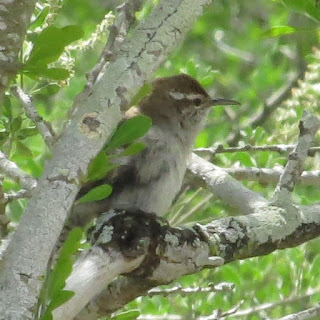 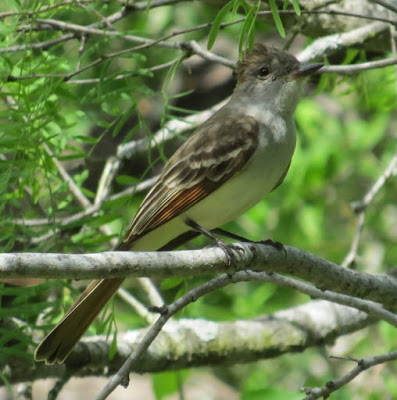 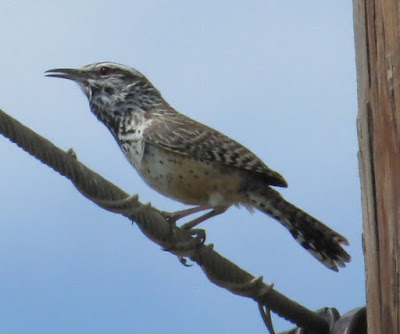 We headed home the back way (via FM 490), and I resolved to explore some of these dirt roads we were traveling for future road-birding routes; the habitat looked wonderful!