Hot Birding for a Canadian Couple

Gerald and Jennie were escaping the cold of Toronto by exploring South Texas for the first time, so since they had already explored several hotspots on their own (and the forecast suggested that Starr County would be the only area not experiencing high winds the day of our outing), it looked like Salineño and Falcon would be the places to go, as many of their targets could be gotten there.  So I picked them up where they were staying and we headed northwest.


It was truly a beautiful day, and we got to Salineño in good time, with a few other cars already there (and utilizing the Valley Land Fund parking lot seeing as the river was quite high at the boat ramp).  Things were actually rather quiet on the way:  no Chachalacas, Green Jays, or Altamira Orioles serenaded us as on previous outings – even the Cassin’s Sparrow was silent!  The Gray Hawk did whistle for us, but they were inaccessible back in the woods… 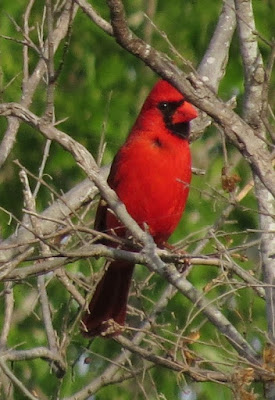 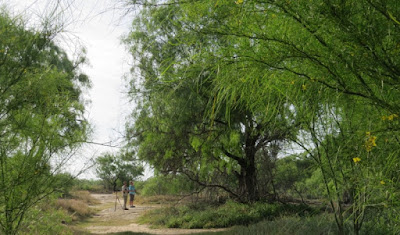 Gerald and Jennie on the "Seedeater Trail"

We heard the Ladder-backed Woodpecker, so I planted Gerald and Jennie near the nest hole in hopes the thing would come in while I went to the end of the trail to check things out.  A Clay-colored Thrush sang in the distance, and a suspicious bird in the dead tree on the island took off the minute I got my bins on him; I was hoping that wasn’t the one and only Red-billed Pigeon that was gonna show up! L  I didn’t hear any seedeaters, either, but while we waited a couple of Chihuahuan Ravens flew by, and a little bird up in the tree that got my juices going turned out to be a Lesser Goldfinch…  I took my charges up the hill in hopes of seeing the Ringed Kingfishers; they weren’t at their regular spot, either, and I was really beginning to sweat that all our targets were gonna elude us, when I suddenly heard the kingfisher coming in!  He actually landed on a perch between us and the trail we had just come up, so everyone got wonderful views!  It turned out the Rough-winged Swallows swooping around were life birds for Gerald as well, so we got good looks at those along with the Bank Swallows chattering overhead.  On the way back we scared up a Lincoln’s Sparrow that sat for shadowed views. 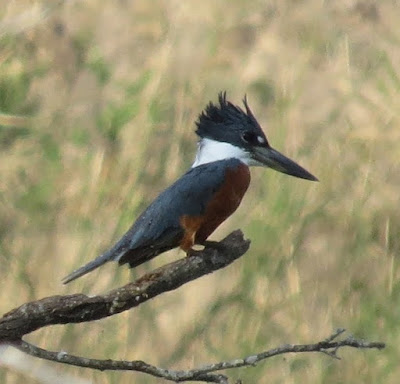 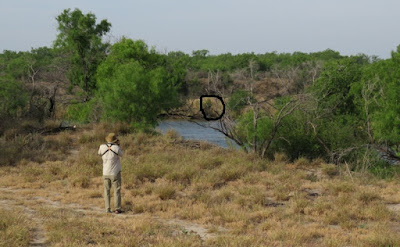 Gerald shooting said kingfisher (circled).  For the record, both photos were taken from the same spot!

Earlier, when we were climbing that hill, a gentleman caught up with us and told us that he had had an Audubon’s Oriole come in about a half hour earlier, so we were hopeful!  While coming back down the hill I was suggesting that we spend at least another 15 minutes at the end of the trail when I suddenly heard the Audubon’s, and there he was, on top of the mesquite!  Had we been on “ground level” we probably would not have been able to see him!  Once down at the bottom, what should be coming through the airwaves loud and clear but the seedeater’s sweet song!  Unfortunately it sounded like he was on the far side of the island, across the water, and after a lot of scanning, we just couldn’t find the little bugger before he apparently moved to an inaccessible area.  We decided to wait some more, enjoying the Turkey and Black Vultures and the resident Ospreys, but the only bird we added was a Summer Tanager that “pick-a-chooed” and shot into a tree.  Before leaving I decided to take one last look at the tree on the island, and there were the pigeons!!  Gerald got his scope on them, and we all got great looks!  Talk about the eleventh hour!  On the way back the Cassin’s Sparrow was singing, but he was distant and we never could find him…  While not a life bird, it had come to my attention that Eurasian Collared Dove was an ABA bird for Gerald, so we made sure he got some good looks on the way out! J


The Dump Road was next, and while it was starting to get a little breezy, we got some good birds, including a Pyrrhuloxia that came right in!  A Black-throated Sparrow only gave brief looks, but an Olive Sparrow gave longer (albeit more skulky) views.  At one of the fields I was hearing something that sounded like a White-tailed Hawk, then spotted two hawks dogfighting and then actually doing the Talon Lock!  I assumed they were the Whitetails I thought I was hearing, but a closer look at one of the birds proved it to be a Swainson’s!  (They do have a similar wing pattern…)  I couldn’t find the other bird to determine if we had an inter-species scuffle or not…  A Scissor-tailed Flycatcher was uncharacteristically uncooperative for photos as he scolded us from his wire! 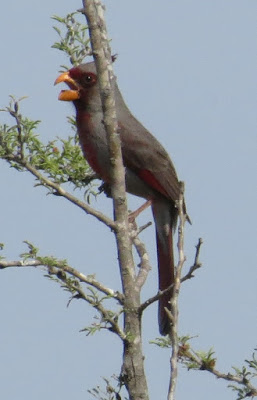 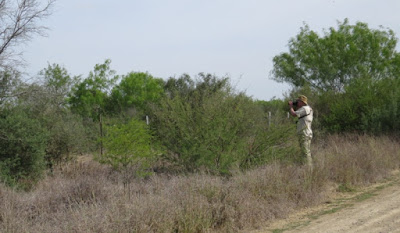 On to Falcon (Starr) County Park, where new birds came fast and furious:  a Lark Sparrow sat in the shadows but still allowed a picture,  and when I heard a Verdin we wheeled over to the area in hopes of seeing the little guy (which we did), but also another Pyrrhuloxia demanded attention!  On the south side of the park Gerald had a distant view of his life Loggerhead Shrike, and then I heard (and briefly saw) a Cactus Wren, so again I wheeled around while Gerald walked over, but in the meantime a brilliant Vermillion Flycatcher showed up on the wire!  A Curve-billed Thrasher took a drink from a spigot while all that was going on, and almost immediately after we headed on an Ash-throated Flycatcher posed on a pole! 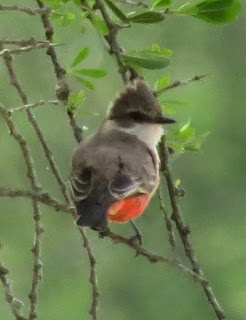 Female Vermilion Flycatcher (not the brilliant one described in the text...) 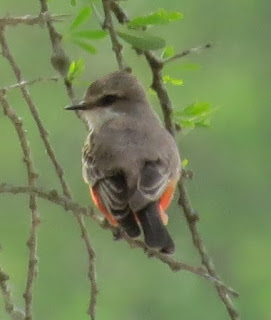 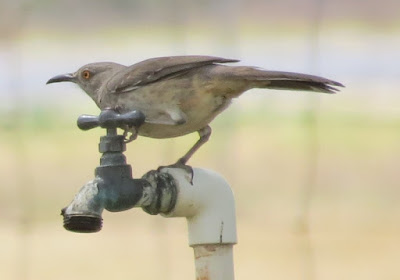 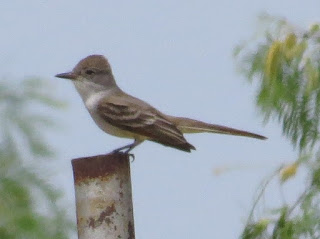 After finishing that up we swung into Falcon State Park, and while it was getting pretty warm by then, we added a few things:  this time the Black-throated Sparrow posed for photos on one side of the road, while a Curve-billed Thrasher posed on the other!  We happened upon a whole group of people with Big Guns at one point, and they had spotted a Caracara sitting in a bush!  Before long her mate swung in, she did an, “I’m ready, Henry,” pose, and they started the process of making little Caracaras! J  One lonely yellowlegs that struck me as a Lesser flew by as our only shorebird of the day… 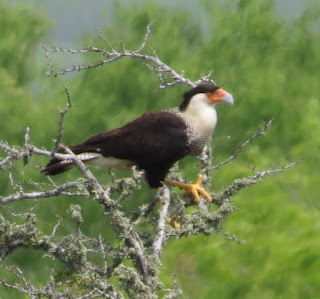 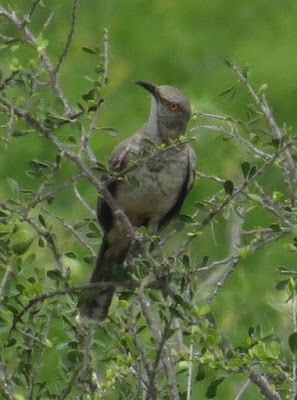 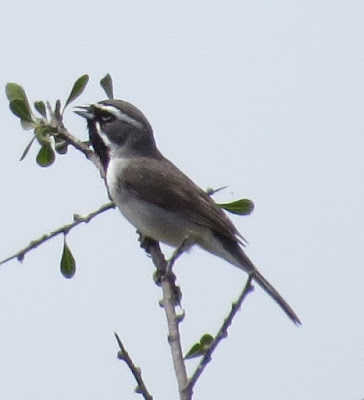 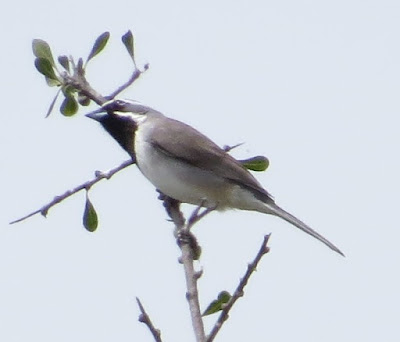 In the primitive camping area I heard a Bewick’s Wren that sounded visible but wasn’t, so I drove up next to the vegetation, and Gerald was actually able to get a look!  Another Verdin sounded “gettable”, so we all got out and tried to find him, but Gerald was distracted by another pair of Chihuahuan Ravens!  About that time the Verdin actually came out in the open (but flew the minute Gerald showed up, of course L), but then a Roadrunner cooed in the distance!  We drove over to the general area, and I tried to call him out, but he wasn’t falling for it this time, so since it was so hot I persuaded Gerald that we should move on…

Jennie poses next to "Heppy"

We bypassed “off-roading” in favor of checking the roads for more Roadrunners, but alas, they were all in hiding.  We did hear another close Verdin, so I swung around and parked while Gerald tried to shoot him, and in the meantime another gentleman stopped and asked where the Rock Wren was being seen!  I told him, but my charges agreed that with the temperature already getting into the 90s, we didn’t think any self-respecting Rock Wren would be out on the rocks then anyway…


We enjoyed what was probably the same raven pair in the picnic area, along with a Caracara that tried to share a tree with one of them!  A few scattered White Pelicans wheeled overhead, and at one point Gerald counted 18 altogether!  We couldn’t kick up anything in the hookup areas, so we decided to head home after that (but not before Gerald spotted a Harris’ Hawk overhead).  He was pleased, with over 40 lifers so far this trip, with more to come, he was sure! 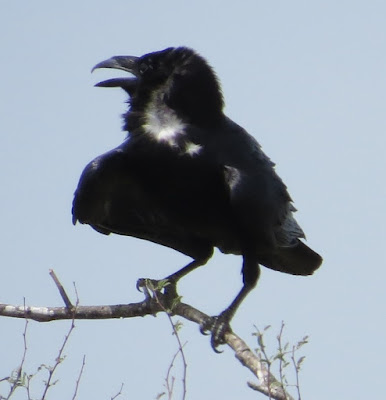 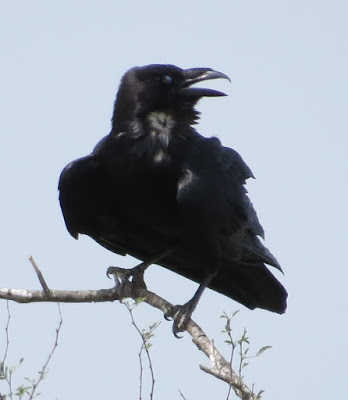 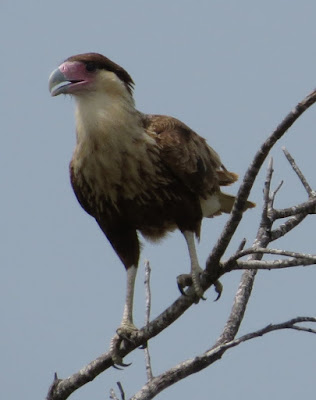 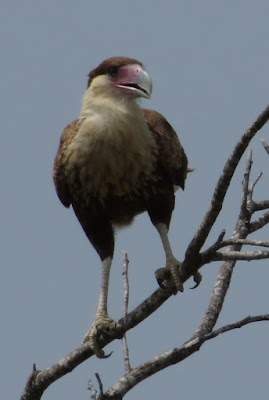