Gaby had contacted me with a very specific wish list, but after making up the itinerary and then discovering that his “lifers” were only countable if photographed, I made a command decision to head up to Salineño for the feeder show!  Many of his “wants” were regular visitors to the feeders, and even one that I initially gave him very little hope of seeing, the Red-billed Pigeon, was being recently reported, so there was hope!  On the way there we had a lovely Harris’ Hawk that posed for photos (my camera was still in the back, naturally L), so one new one was in the bag!


We headed to the feeders first, which uncharacteristically were dead quiet, but Glenn the Volunteer told us that the Sharp-shinned Hawk had just made a pass, so we would have to wait!  Generally all the target birds would come in within an hour, but this day we’d end up waiting until noon, and even so the target Olive Sparrow never came in to his regular spot but made a quick pass way in the back area!  Baldy the Audubon’s Oriole finally came in (along with his wife), and photo ops of the regular culprits abounded, including the Clay-colored Thrush, the Long-billed Thrasher, and the Chachalacas (Altamira Oriole and White-tipped Doves were additional targets that performed well), but the coveted Bobwhite never came in. 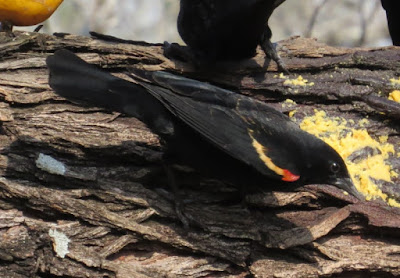 The Red-winged Blackbirds tend to hog the place... 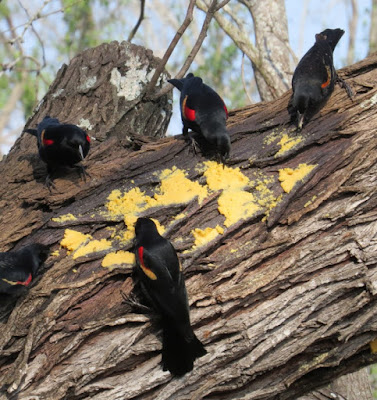 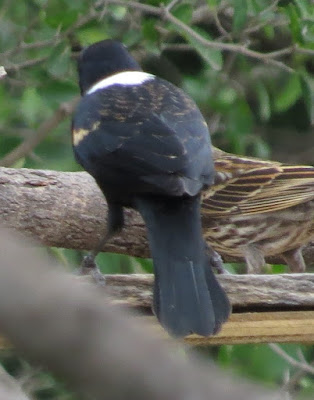 ...but everyone's happy to spot "Patch", the leucistic Redwing! 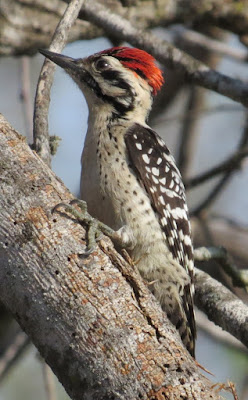 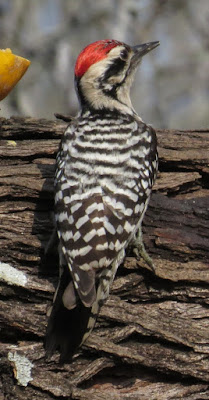 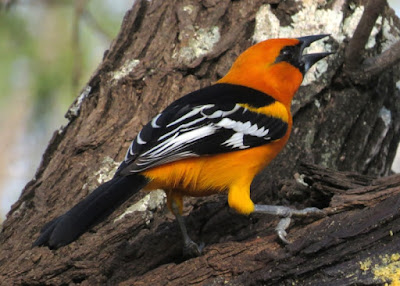 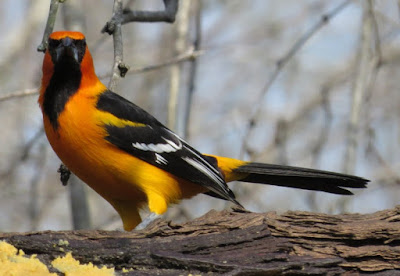 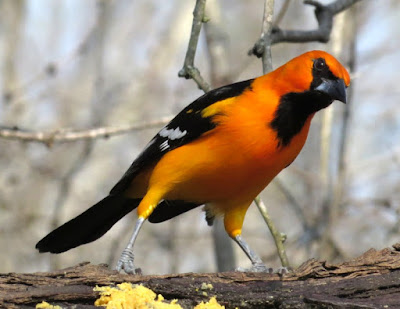 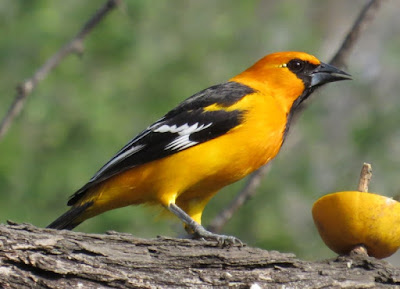 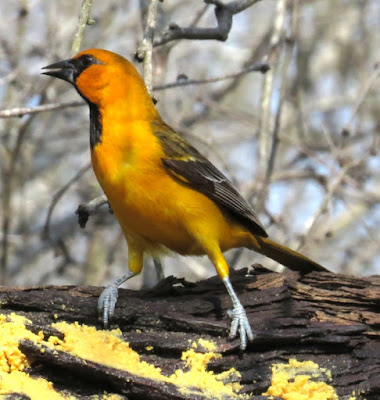 ...while the immature is duller still with a green back! 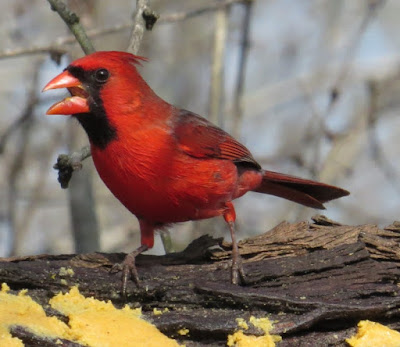 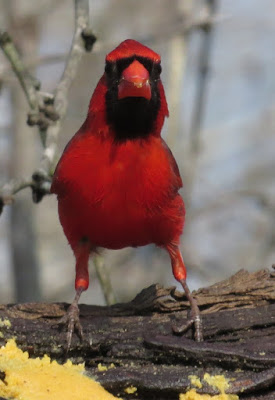 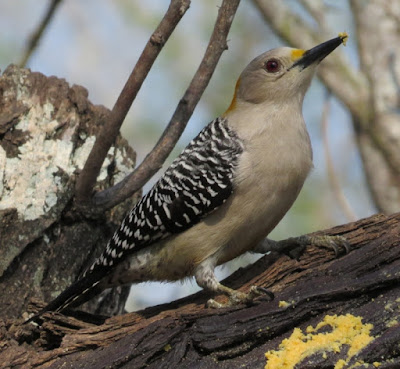 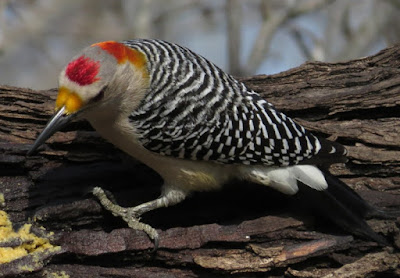 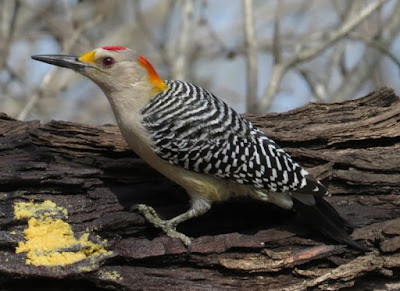 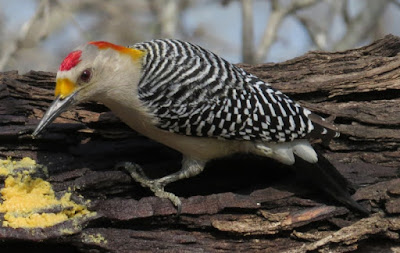 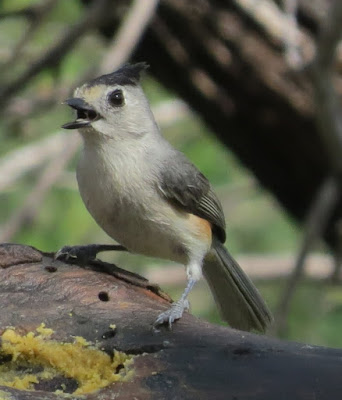 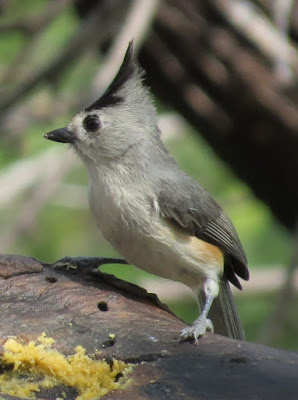 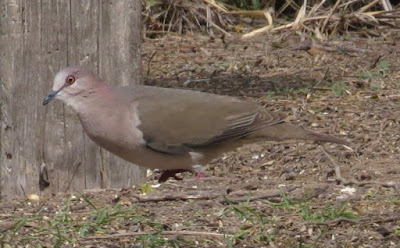 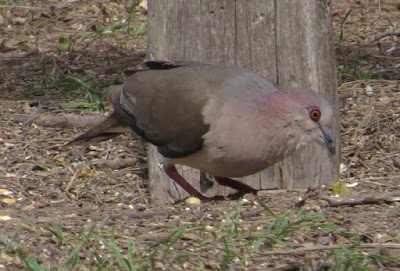 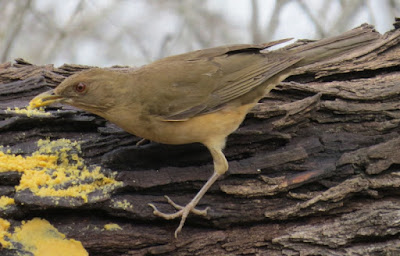 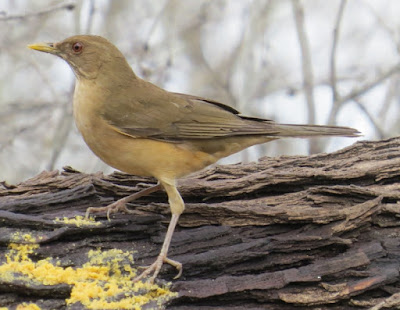 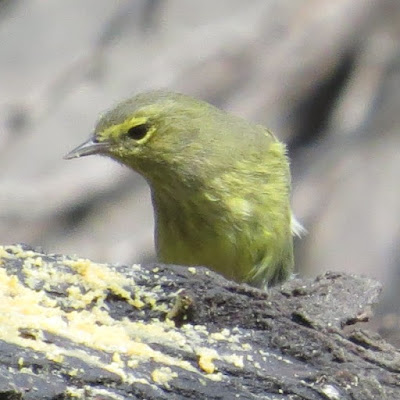 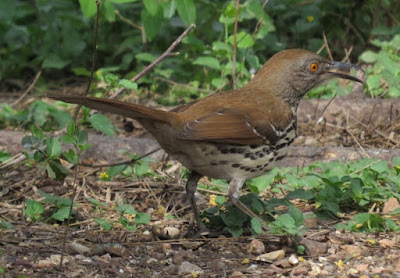 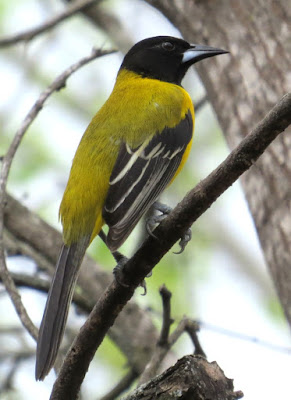 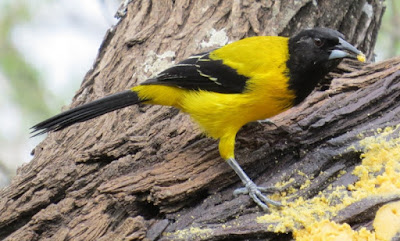 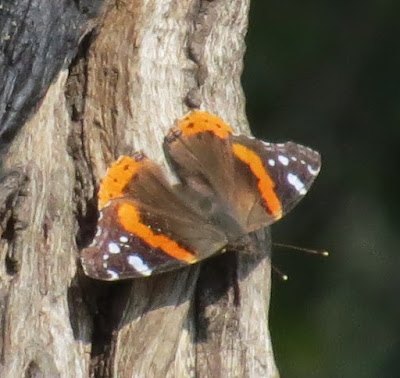 We finally headed down to the trail, but the Red-billed Pigeons “were there earlier” according to some, and of course nowhere to be found on our trek (the group before us admitted they were glad we didn’t see them, else they’d have to schlep all the way back down…)!  While heading up the trail Gaby went to examine a bush J and inadvertently flushed his Bobwhite!  Of course there was no way he could have photographed them, so they didn’t go on his list…  We went up the side road to try for the Cassin’s Sparrow that had shown for Julie and Richard, but it wasn’t to be…  We did hear a Ringed Kingfisher that Tovi (his wife) wanted to see, but it was hidden across the river and we never could find it…  Something landed on a twig that did not look like the Rough-winged Swallows that were also swooping and landing; it was pretty far away, and the poor photo I got suggested a female Vermilion Flycatcher (it wasn’t a seedeater at any rate…). 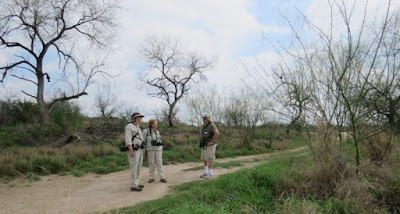 We run into another birder along the Seedeater Trail

We overheard some people at the feeders talking about a parakeet colony in Roma, so since we were going there for lunch anyway we decided to swing by the Roma Bluffs area with the windows down, but as I suspected, no parakeets were to be found.  We did finally find the Subway, however J, and had a great lunch (I had soup for a change)!


I was originally planning on taking my charges up Sparrow Road after that, but after a little interrogation, we realized he didn’t need Black-throated Sparrow after all, so seeing as it was warming up, I was beginning to think that an early morning run up Brushline Road might be better for those open-country birds he wanted (it’s a little tougher when the goal is to get a picture, not just see the bird, much less just hear it).  But as we bantered about what would be doable in the rising heat, we finally settled on trying for the Sprague’s Pipit at Anzalduas (which was his one and only potential target there).  We added some ducks to the day list on the way there (both in that pond near the Vet Cemetery and along the spillway wetland), and sharp-eyed Tovi spotted a Harrier on the entrance road!  After parking we picked up some Western Meadowlarks, and the Loggerhead Shrike serenaded us the whole time, along with a distant Eastern Meadowlark!  Since the pipit had been somewhat cooperative for Sandra and Chris, I was hoping they would play ball for us today, but they sent us on a death march all over that field; Tovi was a very good spotter, and we actually did see the little bugger stay put after landing for the briefest of seconds, only Gaby wasn’t able to shoot him before he slunk off into the grass… L  Gaby eventually was able to get some blurry flight shots; countable for his life list but definitely a BVD (Better View Desired)!  We probably provided comedy relief the Border Patrol guy sitting up on the levee… J


It was time to head back after that, giving them instructions in case they wanted to try for the Parakeet Show on 10th.  Upon dropping them off at the Inca Dove Cottage a Merlin was calling in the distance (there has been one hanging around the neighborhood), and my FOS Purple Martin gurgled overhead!  Since my own day list includes anything I see or hear from the time I leave my apartment to the time I get back, what should be screeching overhead as I walk through the gate but three Green Parakeets… L  (They might not have worked for Gaby anyway – they would have been tough to shoot!)