Made a return trip to Starr County today, which sadly wasn’t nearly as birdy as two days ago (it’s warming up), but Firmin (who lives in San Antonio and is no stranger to Texas birds, south or otherwise) had a handful of targets that were best gotten out here.  Pyrrhuloxia and Audubon’s Oriole were top on the list, so we started the day at Falcon State Park.


Thankfully they didn’t “need” a Roadrunner as this was only the second time coming to this park that one didn’t show!  But as we slowly made the rounds, the first of his handful of targets was strutting around in the primitive camping area:  three American Pipits!  A couple of times I was sure I was hearing a Black-tailed Gnatcatcher, but the perp never showed himself… L  Thankfully a nice male Pyrrhuloxia did eventually show (although the light wasn’t the best), and later a female popped up on the way to the picnic area in better light, and finally in the cabin area a little group of them fed on the ground, so Firmin was able to get some shots!  At the boat ramp area a young male Vermilion Flycatcher flycatched from the wire, and where we went “off-roading” down into the overflow area we scared up a Great Egret and what we thought were just a couple of Least Sandpipers, but more just kept appearing until we had about a dozen!  Up in the “circle” we had a nice feeding flock of Butterbutts, Orangecrowns, and a single Ruby-crowned Kinglet, but Marie got on a sparrow that kept giving us fits until it finally came out into the open, only to reveal itself as a female House… 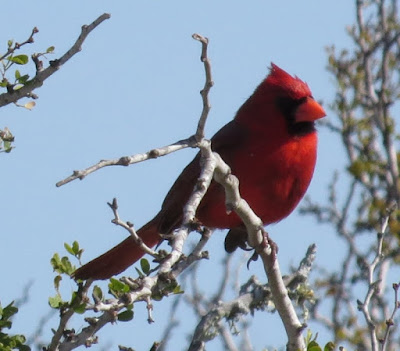 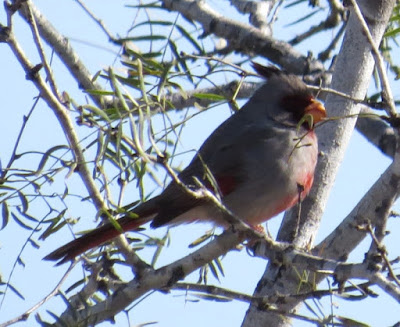 ...and his close relative the Pyrrhuloxia! 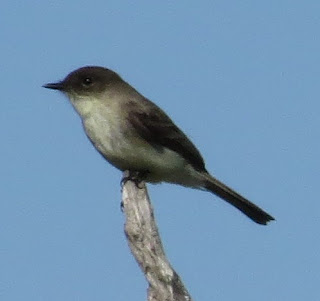 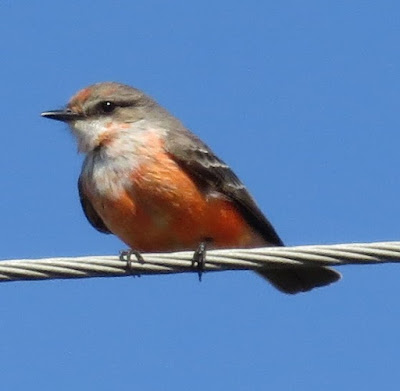 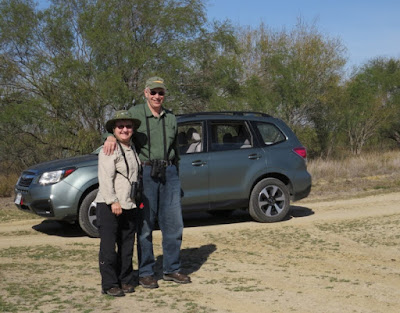 Marie and Firmin pose with "Heppy" in the "circle area" 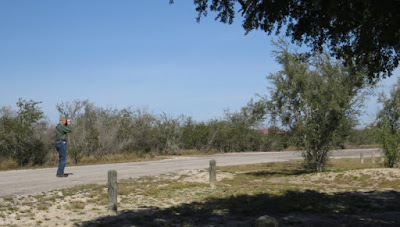 Firmin tracking down his Pyrrs in the cabin area... 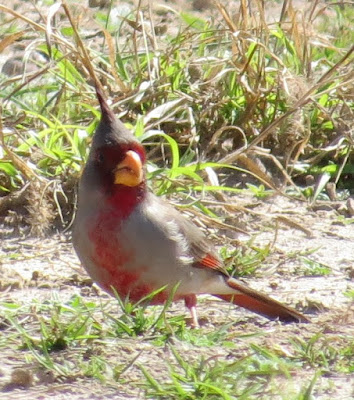 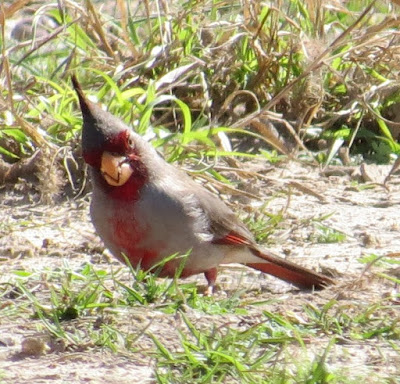 "And just what do you think you're lookin' at?!" 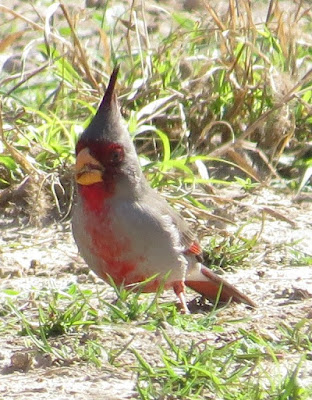 In the picnic area the young Harris’ Hawk was back on his light pole, but the only thing I could pick up in the lake were a couple of Pied-billed Grebes and a Coot.  In addition to the aforementioned Pyrrs, the Caracara posed on “his” pole in the cabin area, and as we crawled through the hookup area, we mused on which RVs were “drivable” or not (some, we concluded, were just too darn big for our comfort – not to live in, but to take on the road)!  The only new bird we picked up in there was a really pretty Western Meadowlark feeding under a shelter, so we headed out and continued to Salineño. 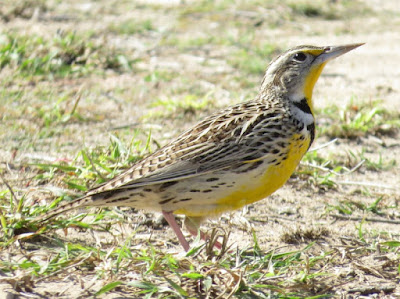 Presumed Western Meadowlark coming into breeding plumage; the yellow extends further up into the malar region than on Easterns.

We just missed the tour group J as we headed in and took our places!  Merle and Lois’ rescue doggie Chamois (found out that was the correct spelling for that cloth you wipe your car down with – the word comes from a European goat) came out and demanded some loving (and almost demanded Marie’s lunch as well J), but it wasn’t long before the Clay-colored Thrush came in and delighted those few of us there!  The regular crew was there (Kiskadees, Altamira Orioles, Green Jays, titmice, woodpeckers, and of course the blackbirds), but we had to wait awhile for the Olive Sparrow, Long-billed Thrasher, and even Baldy the Audubon’s Oriole; turns out he was being rather intimidated by the blackbirds going after the PB mixture!  The young Hooded Oriole (another target) came in to a close nectar feeder, so everyone got great looks at him!  There was a mob of Chachalacas there today, and at one point what Lois called a “chorus line” of them were all lined up at the bath!  A few false alarms sent everyone scattering, but they would shortly return, at least until the Sharp-shinned Hawk made a pass for real and really shook up the crowd, especially after he caught a blackbird (it all happened so fast I didn’t even see the hawk)!  Shortly Merle and Lois’ friends from Minnesota showed up with their three sled dogs; Catcher was just a lover and didn’t wanna leave my side! J 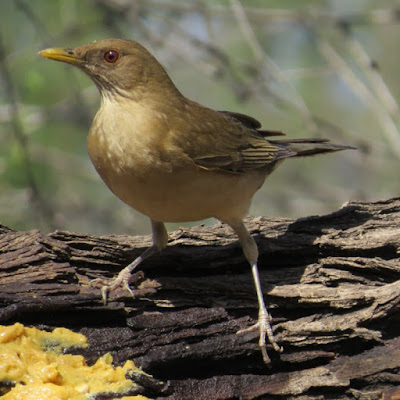 The Clay-colored Thrush comes in right away! 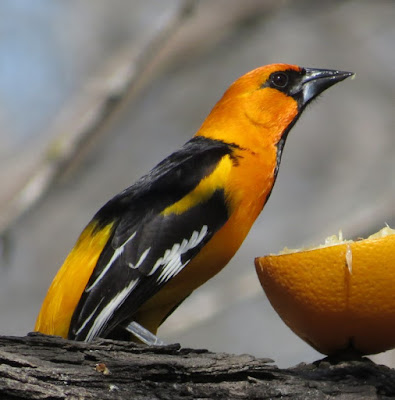 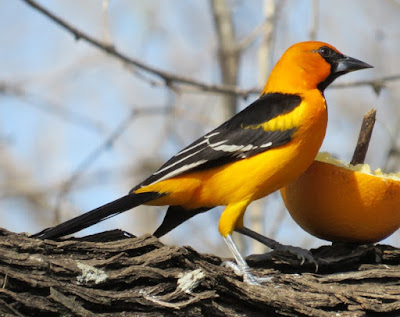 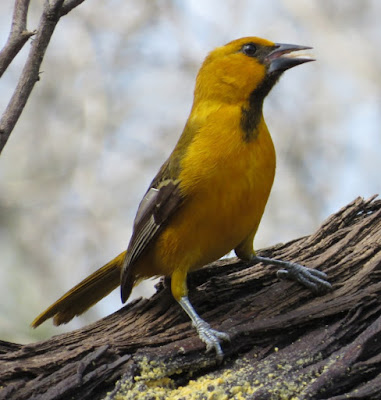 The young Altamira is back 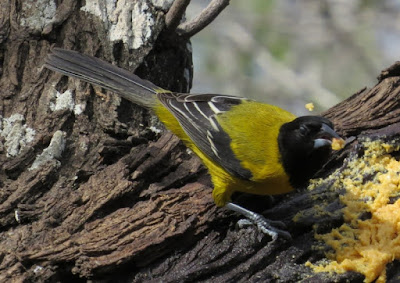 An Audubon's Oriole grabs a quick bite before the blackbirds chase him off (note the flying piece of PB mixture...)! 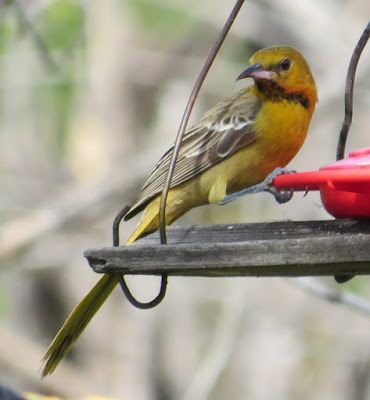 The young Hooded Oriole isn't intimidated at all! 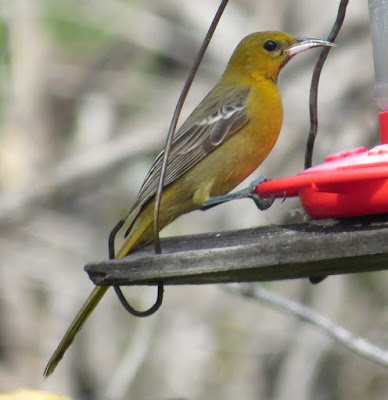 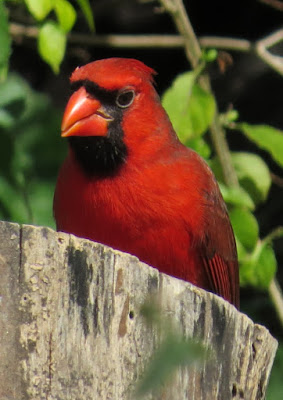 Cardinal with crest down... 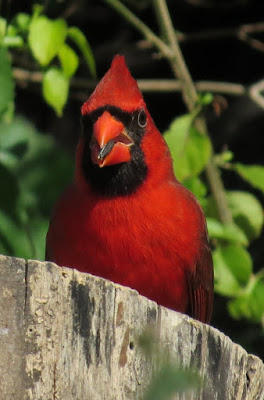 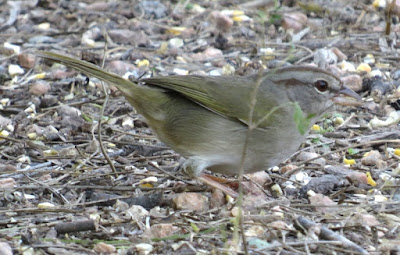 The Olive Sparrow sneaks out for a bite... 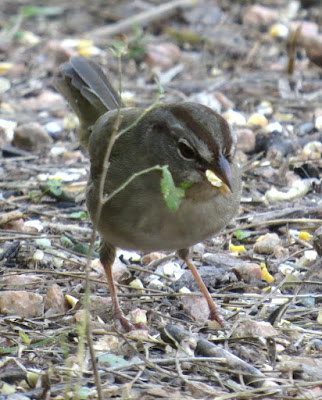 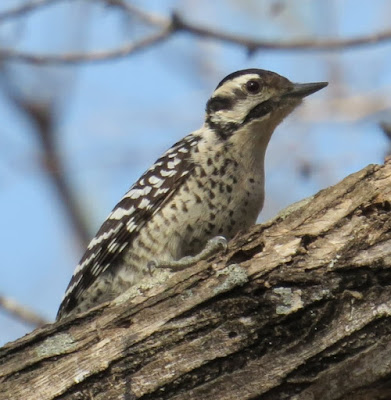 This time Mrs. Ladderback is in for a snack! 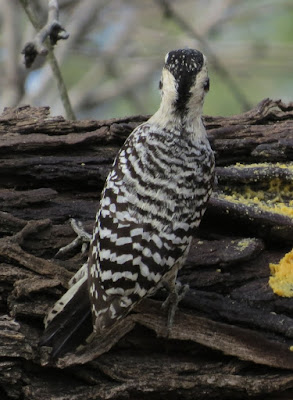 Nice look at her zygodactal feel and back pattern 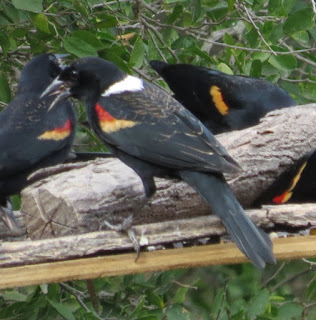 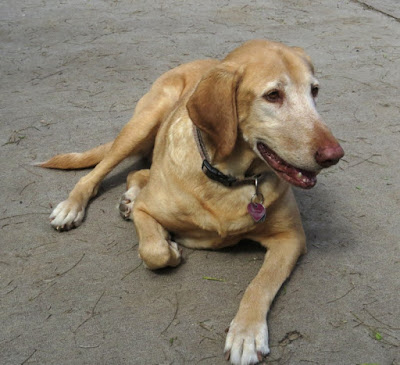 Chamois greets the guests and then supervises Lois as she restocks the feeders during a lull! 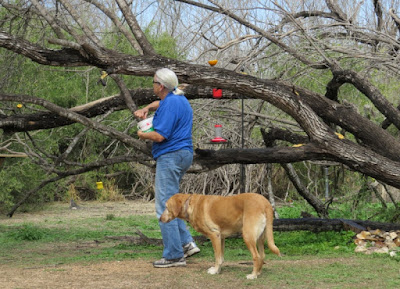 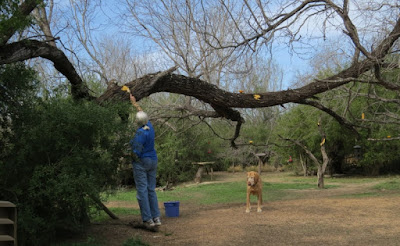 Firmin figured he had gotten about as good a picture of the Audubon’s as he was gonna get (Baldy didn’t stick around very long), so with what time we had we went down to the river to see if anything was gonna fly by (and the report from the group was that no seedeaters showed).  It was pretty quiet; a distant “Mexican” Duck took off so that we could see the nice white borders to the speculum, and a young White-tailed Hawk soared in the distance, but besides them and the ever-present Ospreys, it was pretty dead.  We did a “changing of the guard” with my friends Ann and Rick and another gentleman who had just shown up; they had visited Falcon County Park (right next to the state park) and had a nice selection of sparrows.  But it was time for us to go, stopping at the Jack in the Box in Roma for some iced mocha and an illegal Oreo Cookie Shake… J