Keith had asked me if I would take his cousins Paul and Chris from England out on Friday, which I was thrilled to do!  I was even more thrilled that the rain threat went away, but it was windy as all getout!  L  We started on Old Port Isabel Road and had two nice White-tailed Hawks (including one I would call a “subadult”), but no falcons…  The wind was so bad that we just stayed in the car until I heard seeps or chirps, and at one such place I strongly suspected we had a Cassin’s Sparrow, so we did get out for that one!  A little coaxing finally brought him out only feet away from us, and I was kicking myself for leaving the camera in the car!! L  A couple of Sandhill Cranes flew across the road high up, and further on a lovely singing Eastern Meadowlark posed.  We had great looks at roadside Long-billed Curlews, and a Sedge Wren called at the regular “dicey” spot.  At the canal we had a spoonbill that eventually flew right over our heads, plus a few ducks and herons.  There had been reports that the road was closed at the construction site, but not only was it open, but there were no trucks in sight!  We watched a couple of birders in a low slung white car pass us, then come back – that north end of the road is no friend to the faint of heart! J 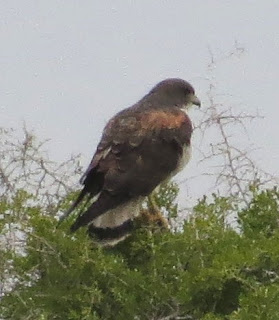 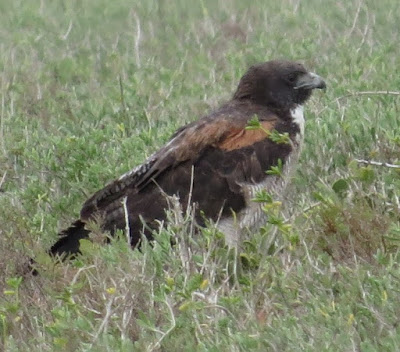 Not quite adult bird 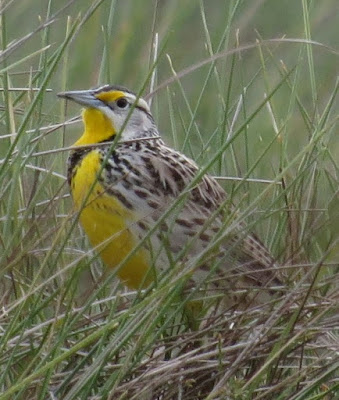 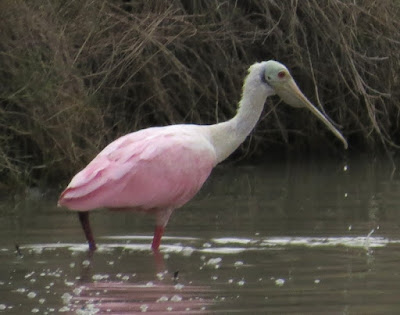 We dipped on the falcons at the regular spot along SR 100 as well, but the big shock was the Kite Fest on the Island!  (It was a perfect day, actually, with that wind…)  They were even directing traffic going in, but thankfully the revelers had the north side of the Flats, and the best birding area was wide open; after explaining to the parking attendant what we were doing she insisted on seeing pictures! J  Making the rounds there we logged Piping, Semipalmated, and Black-bellied Plovers (I admitted that “Grey Plover” is actually a better name for the latter), a nice comparison of a Gull-billed Tern next to a Forster’s, White Pelicans holding their wings open, and Laughing Gulls hanging next to the open window and eating out of my hand! J   We dutifully showed the gal the pictures and gawked at some of the bizarre and fascinating kites they were flying! 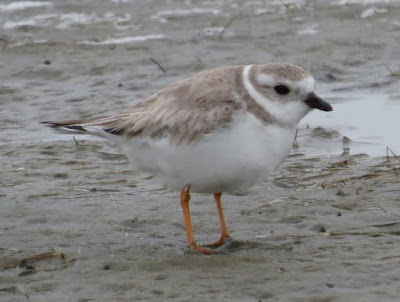 Piping Plover that escaped the banders... 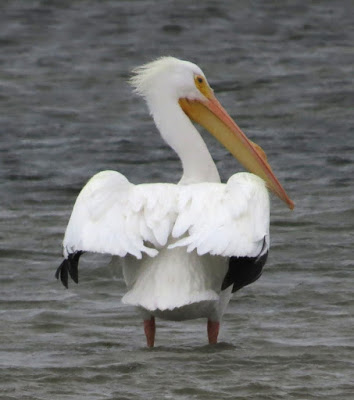 White Pelicans holding their wings out against the wind; this bird is starting to grow his breeding-season bill horn! 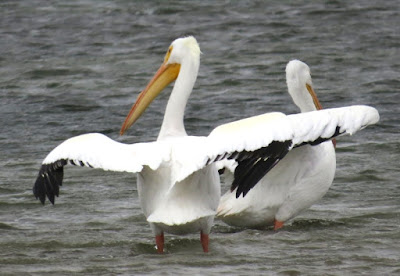 Laughing Gulls waiting for a handout... 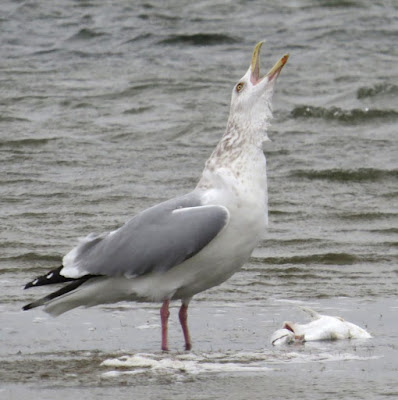 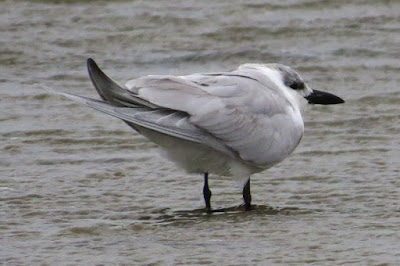 Two similar birds in non-breeding plumage:  Gull-billed Tern (above) and Forster's Tern (below) 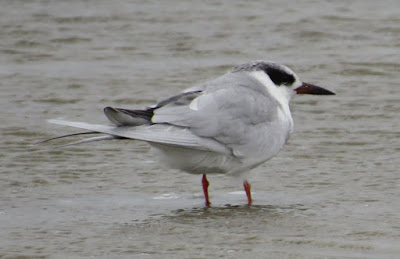 Many creative kites on display during the Kite Fest! 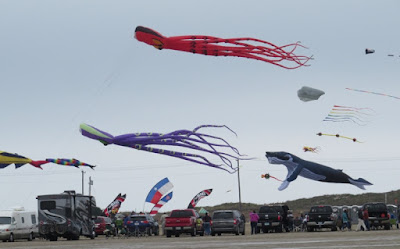 Songbird action at the Convention Centre was understandably slow, but we did have an Eastern Phoebe and lots of Yellow-rumped Warblers (aka Butterbutts).  The boardwalk had a nice Green Heron and the usual ducks along with a heard-only Sora (all this with Vaughn-Williams’ Variation on a Theme of Thomas Tallis emanating from the Kite Fest; sounded like they had a contest going on…).  The Birding Center had tons of Butterbutts catching insects, a Northern Waterthrush pinking close, and a Great Blue bullying a Great Egret!  The Reddish Egrets put on a wonderful show with their necks in a frizz (we think one may have been an interloper), and Chris actually spotted the Clapper Rail!  We added a snoozing spoonbill and close looks at Blue-winged Teal, including one that had a white design on the head!  The whining gallinule was just clucking today…  On the way out we almost literally ran into a fearless Mockingbird that stayed put even as Chris and Paul posed with him! 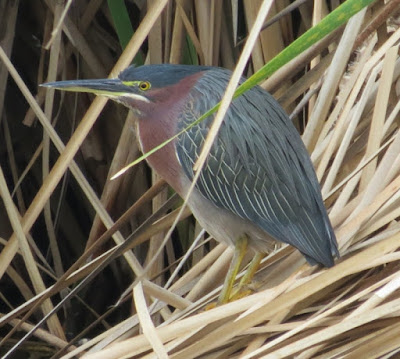 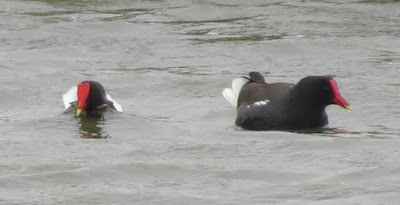 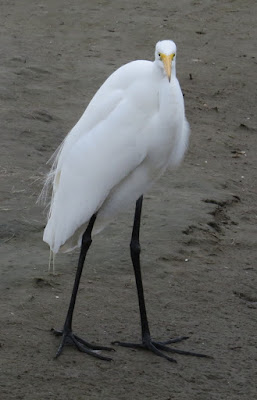 Great Egret that inched too close to a Great Blue's fishing hole... 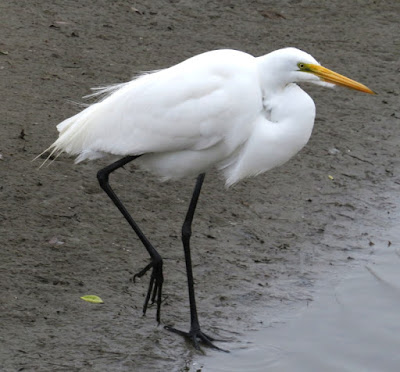 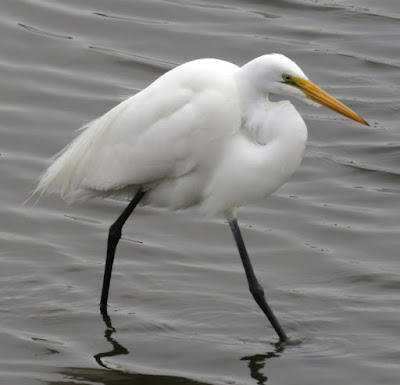 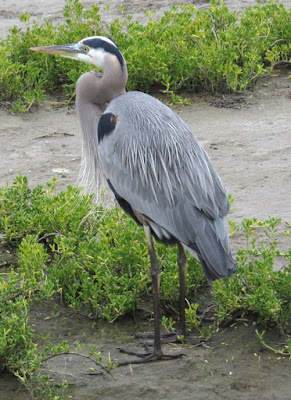 Great Blue Heron that bullied out the egret 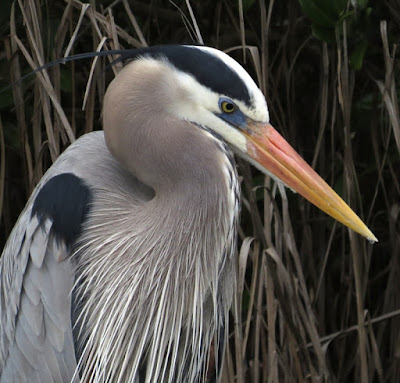 Close-up of another Great Blue 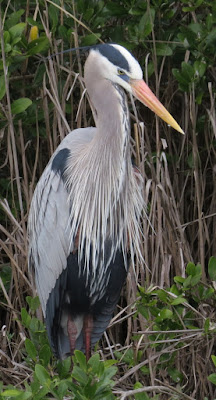 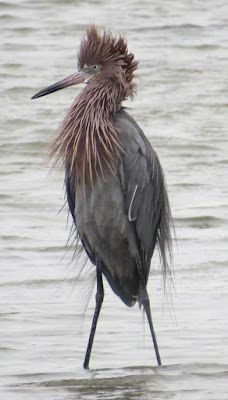 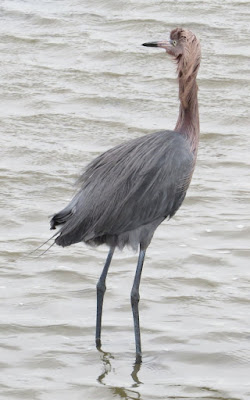 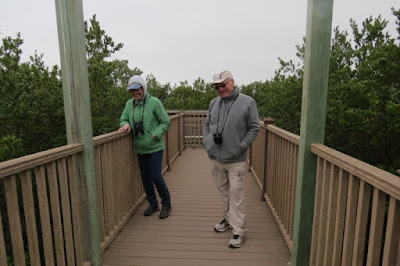 Chris and Paul on the boardwalk 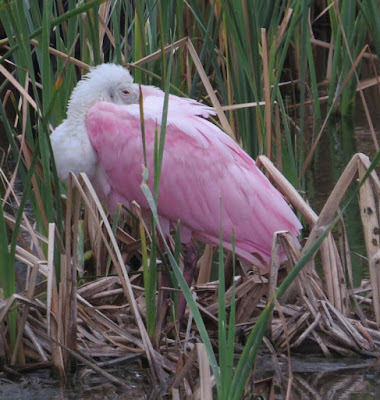 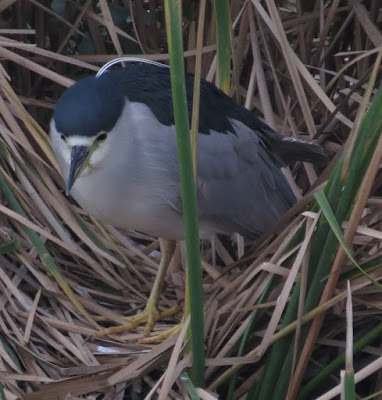 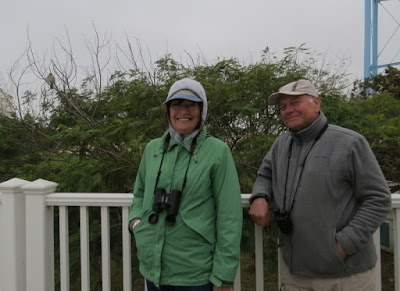 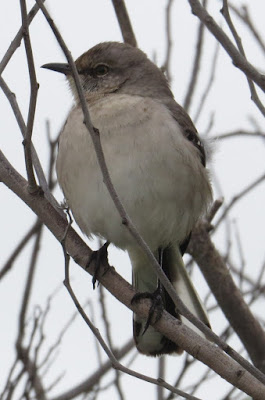 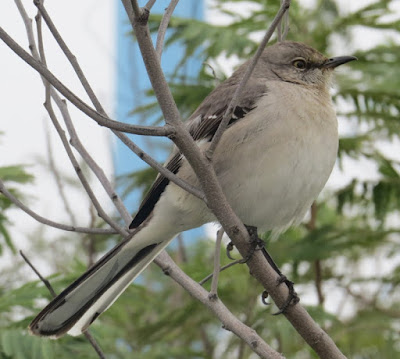 Stopped at the SR 48 boat ramp for the skimmers, and also added Ruddy Turnstone and the oystercatchers to the day list.  We actually had time to stop at Tiocano Lake (along with a group from Colorado J) and heard plenty of King Rails; the big surprise was a flock of White-fronted Geese across the way!  (A local pulled up and said, “You shoulda been here yesterday!”)

Skimmers at the SR48 boat ramp

Checking out both sides of Tiocano Lake 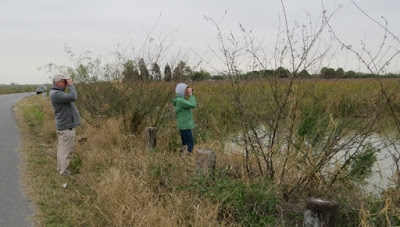 We decided to head on in after that with 84 species for the day.  Bird List: