Of Green Jays and Green Butterflies

The next day I had a (pardon the expression) “kill two birds with one stone” idea:  the girls still wanted to see Green Jays up close and personal, and the best way to do that is to go to a place where they’re being fed!  And one of the few places that do feed this time of year is the National Butterfly Center, plus the mega-rare Mercurial Skipper was still being seen, so when I suggested that (plus it’s relatively close to the Inn), they were all for it!


As per usual, I took them to Bentsen State Park first, where a group of their beloved Green Jays was right there in the parking lot!  On the way in I dismissed this long-tailed thing on the wire as a grackle, but Michelle called me on it:  in the early morning light it looked black, but it was actually a Chachalaca!  That was a first! 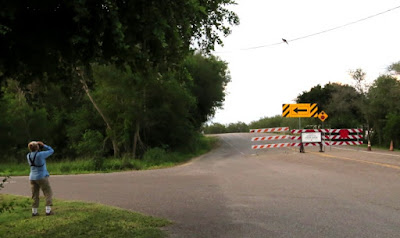 Michelle checks out the Chachalaca on the wire (below also) 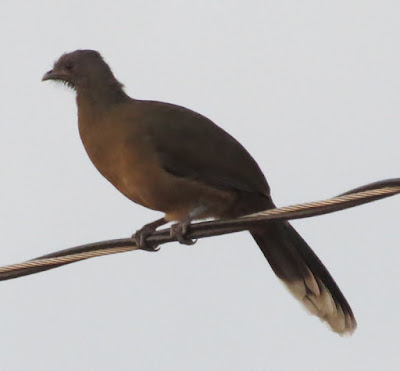 The office happened to be open, so we checked in and then headed to the garden area.  We did have a Kiskadee, but it was rather quiet; the most exciting thing was a torpid Gulf Fritillary sitting on the sidewalk that I coaxed onto my hand (he showed his dorsal side nicely) before he flew off!  I was getting ready to lead them out when I heard an Altamira Oriole, so back we went, and thankfully we found the thing and got great looks in the sunlight!  On the second try to the main road what I thought was a small hawk flushed and landed in front of us, but it turned out to be a Screech Owl!  I was able to get him in the scope, but only one of the girls (Clare, I think) got a look, as someone coming from the other direction spooked him. 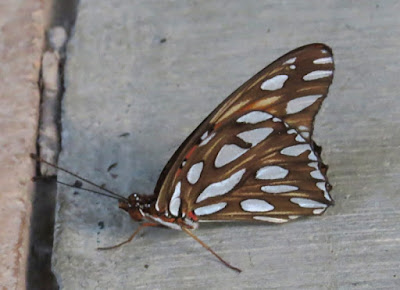 From there we headed up to the canal, where way down at the bridge a kingfisher of some kind was sitting (I couldn’t even discern the color from that distance)!  So we walked down a bit (about parallel to the building’s south breezeway), and from there I could just make out the rusty belly of a Ringed Kingfisher!  A Spotted Sandpiper was also bobbing along the wall, and while Michelle got distracted by another Chachalaca in the breezeway, I heard the braat of a Green Kingfisher, and sure enough, he went darting by and didn’t stop until he, too, landed on the concrete bridge!  So for a while we had both kingfishers in the same scope view!  (Interestingly the initial Green was a male, and the next time I looked he had been replaced by a female…)  I took a picture from there just for kicks and grins to show off the zoom on that little Powershot; it wouldn’t have won any prizes, but it was about the same magnification as the scope!  After going down the bank to look at the Chachalacas in the garden, I heard a Black Phoebe singing, so up we went again, and he in turn flew all the way down to the bridge over the road, so off we trudged to get a look at him, albeit not the best look in the sun!

Lousy shot, but we were a LONG ways away from this Ringed Kingfisher on the bridge, just to show the zoom range on the Powershot!

It was getting close to 9:00 and I didn’t see any need to schlep all the way to the resaca, so we headed back to the car, when the Chachalacas suddenly started chorusing (one pair was even close enough for Clare to get a recording)!  We finally dragged ourselves away and over to the Butterfly Center, where more Green Jays greeted us in the parking lot!  After admiring the bushes full of Queens (and one Soldier) we checked in, and Luciano showed us where the skipper and also Saturday’s Malachite (the "green butterfly" alluded to in the title) had been seen.  So we checked those crucitas first; no Mercurial, but we had lots of the common butters in addition to a female Roseate Skimmer and Black Setwing in the ode department.  I got excited about showing the girls a Zebra Heliconian until I remembered that it was Florida’s state butterfly, so they had probably seen plenty! 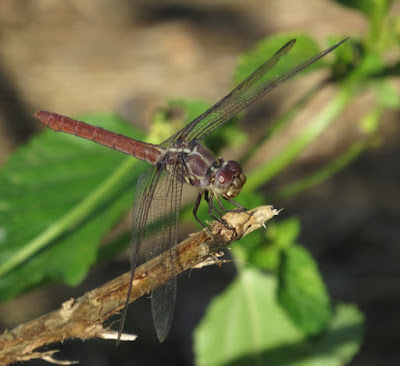 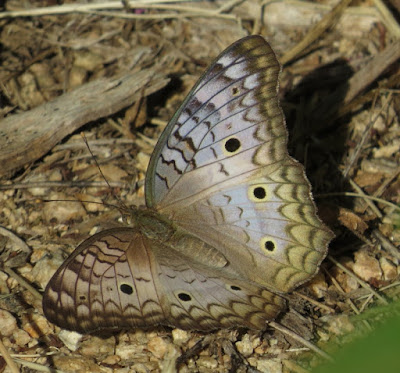 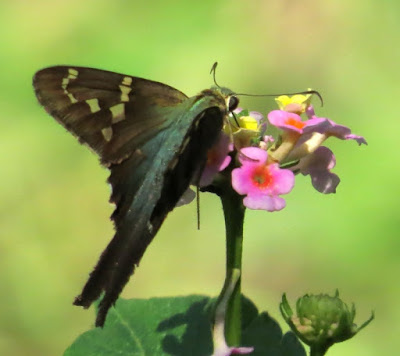 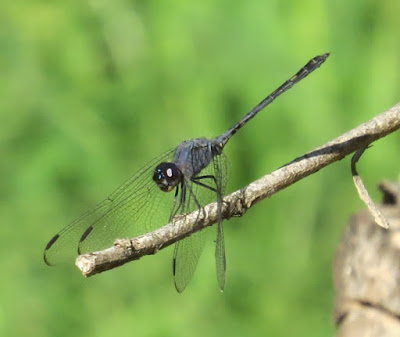 
They were anxious to get to the feeders, so we walked down there, enjoying Tawny Emperors ODing on the butterfly bait, a posing Mexican Bluewing, and a Pipevine Swallowtail showing off the dorsal side this time!  One sunny spot had both Julia and Zebra Heliconians posing, and they were dutifully creeped out by the screech owl box taken over by the bees!  Shortly we arrived at the feeders and probably spent 20 minutes there, enjoying (as promised) tons of Green Jays playing around, grackles making crazy noises, and more chicken-like Chachalacas poking around.  But having patience paid off, as shortly a Clay-colored Thrush showed up and showed off, a White-tipped Dove crept out in the open, and two cute little Hispid Cotton Rats delighted Michelle especially! 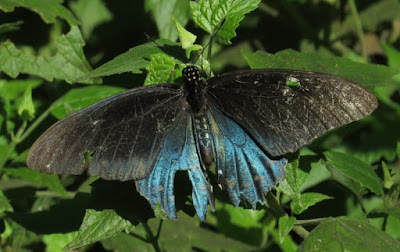 Pipevine Swallowtail that had a narrow escape... 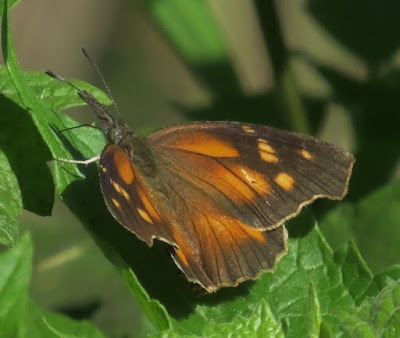 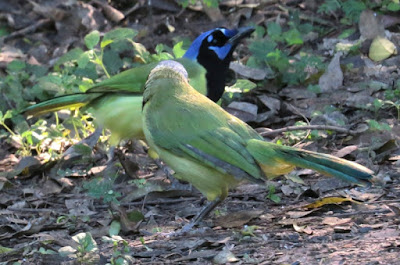 Green Jays at the feeding station 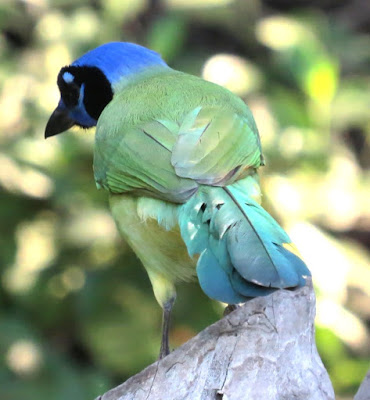 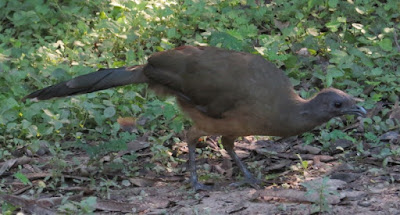 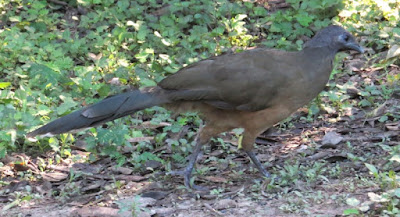 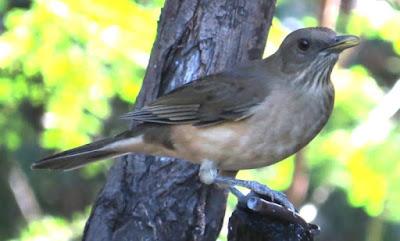 Clay-colored Thrush, once considered a mega-rarity and now a backyard bird! 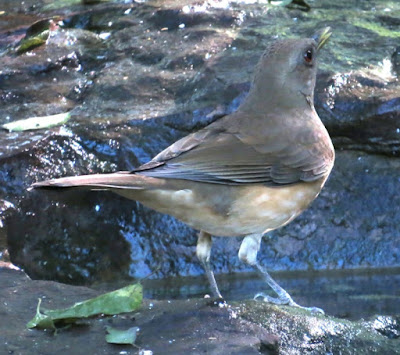 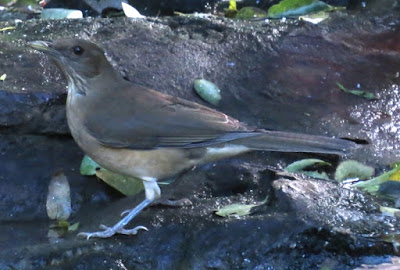 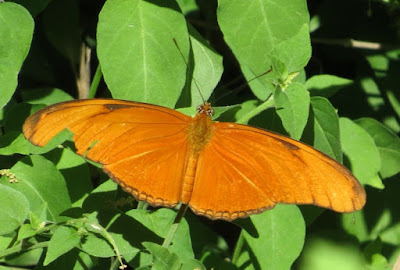 Michelle making friends with the Chachalacas (below) 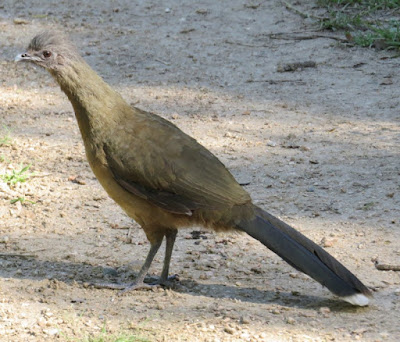 After dragging ourselves away we enjoyed more butterflies, and on the way to the “Malachite area”, Michelle discovered Spike the Tortoise, who came running (relatively speaking) over to meet us!  I can believe the stories I had heard of his daring escapes from his enclosure as he darned near climbed over the fence to see us!  No Malachite, but the girls were impressed with a solar-powered water feature that was running.  About that time we had to head back to the Inn, so we managed to get back to the car without getting too distracted (still no Mercurial at the crucita)!  Oh, and as an aside, this talk of State Butterflies got me curious, so went on Google and found out that Texas’ state butter (as is the state butter of a dozen other states, it seems) is the Monarch! 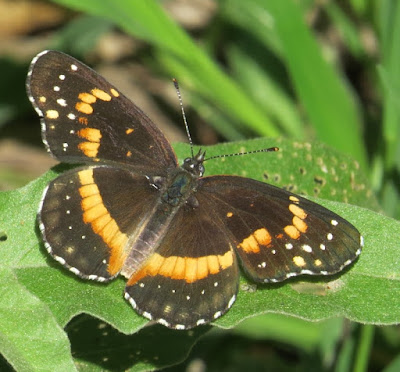 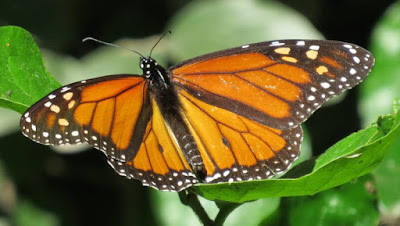