In Search of "Western" Birds

Like so many visiting birders, this was Rudy and Amy’s first time to Texas, but by the time “Guiding Day” arrived, they had already been able to visit many of our local hotspots and take advantage of the bird walks those places have to offer (they had some fun stories to tell J), so most of the Valley Specialties were already under their belts!  So I tossed the prepared itinerary J, asked them what they still needed to see, and that paved the way for a day birding the back roads of La Sal del Rey!


Their remaining target birds had a decidedly “western” flair, so we headed up and started on South Brushline Road, north of FM 490.  A cold front had come through, so the temperature was a delicious 68 degrees with a stiff wind, so many of the targets would call from the brush but were reticent to come out.  Pyrrhuloxias happily chattered and Verdins chirped, but remained stubborn.  Thankfully a White-tailed Hawk banked in the distance, reminding Amy of their Bald Eagles up north with that beacon of a tail!  A much smaller Sharp-shinned Hawk also decided to bat low overhead, giving great looks.  Some immature White Ibis and later a group of White-faced Ibis flew by, and while we were tracking a flock of blackbirds I saw a couple of large birds flying in the distance; when I realized what they were I was stoked – the Sandhill Cranes were back!  We later heard some calling, so that was a wonderful experience!  At one point I heard honking and jumped out of the car:  a small flock of White-fronted Geese were going overhead!  Winter had arrived (theoretically)! J 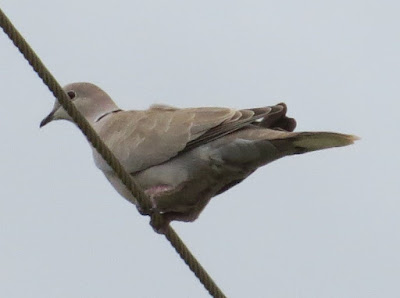 Collared Dove was an exciting find for my Pennsylvania friends 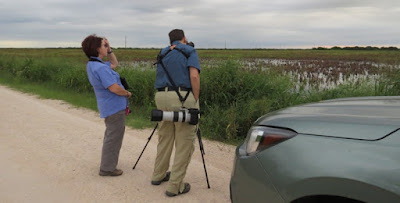 Amy and Rudy check out the wetlands 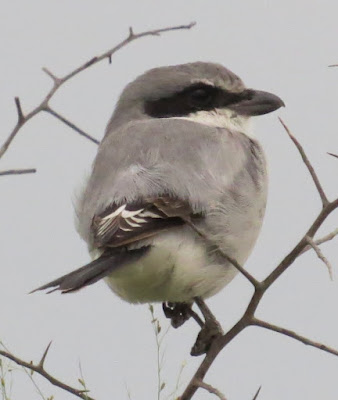 Loggerhead Shrike fluffs himself up against the cold 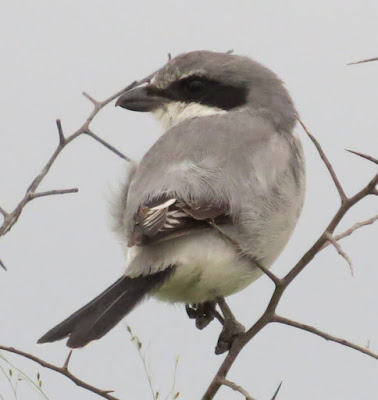 There weren’t many wet spots along the road, but what there was usually had at least a handful of Least Sandpipers poking around in them.  Crossing SR 186 we continued north, and had great encounters with Caracaras, Harris’ Hawks, and even a single Broad-winged Hawk.  Bobwhite would explode from the grass along the side of the road but unfortunately never landed where we could see them.  We tried for the Ferruginous Pygmy Owl but couldn’t even find any scolding birds; we had great looks at Black-crested Titmice, Orange-crowned Warblers, and House Wrens instead.  One Pyrrhuloxia finally deigned to land on the wire, but my charges didn’t get a decent look before he took off… L  Heading into the northernmost section, we had some nice looks at Lark Sparrows (another life bird), but I was sweating the normal stuff I usually get along there such as Bewick’s and Cactus Wrens, Roadrunners, and Black Vultures, but finally one of the Verdins decided to cooperate and everyone got a great look at the yellow head and even the rusty shoulders!  Actually, the most interesting sighting along here wasn’t a bird at all, but a little Ribbon Snake chilling out in the road!  (We eventually encouraged him to move into brush so he wouldn’t become road kill…)  The farm pond at the end of the road had a yelling Greater Yellowlegs and some Killdeer, but we managed to get scope views of a couple of Savannah Sparrows that had been hiding by the road and then migrated to a mesquite!  What was really amazing were the numbers of Scissor-tailed Flycatchers staging for migration:  there must have been hundreds, and they lined the wires like so many swallows; it was amusing to see all these tails poking out from the wires like a line of sticks! 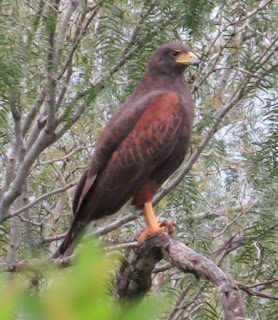 One of hundreds of Scissor-tailed Flycatchers getting ready to migrate 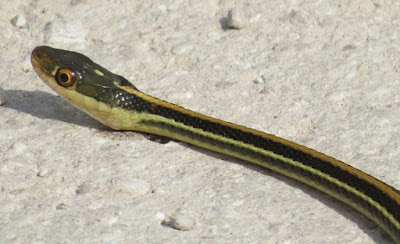 Ribbon Snake on the road 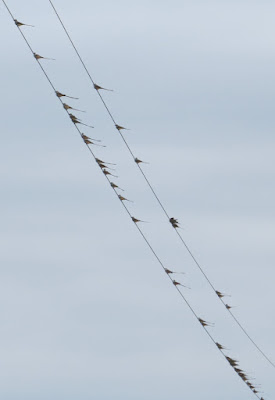 Small portion of the mob of Scissortails 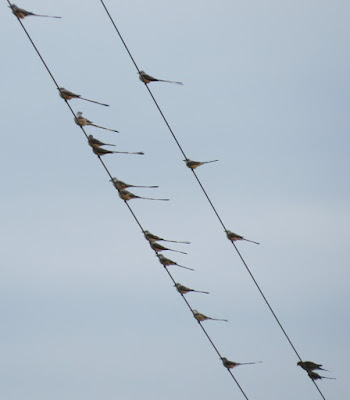 At that point we were getting hungry, so we made a run to Raymondville for lunch, getting a great glimpse of a White-tailed Hawk with a snake on the way, then returned to the La Sal route via CR20, picking up a lone Avocet feeding along 186 on the way.  The wetland there was almost down to nothing as well, with just some Mottled Ducks to show for it.  Amy had a nice adrenalin rush when, while continuing north on CR20, I left the nice gravel road and ventured onto the overgrown two-track road (with that nice dip at the beginning J), but the habitat was worth it, as we picked up Common Ground Dove (another lifer), and tried unsuccessfully to pull out more Pyrrs.  Near the area where you can see part of La Sal Viejas, I heard a wobbly Cassin’s Sparrow in the distance and tried to call it in, to no avail…

As we headed west on Ken Baker Road, a kettle of vultures over Rio Beef Feedyard got us out of the car, and as I sifted through them for the coveted Black, Amy suddenly spotted one right overhead!  They mentioned Brewer’s Blackbird would also be a life bird (I had seen reports that they were back in the Valley), so we wheeled into the feedyard, asked permission to go in and look for blackbirds (the only “rule” they ever give me is simply to stay in the vehicle), and away we went, sifting through hundreds of grackles, cowbirds of both flavors (Bronzed was a life bird, too, as they especially liked the “creepy” red eyes J), and Collared Doves, but try as we might, we just couldn’t pull out a Brewer’s Blackbird.  Another little wetland at the end of one lane had a mob of Black-bellied Whistling Ducks and some unidentifiable peeps, and the Cattle Egrets in with a distant herd of cattle was definitely a hit!  The Brahman cattle were almost as fascinating as the icterids to my guests; I had never really paid attention to the humpy backs, the lamb-like ears, and the “baggy knees” before!


There were a couple more lanes we could have poked down, but I think we had all had enough of the flies and the smell (Amy made the comment that farmers back in Pennsylvania will say to you, “What smell??” J), so we continued on Ken Baker Road.  When we got to the T, we still had about 45 minutes before we had to start heading back, so I suggested that if Roadrunner was still high on their list, we could revisit north Brushline rather than visiting other places.  They unanimously agreed, so up we went, and while Amy was enjoying another Scissortail, both Rudy and I suddenly noticed the Roadrunner right in front of the car!  Unfortunately he took off before Amy got a good look, so we snuck up to where he went in the brush and cooed at him, and sure enough, he came right out next to the car!  He then proceeded to circle the car like “Jaws” circled the Orca, and finally flew up to the front, where he put on a great show!  Amy had no idea he’d be so big; she said he looked like the “real” Roadrunner! J


We continued on to the east-west portion and decided to troll for Cactus Wrens at a good cactus patch.  Interestingly, there must have been a Pyrrhuloxia in the background of the recording, as a group came blasting in and finally gave everyone good looks!  While we were there we trolled for Bewick’s Wrens as well (didn’t hear a one along the route), and he came in right away, giving great looks!


Called it a day after that, but on the way home along FM 493 we passed a wetland with some goodies; besides Mottled Ducks and Blue-winged Teal, there was a handful of Long-billed Dowitchers for the day!  Wrapped up with a modest 65 species.  Bird List: